Association of MAGE A1-6 Expression with Lung Cancer Progression

In conclusion, MAGE A1-6 expression of bone marrow in lung cancer patients correlated with poor survival rates. We suggest that MAGE A1-6 may be considered as a novel prognostic factor for lung cancer which leads to effective follow-up and treatment.

The melanoma-associated antigen (MAGE) genes are well known members of cancer/testis antigens (CTA) [5]. Since the first discovery of the MAGE family in 1991, dozens of MAGE members were identified [6]. The MAGE group is divided into two large families e.g. MAGE-I, and MAGE-II, based on functions and expression patterns [7]. The MAGE-I family includes MAGE-A, MAGE-B, and MAGE-C groups, and the MAGE-II family comprises seven subfamilies. While the MAGE-II family is expressed in normal tissues, the MAGE-I group, especially MAGE-A subfamily, is rarely expressed in normal tissue except for the testis, but is highly expressed in various cancer cells [8]. For this reason, MAGE-A becomes a potential biomarker for the various cancers including melanoma [9], head and neck [10], esophagus [11], bladder [12], breast [13], liver [14], and lung [15]. In addition, MAGE-A encodes tumor-specific antigens presented by human leukocyte antigen (HLA) class I molecules to CD8+ T lymphocytes directed against MAGE-A expressing cancer cells, therefore MAGE-I derived peptides attracted attention as targets for anticancer immunotherapy [6].

The expression of MAGE-A might be useful for not only a biomarker for immunotherapy target but also a prognosis factor which leads to effective follow-up and treatment for cancer patients. The diagnostic efficacy of MAGE-A in lung cancer has been already studied in various ways [16]. Detection of MAGE A1-6 from bronchial washing [16], sputum [17], aspirated lung tissue [18] or bone marrow [19] has been studied, and the relationship with prognosis has been suggested. In particular, MAGE A1-6 expressions are known to be related to poor survival rate for cancer patients. In this study, we evaluated the relationship between MAGE A1-6 expression and clinical prognosis in lung cancer.

This study was approved by the Institutional Review Board of Seoul National University Bundang Hospital (B-1104/125-004) and signed consent was obtained from all volunteers.

At the time of surgery, 2 mL of bone marrow was aspirated intraoperatively using an aspiration needle from one rib (5th or 6th rib on the anterior axillary line). The obtained bone marrow was mixed immediately with 10 mL of guanidine isothiocyanate buffer for ribonucleic acid (RNA) preservation and stored at -80℃ in a deep freezer for the analysis.

The χ2-test was used to compare the overall and disease-free survival periods between MAGE A1-6-positive patients and MAGE A1-6-negative patients. Kaplan-Meier survival analysis was also used. Analysis was performed using SPSS ver. 20.0 (Statistical Package for the Social Sciences, Chicago, IL, USA). A statistically significant difference was considered present when the two-tailed p-values were less than 0.05.

Correlation between MAGE A1-6 expression and clinicopathologic data in 60 lung cancer patients. 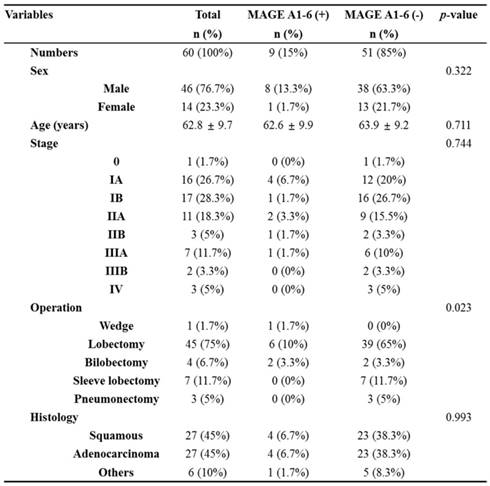 Correlation between MAGE A1-6 expression and survival periods without/with recurrence or distant metastasis. 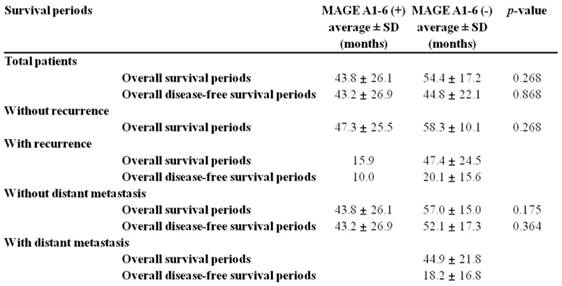 Relevance with recurrence and distant metastasis

Many researchers demonstrated MAGE-A gene expression in various cancers to develop a novel cancer detection tool and an effective immunotherapy target. However, only a few studies reported the correlation between MAGE gene expression and oncologic outcomes. Ogata et al. suggested that MAGE A1 expression can be a predictive maker of poor prognosis in differentiated advanced gastric cancer [21]. Gu et al. demonstrated that MAGE A9 expression suggests unfavorable survival outcome in hepatocellular carcinoma [22]. Lian et al. reported that MAGE A10-11 expression is a potential poor prognostic factor for breast cancer [23], and Noh et al. elucidated that MAGE A1-6 expression in patients with head and neck is correlated with poor oncologic outcomes [24]. In those previous studies, MAGE-A subfamily has been proved to be an unfavorable prognostic factor in various cancers. 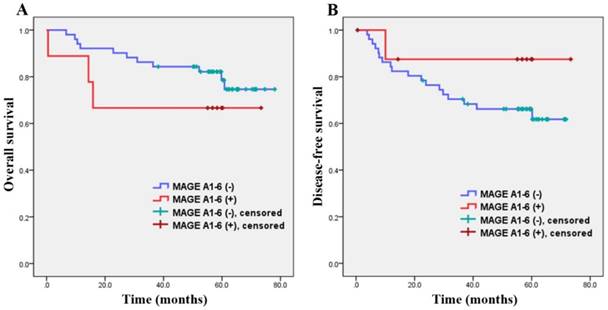 Correlation of MAGE A1-6 expression with recurrence and distant metastasis.

Most investigators used microarray analysis [25], RT-PCR [26], and RNA in situ hybridization [27] for detection of MAGE expression. We applied nested RT-PCR using a MAGE A1-6 common primer, which can detect all MAGE A1-6 subtypes. Since the expression level of individual subtype of MAGE was too low to detect, MAGE A1-6 common primer was designed to increase MAGE detection by binding to the complementary deoxyribonucleic acid (cDNA) sequences of MAGE-1, -2, -3, -4a, -4b, -5a, -5b and-6 (MAGE 1-6) together [20]. This technique was already proved to detect MAGE genes effectively in colorectal [28], head and neck [29], thyroid [30], and lung [31] cancers.

This study has some limitations. First, only 60 patients were enrolled in the study. Since high technique was needed for bone marrow aspiration from the rib, only a small number of patients were enrolled. Furthermore, only 9 of 60 patients (15%) showed MAGE A1-6-positive and it might lead to statistical bias. For further study, we are planning to extend the study period to increase the study population. Secondly, we performed univariate analysis only, because of the small number of MAGE A1-6-positive patients.

MAGE-A groups were thought to be attractive candidates for evaluating cancer diagnosis and treatment. They were also studied as factors indicated of cancer recurrence. Although recent studies achieved great progression in knowledge regarding MAGE families, much of their functions still remain wrapped in enigma. MAGE should be further investigated not only concerning the territory of their pathologic mechanisms, but also in terms of their clinical applications. Our study could represent a tiny step forward to this giant work. We suggest that the correlation between MAGE A1-6 gene expression in bone marrow and lung tissue, bronchial washing or sputum from the same lung cancer patient should be determined for the future study.