Materials and methods: Serum samples were pre-operational collected from 86 patients with gastric cancer from Tianjin Medical University Cancer Institute and Hospital from March 2016 to August 2016. The serum of APE1 was measured by ELISA development kit and other CA242, CA724, CA199 and CEA levels by electrochemiluminescence assay.

Results: The total of 86 patients with gastric cancer was classified into two groups (lymph node positive and negative groups). Using ELISA assay, we found out that the concentration of serum APE1 was higher in lymph node positive group than that of lymph node negative group. The receiver operating characteristic (ROC) curve was performed to analyze, indicating that area under the ROC curve of serum APE1 were better than those of each regular markers (CEA+CA199+CA242+CA724) or combination of these markers. Additionally, the APE1 overexpression was uncovered in tissue of gastric cancer patients with lymph nodes metastases, which is correlation with results of serum APE1.

Conclusion: Serum APE1 was identified as a valuable marker for prediction of lymph node metastases in patients with gastric cancer.

Apurinic/apyrimidinic endonuclease (APE1) is a multifunctional protein, which is not only involved in DNA damage repair but regulates redox activity related to kinds of tumor occurrence and development [1]. Our previous study indicated that APE1 overexpression was associated with poor prognosis of non-small cell lung cancer and enhanced epithelial-Mesenchymal Transition (EMT) of lung cancer cell in vitro and in vivo [2]. Other study also reported that APE1 inhibitor was able to suppress gastric cancer cell migration and invasion in combination with 5-Fu treatment [3]. Moreover, APE1 serum protein has been screened as candidate biomarkers for lung cancer in prediction of chemotherapeutic efficacy [4].

Gastric cancer is one of most high mortality carcinoma in patients with poor prognosis [5]. Screening early and efficacy biomarkers is critical for physicians to predict gastric cancer patients' metastasis and prognosis [6]. Potential new serum maker candidates include vascular endothelial growth factor, cytokines and growth factors and other independent clinical prognostic predictors [7]. Serum autoantibodies used as biomarkers are highly stable in blood, such as serum Her-2, serum Helicobacter pylori KatA and AhpC antibodies, for novel biomarkers in gastric cancer [8]. Our study found that APE1 protein overexpression is associated with poor overall survival of gastric cancer patients [3]. In this study, based on our previous results, we aim to explore the relationship between serum APE1 expression and gastric cancer lymph nodes involvement [3]. We investigate the role of serum APE1 in further prediction of gastric cancer metastasis and prognosis.

DNA damage repair plays important roles in maintaining genomic stability but increases the progression in cancer development. APE1 protein is seen as one of the essential DNA repair proteins involving in cell survival and other carcinogenesis [1]. Abnormally abundant APE1 has been identified expression in serum in NSCLC in previous study [9]. To our knowledge, the function of serum APE1 in prediction of prognosis in gastric cancer is less clear. In our study, using ELISA assay, we speculate that serum APE1 might be correlation with diagnostic efficacy and lymph node metastases in gastric cancer patients.

The study was approved by the Research Ethics Committee of Tianjin Medical University Cancer Institute and Hospital. Informed consent was obtained from all of the patients. All specimens were handled and made anonymous according to ethical and legal standards. Serum samples were collected before operation from 86 patients with gastric cancer in Tianjin Medical University Cancer Institute and Hospital from March 2016 to August 2016. All patients with clear gastric cancer pathology did not receive neoadjuvant chemotherapy, radiation therapy, or immunotherapy before surgery. Table 1 summarizes the clinicopathological data of these patients with gastric cancer.

The characteristics of patients with gastric cancer for serum APE1examination

CA242, CA724, CA199 and CEA levels were obtained from medical records during the inpatient periods. Measurement of Human apurinic/apyrimidinic endonuclease 1 (APE1) using ELISA development kit (abbexa company, Cambridge, UK) was used to measure APE1 levels in human serum; 96-well ELISA microplates were coated overnight with 100Μl of APE1 antibody at a final concentration of 0.25 mg/L in phosphate-buffered saline (PBS). After washing with 0.05 % (w/v) Tween-20 in PBS (PBST, pH 7.4), the wells were blocked with blocking buffer at room temperature for 1 h. Then, 100μL of diluted serum samples (1:5 dilutions) were added and incubated at room temperature for 2 h. Similarly, 100μL of PBST lacking antibody was used as a negative control. Following three washes with PBST, 100μL of antibody diluted to a concentration of 0.25 mg/L was added. After incubation at room temperature for 2 h, 100μL of avidin-horseradish peroxidase-conjugated secondary antibody (1:2000 dilutions) was added, and plates were incubated at room temperature for 30 min. The excess conjugate was removed by washing the plates three times with PBST. The amount of bound conjugate was determined by adding ABTS liquid substrate solution to each well, and plates were incubated at room temperature for color development. The absorbance was measured at 405 nm using a Model 680 microplate reader (Bio-Rad Lab. Inc., Hercules, CA, USA). All analyses were performed in triplicate. The coefficient of variation was lower than 15 % between analyses.

In the IHC staining assay, the protocol of previous study was followed (3). The primary antibody against APE1 (Cell signaling, MA) was used for samples staining.

Statistical significance was determined with the nonparametric Mann-Whitney U test (for differences between two groups) with SPSS 16.0 software. The receiver operating characteristic (ROC) curve was made using Medcalc software. Values of p<0.05 were considered statistically significant.

Characteristics of patients with gastric carcinoma

Table 1 showed that the characteristics of 86 patients with gastric carcinoma in Tianjin cancer hospital. The stage, TNM and tumor location, Her-2 status in lymph node positive and negative groups were all analyzed. 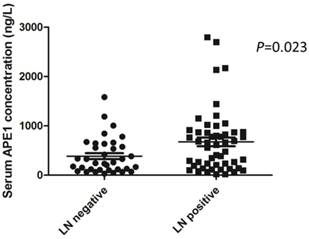 Although serum APE1 was found out to be effective maker for prediction of lymph node metastases, other serum makers (CEA, CA199, CA242 and CA724) has been presented as regular makers for gastric cancer diagnosis. In our study, we compared serum APE1 and other makers to investigate the diagnostic performance of serum APE1 in diagnosis of gastric lymph node metastases. The receiver operating characteristic (ROC) curve of serum APE1 were better than those of other markers (Figure 2). As Table 2 shown, the specificity of APE1 (85.7%) was higher than CA242, CA724 and CEA (37.1%, 57.1% and 82.9%), but lower than that of CA199 (97.1%) in prediction of lymph node metastases. The cutoff value of APE1 was analyzed as 660.2. However, we found that serum APE1 has better diagnostic performance than that of each markers and even combination of other four markers (CEA+CA199+CA242+CA724) (Figure 3). These data indicated that serum APE1 not only predicates lymph node metastases in gastric cancer but contributes to good performance in diagnosis.

The diagnostic value of APE1, CA199, CA242, CA724 and CEA in prediction of gastric cancer with lymph node metastasis 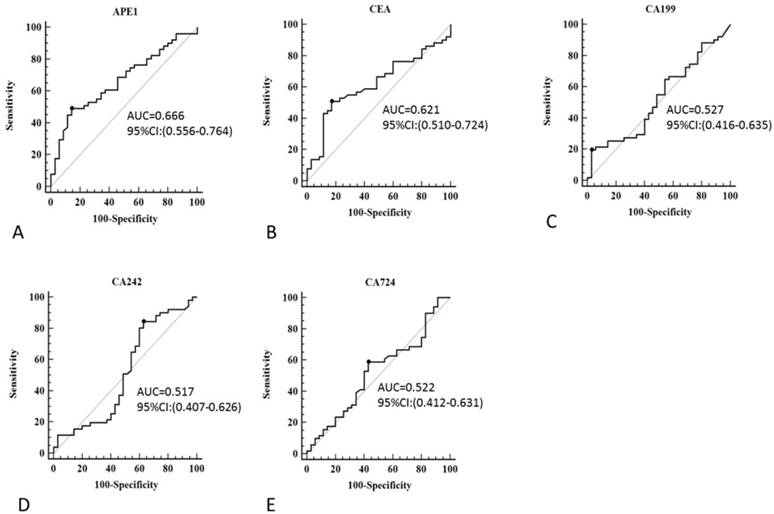 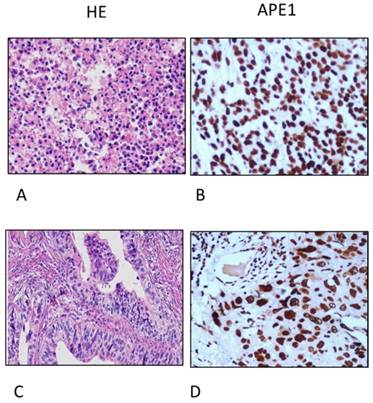 Gastric carcinoma develops from the lining of stomach and spreads to other parts of the body, such as lymph nodes, liver, lungs and bone [10]. The diagnosis of gastric cancer was done by biopsy with endoscopy. The screening effort will reduce poor prognosis of advanced gastric cancer. The four serum cancer markers, such as CEA, CA199, AFP and CA125, has been examined as the prognostic value in gastric cancer patients [11]. In our study, we investigated the role of serum APE1 in prediction of lymph node metastases in gastric cancer.

APE1 has two different functions, DNA repair and redox activity, which is beneficial to cellular process and biological development [12]. A researcher from Japan first reported APE1 autoantibodies in serum from systemic lupus erythematosus patients [13]. APE1 has been identified to be an ectopic protein from tumor tissue into serum. Wang et al. reported that APE1 autoantibodies by indirect ELISA are monitored in NSCLC patients' blood to be a potential tumor marker [9]. Another study showed APE1/Ref-1 to be a potential bladder cancer biomarker in patient's urine for clinical diagnosis of bladder cancer [14]. One research group uncovered extracellularly secreted APE1/Ref-1 triggers apoptosis in triple-negative breast cancer, indicating its secretion into the circulation probably through secreted formation from intracellular into extra circulation. In our study, we tested serum APE1 in patients with gastric cancer before operation. After grouping into lymph node positive and negative cohorts, we found out that the average value of serum APE1 is higher in gastric cancer with lymph node metastases than control group. To investigate the diagnostic performance of serum APE1 using ELISA detection, the serum CEA, CA199, CA242 and CA724 were compared. The data from ROC curve showed that the diagnostic value of serum APE1 was better than each regular serum markers, and even than combination of these four markers. In this case, we concluded that serum APE1 has good diagnostic performance in patients with gastric cancer with lymph node metastases.

The APE1 expression in 129 patients with gastric cancer in primary site (86) and lymph node metastasis (14) and No value (29) analyzed from TCGA dataset. 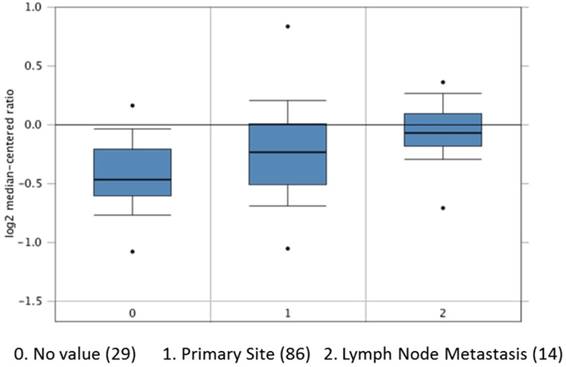 12. Demple B, Herman T, Chen DS. Cloning and expression of APE, the cDNA encoding the major human apurinic endonuclease: definition of a family of DNA repair enzymes. Proceedings of the National Academy of Sciences of the United States of America. 1991;88(24):11450-11454