Gene Signal Distribution and HER2 Amplification in Gastroesophageal Cancer

Background: HER2 serves as an important therapeutic target in gastroesophageal cancer. Differences in HER2 gene signal distribution patterns can be observed at the tissue level, but how it influences the HER2 amplification status has not been studied so far. Here, we investigated the link between HER2 amplification and the different types of gene signal distribution.

Methods: Tumor samples from 140 patients with gastroesophageal adenocarcinoma where analyzed using the HER2 IQFISH pharmDx™ assay. Specimens covered non-amplified and amplified cases with a preselected high proportion of HER2 amplified cases. Based on the HER2/CEN-17 ratio, specimens were categorized into amplified or non-amplified. The signal distribution patterns were divided into homogeneous, heterogeneous focal or heterogeneous mosaic. The study was conducted based on anonymized specimens with limited access to clinicopathological data.

Conclusions: A clear relationship between HER2 amplification and the focal heterogeneous signal distribution was demonstrated in tumor specimens from patients with gastroesophageal cancer. Furthermore, we raise the hypothesis that the signal distribution patterns observed with FISH might be related to different subpopulations of HER2 positive tumor cells.

Amplification of the human epidermal growth factor receptor 2 (HER2) gene and overexpression of the HER2 protein is found in a number of human cancers, including breast and gastroesophageal cancer. The gene for HER2 (also known as ErbB-2, c-erbB2 or Her2/neu) is a proto-oncogene located on the chromosome 17q. This gene encodes a 185-kDa transmembrane tyrosine kinase receptor protein that is a member of the human epidermal growth factor receptor family, which consists of HER1 (EFGR), HER2, HER3, and HER4. HER2 forms both homo- and heterodimers with the different members of the HER family, thereby serving as a critical dimerization partner, which leads to activation of downstream signaling pathways associated with cell proliferation, differentiation, survival and angiogenesis (1, 2). Amplification of the HER2 gene in gastric cancer was first described in 1986, and since then a large number of studies have confirmed this finding (2, 3).

In both gastroesophageal and breast cancer HER2 serves as an important therapeutic target. For gastroesophageal cancer, the clinical utility of HER2 targeted therapy was demonstrated in the ToGA trial, in which HER2-positive patients with advanced disease were randomized to receive 5-FU/capecitabine and cisplatin, either alone or in combination with trastuzumab (Herceptin®, Roche/Genentech). A clinically relevant and statistically significant gain in overall survival was observed in patients who received the combined treatment of trastuzumab plus chemotherapy (4). Based on the positive results from the ToGA trial, HER2 testing of gastroesophageal cancer patients is now routinely performed in most pathology laboratories where both immunohistochemistry (IHC) and fluorescence in situ hybridization (FISH) assays serve as companion diagnostics for trastuzumab. In general, a positive HER2 status is found in approximately 15% to 20% of patients with gastroesophageal cancer (2).

Due to the differences in tumor biology, HER2 testing in gastroesophageal cancer with IHC and FISH differs from breast cancer. The gastric cancer tissue more frequently shows HER2 heterogeneity and incomplete membrane staining, and consequently a specific gastric cancer scoring system is used (5,6,7). In the ToGA trial, HER2 positivity was defined as being either IHC3+ or FISH+ (HER2/CEN-17 ≥ 2.0), and based on the results from this study, a specific testing algorithm was developed. Here, IHC is regarded as the primary test, with FISH as a reflex test in borderline cases of IHC2+. However, as almost all patients in the ToGA trial had a FISH and IHC test performed, the US FDA recommends that both IHC2+ and IHC3+ cases are reflex tested with FISH (8).

A total of 140 formalin-fixed, paraffin-embedded (FFPE) gastroesophageal adenocarcinoma specimens were included in the study, which covered both resections and biopsies. All specimens were residual, de-identified FFPE blocks originating from individual patients and were prepared according to the IFU for the HER2 IQFISH pharmDx assay and subsequently cut in serial sections of 4μm and mounted on glass slides (9). The specimens were obtained from commercial providers or local hospitals and the patient identities were not traceable. For each specimen, a pathologist identified the tumor area, which was indicated directly on a hematoxylin and eosin stained slide. Inclusion criteria were not related to signal distribution in the specimens, but acceptable tumor morphology and signal quality was required for inclusion. Additionally, specimens were included to represent comparable numbers of HER2 amplified and non-amplified cases as well as comparable numbers within the HER2 protein expression levels 0/1+, 2+ and 3+ (see Table 1) as determined by HercepTest™ according to the manufacturer's recommendations. The study was conducted in accordance with the current version of the World Medical Association Declaration of Helsinki. The study protocol was not submitted to an Ethics Committee (EC) as this type of analytical study in Denmark is exempt from EC approval. The specimens in the study were part of an internal validation study where the HER2 IQFISH pharmDx assay was compared to an automated version of the assay (Dako Omnis) (10).

HER2 IQFISH pharmDx and fluorescence microscopy

The gastroesophageal tumor specimens were stained manually with the HER2 IQFISH pharmDx assay, which contains all key reagents required to complete a FISH procedure. Briefly, the cut specimen sections were exposed to heat pre-treatment using a microwave oven, and were then digested with pepsin at 37 °C to prepare the tissue for probe hybridization. Co-denaturation of probe and tissue target DNA was performed for 10 minutes at 66 °C followed by hybridization at 45 °C for 90 minutes using a Hybridizer (Agilent Technologies). The hybridization was performed using the RTU HER2/CEN-17 FISH Probe Mix based on a combination of a Texas Red-labeled DNA probe (HER2) and a fluorescein-labeled PNA probe (CEN-17). Following hybridization, specimen sections were subjected to stringent wash at 63 °C for 10 minutes before dehydration and drying. Dried slides were subsequently mounted using Fluorescence Mounting Medium containing 4',6-diamidino-2-phenylindole (DAPI) and cover slipped. The HER2 IQFISH stained slides were evaluated and enumerated using a fluorescence microscope equipped with 20×, 40× and 100× objectives and appropriate fluorescence filters for detection of the Texas Red labeled HER2 DNA and fluorescein labeled CEN-17 PNA probe signals (9, 11). Images were captured on an Olympus BX63 fluorescence microscope equipped with a DP73 camera using an Omega fluorescein / Texas Red dual band filter.

Tabulation of gastric cancer specimen location, type and HercepTest score by HER2 status. The HER2 status was determined according to the manufacturer's instructions for manual HER2 IQFISH pharmDx.

The assessment of the gene signal distribution was performed by locating the tumor within the context of the H&E stained slide and evaluating the same area on the FISH stained slide and subsequently determine the overall signal distribution (homogenous or heterogeneous). In case of heterogeneous signal distribution, it was then determined whether focal or mosaic distribution was present. The HER2/CEN-17 ratio was calculated based on the enumeration of 20 nuclei from the invasive tumor area. Based on this ratio, the specimens were categorized into amplified (HER2/CEN-17 ≥ 2.0) or non-amplified (HER2/CEN-17 < 2.0) HER2 status. Specimens with a ratio between 1.8 and 2.2 (borderline cases) were subjected to enumeration of additional 40 nuclei and the ratio was then recalculated for these 40 nuclei to determine if HER2 amplification was present or not. In every stained section the presence of 1-2 clearly visible red and green signals in normal cells served as an internal quality control of the staining reaction (9, 11).

The gastric cancer specimens examined in this study are primarily from the stomach region (81%) with the remaining specimens from the gastroesophageal junction (19%) (Table 1). The majority of specimens are resections (93%) and a minor fraction are biopsies (7%) (Table 1).

Mean, median, 95% confidence limits and N for HER2/CEN-17 ratios by signal distribution pattern. The HER2/CEN-17 ratio was determined according to the manufacturer's instructions for manual HER2 IQFISH pharmDx. 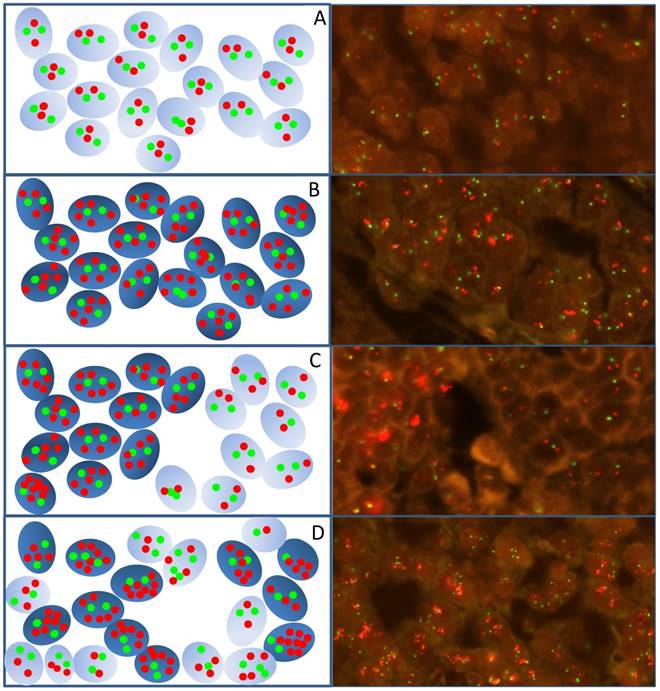 Plot of HER2/CEN-17 ratios (N=140) determined by HER2 IQFISH pharmDx™ staining of the gastric cancer specimens by signal distribution group. All specimens are illustrated in A) and in B) specimens up to a HER2/CEN-17 ratio of 4.0 are plotted. Blue data points indicate non-amplified HER2 status and red data points indicate amplified HER2 status. Random jittering by SAS JMP was included to better visualize overlying or nearby data points. 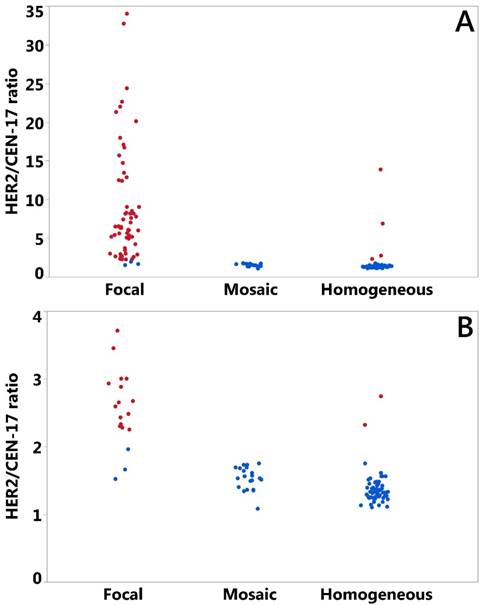 Different HER2 signal distribution patterns can be observed in tissue specimens from patients with gastroesophageal cancer; however, what this means in relation to HER2 amplification has not been studied systematically so far. In the current study, we investigated the relationship between HER2 amplification and the different signal distribution patterns in tumor specimens from patients with gastroesophageal cancer.

HER2 overexpression is a well described driver of carcinogenesis that has been shown to impair cellular organization by disrupting cell polarity and cellular adhesion (15), to promote cellular migration and invasion (16), and also to lead to uncontrolled proliferation by interference with cell cycle regulators such as cyclin D1 and p27 (17). There is also indication that HER2 overexpression via HER2-HER3 heterodimer formation leads to transformation involving activation of the PI3K/Akt and MAPK pathway (18, 19). The effect of HER2 overexpression on cancer cell phenotype and growth properties in tumors has been shown to depend on activation of SH2 domain containing proteins such as src-kinase, that is known to regulate integrin signaling and focal adhesions (20). Interestingly, src kinase inhibition in HER2 overexpressing breast tumor cells has revealed different growth phenotypes ranging from inhibition of invasiveness to complete growth inhibition (19).

Intra tumor heterogeneity and tumor aneuploidy are important mechanisms for development of drug resistance (21), and tumor characterization or stratification by in situ hybridization techniques offer the possibility to combine genetic/chromosomal information with spatial phenotypic characteristics of tumors. In this dataset, the observation that a characteristic tumor growth pattern in gastric cancer is linked to HER2 amplification could suggest that the HER2 positive tumor cells are mainly dominant with respect to the focal growth pattern. In a recent study of intra-tumor heterogeneity of breast cancers, the HER2 amplified and HER2 non-amplified genetic components were investigated using copy number profiling and sequencing (22). It was found that HER2 gene amplification was heterogeneously distributed within a given tumor, and it was also observed that alternative driver genetic alterations between the HER2 amplified and HER2 non-amplified part of a given tumor differed. Therefore, we speculate that the intra-tumor phenotypic difference in cancer growth exemplified by the variable signal distribution patterns of gastric cancer cells could be attributed to underlying genetic heterogeneity.

If we assume that the different signal distribution patterns represent different subtypes of HER2 positive cells, the next step would be to speculate about the clinical impact. Currently, trastuzumab is the only approved HER2-targeted drug for treatment of HER2 positive gastroesophageal cancer, and far from all patients respond adequately (4, 23, 24). In order to achieve a higher predictive value of the current ISH tests, determination of the signal distribution patterns might be a supplement that could increase the value of these tests. Likewise, as a number of new HER2 targeted compounds, both small molecules as well as antibodies, are under development, the signal distribution patterns might help to improve the predictability of these new drugs (8). These questions will need to be addressed in future studies.

As the current study was performed based on anonymized specimens no or very few clinicopathological patient characteristics have been available. This should be considered a drawback and the possibilities of doing different exploratory analyses are limited. However, taken these limitations into consideration the study has been able to demonstrate a clear relationship between HER2 amplification and the focal heterogeneous signal distribution in patients with gastroesophageal cancer. Furthermore, based on the phenotypical characteristics of the different signal distribution patterns we have raised the hypothesis that the related HER2 positive tumor cells might belong to different subpopulations. In the literature, it has been suggested that HER2 overexpression and/or amplification might be one of the molecular abnormalities linked to the development of gastric cancer (19, 25, 26). If and how the HER2 signal distribution patterns play a role in cancer development further research may show.

The publication was supported by a grant from the Dx-Rx Institute, Fredensborg, Denmark.

Jan Trøst Jørgensen has worked as a consultant for Agilent Technologies and Euro Diagnostica, and has given lectures at meetings sponsored by AstraZeneca, Merck Sharp & Dohme, and Roche. Karsten Bork Nielsen, Gitte Kjærsgaard, Anna Jepsen, and Jens Mollerup are employees of Agilent Technologies.