Background: Programmed death ligand-1(PD-L1) functions as a negative mediator of immune response through different pathways in anti-tumor immunity. Recent studies have reported that PD-L1 plays a pivotal role in the function of regulatory T-cells (Tregs). Although increases in FOXP3+ Tregs infiltration and PD-L1 expression have been revealed in several cancers, their correlation with soft tissue sarcoma remains unknown.

Methods: We included 163 cases of soft tissue sarcoma who were diagnosed and underwent extensive and radical resection at the Sun Yat-sen University Cancer Center, Guangzhou, China, from 2000-2010. PD-L1 and FOXP3 expression was evaluated by immunohistochemistry. Correlation between their expressions and associations with clinicopathological features were studied.

Conclusions: Our study revealed that PD-L1 and FOXP3+Tregs may work synergistically in promoting immune evasion of the tumors in soft tissue sarcoma. A combined strategy to block PD-L1/PD-1 with simultaneous depletion of Tregs may show promise in enhancing the therapeutic efficacy of these patients.

Soft tissue sarcomas (STSs) are a group of rare neoplasms of mesenchymal origin and account for approximately for 1.5% of all human malignancies [1]. Primary treatments for STS include surgical resection with or without adjuvant radiation; however, the 5-year probability of local recurrence and metastasis remains high [2, 3]. Response to conventional chemotherapy and radiation therapy varies. Some subtypes are sensitive to conventional chemotherapy and radiation therapy, while other subtypes are strongly resistant. Thus far, immunotherapy is considered the foremost method in individualized medicine and has recently achieved tremendous success in melanoma, lung cancer, and renal cell cancer [4-6]. Understanding how immunology relates to sarcomas may reveal the potential for immunotherapy to be effectively used in the treatment of sarcoma.

PD-L1 (also known as B7-H1) is an identified member of the B7 family. PD-L1 is expressed on immunocompetent cells such as T cells, B cells, dendritic cells (DCS) and macrophages [7]. Overexpression of PD-L1 in tumors has been shown to inhibit T-cell activation and proliferation while inducing apoptosis in the T-effector cells, leading to diminished immune responses and the impairment of protective immunity against cancer [8, 9]. Thus, PD-L1 functions as a negative mediator of immune response through various pathways in anti-tumor immunity. Recently, PD-L1 expression has been studied to predict clinical response in several cancers [10-12]. However, its expression and impact on the prognosis of patients with STS is not well studied and remains controversial [13, 14].

Regulatory T cells (Tregs) are a subset of T lymphocytes that possess a capacity to suppress the proliferation and cytokine secretion of effector T lymphocytes. This unique subset of CD4+ helper T cells is characterized by the CD4+CD25+phenotype. FOXP3, a forkhead helix transcription factor, appears to function as a master regulator in the development and control of Tregs [15, 16], and it has been regarded as the most specific and reliable surface marker of Tregs [17]. Furthermore, Tregs has been found in a number of human tumors and is considered a biomarker and prognostic factor for human malignant tumors [18, 19]

PD-L1 has been confirmed to play a critical role in the development and functional maintenance of Tregs. Francisco demonstrated that PD-L1 can inhibit T cell responses by converting naive CD4 T cells to iTreg cells, indicating that PD-L1 has a pivotal role in regulating induced T reg(iTreg) cell development and sustaining iTreg cell fuction[20]. Wang et al. demonstrated that blocking PD-L1 signaling abolished induction in a tumor-induced Treg conversion model in vivo [21]. Although the infiltration of FOXP3+Tregs and PD-L1 expression have been reported in patients with gastric cancer, colorectal carcinoma and breast cancer [22-24], their relationship to soft tissue sarcoma has not been evaluated.

We included 163 cases of soft tissue sarcoma who were diagnosed and underwent extensive and radical resection at the Sun Yat-sen University Cancer Center, Guangzhou, China, from 2000 to 2010. Written informed consent was obtained from each patient. Ethical approval was given by the medical ethics committee of Sun Yat-sen University Cancer Center IRB. The patients were followed up for 1-176 months, with a median of 75 months, and the median age of patients at resection was 39 years (range 5-77 years). No patients had received preoperative chemotherapy or preoperative radiation therapy. Adjuvant chemotherapy was administered in 29 patients (17.8%), and adjuvant radiotherapy treatment was administered in 64 patients (39.3%). Doxorubicin-based combination chemotherapy regimens were mostly used in patients with postoperative chemotherapy. Patients with stage IV disease and a single resectable metastasis were qualified for surgery. Disease staging was classified according to the American Joint Committee on Cancer (AJCC) 7th Edition and tumors were graded according to the French Federation of Cancer Centers Sarcoma Group grading system.

Tumor tissues were fixed with formalin and embedded in paraffin. Immunohistochemical staining was conducted on the paraffin-embedded, 4-mm thick sections of the specimens. Each section was dewaxed and rehydrated using xylene and washed with graded alcohol. Antigen retrieval was performed for 2.5 min using EDTA buffer (pH 9.0). The sections were incubated with a primary antibody against PD-L1 (CST, E1L3N, monoclonal, 1:100 dilution), FOXP3(Abcam, ab20034, monoclonal, 1:300 dilution) for 16 h at 4℃。The sections were then incubated with goat secondary antibody molecules against rabbit and mouse immunoglobulins (DAKO). The substrate system contains 1-5% 3,3'-diaminobenzidine tetrahydrochloride.

Positive expression was evaluated independently by two pathologists. PD-L1 positivity was defined as >1% of tumor cells (minimum of 100 evaluable cells) demonstrating membrane staining. The percentage of FOXP3+ cells was calculated by dividing the total number of each respective cell type by the total number of cells present in each tissue section. For FOXP3 a cut-off of 5% was used to distinguish high density versus low-density cells.

All analyses were performed using the SPSS statistical software package (SPSS statistic 17.0). Associations between clinical and histo-pathological parameters with PD-L1 expression or FOXP3 expression were evaluated using χ2 or Fisher's exact test. The Kaplan-Meier method and log-rank test were used to estimate the distribution of DFS and OS by the PD-L1 positivity and FOXP3 positivity. Hazard ratios (HRs) estimated from the Cox analysis were reported as relative risks with corresponding 95% confidence intervals (CIs). Spearman's rank correlation test was used to assess the association of PD-L1 expression with FOXP3+Treg infiltration and clinic-pathological characteristics. All tests were two-sided, and a P value of less than 0.05 was considered statistically significant.

The association of PD-L1 positivity or FOXP3+ Treg infiltration expression with variable clinicopathological factors of STS is summarized in Table 1 and Table 2. PD-L1 was expressed mainly in tumor cells and FOXP3 was expressed in tumor infiltrating lymphocytes. Representative positive cases of PD-L1 or FOXP3 immunostaining in various STS are shown in Figure 1. 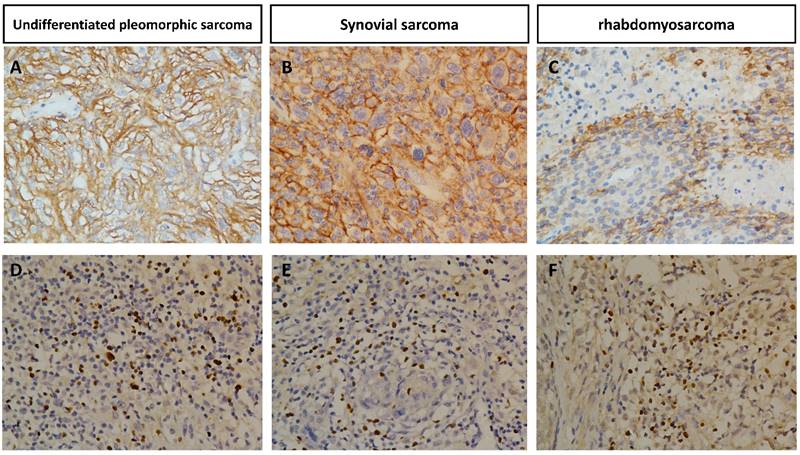 When additional analysis was performed in the subtype group of STS patients, PD-L1 expression, FOXP3+ Tregs infiltration, and PD-L1/FOXP3 were significantly associated with OS in the undifferentiated pleomorphic sarcoma patients (Figure 3). Factors including tumor grade, tumor size, tumor depth were significantly correlated with both OS and DFS in univariate analyses. 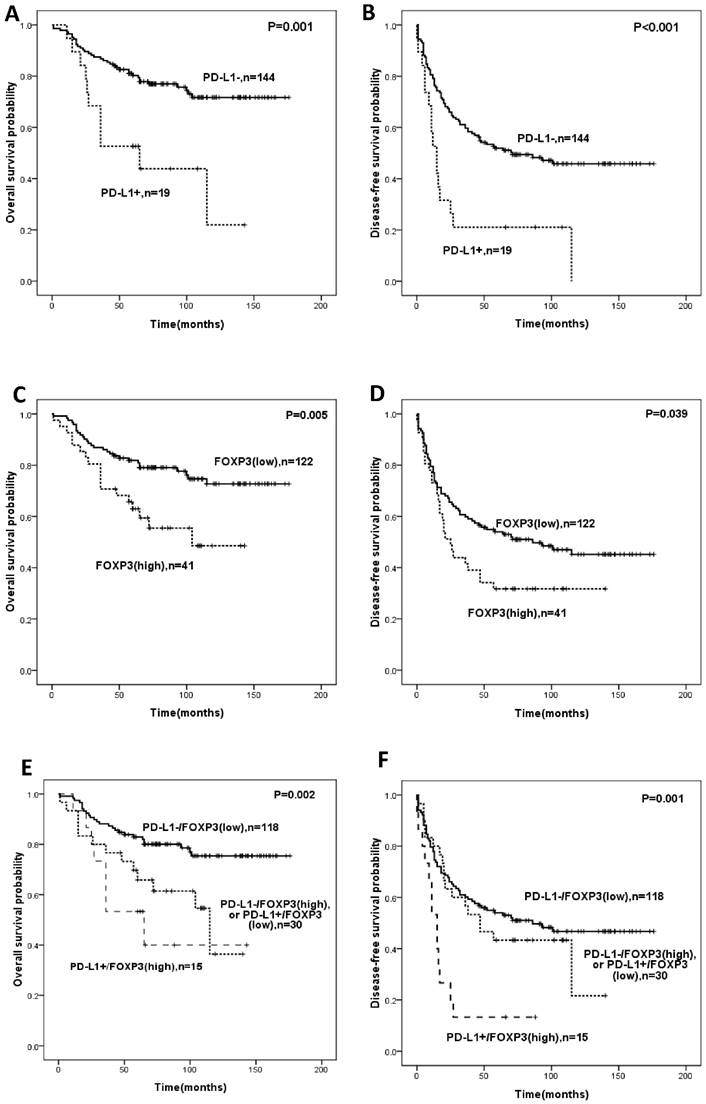 Overall survival analysis in undifferentiated pleomorphic sarcoma patients according to expression of PD-L1 (A), FOXP3 (B)and the combined expression pattern of PD-L1 and FOXP3 (PD-L1/FOXP3) (C).

Correlation of PD-L1 and FOXP3 RNA expression in sarcoma 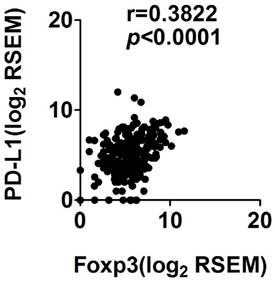 Tumor cells can be recognized and attacked by antigen-specific T cells. PD-L1, a co-inhibitory molecule, plays a pivotal role in inducing cancer cell immune evasion by binding to its receptor PD-1[25]. Recently, PD-L1 has been considered to be a predictor of unfavorable clinical outcome in a variety of malignancies [26-28]. The role of the programmed death-1(PD-1/PD-L1) in STS is controversial. Kim recently reported that in STS tumors expressing PD-L1, up to 65% were associated with poorer prognosis and more aggressive progression of disease. These findings suggested that PD-L1 staining may be a viable biomarker for prognosis, and suggest the use of anti-PD-1 treatment as an effective strategy for treatment [13]. However, D' Angelo reported that PD-L1 tumor expression was noted in 12% of tumors with majority being gastrointestinal stromal tumors (GIST)[14]. Additionally, in contrast to the work of Kim et al., PD-L1 tumor expression did not correlate with aggressive features nor with clinical outcome.

In our study, we collected additional samples (163) and used whole-tissue sections for reliable observation in immunohistochemistry. We observed PD-L1 expression in 11.7% of the samples and found significant association with clinical outcome. Most of the specimens of our study were the primary tumors prior to metastatic progression; thus, the tumor immune microenvironment may be different from other studies. Additionally, the subtypes we analyzed are distinct and heterogeneous which indicating the variable results [29, 30].

Numerous lines of evidence have shown that the PD-L1/PD1 pathway is correlated with the maintenance of immune microenvironment. PD-L1 expression has been investigated in osteosarcoma via quantitative real-time RT-PCR, which indicated that high PD-L1 expression was associated with the presence of TILs (p=0.01) [31]. Several studies have suggested that PD-L1 plays a pivotal role in sustaining the function of iTregs in some autoimmune diseases but not in cancers. For instance, PD-L1 was found to upregulate FOXP3 expression and modulate the signaling molecules that are critical for conversion of naive T cells to Treg cells [32-34]. The same study indicated that PD-L1 expression was associated with FOXP3 expression and suggested that PD-L1 expression combined with FOXP3 expression could be an independent prognostic indicator in STS. As we have seen, our study is first to show the correlation of PD-L1 expression in sarcoma cells and FOXP3+ Treg infiltration. In addition, our results are the first to indicate a significant role of PD-1/PD-L1 signals in immune suppression through the regulation of Tregs in soft tissue sarcoma. Although PD-1 pathway has been previously reported to correlate with Tregs development and function [35, 36], the accurate mechanism still needs to be illuminated.

Because FOXP3+ Tregs and PD-L1 could counteract anti-tumor immune responses, a combined strategy based on the depletion of Tregs and the inhibition of PD-L1 may be developed to enhance therapeutic efficacy against soft tissue sarcoma. Preclinical work in implanted fibrosarcoma mouse models has shown anti-tumor activity of anti-PD-1 therapy [37]. An open-label phase II trial (SARC028) of anti-PD-1 monotherapy utilizing pembrolizumab in patients with advanced bone and soft tissue sarcomas will be the first clinical trial exploring the role of anti-PD-1 therapy and is currently undergoing patient enrolment stages. Ipilimumab, an agent that works on anti-cytotoxic T lymphocyte-associated protein 4(CTLA-4), contributes to the depletion of regulatory T cells. A pilot phase II study with ipilimumab was performed in NY-ESO-1 expressing advanced synovial sarcoma patients [38]. This trial was stopped early due to slow accrual and lack of immune response. Of note, the results might be interpreted as RECIST may not be the best criterion when using immune checkpoint inhibitors. Furthermore, perhaps CTLA-4 inhibition alone is not enough to elicit an anti-tumor response, but combination with other therapies may make a difference.

In conclusion, we found that both PD-L1 and FOXP3 exhibit high expression levels in patients with poor prognosis in soft tissue sarcoma. The combined evaluation identified that patients with the positive PD-L1 expression and high FOXP3+ Treg infiltration had the worst prognosis. Thus, a combined strategy to block PD-L1/PD-1 axis with simultaneous depletion of Tregs may show promise in enhancing the therapeutic efficacy of these patients.

We declare no conflicts of interest.