Background: The long non-coding RNA Linc00152 stimulates tumor progression in cancer. However, its clinical significance and biological functions in lung adenocarcinoma remains unknown. We evaluate the expression of Linc00152 in lung adenocarcinoma and its possible correlation with clinicopathologic features and patient survival to reveal its biological effects in cancer progression and prognosis.

Methods: Total RNA extraction was performed on 110 pairs of lung adenocarcinoma and adjacent normal tissue samples, and then RT-qPCR was conducted. Chi-square test analysis was used to calculate the correlation between pathological parameters and the Linc00152 mRNA levels. Kaplan-Meier and Cox proportional hazards analyses were used to analyze the overall survival (OS) and disease-free survival (DFS) rates. We also detected the potential functional effects of overexpression and knockdown of Linc00152 in vitro cell proliferation, tumor cell invasion and migration, as well as in vivo nude mouse xenograft and metastasis models.

Lung cancer (LC) is the leading cause of cancer-related mortality in the world as the top 1 cause of cancer mortality each year in China [1]. The most common histological type of non-small cell lung carcinoma (NSCLC) is lung adenocarcinoma, accounting for 70% of NSCLC and nearly half of all lung carcinoma [2]. Identifying genes that participate in GC biology is critical to improve clinical practice.

The non-coding RNAs with sizes larger than 200 nucleotides (long non-coding RNAs, lncRNAs) are reported to play critical roles in somatic malignancies [3]. Dysregulation of lncRNA expression is associated with lung tumor tumorigenesis, recurrence and metastasis [4, 5]. Exploration of potential lncRNAs related to the pathogenesis of lung adenocarcinoma would be illuminative to future therapeutic strategies of lung cancer [6].

The non-coding RNA Linc00152 is a newly found lncRNA and has been reported to be involved in tumor initiation and progression [7]. Our former study revealed that Linc00152 promotes renal clear cell progression and predicts poor prognosis [8]. Other studies have got similar findings in gastric cancer [9] and hepatic carcinoma [10], which suggests that Linc00152 might serve as a powerful oncogenic lncRNA in somatic malignancies. However, the correlation between Linc00152 expression and tumorigenesis of lung cancer remains elusive.

A total of 110 patients who underwent surgical resection of primary lung adenocarcinoma at Fudan University Shanghai Cancer Center from 2009 to 2012 were retrospectively analyzed. No patients had received preoperative therapy. The resected cancer tissue and adjacent normal tissue (ANT) samples were frozen in liquid nitrogen immediately and stored at -80 °C until RNA extraction. The related data including age, gender, tumor location, size, histologic stage, lymph node status, remote metastasis and recurrence were collected from the medical record system. All patients were staged based on the TNM classification system. Patient follow-ups were performed every month during the first year after surgery and every 3 months thereafter until August 31, 2016. All patients had complete follow-up information. The Clinical Research Ethics Committee of Fudan University Shanghai Cancer Center approved the study. Written informed consent was obtained from all of the participants for the use of their tissues in the current study.

The full-length Linc00152 sequence was amplified by PCR from cDNA of NIH: H293 cells and then subcloned into the pcDNA3.1 (+) vector (Transheep, Shanghai, China). pHBLV-IRES-puro lenti-virus was constructed by Hansheng (Shanghai, China). The information of shLinc00152 was listed in the previous article [8].

Cells were seeded in 96- or 6-well plates 24 h prior to the experiment. After infected with indicated lenti-virus, proliferation was measured using the CCK-8 (Dojindo, Japan) and the colony-forming assays. The CCK8 assay counts living cells at different time points. Approximately 3.5×103 infected cells in 100 µl were incubated in triplicate in 96-well plates. The CCK-8 reagent (10 µl) was added to each well and incubated at 37 °C for 2 h every 24 h for 4 consecutive days. Then, we measured the optical density at 450 nm using an automatic microplate reader (Synergy4; BioTek, Winooski, VT, USA). For the colony-forming assay, 800 infected cells were seeded in 6-well plate and incubated with according culture for 14 days. Then the cells were fixed with ethanol and then stained by crystal purple solution.

A transwell assay was used to assess cell invasion with a transwell system from Corning co. Ltd., USA. Twenty-four h after transfection, nearly 4.0×104 cells in 100 µl of serum-free medium were added to each upper chamber. Medium containing 10% fetal bovine serum was applied to the lower chamber as chemo-attractant. After a 24 h incubation at 37 °C, the non-invasive cells that were remaining on the chamber were removed with cotton-tipped swabs. The cells that migrated and adhered to the lower surface of the filter were fixed with ethanol, stained with 0.5% crystal violet, photographed at 200×, and counted at 400× magnification (BX51, Olympus, Japan).

A wound-healing assay was used to assess cell motility. Transfected cells were plated at equal density in 6-well plates and grown to confluent to 90%. Wounds were then scratched with a sterile pipette tip, the cells were washed twice with PBS and serum-free culture medium was added. The wound closing procedure was observed for 48 h, and images were captured every 24 h at 100× magnification (BX51, Olympus, Japan).

Total RNA was extracted from the tumorous and adjacent normal tissues using Trizol (Invitrogen, Carlsbad, CA, USA) following the manufacturer's protocol. Real-time (RT) and quantitative polymerase chain reaction (qPCR) kits were used to evaluate the Linc00152 expression levels from the tissue samples. The RT and qPCR reactions were conducted as previously described [11, 12]. Relative gene expression was calculated using the comparative cycle threshold (CT) (2-ΔΔCT) method. Actin was used as an endogenous control to normalize the data. The utilized Linc00152 primers were designed in a previous study [8]. The Linc00152 mRNA levels were defined as high if they were above the median value [8, 12].

The Shanghai Medical Experimental Animal Care Commission approved the animal experiments. Male BALB/c-nu mice (4-5 weeks of age, 18-20 g) were maintained under specific pathogen-free conditions at the Fudan University Experimental Animal Department. All experimental procedures involving animals were undertaken in accordance with the institute's guidelines. For the tumor metastasis models, 1×106 Lenti-shNC and Lenti-shLinc00152 stably infected A549 cells were injected subcutaneously or into tail veins of mice (n=3 per group) and then were kept under observation for 28 days. All the mice were anaesthetized and sacrificed. The livers were excised and measured and fixed followed by H&E sections.

Each experiment was repeated three times, and the data are presented as the mean with error bars indicating the standard deviation. All statistical analyses were performed using SPSS 20.0 (IBM, SPSS, Chicago, IL, USA). Student's t-test and one-way ANOVA analyses were used for either 2 or multiple group comparisons, respectively, for statistical significance. Correlations among the clinicoparameters and Linc00152 expressions levels were examined using the chi-square or Fisher's exact probability tests. DFS and OS curves were calculated by the Kaplan-Meier method and analyzed with the log-rank test. The DFS rates were calculated from the date of surgery to the date of disease progression (local and/or distal tumor recurrence) or to the date of death. The OS rate was defined as the length of time between the diagnosis and death or last follow-up. Variables with a value of p<0.05 in the univariate analyses were used in the multivariate analysis on the basis of the Cox proportional hazards model. All p values were 2-sided, and statistical significance was established at p<0.05.

Linc00152 was upregulated in lung adenocarcinoma

We first detected the Linc00152 levels using RT-qPCR in 110 patients with lung adenocarcinoma to confirm whether its level would be higher in malignant lesions than that in ANT. We observed significantly higher Linc00152 mRNA levels in the 110 malignant lesions than those in the ANTs (p<0.05, Fig. 1A-B), suggesting that Linc00152 could be detected in lung adenocarcinoma and its mRNA level is abnormally upregulated.

Second, we analyzed the correlation between Linc00152 levels and the clinicopathologic status of lung adenocarcinoma (Table 1). The Linc00152 mRNA levels were upregulated in tumors with a higher tumor burden, as defined by further lymph node metastasis station (p=0.005), more remote metastasis (p=0.002) and more advanced TNM staging (p=0.004, Fig. 1C, Table 1). However, no significant correlation was found between the Linc00152 levels and age, tumor grade or T stage only. 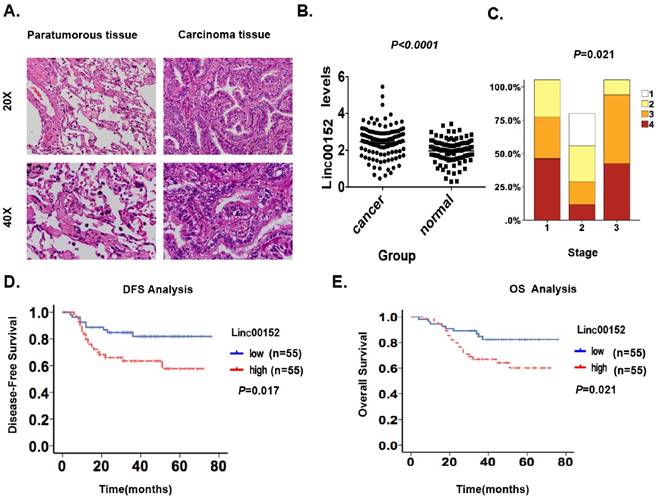 The results showed that patients with high Linc00152 levels (n=55) had significantly shorter DFS (p=0.017; Fig. 1D) and OS rates (p=0.021; Fig. 1E) than those with low levels (n=55). A univariate Cox analysis showed that T stage, TNM stage, N station and Linc00152 levels correlated with the DFS and OS rates (Table 2-3). A multivariate analysis using the Cox proportional hazard model demonstrated that the Linc00152 level was an independent risk factor for DFS (p<0.001, Table 2) and OS (Table 3). Notably, the T stage, TNM staging and Linc00152 were independent risk factors for both DFS and OS (Table 2-3). These results identified that upregulated Linc00152 levels in lung adenocarcinoma predicted poor survival and might be a prognostic biomarker for the disease.

Univariate and Multivariate analysis of disease-free survival in lung adenocarcinoma

Univariate and Multivariate analysis of overall survival in lung adenocarcinoma 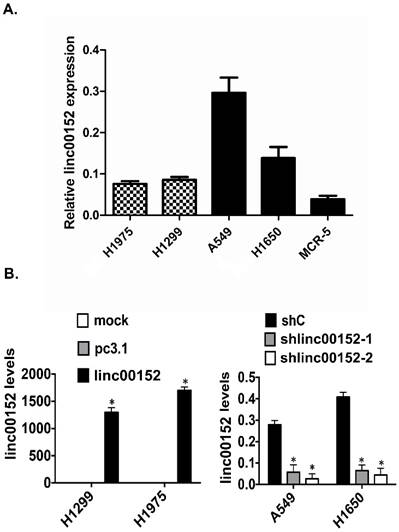 Finally, we investigated tumor growth and metastasis by knockdown of Linc00152 in nude mice. Knockdown of Linc00152 decelerated the tumor growth speed in nude mice models compared with controls (Fig. 5A, p<0.05). The final tumor volumes and weights were significantly lower in the group of shLinc00152 compared with controls (Fig. 5B, p<0.05). As to the metastasis models, although there were no conspicuous visible lesions in the samplings of lung and liver in both groups (Fig. 5C), the following H&E slides determined that the metastatic cancer lesions were formed microscopically in the controls but not in Linc00152-overexpressing group (Fig. 5D). Taken together, these data suggest that Linc00152 promotes tumor growth and metastasis in nude mice models.

Our study was the first one to report the mRNA level changes and biological functions of Linc00152 in lung adenocarcinoma tissues and cell lines. We found that Linc00152 was abnormally highly expressed in lung tumor tissues compared with ANT. High Linc00152 expression was correlated with increased lung cancer malignancy and poorer prognoses. The in vitro experiments revealed that Linc00152 promoted lung cancer cell proliferation, migration and invasion. Moreover, we identified that knockdown of Linc00152 decelerated tumor growth and reduced the incidence of remote metastasis in the in vivo nude mice models.

Linc00152 is a newly found lncRNA located on 2p11.2[15, 16]. It has been reported to exert oncogenic functions in gastric cancer, breast cancer and hepatic cancer [7, 9, 15, 17]. We formerly also found that Linc00152 predicts poor prognosis and facilitate tumor progression in renal clear cell carcinoma, suggesting that Linc00152 is a general oncogene in somatic malignancies [8]. In our study, we observed abnormally upregulated Linc00152 expression in lung cancer tissues and high level of Linc00152 predicted a poor prognosis in lung adenocarcinoma, reducing both DFS and OS. Moreover, the multivariate analysis found that Linc00152 was an independent risk factor, suggesting that Linc00152 might be a novel prognostic indicator of lung adenocarcinoma. Future studies could explore the serum level of Linc00152 in patients with lung adenocarcinoma to confirm to dig its clinical value in the clinical monitoring of tumor progression and prognosis. 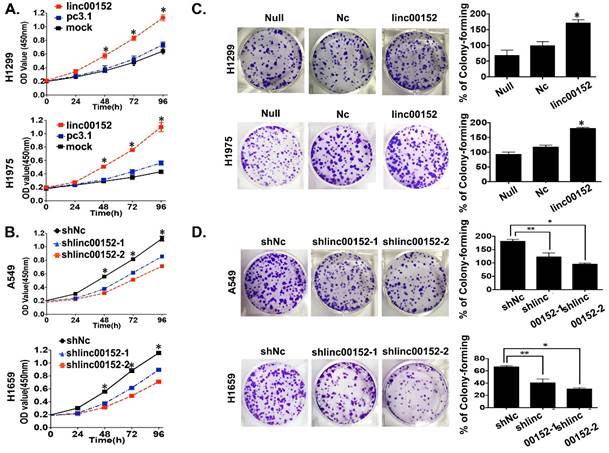 Our study suggests that Linc00152 predicts poor prognoses and promotes tumor progression in lung adenocarcinoma. Linc00152 might be applied as a prognostic predictor for the prediction of patient risk. 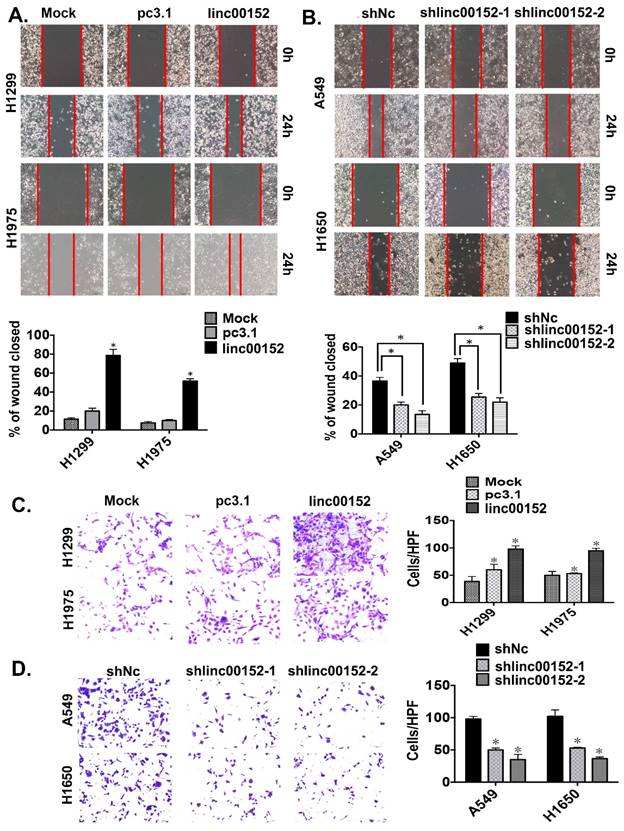 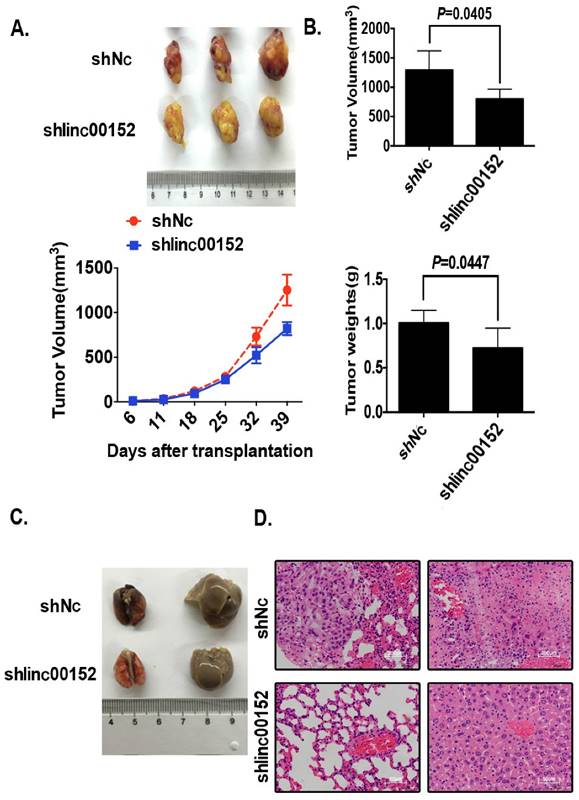 The authors have declared that no competing interests exist.