Lung cancer is one of the most common lethal malignancies and lung adenocarcinoma accounts for more than 80% [1, 2]. Metastasis is the major factor associated with poor prognosis of lung adenocarcinoma, in which lymph node metastasis is an important way [3, 4]. It is thus necessary to explore an optimal molecular target for suppressing the lymph node metastasis and improving the therapeutic ratio.

Chemokine receptor 7 (CCR7) is a G-protein-coupled receptor that belongs to C chemokine receptor family. It has high efficiency chemical driving effect on some human T cell lines and peripheral blood lymphocytes, suggesting a specific for lymphocytes. CCL19 and CCL21 are its specific ligands [5]. The large numbers of research revealed that CCR7 express highly in several kinds of cancer cell, and this phenomenon is associated with lymph node metastasis by lymphocyte trafficking and homing to lymph nodes during immune and inflammatory reactions [6-9]. High expression of CCR7 was detected in lung adenocarcinoma and its cancerous lymph nodes [10, 11]. These results suggest that CCR7 may become a diagnostic and therapeutic target in the treatment of malignant tumor. But there is still no systematic research into the relationship between CCR7 and lymph node metastasis.

VEGF-C/D is one of the vascular endotheial growth factor family, is mainly involved in mediating lymphatic endothelial cell proliferation and differentiation [12]. VEGF-C/D has a strong specificity, and VEGF-R3, as the only receptor of VEGF-C/D, directly involved in lymphangiogenesis. Some studies show that the overexpression of VEGF-C, VEGF-D and VEGF-R3 is closely related to lymph node metastasis in several kinds of cancer [13-15].

Based on the above data we hypothesized that: CCR7 can be regulated via the VEGF-C/D-R3 pathway and promotes lymphatic metastasis of lung cancer. To assess the functional role of CCR7 in lung adenocarcinoma cells, we developed a lentivector-mediated small interfering RNA (siRNA) approach to selectively downregulate the expression of CCR7 in lung adenocarcinoma A549 cells. The transwell experiment and scratch test shows that the invasion and migration ability was inhibited with the CCR7 silencing. The qRT-PCR and Western Blot technique confirmed the mRNA and protein level changes of VEGF-C, VEGF-D and VEGF-R3 were consistent with CCR7. Furthermore, the above phenomenon is further confirmed in vivo xenograft in nude mice. The research suggests that JNK, ERK and WNT pathways play an important role in helping cancer to spread, and may be a potential target for future new drugs [16-18]. In this study, immunofluorescence was used to observe the expression of JNK, ERK and WNT pathways, in order to further study the crosslinking method between CCR7 and VEGF-C/D-R3.

40 lung adenocarcinoma patients who had taken the operation treatment from Daping Hospital were selected in this study. All tumor and paratumor tissues were harvested within 30 minutes from complete resection. The tissue samples were obtained by surgical biopsy and processed through paraffin-embedded by Pathology Daping Hospital and the immunohistochemistry was confirmed by BeiJing Cowin Biotech Co.

Normal epithelium, H23, Lewis-llc, A549 and H2066 in the experiment were all stable cultured in our laboratory. The cells were cultured in DMEM high glucose medium (GIBCO) with 10% of Australia fetal bovine serum (GIBCO) in an atmosphere of 5% CO2 at 37℃. 75 cm2 culture flasks were selected and all cell sample were harvested in a solution of trypsin-EDTA at the logarithmic growth phase (GIBCO).

The transfection system was constituted by lentivector dilution, polybrene and cell in logarithmic growth phase. The optimal titre of virus (MOI=30) was measured according to the transfection experiment. The flow cytometry was used to separate the cell the GFP expression level were between 10 to 104 units after getting stable and highly express GFP A549 cells.

Approximately 5 × 104 cells after transduction were seeded in 6-well culture plates and incubated in complete medium to 80-90% confluence. The cells were harvested, washed with ice-cold PBS twice, and fixed with DMEM. The flow cytometry was used to separate the cell the GFP expression level were between 10 to 104 units with FACS Calibur flow cytometer (BD Biosciences) after getting stable and highly express GFP A549 cell.

6-week-old male nudes were selected (Experimental Animal Center of Daping Hospital). The suspension of A549 cells (2 × 107/ml) was injected subcutaneously into the left axillary of each mouse. Mice were randomized for 5 per group (N: normal A549 cell line, S: CCR7-siRNA cell line, E: empty plasmid transfected A549 cell line) after tumors formed on 7 day postimplantation. Within 3 weeks the injection site skin changes and local reaction were observed regularly. Upon termination, each mouse was weighted and tumors were harvested for Western blot analysis and quantitative RT-PCR.

The scratch test and transwell test

3 groups of cells in logarithmic growth phase were seeded in 6-well cell culture plate. A trace on the surface of cells in culture was draw with a pipette tip, the scratches "healing" case was observed under phase contrast microscope after culturing with serum-free medium for 24 hours and 48 hours. Scratch marks width and the number of cells within the distribution were measured. The experiment was repeated thrice.

The paved matrigel transwell chamber were placed in 24-well plates. Cells in logarithmic growth phase (70%-80% in integration of state) were made into cell suspension (3.0 × 105/ ml) and plated 0.2 ml (0.6×105) per well into transwell upper chamber. Then removed the transwell chamber after 24 h culture. The inner surfaces of cells were erased using a cotton swab dipped in serum-free medium. Membrane was immersed in 95% ethanol for 10min and stained by crystal violet. Ordinary optical microscope was chosen to observe cells penetrate the membrane of the lower chamber, counting five high power field and averaging analysis. The experiment was repeated thrice.

Total RNA was extracted by the RNAiso plus (Invitrogen Co), cDNA was transcribed from mRNA with Prime Script RT-PCR Kit and Oligo dT Primer (Invitrogen Co). The mRNA level of CCR7, VEGF-R3, VEGF-C, VEGF-D were measured by Real-time quantitative PCR Thermal Cycler Dice Real Time System was used to amplification react the cDNA. The qRT-PCR kit was provided by Invitrogen. All values were normalised to an endogenous β-actin control. Each mRNA was determined thrice.

Protein lysates were subjected to electrophoresis on a 4% SDS-PAGE and proteins were electrotransferred to polyvinylidene fluoride membranes. Membranes were incubated with 5% non-fat dry milk in TBS and probed with anti-CCR7, anti-VEGF-C, anti-VEGF-D, anti-VEGF-R3 and anti-LYVE-1 in TBST (0.1% Tween 20 in TBS). Horseradish peroxidase-conjugated anti-rabbit (or mouse) IgG (Sigma) was used for detection of immunoreactive proteins by chemiluminescence (Western Blot Chemiluminescence Reagent Plus). All Western blot assays were repeated 3 times.

The effects of CCR7 siRNA on the expression of CCR7

The A549 cell was chosen for the follow-up experiments because of the high CCR7 protein expression level (Figure 2A). The transfection of target cells by lentivector was successful, and the MOI was selected in 30 (Figure 2C). 3 stably cell lines were constructed: CCR7-siRNA A549 cells, empty plasmid A549 cells and untransfected normal A549 cells. The Western Blot test show that CCR7-siRNA can significantly reduce the expression level of CCR7 (P<0.05; Figure 2D, E). In comparison, no significant difference on protein level was found between A549 with empty plasmid and untransfected normal A549. 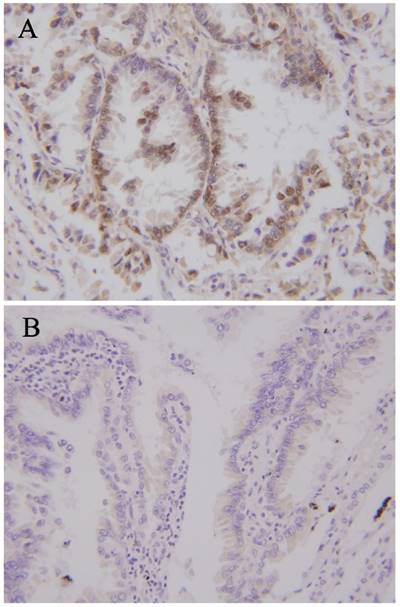 The scratch test was chosen to test the migration ability of three groups of A549 cell. After serum free culture for 24 h and 48 h, different degrees of healing were observed. S group with low expression level of CCR7 had poorer healing ability than E and N group with highly expression level of CCR7 (P<0.05; Figure 3A, B). Transwell experiments were used for the study of the invasion ability of A549 cell. After culture for 24h, we observed that three groups of cells were visible through the membrane into the lower chamber. The cell number of group S was far less than group E and N (P<0.05; Figure 3C, D). 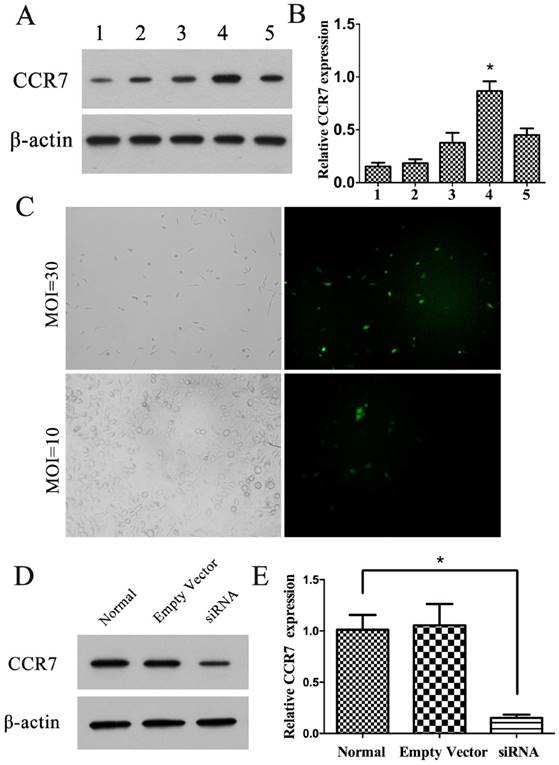 The effects of CCR7 inhibition on the xenograft tumor

A xenograft experiment was designed to investigate the function of CCR7 siRNA in vivo, and normal A549 cell line, CCR7-siRNA cell line, empty plasmid transfected A549 cell line and nude mice were selected. Mice bearing subcutaneous tumors were successfully constructed on the designed position. Those nude mice were put to death after 1 month. Tumor, peritumoral and lymph node tissue were taken out for paraffin section, HE staining and observation under a microscope. The tumor size of S group was less than N and E group, and there was statistically significant (P<0.05; Figure 4).

For the investigating of the function of CCR7 siRNA, the mRNA level of CCR7, VEGF-C, VEGF-D and VEGF-R3 in tumor tissue and paratumor tissue were measured by qRT-PCR. Simultaneously, the mRNA level of LYVE-1 was tested as the specific lymphatic markers. The analysis showed that CCR7, VEGF-C, VEGF-D and VEGF-R3 mRNA levels were significantly inhabited in the CCR7-siRNA cell line group. LYVE-1 expression level was also decrease (P<0.05; Figure 4 C, D).

For further validating the relationship between CCR7 and tumor lymphatic metastasis, the investigation in vitro was also carried out. The protein level of CCR7, VEGF-C, VEGF-D and VEGF-R3 in each group of A549 cell were measured by Western Blot. The analysis showed that CCR7, VEGF-C, VEGF-D and VEGF-R3 protein levels were significantly inhabited in the CCR7-siRNA cell line group. But no difference was found between empty plasmid transfected A549 cell line group and normal A549 cell line group (P<0.05; Figure 5 A-D). The results showed that CCR7 can inhibit the expression of VEGF-C/D-R3 axes.

Immunofluorescence was used for preliminary testing ERK, WNT and JNK expression levels. The results showed that ERK, WNT and JNK were all detected. The expression level of WNT and ERK had been upregulated in S group comparing to N and E group (P<0.05). However, we observed no difference in JNK (Figure 5E, F). These data indicated that CCR7 may affect the proliferation and metastasis potential of lung adenocarcinoma cells by altering ERK and WNT protein expression.

Effect of CCR7 on cell migration and invasion. (A, B) cell migration was measured by a scratch wound assay in vitro. (C, D). Transwell assays were performed to investigate the migratory and invasive ability in A549 cells with CCR7 stably silenced. *P< 0.05. 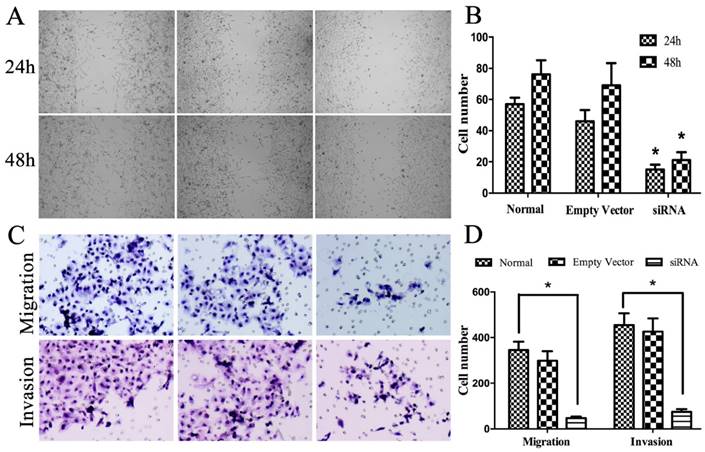 The effect of CCR7 on tumorigenesis in vivo. (A) CCR7-siRNA lentivector was transfected into A549 cells, which were injected in male athymic mice, respectively. (B) Tumor weights were calculated after injection 8 weeks. Bars indicate S.D. (C) qRT-PCR was performed to detect the expression of CCR7, VEGF-C, VEGF-D, VEGF-R3 and LYVE-1 in tumor nodule. β-actin was used as an internal control. *P< 0.05. 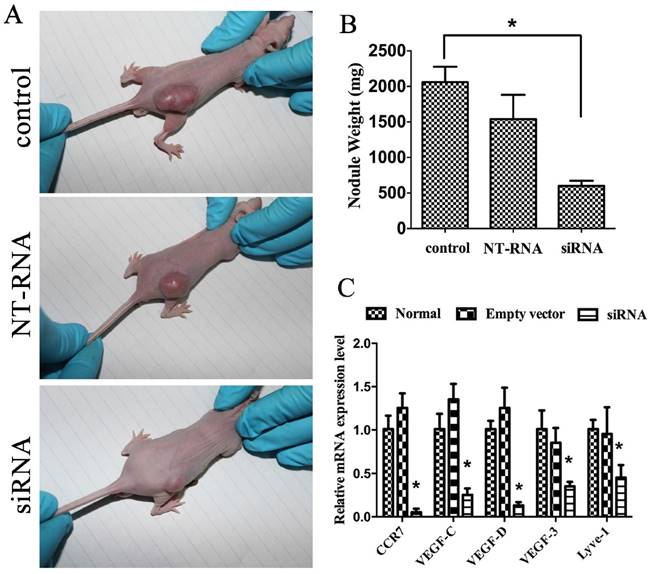 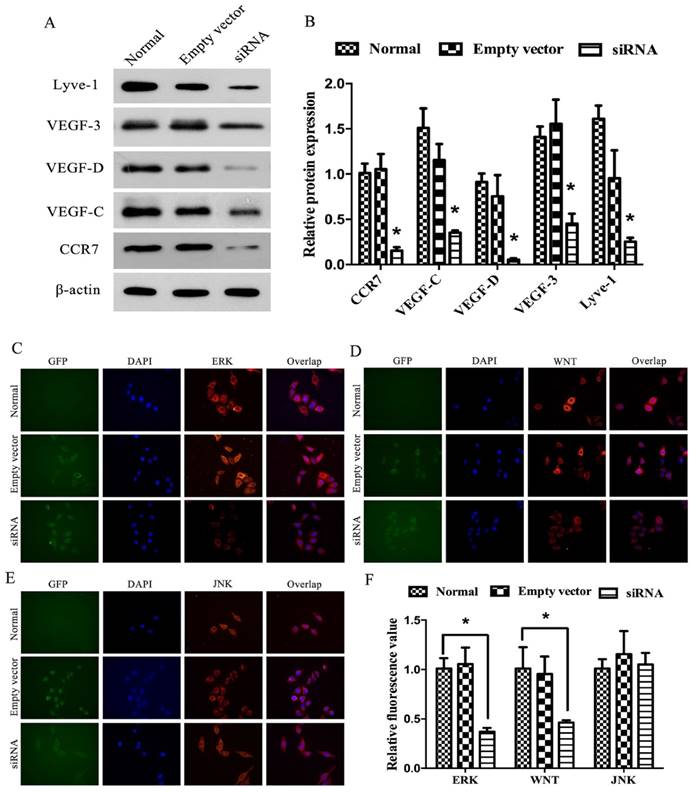 According to our conclusion, the lung adenocarcinoma patients with high risk of lymph node metastasis can be advance screened by detecting CCR7 level. The lymph node biopsy and dissection in the following surgery should be taken seriously enough, the treatment options should also be appropriate adjust after surgery. The gene therapy of lung cancer is a hotspot in recent years. The key and difficult point of the research is the selection of molecular target [31-35]. Our study provides a possible answer to this question. CCR7 might become a new molecular target for treating lung adenocarcinoma according to its high levels of expression in tumor and paratumor tissue and high correlation to the lymph node metastasis. Current research proved that RNAi targeting of VEGF-C and VEGF-D can be an effective therapeutic strategy for lung adenocarcinoma. Combined with our research, the joint silence of CCR7 and VEGF-C/D may get better outcomes.

The authors declare that they have no competing interests.