MaiMenDong Decoction and WeiJing Decoction (Jin formula) is a traditional Chinese medication that consists of 8 medicinal plants, which recorded in the classical TCM literature Jin Kui Yao Lue and has been utilized in the treatment of lung diseases for hundreds of years in China. The present study aimed to determine the anti-tumor activity and the underlying mechanisms of Jin formula combined with cisplatin in the treatment of non-small cell lung cancer (NSCLC). Xenograft model of NCI-A549 was established in Balb/c nude mice. Five groups, including normal, MOCK, Jin, cisplatin (DDP), and Jin+DDP were included in the study. We found that Jin formula ameliorated the body weight loss caused by DDP 15 days after drug administration. Moreover, the combination of Jin with DDP enhanced the anti-tumor function of DDP. Microarray analysis showed that Jin suppressed gene expression of certain pathways which regulating cell cycle and apoptosis. Furthermore, DDP mainly decreased the gene expression level of angiogenesis associated factors, such as VEGFA, TGF-β and MMP-1. Moreover, co-treatment with Jin and DDP not only down-regulated Bcl-2 and E2F1, but also decreased the expression of MYC, MET, and MCAM. In addition, co-formula decreased the levels of p-AKT (thr308) and p-PTEN, increased Bax/Bcl-2 value, and resulted in apoptosis of tumor cells. Taken together, Jin+DDP significantly inhibited the growth of A549 cell transplanted solid tumor with slight side effect compared to the treatment by DDP only, and had a better effect than the Jin group. The mechanisms may be mainly associated with inactivation of PI3K/AKT pathway and apoptosis induction.

Lung cancer is one of the most common cancer types in human beings and occupies the top cancer death world widely [1, 2]. NSCLC accounts for approximately 80% of all incidences [3, 4]. Standard therapeutic approaches for NSCLC are surgical resection and adjuvant chemo and radio-therapy. However, these therapies can frequently lead to side effects [5, 6]. Therefore, new drugs with low-toxic side-effects are absolutely required. Traditional Chinese medicine (TCM) has been used to treat human diseases for a long history due to its safety and efficacy, whereas single herb is rarely used alone, instead, the formula is the essence of TCM [7-9]. MaiMenDong Decoction and WeiJing Decoction (Jin formula) is an ancient herbal formula recorded in the classical TCM literature Jin Kui Yao Lue. TCM believes that lung tumor is associated with Qi and Yin deficiencies, Qi insufficiency in the spleen and lungs, or pathological alterations because of Qi stagnation, blood stasis, and phlegm and toxin accumulation. The Jin formula can refill both Qi and Yin, reinforce the spleen and lungs, and clear the lungs. The Jin formula can also remove phlegm and activate blood circulation to remove stasis. Our study evaluated the effect and the mechanisms of Jin formula combination with chemotherapeutic agent DDP for NSCLC.

Human lung cancer (NCI-A549) cells used in this study were originally from the Cell Line Bank (Shanghai, China) and maintained in media with 10% fetal bovine serum (FBS, Gibco), 100U/ml penicillin and 100mg/ml streptomycin (Amresco). These cells were cultured at 37 °C in 5% CO2.

6-8 weeks old Balb/c female athymic (nude) mice (n=40) that weigh 20 ± 2g were acquired from the Academy of Military Medical Sciences (Beijing, China). In nude mice, the tumor regression model was widely used to assess anti-cancer activity. This model was applied to assess inhibition of solid tumor growth with different drug treatments. Briefly, each mouse was subcutaneously injected with 1×107 A549 cells in the axilla. An apparently visible tumor mass grown was observed 7 days after injection. When the tumor size was about 50mm3, the mice were randomly divided into five groups: Normal group (saline only), MOCK group (saline only), Jin group (0.83g/kg/day Jin formula), DDP group (5mg/kg/day DDP), Co-formula group (Jin formula+DDP, same dosage as above). Eight mice were included in each group. Mice of Jin formula, MOCK, and normal groups were orally administrated, and mice of DDP group was injected i.p. daily for 15 days.

The study was approved by the Jiangsu Animal Care and Use Committee and followed the national and institutional rules of animal experiments.

Mice were monitored after drug treatments. Each mouse was weighed every two days. The longest (a) and shortest (b) tumor diameters (mm) were recorded and formula for an ellipsoid sphere (0.52×a×b2) was utilized to determine the volume of tumor. The tumor weight was also determined when the animals were sacrificed. The effect of the anti-tumor treatment was expressed below:

W mock and W treatment are tumor weight of mock and treatment group, respectively. Tumors were preserved in liquid nitrogen for future studies.

a) Calculate the ΔCt in every treatment group for each pathway-focused gene.

b) Calculate the ΔΔCt for each gene across two PCR Arrays (or groups).

c) Calculate the fold-change for every gene from G1 to G2 as 2-ΔΔCt.

Tumors were grinded with subsequent addition of lysis buffer, and then treated with ultra-sonic disrupter on ice for thirty minutes. The homogenate were then centrifuged at 12000rpm/min for thirty minutes. The supernatant was harvested and the samples were separated on a 10% polyacrylamide gel and then transferred to a PVDF membrane, which was incubated with primary antibodies to E2F1, CyclinD3, p-AKT (thr308), P21, Bcl-2, AKT, CDK4, P27, Bax, p-PTEN(ser380), p-AKT (ser473), p-GSK3β (ser9) (all from Cell Signaling Technology, USA) and β-actin (Santa Cruz Biotechnology, USA). Blots were incubated with peroxidase-labeled secondary antibodies (Cell Signaling Technology, USA). Antibody binding was detected using a Gel Imaging System (Bio-Rad, USA).

The data was analyzed by SPSS11.5 software and presented as mean±SD (mean ± standard deviation). The differential significance between the mean of mock and treatment groups was evaluated with one-way analysis of variance (ANOVA) followed by a paired t-test and Dunnett's t-test correction. Significant difference was defined at the level of p< 0.05.

During the treatment, the body weight in DDP group reduced significantly. However, the body weight well-maintained in Jin+DDP group. All of the mice in Jin group remained stable weight with normal activity (Fig. 1A). The growth of the solid tumor was inhibited by Jin, DDP, and Jin+DDP compared to the MOCK group (Fig. 1B). Jin significantly inhibited the tumor volume (p<0.05), whereas no significant difference was found in tumor weight compared to MOCK group (p>0.05). Meanwhile, DDP and Jin+DDP were found significantly inhibited both the tumor size and tumor weight (p<0.01) compared to MOCK group after sacrifice (Fig. 1C). The tumor-inhibition rates of MOCK, DDP, and Jin+DDP groups were 27.4%, 80.5%, and 75.9%, respectively (Table 1).

Effects of different treatments on the suppression of NCI-A549 transplanted tumor and survival condition of nude mice. (A) Mice of DDP group lost weight significantly, and mice of Jin+DDP group have markedly improved, and all the mice of Jin group keep stable weight with normal activity. (B) All drugs significantly suppress the solid tumor growth compared with MOCK group. (C) Jin and DDP inhibited both the volume and weight of tumors, and their combination displays a certain synergy. Values are means of three separate experiments ± SD. *p<0.05 and **p<0.01 by Student's paired t-test compared to MOCK group. 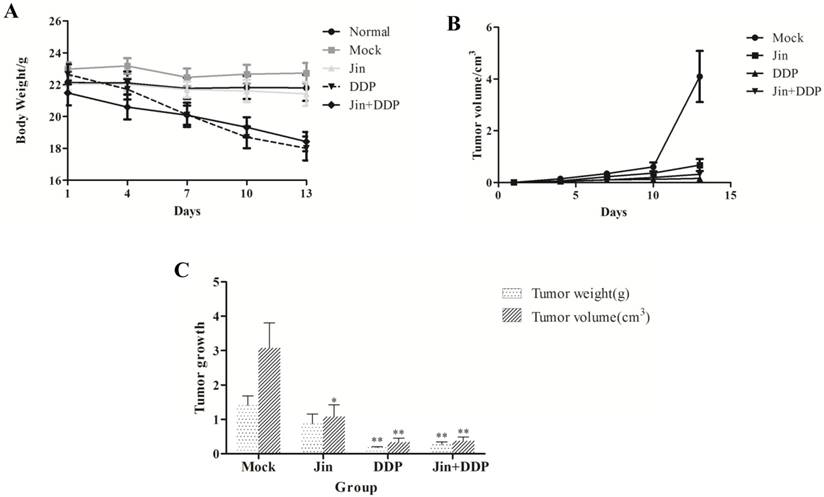 To elucidate the molecular mechanisms of inhibition of the tumor growth by Jin, PCR Array was utilized to find the gene expression profiles after treatment. We found 6, 6, and 11 putative genes showed a statistically 2-fold difference in expression in tumors of different groups compared to MOCK group. Among the genes, 3, 0, and 3 were up-regulated and 3, 6, and 8 were down-regulated in Jin, DDP, and co-formula groups, respectively (Fig. 2), which are listed and grouped by their functions (Table 2A—2C). The up-regulated genes were involved in TGF-β pathway. In contrast, the genes associated with cell cycle, proliferation, apoptosis, and angiogenesis were down-regulated, which are associated with the PI3K/AKT, MAPK and WNT/β-catenin Pathways, etc. 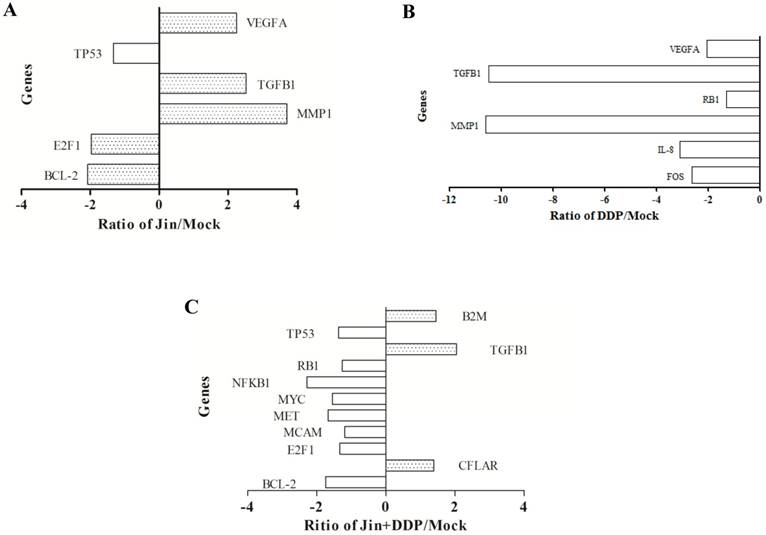 For centuries, Chinese medicinal herbs have had a wide range of uses. TCM formulae are rich in potential cancer chemo-preventive and therapeutic agents [10, 11]. TCM believes that lung cancer is caused by the deficiencies of Qi and Yin, Qi insufficiency in the lungs and spleen, or pathological alterations because of Qi stagnation, blood stasis, and phlegm, and toxin accumulation. The Jin formula can refill both Qi and Yin, reinforce the lungs and spleen, and clear the lungs. The Jin formula can also remove phlegm and activate blood circulation to remove stasis.

This study is the first to investigate the mechanism and demonstrate by which Jin formula induce apoptosis and anti-tumor activity in A549 human lung cells in vivo. The results suggest that Jin could ameliorate the side effects of chemotherapeutic agents, such as body weight loss, and co-formula enhanced the anti-tumor function of Jin.

It has been known that PI3K/AKT pathway is critical for the cancer cell survival when being exposed to different kinds stimuli of apoptosis, including osmotic stresses, and oxidative, matrix adhesion, irradiation, chemotherapeutic drugs, and ischemic shock [12-14]. Upon activation, AKT affects cellular functions, such as gene transcription, cell cycle, apoptosis, and protein synthesis through the phosphorylation of downstream substrates, including GSK3β and Bad. It has reported that the AKT gene is up-regulated in numerous cancers including NSCLC and its activity is constitutive. [15-17]. The AKT activation can be blocked by PTEN via inhibition of phosphorylation [18, 19].

The regulation of cell cycle is of great in the control of growth, and therefore, dysregulation of the cell cycle mechanism has been connected to carcinogenesis [20-22]. CDK4/CyclinD complex promotes change of G1 phase to S phase by the retinoblastoma (Rb) protein phosphorylation and release of E2F1 [23, 24]. CDK4 has been found to be up-regulated in numerous tumors, such as NSCLC. The activity of CDK/Cyclin complexes is negatively regulated through binding CKIs and the Cip/Kip family. Among them, P21 is known to induce cell cycle arrest in G0/G1 phase via inhibition of activity of the CDK4/CyclinD complex, and it appears to be an important partner for P53 [27, 28].

Apoptosis is the outcome of a complex interaction between pro- and anti- apoptotic molecules [29]. Proteins of the Bcl-2 family are important regulators of the apoptotic pathway, and Bcl-2 family can be subdivided into two families: one family, including Bcl-2, Bcl-XL, are anti-apoptotic proteins, the other, including Bax, Bad, are pro-apoptotic proteins. Data have demonstrated that many antitumor agents induced cell death by targeting the Bcl-2 family proteins, and the Bax/Bcl-2 value plays a crucial role in determining whether cells will die by apoptosis [30, 31].

The animal experiment showed that all treatment inhibited the tumor growth, and DDP has the best inhibitory effect, and Jin has the weakest. However, the mice of DDP group have severe weight loss, and combination with Jin has greatly alleviated the weight loss, meanwhile, enhanced the inhibitory effect of Jin.

Because the complexity of herbal formula, the results of western blot has not exhibit so consistent, and the tumor-inhibition rate is not the highest. However, co-formula significantly reduced the adverse effects of DDP, meanwhile, enhanced the anti-tumor effect of Jin. 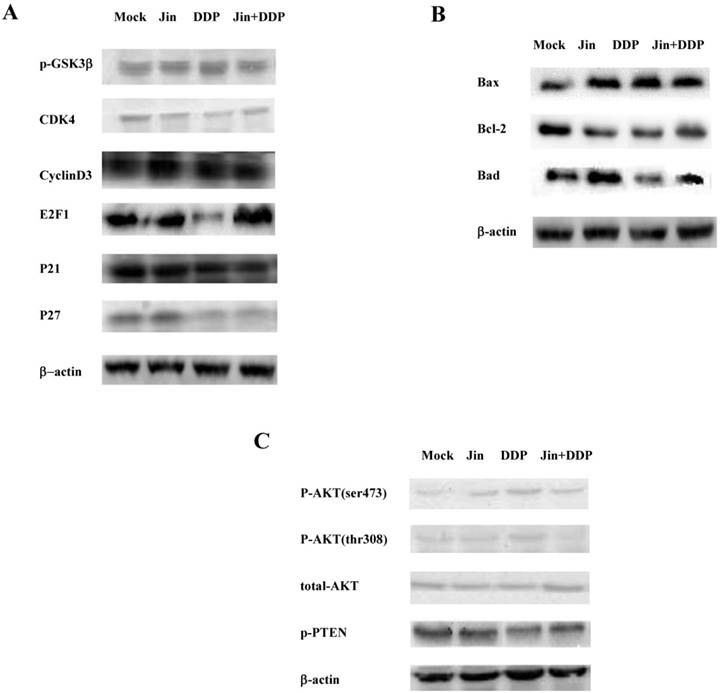 In summary, our results demonstrate that Jin+DDP significantly suppresses the growth of the transplanted tumor with slight side effect compared to DDP and have a better effect compared to Jin alone. The mechanism of the suppression of the tumor growth by the co-formula is mainly associated with inactivating PI3K/AKT pathway to induce cancer cell apoptosis. Combination of Jin with DDP will be a good therapy for NSCLC.

We thank members of the Fu lab, Emory University and Jiangsu key laboratory for TCM formulae research, Nanjing University of Chinese Medicine for assistance and enlightening discussions. This work was supported in part by National Science & Technology Pillar Program in the 11th Five-year Plan of China 2006BAI11B08-01(to H.F., and X.Z), the Priority Academic Program Development (PAPD) of Jiangsu Higher Education Institutions (to X.Z), the Research and Innovation Program of Postgraduates in Jiangsu Province (to M.C.). Technology Pillar Program in the 11th Five-year Plan of China 2006BAI 11B08-01 (to H.F. and X.Z.), the U.S. National Institutes of Health grants P01 CA 116676 (to H.F.), People Program (Marie Curie Actions) of the European Union's Seventh Framework Program FP7/2007-2013/ under REA grant agreement No. PIRSES-GA-2013-612589: CHETCH (China and Europe taking care of healthcare solutions) (to X.Z.), and the National Natural Science Foundation of China (81503374) (to M.C.).