Extramammary Paget's disease (EMPD) is a rare cutaneous malignant neoplasm of unknown histogenesis. It mostly arises in areas rich in apocrine sweat glands, e.g. the anogenital areas, the perineal area and axilla.[1, 2] Early lesions generally present as red or brown plaques and the lesions become erosive, infiltrated in the late stage. Patients classified as regional intraepithelial invasion experience good prognosis regardless of tumor diameter.[4-6] However, in some instances, EMPD tumor cells invade deeply into the dermis and develop nodules and ulcerations. Tumors then rapidly metastasize to regional lymph nodes and distant organs, leading to poor outcomes.[4-7] Treatment for advanced EMPD with systemic metastasis often ends up with a disappointing result, as no highly effective therapy has been established. Identification of reliable prognostic molecular markers for EMPD could provide novel therapeutic targets, which are critically important for developing molecular profile-directed therapies for patients with EMPD.

Chemokines belong to a superfamily of chemo-attracting proteins that bind to chemokine receptors. They are involved in many aspects of oncogenesis, including regulation of cancer cell growth, dissemination and host-tumor response.[8, 9] Alterations of chemokine expression levels are significantly associated with more aggressive disease and worse prognosis in diverse malignancies.[10, 11] CXCR7 and CXCR4 shared the same chemokine ligands, CXCL12,[12] with demonstrated critical roles in tumor growth, angiogenesis, and tumor cell homing in lymph nodes and distant metastases in a variety of solid human malignancies, such as lung cancer,[13] breast cancer,[13] prostate cancer,[14] rhabdomyosarcomas[15] and human glioma,[16] among others. In different tumor cell types, depending on the differentiation status and environment, they may function uniquely or even in combination. Based on these findings, we speculated whether CXCR4 and CXCR7 participate in the progression of EMPD and could serve as potential prognostic markers for the disease.

In this study, we investigated the expression of intratumoral CXCR4 and CXCR7 in a large cohort of EMPD patients. We evaluated the correlation between expression of these proteins and patient clinicopathological characteristics and assessed the prognostic value of these factors in progression-free survival (PFS) and cancer-specific survival (CSS).

Patients with EMPD who underwent surgical excision of primary skin lesions at our institution between June 2003 and March 2013 were screened. All patients underwent a thorough physical examination and diagnostic tests, including cystoscopy, colonoscopy, chest X-ray, abdominal and pelvic CT before surgery. Patients who presented with synchronous or metachronous internal noncutaneous malignancies were excluded. In total, 92 patients who met these criteria and with available specimens were included in this study. Patients' clinical characteristics, such as age, sex, time delayed in diagnosis, lesion location, primary treatment, and adjuvant therapy, were recorded. Histopathological parameters, including longest diameter of lesion, surgical margin status, depth of invasion and lymphovascular invasion, were examined by two experienced pathologists. We stratified the patients into three groups according to depth of invasion: (i) intraepitheliar; (ii) upper dermis; and (iii) lower dermis. The pathological stage was determined according to the 7th edition of the American Joint Committee on Cancer TNM classification of skin appendageal carcinoma.[17] Both inguinal and pelvic lymph nodes were deemed as regional nodes for the specific location of the lesion. PFS and CSS were assessed to determine the time to disease recurrence and cancer-related death, respectively. The end point for PFS was the date of local or regional recurrence or the date of distant metastasis. The end point for CSS was the date of cancer-related death. For CSS, patients who died of a cause unrelated to EMPD were considered as censored observations at the date of death. Hematoxylin and eosin sections were reviewed by pathologists to select representative areas of the original samples. The study was carried out in accordance with the ethical standards of the Helsinki Declaration II and approved by the Institution Review Board of Fudan University Shanghai Cancer Center. Informed consent was obtained from each patient and the study was approved by our Institutional Ethics Committee.

All slides were examined and scored by two experienced pathologists, who were blinded to the outcome and clinical data, in an open discussion. The CXCR4 and CXCR7 immunostaining was measured based on the intensity of staining (intensity score) and the quantity of immunoreactive cells (quantity score), as previously reported.[18] The intensity of immune staining was scored as 0, negative; 1, weak; 2, moderate; and 3, intense. The quantity of immunoreactive cells was scored as 0%, none; 1, 1%-30%; 2, 31%-60%; 3, >60%.[19] The product of intensity score and quantity score was used as the total score, in which 0-3 indicates low expression, and 4-9 indicates high expression.[20]

To evaluate the relationship between the immunostaining and clinicopathological parameters, the Chi-square test and Fisher's exact test were used. PFS and CSS were calculated by the Kaplan-Meier method with the log-rank test to assess differences between groups based on the gene expression status. Univariate and multivariate analysis of prognostic factors was performed using the Cox proportional hazard model. All statistical tests were performed using SPSS, version 20 (SPSS Inc., Chicago, IL). P < 0.05 was considered to indicate statistical significance.

CXCR4 and CXCR7 expression in EMPD

Association of CXCR4 and CXCR7 expression with patient characteristics

Clinicopathological characteristics in relation to CXCR4 and CXCR7 expression status

High expressions of CXCR4 and CXCR7 were associated with adverse prognosis 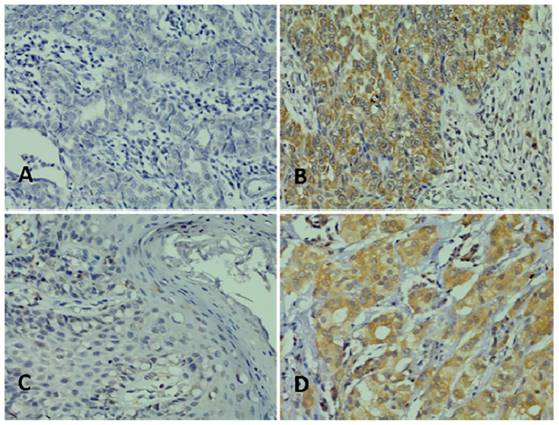 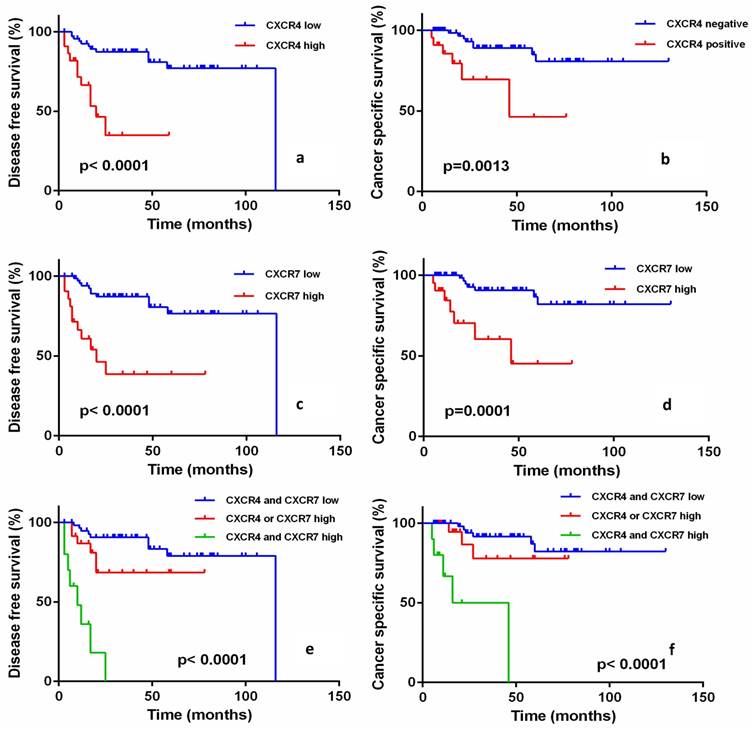 Our findings showing that patients with high CXCR4 and CXCR7 expression exhibited the worst prognosis were consistent with similar findings in other tumors. In Florian's study, the expression status of CXCR4 and CXCR7 was examined in 249 pancreatic adenocarcinoma patients and 47 patients that were CXCR7-positive also showed CXCR4 expression, which underlines the functional affiliation between these two molecules.[21] In Heinrich's study, immunohistochemical staining of 51 human pancreatic cancer specimens demonstrated high frequency of CXCR4 and CXCR7 co-expression: 37 showed double staining and 5 showed single staining, while 9 had no staining.[19] D'Alterio et al. demonstrated that concomitant high expression of CXCR4 and CXCR7 (P=0.0235) was an independent prognostic factor for renal cell carcinoma.[22]

Under pathological conditions, CXCR4 and CXCR7 signaling mediates several cellular effects affecting leukocyte recruitment, neovascularization and tumor progression. Activation of MAP and Akt kinase pathways promotes cell survival and proliferation, and transcriptional regulation of multiple genes affects angiogenesis, invasion and adhesion of cells. When co-expressed, CXCR4 and CXCR7 may form homo- and heterodimers, and heterodimerization seems to play an important role in the modulation of downstream signaling.[23-25] CXCR4 and CXCR7 co-expression on the same cells resulted in stronger calcium flux and more robust phosphorylation of MAPKp42/44 in response to SDF-1 stimulation compared with cells that express only CXCR4.[26] This suggests that the heterodimeric receptor potentially might activate a broader panel of intracellular pathways than activation of only one receptor.[27, 28] This may explain why the patients high expressing both receptors showed worse prognosis compared with the other groups.

For EMPD patients, identification of invasive disease is of great value in clinical practice. Consistent with previous published studies, our study also suggested that depth of invasion was an important prognosticator in EMPD. Patients diagnosed as invasive disease tend to experience rapid progression and adverse prognosis.[29-33] However, it is difficult to distinguish invasive disease with noninvasive disease before surgery. Thus, the identification of reliable biomarkers to distinguish invasive and noninvasive disease at the time of biopsy is desperately needed. A retrospective study including 44 specimens from 38 primary EMPD cases found that invasive lesions and metastatic lymph nodes tended to express significantly higher MUC5AC levels than in situ lesions (P < 0.01).[34] Other studies reported that Stat5a, E-cadherin and even FDG PET/CT may play some role in the invasion of EMPD.[35, 36] Aoyagi et al. reported that combined high expression of Ki-67 and cyclin D1 were useful for the early detection of micro-invasive EMPD. [3] However, several reasons have prevented the use of these biomarkers. First, due to the rarity of EMPD, most of these cohorts consisted of relatively small sample sizes, especially patients with invasive disease. Furthermore, the short follow-up also restricted the validation and application of these markers. In our study, we evaluated the expression of CXCR7 in 92 specimens, among which 47 were invasive cases. Over the median follow-up of 34 months (range 6-130 months), one quarter of the patients experienced clinical recurrence and over 15% patients died of EMPD. We found that high expression of CXCR7 closely correlated with invasive disease. This suggests that patients with high expression of CXCR7 at preoperative biopsy may be linked with invasive disease. Aggressive treatment might be advisable for these patients, including wider and deeper excision of primary lesion with or without adjuvant radiation therapy, and intensive follow-up. To decrease the possibility of local recurrence and distant metastasis, complementary resection may also be recommended.

Although the clinical significance of CXCR4 and CXCR7 in EMPD has been revealed, several limitations of this study warrant further discussion. First, this study was conducted in a single center. An independent external cohort is necessaryto confirm our findings. Second, our results were based on a retrospective analysis, which may have resulted in selection bias because of the various therapeutic strategies that were performed. Therefore, prospective studies are also needed to validate our findings. Finally, functional studies should be conducted to uncover the biological mechanisms of CXCR4 and CXCR7 in EMPD.

KC and GXL designed the study, analyzed and interpreted the clinical data, and wrote the manuscript. KC and ZWJ conducted the experiments. YYQ and YW helped with patient follow-up. YYK, BD and DWY supervised the project and revised the manuscript. All authors approved the final version and agreed to publish the manuscript.