Methods: The expression of Rac3 in lung adenocarcinoma specimens and paired noncancerous normal tissues were evaluated by immunohistochemistry. Lentivirus-mediated RNA interference (RNAi) was employed to silence Rac3 in lung adenocarcinoma cell lines A549 and H1299. A p38 MAPK inhibitor (LY2228820) was employed to inhibit activity of p38 MAPK pathway. Cell invasion and migration in vitro were examined by invasion and migration assays, respectively. PathScan® intracellular signaling array kit and western blot were employed in mechanism investigation.

Lung cancer is one of the most frequent causes of cancer-related deaths worldwide [1]. Non-small cell lung cancer (NSCLC) accounts for approximately 85% of lung cancer. The major histological subtype of NSCLC is lung adenocarcinoma which has poor 5-year survival rate because of tumor invasion and metastasis. There are many personalized treatments that have been developed for lung adenocarcinoma, such as gefitinib, erlotinib, crizotinib and ceritinib, but less than 15% of patients with lung adenocarcinoma are ideal candidates for these targeted therapies in the world [2]. Therefore, it is crucial to understand the molecular mechanism of invasion and migration of lung adenocarcinoma and find a novel therapy target.

The small G protein Rac3 (ras-related C3 botulinum toxin substrate 3) belongs to Rho subfamily of Ras proteins [3]. Rac3 proteins cycle between an active state bound to GTP and an inactive state bound to GDP. Rho and Rac-GTPases are known to be involved in human carcinogenesis, cancer cell proliferation, migration and aggression [4 -10]. Rac3 is highly expressed in a wide range of tissues [3], and correlates with poor prognosis of prostate cancer [11]. Rac3 gene has been mapped to chromosome 17q23-25, a region that is frequently deleted in breast and ovarian carcinomas [3,12]. Current studies indicate that Rac3 promotes cell proliferation and cell aggressiveness in breast cancer [9,10], and is also involved in esophagus and ovarian cancer development [13,14].

Eighty lung cancer specimens and paired noncancerous normal tissues were obtained from patients pathologically diagnosed as lung adenocarcinoma. All patients underwent complete surgical resections at the Department of Thoracic Surgery in the First Affiliated Hospital of China Medical University from 2008 to 2010. None of patients received chemotherapy or radiotherapy before surgery, and all patients received routine chemotherapy after surgery. All patients had completed survival follow-up data. The survival was defined as the time from the day of surgery to the day of death.

Eighty surgically excised lung adenocarcinoma specimens and paired noncancerous normal tissues were fixed in 10% neutral buffered formalin and embedded in paraffin, and 4μm paraffin-embedded sections were prepared. The sections were firstly deparaffinized in xylene, and then dehydrated by graded alcohol. After retrieval using sodium citrate buffer (pH 6.0), the slides were washed with phosphate buffered saline (PBS), and incubated with rabbit anti-human Rac3 monoclonal primary antibody (Abcam, USA, 1:100 dilution) overnight at 4℃. Biotinylated anti-rabbit secondary antibody was used at 37℃ for 20min. Steptavidin peroxidase was conjugated at room temperature for 20min. The sections were visualized using 3, 3'-diaminobenzidine (DAB) solution, couterstained with hematoxylin, and dehydrated in ethanol in the end. Two independent pathologists examined the immune-stained slides randomly. Cytoplasmic or nuclear immunostaining was considered positive staining. The intensity of Rac3 staining was graded as follows: 0 for no staining, 1 for light brown color, 2 for medium brown color, and 3 for brown color. The percentage scores of positive cells were as follows: 0 (≤5%), 1 (>5%-25%), 3 (>50%).The final scores of each sample were multiplied to give a score ranging from 0 to 9. Rac3 expression levels were defined as follows: - (score 0), + (score 1-2), ++ (score 3-5), +++ (score 6-9). The Rac3 expression levels were categorized into negative expression (-) and positive expression (+~+++).

LY2228820 were purchased from selleck company (Shanghai, China). The medium was supplemented with 5 μM LY2228820 for inhibition of p38 MAPK pathway, with DMSO as a control.

The complementary DNA (cDNA) sequence of Rac3 was designed from the full-length Rac3 sequence by Shanghai GeneChem Company (Shanghai, China). After testing knockdown efficiencies, stem-loop oligonucleotides were synthesized and cloned into the lentivirus-based vector PscioR (Addgene, Boston, MA, USA). A nontargeting scrambled RNA PscioR vector was generated as a negative control. Lentivirus particles were prepared as described previously [17]. Lung adenocarcinoma cells were infected with the Rac3 siRNA-lentivirus or negative control virus at a multiplicity of infection (MOI) of 20 at Day 7 and examined at Day 10. Cells were incubated in serum-free DMEM at 37oC for 4 h, then 10% DMEM was added and incubated for the following experiments.

Total RNA was extracted from cells with Trizol reagent (Invitrogen, Carlsbad, USA) according to manufacturer′s protocol and converted to cDNA with oligo dT using M-MLV reverse transciptase (Promega, USA). Quantitative Real-time PCR was performed using SYBR Premix Ex Taq (TaKaRa, Dalian, China) on the Real-time PCR system (TaKaRa, Dalian, China), as follows: 95℃ for 15 s, 45 cycles of 95℃ for 5 s and at 60℃ for 30s. A dissociation procedure was performed to generate a melting curve for confirmation of amplification specificity. The PCR primers pairs were as follows: for Rac3, sense 5′-CTCCAAAGTCATCGTCCGGTT and antisense 5′-TGAGTTGCACGTCAAATCTGG; for GAPDH, used as the endogenous control, sense 5′-TGACTTCAACAGCGACACCCA and antisense 5′-CACCCTGTTGCTGTAGCCAAA. The relative expression levels of Rac3 were normalized against GAPDH and analyzed using the 2-ΔΔCt method

Transwell invasion assay was performed using 24-well invasion chambers (Corning, BioCoat, USA) with an 8 micron pore size PET membrane that has been treated with Matriel Matrx. Cells were trypsinized and resuspended, then inoculated into the upper Matrgel chamber in 500μl of serum-free DMEM medium at a concentration of 1×105 cells/well, and incubated for 24 hours in A549 cells or 36 hours in H1299 cells. DMEM medium containing 30% fetal bovine serum in the lower chamber served as the chemoattractant. At the end of incubation, the noninvading cells on the upper membrane surface were erased with cotton swabs. The invasive cells on the lower surface of the membrane were fixed and stained with Giemsa for 5 min. Nine visual fields of each chamber were randomly chosen under a X71 microscope (Olympus, Tokyo, Japan), and the number of invading cells was counted. The invasion activity was quantified by cell counter.

Transwell migration assay was performed according the protocol of cell invasion assay, except that the 24-well chambers (Corning, BioCoat, USA) were not treated with Matriel Matrx. After 72h transfection, A549 cells were incubated for an additional 24 hours for migration, the H1299 cells were cultured for 16 hours for migration. Nine random fields of vision for each chamber were chosen under a X71 microscope (Olympus, Tokyo, Japan), and the number of migratory cells was counted. The migration activity was quantified by cell counter.

Cells migration was determined by wound-healing assay. Cells were seeded in 96-well plates at a concentration of 3×104 cells/well and incubated overnight. The center of cell monolayers was scraped with scratch instruments to create a scratch of constant width when the cultured cells reached a density of >90%. Then cellular debris was washed twice with serum-free DMEM medium, and DMEM medium with 0.5%FBS was added. Cells were cultured at 37℃ in a humidified atmosphere of 5% CO2. Wound area was observed and photographed at 0h, 8h and 24h with X71 microscope (Olympus, Tokyo, Japan). Quantitative analysis of cell migration was performed by using an average gap length from five random fields of vision and the percentage of change in the wound area was calculated using the following formula: % change = (average gap length at time 0h) - (average gap length at time 8h/24h) / average gap length at time 0h ×100%.

All cell culture experiments were performed in triplicate. The immunohistochemistry results and univariate analysis of lymphonode metastasis were performed by Chi-square test. Multivariate analysis of lymphonode metastasis was performed by logistic regression. The overall survival rate was estimated by Kaplan-Meier method and was analyzed by log-rank test. Other data were expressed as the mean±S.D. by Student's t test. Statistical analysis was performed using SPSS 16.0 software (SPSS, IL, USA) and the level of statistical significance was set at P<0.05. 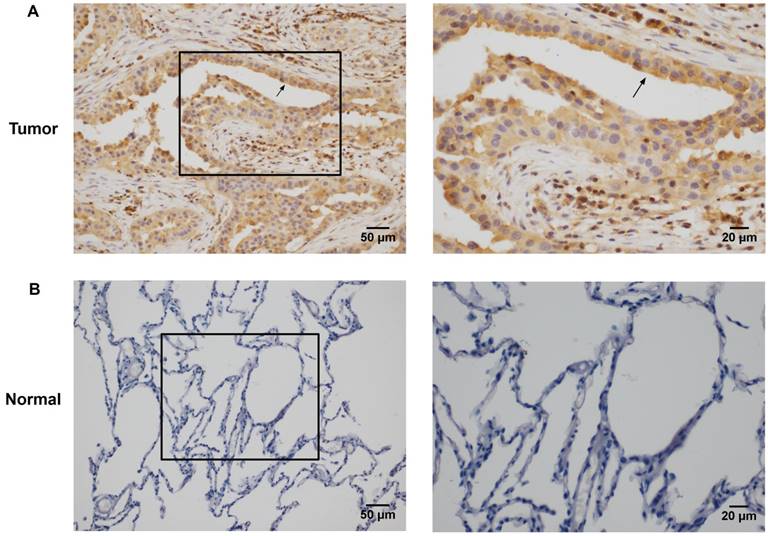 Univariate analysis of influence of variables on lymphonode metastasis

Rac3 is effectively knocked down by lentivirus-mediated RNAi

We performed transwell migration assay and wound-healing assay for cell migration assays in vitro. Compared with control group, the number of migratory cells were significantly decreased after 16 or 24 hours incubation in transwell migration assay (P<0.01 Fig. 4A-B). In wound-healing assay, cells migrated into the wound area more slowly, and the migration rate was significantly decreased than those in control group at 24h (P<0.01 Fig. 4C-D). These results indicated that Rac3 silencing inhibited the migratory abilities of lung adenocarcinoma cells in vitro.

To investigate the effect of Rac3 silencing on the invasion of lung adenocarcinoma cells in vitro, we performed invasion assay using 24-well invasion chambers. The number of invading cells were significantly decreased compared with control group after 24 or 36 hours incubation (P<0.01 Fig 4E-F), which indicated that Rac3 silencing inhibited the invasive abilities of lung adenocarcinoma cells in vitro. 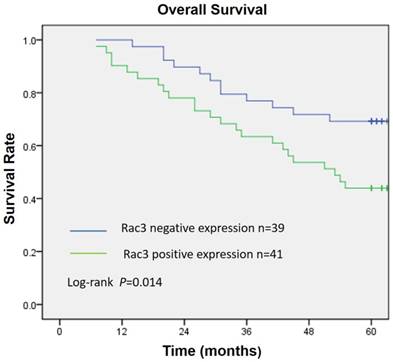 Multivariate analysis of influence of variables on lymphonode metastasis 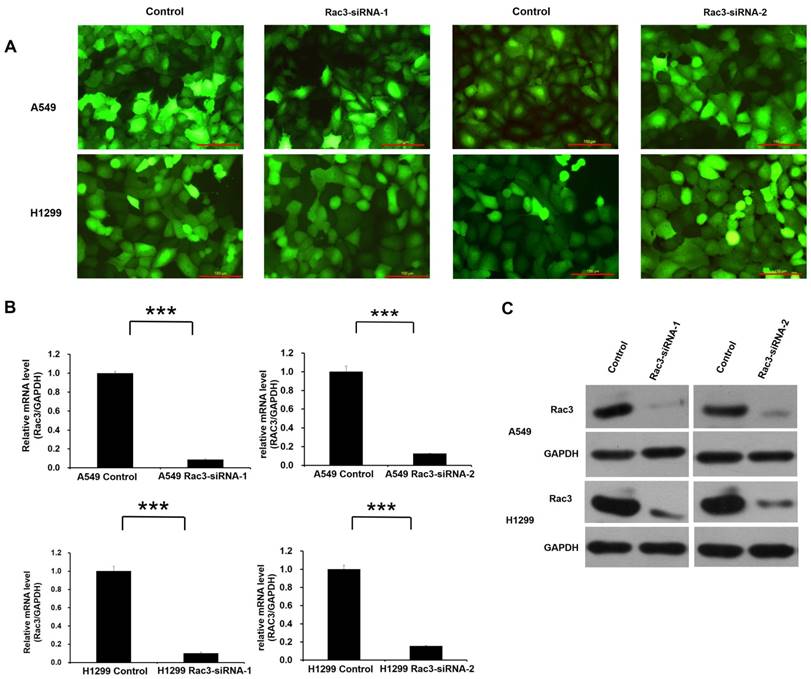 To further explore the molecular mechanisms by which Rac3 affects lung adenocarcinoma cells invasion and migration, a PathScan® intracellular signaling antibody array kit was used to detect the changes of signaling molecules in A549 cells before and after Rac3 knockdown. The data indicated that the phosphorylation of p38(Thr180/Thr182) was down-regulated in Rac3-RNAi group (P<0.05 Fig. 5A-B). Furthermore, western blot analysis showed that knock down of Rac3 significantly down-regulated p-p38 expression (Fig. 5C). By contrast, no Rac3 silencing-induced changes were observed in p38 expression (Fig. 5C). The results indicated that Rac3 knock down could significantly inhibit invasion and migration of lung adenocarcinoma cells, possibly via p38 MAPK pathway.

LY2228820, which was an important p38 MAPK inhibitor, was used to inhibit activity of p38 MAPK pathway. Transwell migration assay and invasion assay were performed to test cell migration and invasion activities by the treatment with LY2228820, with DMSO as a control. Our results showed that compared with control group, the number of migratory and invasion cells were markedly decreased after 18 or 20 hours incubation following the treatment of LY2228820 at 5μM in A549 cells (P<0.01 Fig. 6A-B). 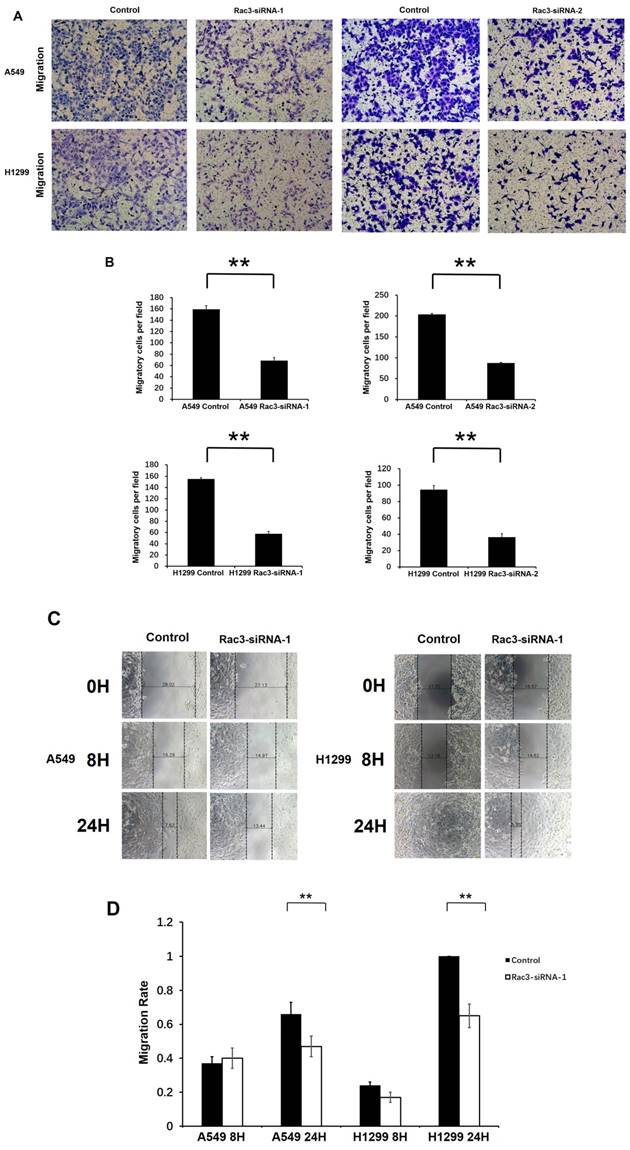 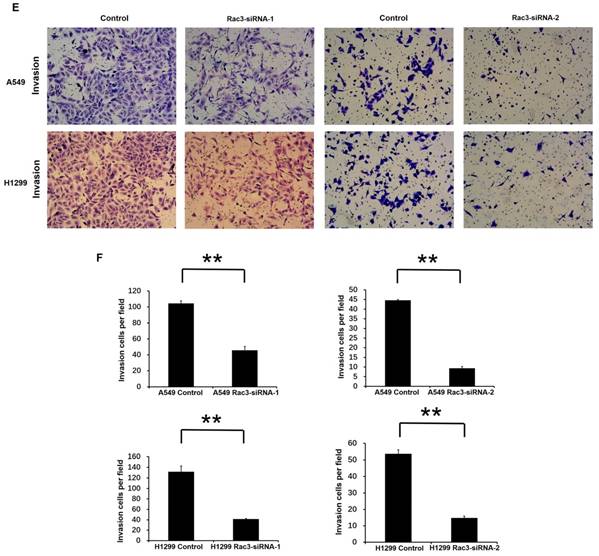 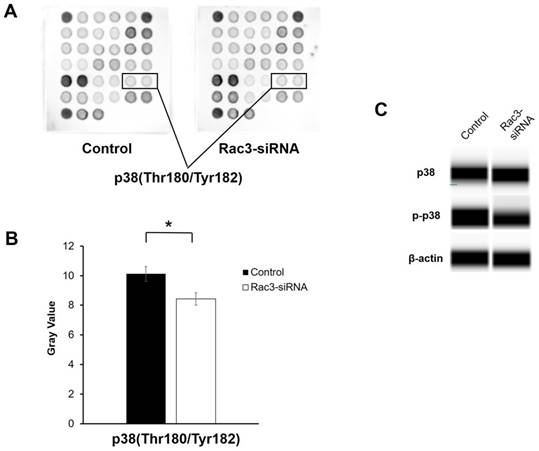 Western blot analysis was performed to explore the relationships of Rac3, EMT and p38 MAPK pathway. Our results showed that E-cadherin expression was markedly increased and vimentin expression was decreased after silencing of Rac3 in A549 cells (Fig.7A). Following the treatment of LY2228820 at 5μM for 24h, the expressions of E-cadherin and vimentin were similar to Rac3 knockdown (Fig.7B). These data strongly suggested that Rac3 regulated EMT through p38 MAPK pathway.

The rapid progression, recurrence and metastasis of lung adenocarcinoma which is the main subtype of lung cancer are the main reasons for poor prognosis and treatment rate. Therefore, it is of great important to find the precise molecular mechanism involved in lung adenocarcinoma invasion and metastasis. Rac3 was highly expressed in several malignant tumors, such as brain, breast and prostate tumors, which played an important role in cancer development [9-11,18,19]. Accumulating evidence has suggested that Rac3 might act as an oncogene in various human malignant tumors. Most studies were mainly focused on the role of Rac3 in cell proliferation, except for the report that Rac3 promoting cell aggressiveness in breast cancer cells through Rac3/ERK-2/NF-κB signaling pathway [9]. The roles of Rac3 in tumor invasion and migration were seldom investigated, especially in lung cancer. To the best of our knowledge, our study reported for the first time that silencing of Rac3 inhibited lung adenocarcinoma cells invasion and migration.

In this study, we detected modifications of some signaling molecules in cancer cell growth, invasion and migration by Intracellular signaling array kit. Selected signaling molecules were further detected by simon western blot analysis. We found that knock down of Rac3 inhibited activity of p38 MAPK pathway. In terms of the clinical importance of our findings, we found that a selective p38 MAPK inhibitor, LY2228820, reduced the Rac3-induced cell invasion and migration in lung adenocarcinoma cells. LY2228820 demonstrated antitumor activity of various cancers in vitro and vivo, including NSCLC[20], and the safety, tolerability and pharmacokinetics of LY2228820 were acceptable for patients with advanced cancer in phase I study[21]. LY2228820 enhanced the efficacy of standard chemotherapeutic agents used in clinical treatment of ovarian cancer, and was currently being investigated in combination with gemcitabine and carboplatin for women with platinum-sensitive ovarian cancer in phase II study [22]. 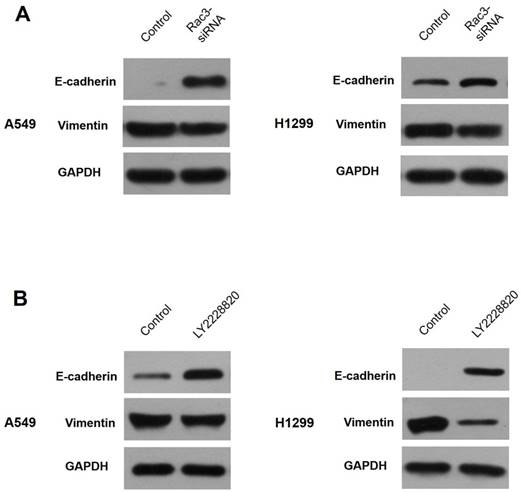