Patients and methods: A 4-year multicenter, prospective, observational study was conducted in multiple hospitals/institutes spanning three major regions in China. A total of 1,285 patients with gastric cancer, treated with six selected regimens between 2010 and 2014 were included. Kaplan-meier analysis was applied to estimate the time to develop myelotoxicity events for each regimen. Multivariable logistic regression model was built to identify predictors associated with chemotherapy-induced myelotoxicity, evaluating detailed specific factors of patients, disease and treatment patterns.

Conclusions: Myelotoxicity events were frequently observed within the gastric cancer population undertaking multicycle polychemotherapy. Predictive models based on risk factors identified for moderate-to-severe myelotoxicity should enable the targeted use of appropriate supportive care in an effort to facilitate the delivery of full chemotherapy doses on schedule.

Gastric cancer is frequently associated with chemotherapy-induced myelotoxicity due to the fact that subtotal gastrectomy or total gastrectomy might lead to poor postoperative nutrition status and conditions, making patients become poor-tolerated to hematological toxicity from chemotherapy [1,2]. Currently doublet and triplet regimens have been widely used in the treatment for gastric cancer [3,4,5]. However, evidence-based data on frequency, severity and risk factors of myelotoxicity that is associated with those commonly used regimens are scarcely available. Additionally, identification of subgroup of gastric cancer patients with high risks of developing myelotoxicity events and would benefit from early intervention is of utmost importance to improve patients' life quality.

Patients eligible for assessment were those of aged ≥18, pathologically confirmed as gastric cancer and being treated with at least 3 cycles for regimen CF/XP; EC(O)F/EC(O)X; DC(O)F/DC(O)X; PC(O)F/PC(O)X; 4 cycles for FOLFOX4 and more than 6 cycles for mFOLFOX7/XELOX, regardless of stage and prior treatment history.

Follow up data of haematological laboratory values were obtained with a minimum of 3 times per week or more if indicated during one chemotherapy cycle, with relative blood test dates being registered.

Clinical impacts mainly included chemotherapy delay and dose reduction≥20%. Chemotherapy delay was considered as the interval between cycles increased ≥ 7 days or cycles being discontinued. Chemotherapy regimens were categorized as “standard” if therapeutic agents were delivered at the planned doses and schedules, or “reduced” when the doses reduction exceeded≥ 20%.

All of the statistical analyses were performed using SPSS version 22.0 (Chicago, IL, USA) and SASR package version 9.1.2 (SAS Institute Inc., Cary, North Carolina). Differences were assumed to be statistically significant when P value was less than 0.05. The collected data were summarized using descriptive statistics and presented as means (SDs), medians (range) for continuous variables, and as percentages for categorical variables. Patient's data were stratified by chemotherapy regimens. Group comparisons were based on Chi-square test for categorical variables, and those for continuous variables were based on Student's t test for normally distributed variables and the Mann-Whitney U statistic for all other variables. Time to develop moderate-to-severe myelotoxicity for six regimen strata was compared by log-rank test, and results were expressed by using Kaplan-Meier curve. Multivariate logistic regression analysis was assessed to estimate the odds ratios and identify the predictive factors independently associated with frequency of each myelotoxicity indices among various regimen groups.

Since 87 patients whose data was ineligible or uncompleted for evaluation, the analysis population consisted of 1,285 patients. The disposition of the patient population was summarized in Supplementary Fig.1.

Prevalence of myelotoxicity at baseline

Incidence of myelotoxicity during chemotherapy

The frequency of myelotoxicity (i.e. anaemia, thrombocytopenia, neutropenia and leukopenia) was defined as patients who developed myelotoxicity either before chemotherapy or during the study period. Fig. 1 depicts myelotoxicity frequency profiles for overall and six regimen groups. 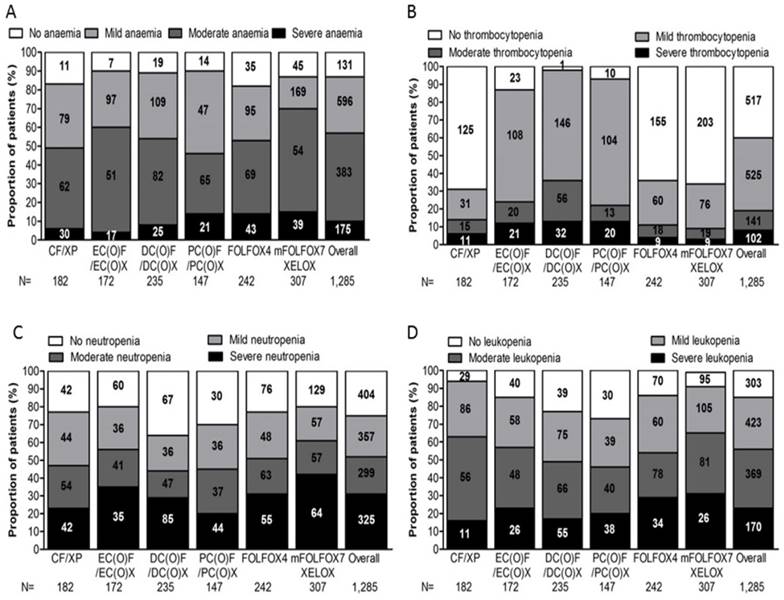 Baseline demographics and clinical characteristics for analysis population by regimens

The main epidemiological feature of All-Grade myelotoxicity and Moderate-to-Severe myelotoxicity for all six regimens was increasing observed during the first 6 cycles. The increase of the anaemia population has occurred at a slower rate than that of the population with thrombocytopenia, neutropenia and leukopenia. Similar trends have been detected for each regimen. Compared with doublet regimens, the increase of patients with Moderate-to-Severe myelotoxicity who underwent triplet regimens has occurred at a slightly faster rate (Fig. 2).

Identification of predictors for myelotoxicity

In contrast to the overall increasing trend of treatment delays and chemotherapy dose modification during the first 6 cycles, there has been a decline of actual average RDI for all regimen groups.

Reduced dose intensity had two components: planned reductions in dose intensity when the treatment was initiated and unplanned dose reductions and treatment delays that occurred during the chemotherapy. As shown in Supplementary Fig. 2, both planned and unplanned dose reductions in RDI were most common in DC(O)F/DC(O)X regimen group. Statistical significance was observed when compared actual ARDI among all regimen groups. mFOLFOX7/XELOX regimen group was more likely to receive higher ARDI than others, (P=0.000). 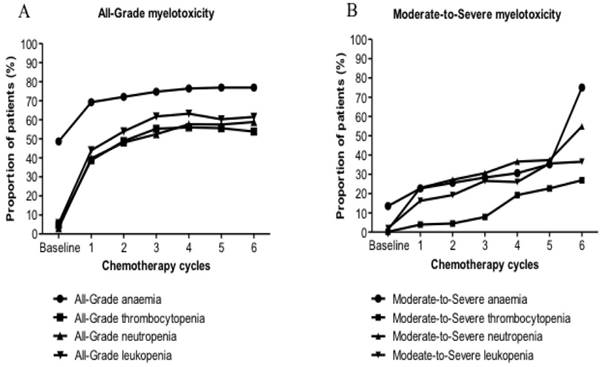 OR*, adjusted for all the variables listed in Table 1.

OR*, adjusted for all the variables listed in Table 1

Gastric cancer, being the fourth most frequent malignant disease worldwide, constitutes the second leading culprit of cancer-related mortality. Despite an increasing use of targeted agents, the mainstay of Oncology management for gastric cancer remains cytotoxic chemotherapy in both curative and palliative settings. Besides survival benefits, shrunk of the tumor size and reduction of disease-associated symptoms, multicycle polychemotherapy could also be life-threatening and dose-limited by their severe hematotoxic effects on bone marrow generation [10].

This multicenter, prospective, observational study for a population of 1,285 Chinese gastric cancer patients treated with six selected cytotoxic conventional regimens in community settings revealed a high prevalence of anaemia at baseline and increasing trend of myelotoxicity incidence over successive cycles. The prevalence, incidence and frequency of myelotoxicity among our study population were much higher than those of other relevant studies in western countries [11,12]. This is probably due to patient and regimen selection bias, the population we studied were those with gastric cancer executively received platinum-based polychemotherapy, which are known to cause myelotoxicity [13,14]. However, other studies included patients with other type of cancers besides gastric cancer patients irrelevant of treatment modes and chemotherapy regimens [15,16]. Patients with gastric cancer commonly presented with obstruction which lead to eating disorder [17]. Plus, tumor growth also exacerbated patients' lack of nutrition. Blood loss from either surgery or tumor for gastric cancer are often more severe than that for other cancer types. Gastrectomy might result in the deficiency of hematopoietic elements, such as, intrinsic factors and Vitamin B12 [18,19]. All those reasons may count for the high prevalence of anaemia among patients with gastric cancer.

Patients in our study underwent six commonly used regimens, CF/XP, EC(O)F/EC(O)X, DC(O)F/DC(O)X, PC(O)F/PC(O)X, FOLFOX4 and mFOLFOX7/XELOX. To our knowledge, few regimen-specific researches on myelotoxicity have been conducted. In our study, CF/XP regimen was more frequently associated with moderate-to-severe anaemia in patients whose Hb count was normal (36.4%) than other regimens (P=0.000). While, DC(O)F/DC(O)X regimen had the highest incidence of severe thrombocytopenia among all regimen groups. PC(O)F/PC(O)X regimen was reported with the highest incidence of neutropenia and leukopenia in patients who did not have neutropenia nor leukopenia before chemotherapy initiation. FOLFOX4 and mFOLFOX7/XELOX regimen groups were recorded with the marginally lower incidence of anaemia, thrombocytopenia, neutropenia and leukopenia. 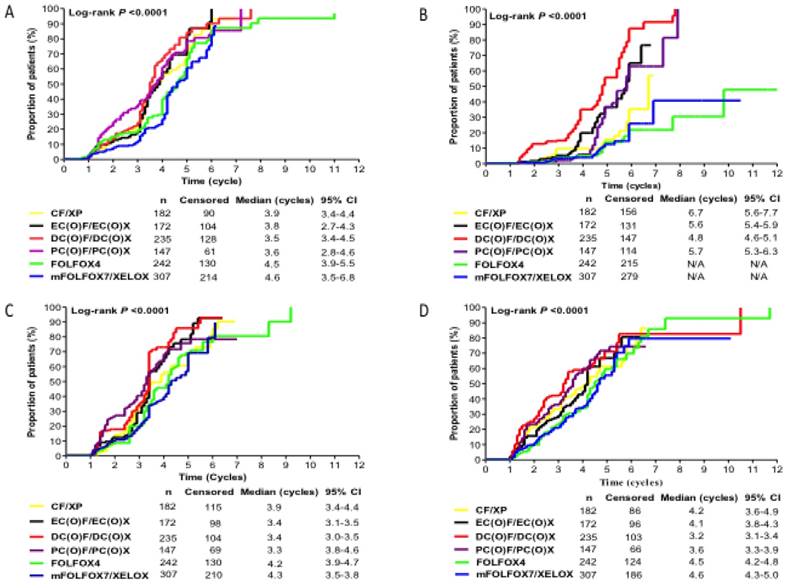 In our study, we also attempted to define the risk factors predictive of myelotoxicity (i.e. anaemia, thrombocytopenia, neutropenia and leukopenia), thereby identifying the subgroup of patients who might benefit from active early interventions in an effort to maintain planned dose delivery. Besides baseline Hb<12.0g/dL, baseline ANC<2.0×109/L, BMI≥23.0 Kg/m2, previously treated with RT, treated with palliative intention, No. cycles received≥4, female gender was found to be associated with the development of moderate-to-severe myelotoxicity events. This is consistent with some previous reports in the treatment for gastrointestinal malignancies, where females experience both greater hematologic and non-hematologic toxicities [23,24]. One possible reason for more myelotoxicity events observed in female population may have to do with influence of the BMI. Females generally have a higher baseline BMI than males due to the body fat, and this may effect drug distribution and potentially increase toxicity. Obesity and high BMI have been proved to be related with a decrease in drug clearance and resultant increase in the half-life elimination for chemotherapy agents [25].

Female gender, baseline Hb<12.0g/dL, baseline ANC<2.0×109/L, chemotherapy regimens, treated with palliative intention, No. cycles received≥4 were also found to be correlated with severe myelotoxicity. In addition, patients whose primary tumor located at GEJ were at higher risk to develop severe myelotoxicity than those with non-GEJ tumor (OR, 5.71; 95% CI, 4.02-8.33; P=0.023). Patients who had comorbidities with HTN/DM/LD/COPD were more risky to experience severe myelotoxicity that patients without coexisting illness (OR, 1.69; 95% CI, 1.15-2.49; P=0.000). Patients who were previously treated with surgery exhibited more risk in developing severe myelotoxicity events than surgery-naïve counterpart (OR, 2.13; 95% CI, 1.05-4.31, P=0.000). The following possible reasons might explain the results, protein barrier function of glomerular filtration membrane of patients who had comorbidities with HTN/DM were often damaged leading to the loss of protein and insufficient synthesis of Hb [26]; patients with LD were frequently presented with low protein level as liver is major organ for protein synthesis; after patients received either partial or total gastrectomy, their physiological functions and state of the gastrointestinal tract could hardly be recovered regardless of the reconstruction methods, food intake amounts were significantly reduced leading to a poor nutrition status seriously affected patients' bone marrow generating abilities. Additionally heavy blood loss from surgery may also result in the low level of Hb and PLT.

Substantial reductions in chemotherapy dose intensity in 21.1% of the study population was observed in our study. Results has shown that both planned and unplanned chemotherapy dose modifications occur, with treatment delays being observed in 214 patients calculating to 16.7% of the study population, resulted in reduced ARDI. The frequency of treatment delays and dose reductions reported here are in consistency with those observed in a study led by an Italian group in 2009 [27,28]. Although data on long-term survival outcomes are not accessible in our study, evidence on the impact of reduced dose intensity on survival in patients have been accumulating. So future studies concerning how reduced dose intensity influence treatment outcomes and survival is highly demanded.

In conclusion, our study revealed that changing patterns of hematopoietic system of patients with gastric cancer before and after chemotherapy. Myelotoxicity events were frequently observed within the gastric cancer population undertaking multicycle polychemotherapy. Predictive models based on risk factors identified for moderate-to-severe myelotoxicity should enable the targeted use of appropriate supportive care in an effort to facilitate the delivery of full chemotherapy doses on schedule.

8. Peintinger F, Georgoulopoulos A, Ralph G. et al. Retrospective comparison of chemotherapy-induced myelotoxicity in patients with ovarian cancer under and over 60 years of age. J Chemother. 2006;18:656-61