Background: miRNAs have an important role as their deregulation is linked to endometrial cancer.

Methods: A custom miScript® miRNA PCR Array was used to investigate for the first time the expression of eight miRNAs in forty-nine histologically confirmed Liquid Based cytology endometrial samples. The expression profile of the same miRNAs was also examined in sixty formalin-fixed tissue samples.

Results: Expression of seven miRNAs was significantly higher in malignant samples with three of them (mir-182, mir-141 and mir-205) performing optimally.

Conclusion: These results suggest the potential use of this non-invasive method of sampling for miRNA expression studies. Furthermore miRNA overexpression could serve as an ancillary or reflex test for optimal identification of malignant samples especially in morphologically inadequate samples.

Endometrial cancer (EC) is the seventh most common cancer among women worldwide and the most common gynaecologic malignancy in Western countries [1]. Despite its high prevalence, the molecular mechanisms with a key role in the development of this cancer are still not fully elucidated. Apart from hormonal association in the progression of EC, several genetic implications have so far been described, including gene mutations, oncogene activation or tumour suppression gene inactivation [2, 3]. The role of miRNAs has been clearly considered important, since their deregulation is linked to cancer, a number of studies having so far elucidated this relationship [4, 5]. In endometrial cancer studies, a differential expression of miRNAs between endometrioid samples and normal tissue has been identified and their role in diagnosis, treatment and prevention has been described to be of utmost importance [6-8].

Evaluation of abnormal uterine bleeding is usually performed via dilatation and curettage. However, collection of endometrial cells via direct endometrial sampling and cytological evaluation through Liquid Based Cytology (LBC) has been used as an alternative, less interventional diagnostic procedure [9]. This study aims to explore the expression profile of miRNAs, whose important role in endometrial carcinogenesis has been described [10], in histologically confirmed LBC endometrial samples and compare the results to formalin-fixed paraffin embedded (FFPE) samples.

A hundred and nine (109) samples were enrolled from women (28-85 years of age, mean 57.1). Forty-nine samples were direct endometrial cytological samples stored in PreservCyt solution from women attending the outpatient clinics of both the 3rd Department of Obstetrics and Gynaecology of the University General Hospital “ATTIKON” and the Department of Obstetrics and Gynaecology of “Saint Savvas” Anticancer Hospital between May 2012 and May 2015. These included samples from women referred due to abnormal uterine bleeding or due to increased endometrial thickness in ultrasound examination. Sixty FFPE samples were used to establish miRNA expression levels. As controls, in both LBCs and FFPEs groups, histological confirmed benign samples from women who underwent hysterectomy for non-EC related reasons or endometrial curettage were used. Ethical approval was obtained from the Bioethics Committee of the hospitals and all women gave a written consent.

RNA from FFPE and LBC samples was extracted with the miRNeasy FFPE Kit (Qiagen) and miRNeasy mini kit (Qiagen). RNA's quantity and quality was assessed using QIAxpert (Qiagen). Reverse transcription and amplification was performed in one step with the use of a custom miScript® miRNA PCR Array (Qiagen). The array plate was designed for Applied Biosystems 7500 Fast Real-Time PCR (Applied Biosystems, Foster City, CA, USA) to profile the expression of mir-9-5p, mir-125-5p, mir-141-3p, mir-182-5p, mir-200b-3p, mir-200c-3p, mir-205-5p and mir-222-3p. As normalization controls of the array data two small nucleolar RNAs (SNORD61, SNORD68) were used as endogenous controls. Replicate positive PCR controls as well as reverse transcription controls were included and all samples were run in duplicates.

Normalization of the miRNAs was performed using the geometric mean of all the histological benign samples and the relative expression was calculated with the ΔΔCt method. Stability of normalization was verified using the geNorm macro, which displayed the lowest variation when using the two SNORDs (M=0.56). One polyp and an endometrial carcinoma, from the FFPE samples, and two benign as well as one carcinoma, from the LBC samples displayed Ct values>32 for the SNORDs and were excluded from the analysis. All statistical analysis was performed in SPSS using non-parametric tests for difference of means (Mann-Whitney) and correlations (Spearman).

The only miRNA that remained stable across all samples was mir-125-5p (Table 1, Figure 1). Most of the remaining were significantly overexpressed in malignant samples when compared to either the benign samples or any of the non-malignant categories. mir-222-3p and mir-9-5p were significantly overexpressed in malignant samples compared only to benign for both types of samples. However, they displayed variable results when compared to other categories. The only miRNA that showed a gradual increase as histology progressed from benign to polyp, atypical and malignancy was mir-141-3p reaching significance across all categories. The rest of the overexpressed miRNAs had similar levels of expression to benign samples and a steep overexpression was observed in malignancy.

In general, LBC samples displayed higher variance in expression of miRNAs and this was evident across all categories (Table 1, Figure 1). This was caused, most probably, due to lower concentration of isolated miRNAs as mirrored by the significant higher Ct values for SNORDs (28.75 vs. 19.95, p<0.001) and most miRNAs across histology categories. 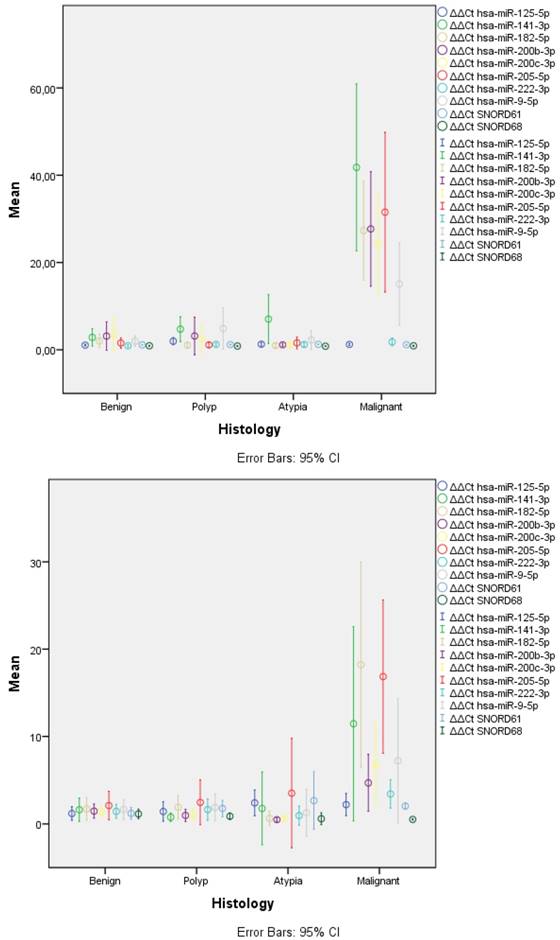 Our data represents, for the first time to our best knowledge, analysis of miRNAs in histologically confirmed cytological material collected via direct endometrial sampling and processed by Liquid Based Cytology. According to the statistical calculations, the most robust overexpression was recorded for mir-182, mir-141 and mir-205 for both LBC and FFPE samples.

miRNA-182 targets gene transcription of the tumour suppressor Transcription Elongation Factor A-like 7 (TCEAL7) gene in Endometrial Carcinoma [1, 11]. As shown mir-182 functions as an oncogenic miRNA in EC [1] and its overexpression is related to cell proliferation promotion by targeting the tumour suppressor gene TCEAL7 while it also modulates the activity of its downstream effectors c-Myc, cyclin D1 and NFκB [12, 13]. Also, up-regulation of mir-182 suppresses FOXO1 gene which in endometrial cancer is down-regulated compared to normal tissue playing an important role in endometrial tumorigenesis [7].

According to Dong et al., [6], the up-regulation of mir-205 and mir-141, which is a member of mir-200 family, might be related to hormone receptor status and prognosis in endometrial carcinomas. The importance of mir-205 and mir-141 miRNAs in endometrial cancer is also reflected to in their ability to regulate the expression of factors important for epithelial mesenchymal transition (EMT) and tumour metastasis [14].

In the present study, our effort was to elucidate whether miRNA analysis overexpression in an endometrial sample type, which is easier accessible as far the patient convenience is concerned, has robust and valuable results. The results of this study, suggest that the expression profiles of mir-182, mir-141 and mir-205, which are proven to have a strong relationship with tumour progression of this gynaecologic malignancy, could potentially serve as biomarkers to differentiate among non-malignant and malignant samples when an endometrial LBC sample is used. More significantly, four histologically verified carcinomas that were cytologically evaluated as inadequate (n=3) or benign (n=1) would all be identified by using those three miRNAs, since in all four cases, two of these three miRNAs were overexpressed by a value higher than the cut-off set to still have 100% specificity. Certainly, a larger cohort of samples is needed to be examined, so that the trend that is described here would be reproduced. However, these preliminary results are promising, as they may have a high prognostic impact without unnecessary interventional procedures.