Objectives: Osteosarcoma is the most common malignant bone tumor in adolescents; however, the mechanisms involved in the pathogenesis and progression of osteosarcoma remain to be elucidated. Researchers have provided valuable insights into the tumorigenesis of Ribosomal protein S9 (RPS9) in some cancers. The purpose of this study was to elucidate the expression, functions, and mechanisms of RPS9 in human osteosarcoma. Methods: The expression of RPS9 in osteosarcoma tissues and cell lines was evaluated by qRT-PCR and western blotting. Knockdown of RPS9 induced by RNA interference (RNAi) method in three osteosarcoma cell lines (MNNG/HOS, MG63, and U2OS) was employed to analyze the effects of RPS9 on cell proliferation and cell cycle distribution. The host signaling pathways affected by RPS9 were detected using the intracellular signaling antibody array kit PathScan®. Results: The expression of RPS9 was found to be up-regulated in human osteosarcoma tissues and cell lines. Its expression was positively correlated with Enneking stage and the tumor recurrence. Down-regulation of RPS9 inhibited osteosarcoma cell proliferation, colony-forming ability, and cell cycle G1 phase in vitro. In addition, our data demonstrated that knockdown of RPS9 repressed the protein levels of phospho-SAPK/JNK and phospho-p38. Conclusion: RPS9 is up-regulated and has a pro-tumor effect in osteosarcoma through the activation of MAPK signaling pathway and thus can be used as a potential target for gene therapy.

Osteosarcoma, the most common primary bone malignancy, occurs most frequently in children and adolescents [1]. Although the development of combination treatment, including limb salvage surgery and neoadjuvant chemotherapy, has significantly increased the survival rates in patients with osteosarcoma from 20 to 75% [2-4], overall clinical outcomes remain unsatisfactory, especially for patients with metastasis or recurrent osteosarcoma. In recent years, accumulating evidence has validated numerous molecular alterations and tumor-related signaling pathways involved in the pathogenesis and progression of osteosarcoma [5, 6]. However, the highly complex molecular mechanism of osteosarcoma has not been elucidated. Thus, there is an urgent need to search for novel markers in order to develop new therapeutic strategies and predict clinical outcomes in osteosarcoma.

RPS9, a novel NPM1 interacting protein, is one of the first proteins that directly bind to the 18S rRNA [7-9]. RPS9 can be detected in the nucleoli and cytoplasm of mammalian cells [7] and it has been implicated in translation elongation, including mRNA unwinding and decoding accuracy. RPS9 plays an essential role in the early stages of ribosome biogenesis; knockdown of RPS9 results in the accumulation of the 45S and 30S pre-rRNAs, causing decreased global protein synthesis [10, 11]. Several studies have reported the role of RPS9 in tumorigenesis; however, the function and underlying mechanism of RPS9 in osteosarcoma remains unclear.

From 2013 to 2014, a total of 50 patients with osteosarcoma were treated at the Shanghai Jiao Tong University Affiliated Sixth People's Hospital, who received primary surgical treatment and preoperative and postoperative neoadjuvant therapy. Each osteosarcoma sample, together with the corresponding non-tumor tissue sample, was obtained during surgery. The samples were immediately frozen in liquid nitrogen after resection and stored at -80 °C in a refrigerator. Ethics approval was obtained from the local hospital ethics committees, and written informed consent was obtained from each patient prior to sample collection.

Human RPS9 siRNA and siRNA nonspecific control were synthesized by Ribobio (Guangzhou, China) and were transfected into cells using Lipofectamine 2000 (Invitrogen) following the manufacturer's protocol. The sequence of siRNA targeting RPS9 was: GTCTCGACCAAGAGCTGAA. For proliferation and cell cycle assays, as well as for RNA extraction and western blotting, cells were used 48 h after transfection.

48 h after transfection, cells were seeded into a 96-well plate (3000 cells/well). A 10-μL aliquot of CCK-8 (Dojindo, Kumamoto, Japan) was added to the wells in triplicate, incubated for 2 h, and the absorbance at 450 nm was measured. Each measurement was performed in triplicate, and all experiments were repeated twice.

48 h after siRNA transfection, MNNG/HOS, MG63, or U2OS cells (1 × 103 cells/well) were cultured in 6-well plates for 10 days, followed by 100% methanol fixation for 30 min and 0.1% crystal violet staining for 30 min. The cell colonies were counted; all assays were independently performed in triplicate.

Forty-eight hours after transfection, the cells were harvested and lysed on ice with 0.1 ml of cell lysis buffer containing a cocktail of protease inhibitors for 5 min. The lysates were centrifuged at 10,000 g at 4 °C for 10 min. Intracellular signaling molecules were detected using a PathScan® intracellular signaling array kit (Cell Signaling Technology, #7744) according to the manufacturer's procedure. The fluorescent images of the slide were captured with Odyssey® Infrared Imaging System (LI-COR) and intensities of the spots were quantified using Image Studio analysis software.

A standard IHC staining procedure was followed. Briefly, paraffin-embedded sections (4-μm-thick) were dewaxed in xylene, followed by heating in a microwave at 60 °C for 20 min in EDTA buffer (pH 9.0) for antigen retrieval. For each slide, endogenous peroxidase activity was blocked by a 10-min incubation in 0.3% H2O2 followed by incubation at 37 °C with a 1:100 diluted primary antibody RPS9 (Proteintech, China). Slides were rinsed three times in PBS, incubated for 30 min with EnVision staining kit (DAKO, Denmark), followed by three additional washes in PBS, and color development over 3-10 min in a moist chamber at room temperature using 3,3′-diaminobenzidine (DAB). Thereafter, the slides were counterstained in hematoxylin and dehydrated using a graded series of ethyl alcohol (70%, 90%, and 100%). For sections used as negative controls, the primary antibody was substituted by PBS. IHC signal intensities were scored as follows: 0 (no staining), 1 (staining in <1% cells), 2 (staining in 1%-10% cells), or 3 (staining in >10% of cells). The samples scored as 0 and 1 were considered negative, while the samples scored as 2 and 3 were considered positive. Assessment of IHC staining was independently performed by two expert pathologists, and any discordance was resolved through discussion and consensus.

Data were compiled and analyzed using SPSS version 21.0 (SPSS Inc., Chicago, IL, USA). The differences between groups were compared using a two-tailed Student's t-test. Correlations between the IHC of RPS9 and the clinicopathological parameters were determined using the Chi-Square Test. A P < 0.05 was considered significant.

To explore the functional significance of RPS9 in osteosarcoma, RPS9-specific siRNA was used to knockdown RPS9 in osteosarcoma cells. RPS9 knockdown was validated using qRT-PCR and western blotting. RPS9 mRNA and protein expression were significantly reduced after transfection with RPS9-specific siRNA in MNNG/HOS, MG63, and U2OS cells (Figure 2A-2F). Next, cell proliferation was detected using the Cell Counting Kit-8 (CCK-8) assay [18]. A 5-day growth curve analysis showed that knockdown of RPS9 significantly inhibited the growth of osteosarcoma cells (Figure 2G-2I). The colony forming assay was carried out to determine the colony-forming capacity of osteosarcoma cells after knockdown of RPS9. It was found that both the number and the size of colonies were notably decreased in the RPS9 knockdown group compared to that in the control group (Figure 2J-2O). These results demonstrate that RPS9 plays an oncogenic role in osteosarcoma. 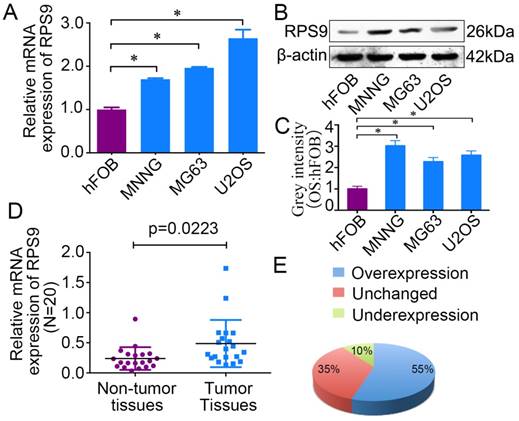 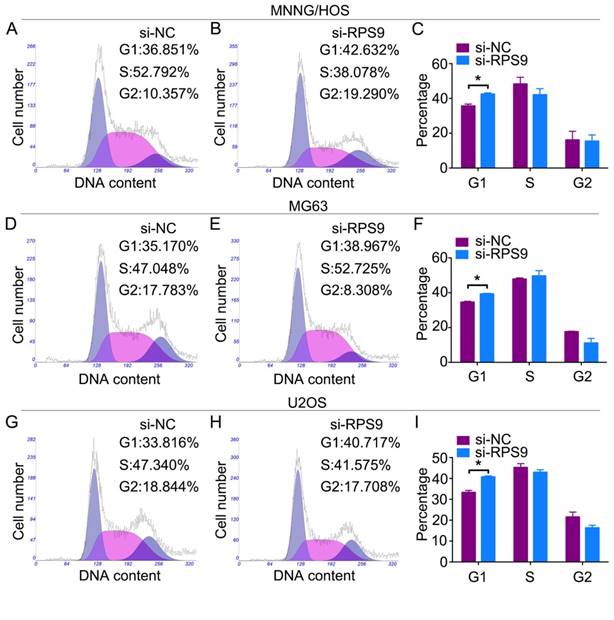 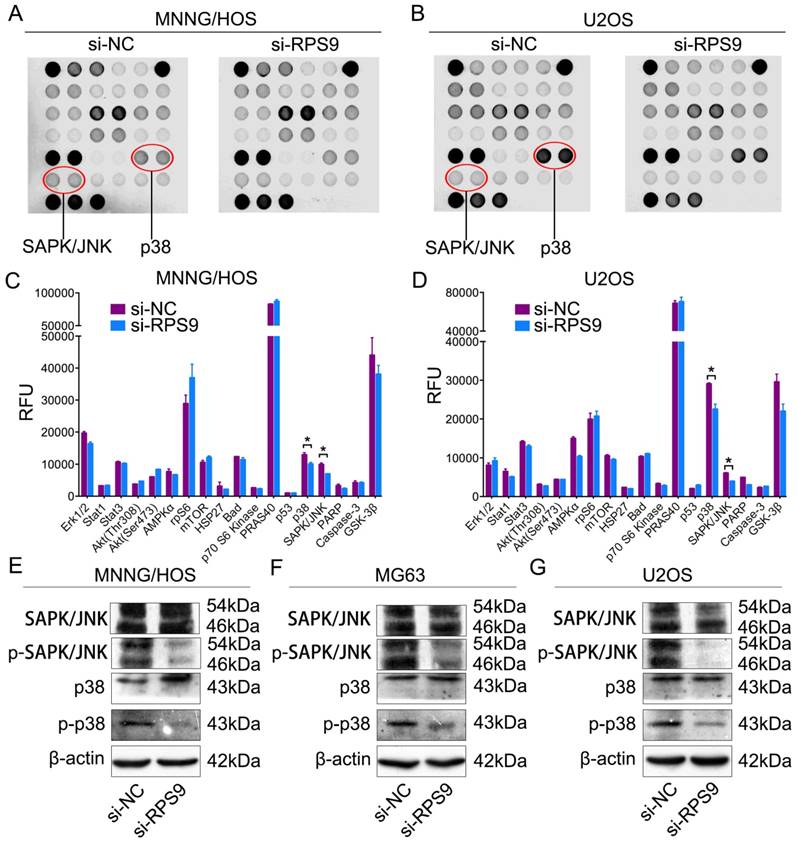 Osteosarcoma is the most common type of malignant bone tumor characterized by high levels of genetic instability, with a peak incidence in the second and third decades of life [19]. The survival rate of patients has increased four-fold from the 1960s to the 1980s. However, the 5-year survival rates have remained unchanged during the last three decades, owing to the development of insensitivity to chemotherapy [20]. Uncovering the molecular mechanisms underlying the carcinogenesis and progression of osteosarcoma may help to identify effective therapies for treatment of the disease. 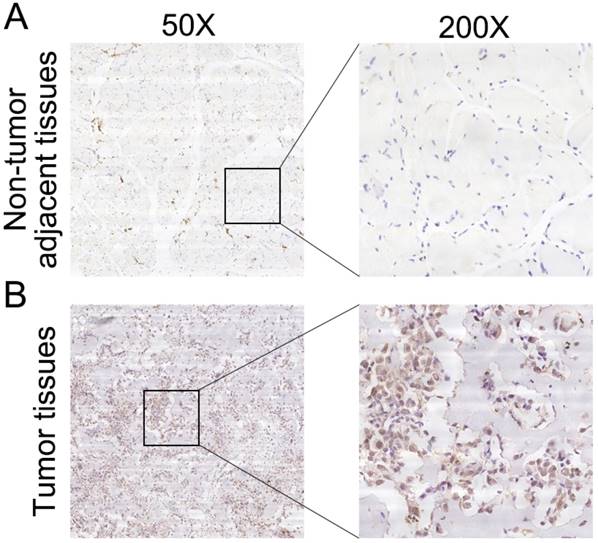 The ribosome is composed of two subunits consisting of a complex of ribosomal RNAs (rRNAs) and ribosomal proteins (RPs) [21]. Recently, ribosomal proteins have gained much attention for their role in extraribosomal processes, including DNA repair, apoptosis, proliferation, and metastasis [22, 23]. RPS3, a component of the 40S ribosomal submit, inhibits the invasion of fibrosarcoma cells by blocking the ERK pathway and MMP-9 secretion [24]. Proteomic profiling of an experimental tumor metastasis model determined 45 ribosomal proteins, of which several proteins were differentially expressed in metastatic M4A4 cells, including RPS10 and RPL39 [25]. Chen et al. reported that down-regulation of RPS6 inhibited the growth of non-small cell lung cancer by inducing G0-G1 cell cycle arrest and shortened the overall survival and relapse-free survival in p-rpS6-overexpressing patients [26].

In this study, we demonstrated that RPS9, a member of ribosomal proteins, was upregulated in osteosarcoma cell lines and osteosarcoma tissue samples in comparison with that in corresponding adjacent non-tumor tissues. Knockdown of RPS9 impaired osteosarcoma cell proliferation, as well as the colony-formation ability, and led to a G1 cell cycle arrest. These results indicated that RPS9 played a critical role in osteosarcoma cell growth by acting as an oncogene. Tian et al. reported that RPS9 showed an aberrant promoter hypermethylation and played a critical role in colorectal tumorigenesis [27]. Another study showed that RPS9 silencing impaired 18S rRNA production and induced the activation of p53 in glioma cells, which subsequently resulted in the inhibition of cell proliferation [11]. However, Lemoine et al. reported that RPS9 was down-regulated in pancreatic cancer tissues compared to in normal pancreas, thus suggesting its role as a tumor-suppressor gene in pancreatic cancer [28]. Through the analysis of putative prognostic markers (CDK4, IGFBP2, MMP2, and RPS9) in a set of 43 astrocytic gliomas, 41 glioblastomas, and 7 adjacent normal brain tissues, RPS9 was found to be a significant favorable prognostic marker in gliomas [29]. Similarly, in the present study, we found that the expression of RPS9 was positively correlated with the recurrence and Enneking stage of osteosarcoma, as evidenced by the IHC staining results.

It has been reported that depletion of RPS9 can impair the production of 18S ribosomal RNA and thus reinitiate the differentiation process by inducing p53 activity [11]. Another study reported that RPS9 bound to NPM1 and that the expression of a subset of RPS9 deletion mutants resulted in altered nucleolar morphology, as evidenced by changes in the localization patterns of NPM1 [7]. In the present study, in order to further investigate the underlying mechanisms of RPS9, we used the intracellular signaling antibody array kit PathScan® to identify the host signaling pathways that might be affected by knockdown of RPS9. The data revealed a slight decrease in phosphorylation of some components of MAPK pathway, including SAPK/JNK and p38, in RPS9-knockdown cells. Next, we detected changes in the MAPK pathway after RPS9 knockdown by western blotting. The results showed that knockdown of RPS9 inhibited the phosphorylation of SAPK/JNK and p38, indicating that RPS9 influences osteosarcoma progression partly through the MAPK signaling pathway. The possible underlying mechanism of RPS9 to regulate MAPK signaling pathway is as follows. It was reported that RPS9 was a novel NPM1 interacting protein [7]. Meanwhile, a previous literature reported that NPM1 silencing reduced prostate cancer cell growth through the inhibition of MAPK signaling [14]. Therefore, RPS9 may interact with NPM1 to regulate MAPK signaling pathway in osteosarcoma cells.

All procedures performed in studies involving human participants were in accordance with the ethical standards of Shanghai Jiao Tong University and with the principles of Declaration of Helsinki.

7. Lindström MS. Elucidation of motifs in ribosomal protein S9 that mediate its nucleolar localization and binding to NPM1/nucleophosmin. PLoS One. 2012;7:e52476