Purpose: Colorectal cancer is the third most common cancer and also the fourth most common cause of cancer mortality worldwide. For rectal cancer, neoadjuvant concurrent chemoradiotherapy (CCRT) followed by radical proctectomy is gold standard treatment for patients with stage II/III rectal cancer. By data mining a documented database of rectal cancer transcriptome (GSE35452) from Gene Expression Omnibus, National Center of Biotechnology Information, we recognized that DUOX2 was the most significantly up-regulated transcript among those related to cytokine and chemokine mediated signaling pathway (GO:0019221). Hence, the aim of this study was to assess the DUOX2 expression level and its clinicopathological correlation and prognostic significance in patients of rectal cancer.

Conclusion: DUOX2 may play a pivotal role in carcinogenesis, tumor progression and response to neoadjuvant CCRT in rectal cancers, and serve as a novel prognostic biomarker. Additional researches to clarify the molecular and biochemical pathways are essential for developing promising DUOX2-targeted therapies for patients with rectal cancers.

DUOX2 gene encodes dual oxidase 2 (DUOX2) protein, which belongs to NOX/DUOX family or NOX family of NADPH oxidases. In the family of NOX/DUOX, there are seven members: NOX1, NOX2, NOX3, NOX4, NOX5, dual oxidase 1 (DUOX1), and dual oxidase 2 (DUOX2). All of them contain homologs to the catalytic element of phagocytic NADPH-oxidase, gp91phox [7]. DUOX1 and DUOX2 genes are located on the human chromosome 15 and their encoding proteins, DUOX1 and DUOX2, are two closely-related isoforms and originally found in the thyroid gland [8-10]. DUOX1 and DUOX2 are associated with the production of thyroid hormone. DUOX-derived H2O2 is important for the biosythesis of thyroid hormone and the host antimicrobial defense of the major respiratory tract, oral cavity and gastrointestinal tract [11, 12]. Thus, the name of dual oxidase is due to containing both NADPH-oxidase (gp91phox) domain and peroxidase homology domain. The impact of dual oxidase 2 in carcinogenesis is recently investigated, including colon cancer [13-18]. Nevertheless, no relationship between DUOX2 expression and clinical outcome is reported in patients with rectal cancer. Thus we retrospectively studied the association between the expression of DUOX2 protein by immunohistochemistry and significant clinical and pathological parameters, as well as different survival indices in patients with rectal cancer scheduled to receive preoperative CCRT.

A public transcriptomic database (GSE35452), comprising 46 patients of rectal cancer doctored with preoperative chemoradiation therapy from Gene Expression Omnibus, National Center for Biotechnology Information (GEO, NCBI, Bethesda, MD, USA), was selected for research. The tumors were subdivided into “responder” and “non-responder” according to the response to neoadjuvant CCRT. We downloaded the raw .cel file and performed comparative analysis without filtering or preselection by the software--Nexus Expression 3 (BioDiscovery, El Segundo, CA, USA). Under supervision, the statistical significance of each transcript by comparing responder and non-responder was examined, focusing on the genes related to cytokine and chemokine mediated signaling pathway (GO:0019221). The transcripts with expression fold change > ± 0.1 log2 ratio and P-value < 0.01 were selected for additional evaluation.

Study cohort of patients and specimens

The Institutional Review Board of Chi-Mei Medical Center approved this study. Totally 172 patients with primary rectal adenocarcinoma were enrolled from Chi-Mei Medical Center between 1998 and 2004. All of the selected patients received preoperative chemoradiation therapy followed by radical proctectomy. The primary clinical stage was determined by endoscopic ultrasound (EUS) and abdominal and pelvic computed tomography (CT). Patients with distant metastasis at initial diagnosis (cM1), screened by chest X-ray and abdominal and pelvic CT, were excluded. The clinical information was retrieved from the archives of medical records. The details of patient selection and the protocol of treatment were the same as preceding description [19].

Post-treatment stage was based on pathological examination of radical proctectomy specimen according to 7th edition of American Joint Committee on Cancer (AJCC) cancer staging system [20]. The grading system of tumor regression after preoperative chemoradiotherapy was evaluated in accordance with the description of Dworak et al. [21]. Dworak's tumor regression grade (TRG) is a five-tier system: grade 0 indicates no regression; grade 1 indicates dominant tumor mass with obvious fibrosis; grade 2 indicates dominantly fibrotic changes with few tumor cells or groups; grade 3 indicates very few tumor cells; grade 4 indicates no tumor cells. The method of immunohistochemistry is the same as that we reported previously [22-25]. Briefly speaking, paraffin-embedded tumor biopsy tissue specimens before neoadjuvant CCRT were administered the routine procedure of deparaffinization, rehydration, and epitope retrieval. Subsequently, the tissue sections were proceeded to incubation with primary antibody against DUOX2 (1:200, polyclonal, Abcam, Cambridge, United Kingdom) for one hour. Normal thyroid tissues with and without incubation of DUOX2 antibody were run parallel as positive and negative control, respectively. We assessed the expression of DUOX2 protein by combination of the intensity and percentage of immunoreactivity in the cytoplasm of tumor cells to produce an H-score. The equation is shown below: H-score = ΣPi(i+1), in which Pi symbolizes the percentage of stained tumor cells (0%-100%) and i symbolizes the intensity of immunostain (0-3+).

IBM SPSS Statistics software, Version 22.0 (IBM Corporation, Armonk, NY, USA) was used for statistical analyses. After dividing the study cohort into high- and low-expression of DUOX2 by the median H-score of DUOX2 immunostaining, Pearson's Chi-square test was used for the relationship between DUOX2 immunoreactivity and categorical important clinical and pathological parameters. Three prognostic indices—disease-specific survival (DSS), local recurrent-free survival (LRFS) and metastasis-free survival (MeFS) were calculated from the days of surgery to those of events happened. Kaplan-Meier survival curves compared with log-rank test was used for univariate survival analysis. Parameters with statistical significance in univariate analyses were enrolled in multivariate ones, for which, Cox model was used. For all analyses, only P value < 0.05 was considered as statistically significant under two-tailed tests.

DUOX2 identified as the most significantly up-regulated gene among those belonging to cytokine and chemokine mediated signaling pathway (GO:0019221)

In the public transcriptomic dataset of rectal cancer (GSE35452) from GEO, NCBI, 52.2% patients (n=24) revealed response to preoperative chemoradiotherapy (referred as responder), while 47.8% patients (n=22) showed resistance to preoperative chemoradiotherapy (referred as non-responder). Five probes covering four transcripts associated with cytokine and chemokine mediated signaling pathway (GO:0019221) were found. Of these, three probes covering DUOX2 and DUOX1 transcripts and two probes covering TGM2 and EREG transcripts exhibited significant up- and down-regulation in non-responders than in responders, respectively (Fig. 1). Among the up-regulated genes, DUOX2 was the most significantly up-regulated one, where the log2 ratio of DUOX2 mRNA by comparison between non-responders and responders was 1.1477 (P = 0.0001, Table 1).

Analysis of gene expression in rectal cancers with preoperative concurrent chemoradiotherapy by using a published transcriptome dataset (GSE35452). Conducting a clustering analysis of genes by focusing on cytokine and chemokine mediated signaling pathway (GO:0019221) revealed that DUOX2 is the most significantly up-regulated gene in non-responder comparing with responder. Tumors classified as responder (yellow) or non-responder (blue) were illustrated at the top of the heat map, and the up-regulation and down-regulation of gene expression were represented as a continuum of brightness of red or green, respectively. Tumors with unchanged transcriptional level were in black. 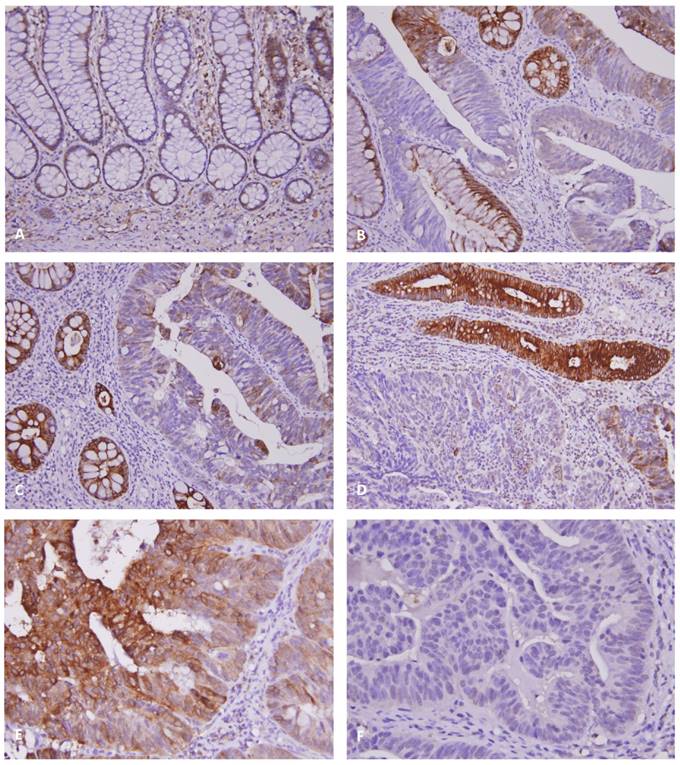 DUOX2 was originally found in thyroid gland tissue by cloning from thyroid cDNA libraries [26, 27]. Two NADPH oxidase genes were identified and named thyroid oxidases (THOX1 and THOX2) due to considering thyroid specific. They localize at the apical membranes of the follicular cells and catalyze the oxidation of NADPH to generate hydrogen peroxide (H2O2), which is necessary for thyroid hormone biosynthesis by thyroperoxidase (TPO) [28]. Mutations of the THOX2 gene are also associated with congenital hypothyroidism [9]. However, two thyroid oxidases were later found in tissues other than thyroid glands, such as salivary glands, gastrointestinal tracts and respiratory tracts, where these two oxidases provide sources for mucosal host defense against microbiome [9, 30-32]. The amino acid sequences of both THOX1 and THOX2 conclude an extracellular peroxidase-like domain, in addition to NADPH-oxidase domain. Therefore, the terminology had been changed to dual oxidases (DUOX1 and DUOX2) [28]. Both human DUOX1 and DUOX2 genes are located on the chromosome 15q15.3 and share 83% similarity in the DNA sequences with each other [27]. Both DUOX1 and DUOX2 proteins contain seven transmembrane helices with two heme-binding sites, an extracellular peroxidase-like domain, two intracellular calcium-binding EF-hand motifs and a NADPH binding region [26, 27].

Although dual oxidases contribute to mucosal host defense against microorganism via generation of hydrogen peroxide (H2O2), the subsequent oxidative stress and reactive oxygen species (ROS) are also implicated in chronic inflammation [33]. DUOX2-induced ROS may cause chronic inflammatory pre-neoplastic disorders, e.g., inflammatory bowel disease and chronic pancreatitis [12, 34, 35]. Chronic inflammation and an imbalance between oxidants and antioxidants in organisms also play an important role in carcinogenesis of certain cancers [36-38]. In consequence, DUOX2 is highly expressed in several cancers, including colorectal cancer [13, 15-18]. By immunohistochemistry, overexpression of DUOX2 was observed in the majority of colon cancers (62%), breast cancers (66%), non-small cell lung cancers (86%) and prostate cancers (92%) [15]. In a later study, both mRNA and protein levels of DUOX2 revealed significant up-regulation in gastric and colorectal cancers compared with adjacent normal tissue (all P ≤ 0.01) [16]. High expression of DUOX2 was also an independent prognosticator predicting both lower recurrent-free and overall survival rates in patients with hepatocellular carcinoma after hepatectomy [17]. In pancreatic adenocarcinomas, the expression of both DUOX2 mRNA and protein was found significantly increased compared to the normal pancreatic tissue [18]. In contrast, the transcriptional level of DUOX2 was down-regulated in both human lung cancer cell lines and tissue specimens due to hypermethylation of CpG-rich promoter in the report of Luxen et al. [14]. The discrepancy maybe result from the dual enzymatic activity of DUOX2 per se, both NADPH-oxidase and peroxidase-like domain. Peroxidase serves as an antioxidative enzyme to protect the organism from oxidative stress. Down-regulation of glutathione peroxidase 2 (GPx2), an isoform of the common antioxidative enzyme of human bodies, was also significantly associated with poor prognosis in patients with urothelial carcinomas [38]. In the study of Luxen et al., therefore, the DUOX2 may act as a tumor suppressor gene in lung cancers [14]. In the present study, we also demonstrated the “double-edged sword” role in the carcinogenesis of rectal cancer. In normal colonic mucosa, low-level of immunoreactivity of DUOX2 was observed (Fig. 2A). Along with the transformation into adenomatous lesion, the expression of DUOX2 increased (Fig. 2B). After the carcinomatous change of the colonic adenoma into adenocarcinoma in situ (AIS) and invasive adenocarcinoma, down-regulation of DUOX2 was noted again (Fig. 2B-D). In normal colonic mucosa, DUOX2 play a role in host defense against microbiota. After that, oxidative stress and generation of ROS caused by DUOX2 overexpression may participate in the initial neoplastic transformation. Furthermore, the expression in AIS and invasive adenocarcinoma of rectum became complicated. The immunoreactivity was lower in AIS and invasive adenocarcinoma compared with adjacent adenoma, where down-regulation of the peroxidase-like domain in DUOX2 may contribute to the carcinogenesis. However, higher expression of DUOX2 in rectal cancer was still associated with pre- or post-CCRT disease advancement, and tumor response to CCRT, as well as poor prognosis.

In conclusion, the current work revealed that DUOX2 may play an imperial role in carcinogenesis of rectal cancers. DUOX2 overexpression was associated with adverse clinical and pathological parameters to statistical significance, including poor response to neoadjuvant CCRT. High immunoexpression of DUOX2 was also an independent prognostic factor of inferior DSS and LRFS for rectal cancer patients receiving neoadjuvant CCRT. Further evaluations to clarify the details of the biological and molecular role of DUOX2 in tumorigenesis of rectal cancer are essential for developing the potential DUOX2-targeted therapy for high-risk patients, as we illustrated the promising targets for new therapeutic strategies in patients with rectal cancers [39, 40].