Conclusions: This study confirms an inverse correlation between expression of fascin and expression of BRMS1 using a quite large cohort of human breast cancer tissues. Fascin alone or combined with BRMS1 was a worse prognostic marker, particularly in node-negative breast cancer patients.

The majority of cancer-related mortality (as much as 90%) is associated with metastasis [1]. Acquisition of cell motility is the initial step in cancer invasion and metastasis, and aberrant regulation of the actin cytoskeleton in cancer cells is a fundamental mechanism enhancing cancer cell motility [2, 3]. Filopodia are actin-rich, slender projections on the cell surface that play an important role in cell migration. Fascin is an actin-bundling protein in filopodia that maximally cross-links actin filaments into tight bundles to provide filopodia with rigidity [4]. It is abundantly expressed in some types of normal cells, including neurons, glial cells, endothelial cells, and antigen-presenting dendritic cells [5]. Fascin overexpression is a poor prognostic indicator associated with aggressive clinicopathological features and metastasis in various types of human carcinomas, including breast cancers [6].

A previous study demonstrated that fascin had an inhibitory effect on BRMS1 protein and an inverse correlation with the proteins in breast cancer [13]. However, no reported study has examined the relationship between expression patterns of these anti- and pro-metastatic molecules and patient outcome. We investigate expression patterns of fascin and BRMS1 in human breast cancer tissues and assess whether the two combinatorial markers reflect clinicopathological features.

This study included 183 patients who underwent surgical treatment and were diagnosed with invasive breast cancer at CHA Bundang Medical Center from January 2006 to December 2008. Patients who underwent neoadjuvant chemotherapy before surgical treatment were excluded. Clinical data, including patient age at initial diagnosis, local recurrence, systemic recurrence, and patient survival, were retrieved from electronic medical records. This study was approved by the institutional review board of CHA Bundang Medical Center. Hematoxylin and eosin (H&E)-stained slides of all cases were reviewed by two pathologists (HJ Lee and S Kim). Histological subtypes were classified based on the World Health Organization classification of breast tumors [14]. Histological grade was assessed using the Nottingham grading system [15]. Tumor stage was based on the 7th American Joint Committee on Cancer (AJCC) criteria [16].

A representative H&E-stained slide was selected for each case, and corresponding spots were marked on the surfaces of the paraffin blocks. Two core tissue biopsies (2 mm in diameter) were taken from each paraffin block and arranged in recipient TMA blocks using a trephine apparatus. A normal breast tissue core was included in each TMA block. Each tissue core was assigned a unique TMA number and linked to a database containing the clinicopathological data.

Immunohistochemistry (IHC) staining was performed on the TMA blocks using a mouse monoclonal antibody to fascin (Epitomics, Burlingame, CA, USA; 1:100) and rabbit polyclonal antibody to BRMS1 (Genetex, Irvine, CA, USA; 1:100). Briefly, 4 μm TMA sections were transferred to adhesive slides and dried at 62°C for 30 min. After incubation with primary antibodies, immunodetection was achieved with the addition of biotinylated anti-mouse and rabbit immunoglobulins, followed by peroxidase-labeled streptavidin (a component of a streptavidin-biotin kit), and 3,3'-diaminobenzidine as the chromogenic substrate. Slides were counterstained with Harris hematoxylin.

All IHC-stained slides were interpreted by two pathologists (HJ Lee and S Kim) under a multiview light microscope. Fascin IHC was scored with reference to the intensity and proportion of cytoplasmic staining of tumor cells as in previous studies [17-19]. The proportion of stained tumor cells (0: 0-5%, 1: 6-25%, 2: 26-50%, 3: 51-75%, or 4: >75%) and staining intensity (0: no staining, 1: weak, 2: moderate, or 3: strong) were multiplied and defined as negative (0-3) or positive (4-12). Vascular endothelium exhibited strong staining for fascin and served as a positive internal control. Because BRMS1 expression pattern did not show intratumoral heterogeneity, only the staining intensity was considered in determining the BRMS1 expression level as in a previous study [20]. Nuclear and cytoplasmic staining intensities of BRMS1 were scored separately (0: no staining, 1: weak, 2: moderate, or 3: strong). We obtained the BRMS1 H score (range: 0-6) by summing the nuclear and cytoplasmic scores. Then we defined BRMS1 expression as negative (BRMS1 H score: 0-2) or positive (BRMS1 H score: 3-6). Normal breast epithelium exhibited strong staining for BRMS1 and served as a positive internal control for BRMS1 expression. 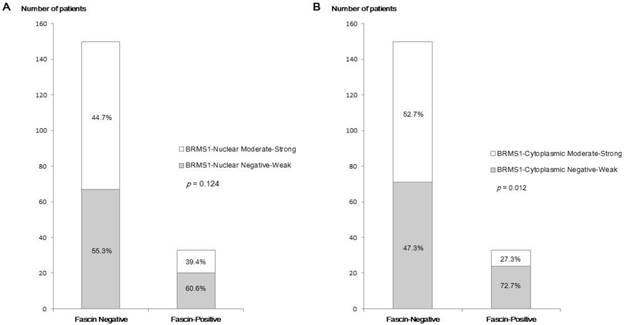 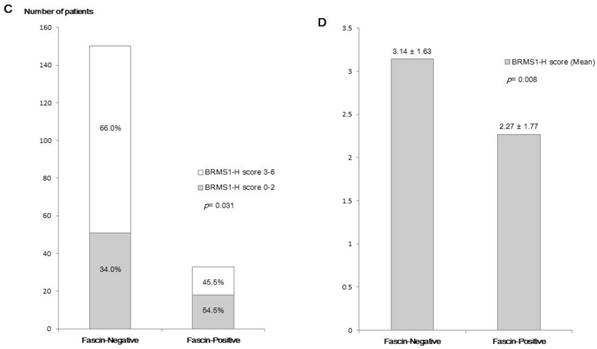 Photomicrographs of representative cases of fascin-/BRMS1+ and fascin+/BRMS1- breast cancers. (a) In contrast to stromal endothelial cells, which are normal internal controls, no fascin staining is observed in tumor cells. BRMS1 is stained in both nucleus and cytoplasm, but nuclear staining intensity is stronger than cytoplasm in this case. (b) Strong cytoplasmic fascin staining is observed in tumor cells, whereas BRMS1 is almost completely disappeared in the nucleus and is stained very faintly only in the cytoplasm 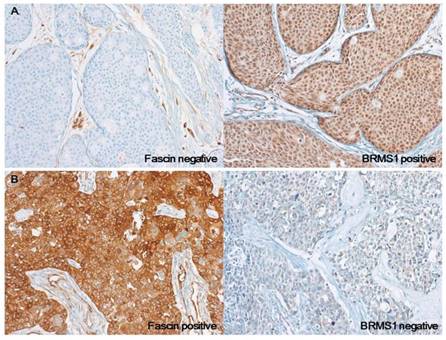 Clinicopathological differences according to fascin and BRMS1 expression

Survival outcome according to clinicopathological differences and fascin/BRMS1 status

Kaplan-Meier survival curves analyzed in node-negative patients only. (a) Disease-free survival (DFS) according to fascin status, (b) overall survival (OS) according to fascin status, (c) difference in DFS between fascin-/BRMS1+ and fascin+/BRMS1- patients, (d) difference in OS between fascin-/BRMS1+ and fascin+/BRMS1- patients. 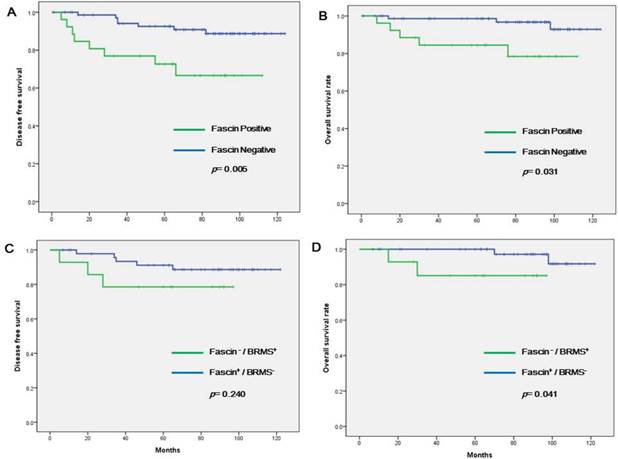 Univariate and multivariate analyses of disease-free and overall survival

We evaluated whether expression patterns of fascin and BRMS1 correlate with clinicopathological features and patient outcome in breast cancer. A previous study demonstrated that fascin promoted breast cancer invasion via upregulating NF-κB activity, urokinase-type plasminogen activator (uPA), and matrix metalloproteases (MMPs) that are essential to metastasis; in contrast, fascin inhibited the nuclear expression of BRMS1 in breast cancers [13]. To assess the importance of the intracellular localization of BRMS1, we separately interpreted the nuclear and cytoplasmic expression of BRMS1. Our results showed that loss of nuclear BRMS1 expression was more frequently observed in fascin+ tumors (although this was not statistically significant). Cytoplasmic BRMS1 expression and combined expression levels of nuclear and cytoplasmic BRMS1 (defined as the BRMS1 H score) showed a significant inverse correlation with fascin expression, which reflects the fact that intracellular expression of BRMS1 is downregulated by fascin.

The BMRS1 sequence contains nuclear export and import signals that enable its nucleus-cytoplasm shuttling [21]. It is not yet fully understood how the anti-metastatic effects of BRMS1 are influenced by its intracellular localization. Two melanoma studies reported that nuclear expression promoted metastatic capacity, whereas cytoplasmic expression suppressed metastasis and increased DFS [9, 22]. By contrast, a breast cancer study reported that a shifting of BRMS1 from the nucleus to the cytoplasm was associated with aggressive features, such as a high proliferation index and a trend toward worse OS [23]. We found that loss of BRMS1 cytoplasmic expression was associated with shorter DFS, whereas nuclear BRMS1 expression status did not affect patient prognosis.

In this study, fascin positivity was significantly associated with various unfavorable clinicopathological parameters, including higher histological and nuclear grades, hormone receptor negativity, and triple-negative subtypes, as in previous studies [17, 24]. Such correlations remained when we compared the clinicopathological characteristics of the fascin-/BRMS1+ and fascin+/BRMS1- tumor subgroups. These results may partially explain why breast cancers with these well-known unfavorable clinicopathological features have a higher possibility of metastasis: They are enriched with metastasis-promoting factors and lack metastasis-suppressing factors.

The only unexpected finding was that axillary lymph node metastasis was observed more frequently in fascin- tumors than in fascin+ tumors. A few previous studies have found a significant positive correlation between fascin expression and lymph node metastasis [25, 26], but other studies have failed, as in this study [17, 24] These inconsistent results are probably due to the fact that various factors besides fascin and BRMS1 contribute to lymph node metastasis under complex interrelationships. Another possible reason may be attributed to the nature of the cohort included in our study. After reviewing the patients' clinicopathological data, we found that most of the TNBC patients in our cohort were in the early stage without nodal metastasis. This probably weakened the importance of fascin as a prognostic factor; thus, we performed an additional prognosis analysis confined to patients without nodal metastasis. In the node-negative patient group, fascin was a significant independent predictor of shortened DFS and OS. In addition, the fascin+/BRMS1- tumor group showed a shorter OS than the fascin-/BRMS1+ tumor group (although this was not statistically significant in multivariate analyses). These results suggest that the fascin positivity and loss of BRMS1 expression contribute to poor clinical outcomes in node-negative breast cancers that generally show a favorable prognosis. In regions where breast cancer screening is widely available, such as in South Korea, node-negative cases account for a high percentage of all breast cancers. About 60% of Korean breast cancer patients are found to have no lymph node metastasis at the time of initial diagnosis [27, 28]. Adjuvant systemic chemotherapy decreases the risk of distant metastasis and death in about 30% of patients with node-negative breast cancer, while the remaining 70% do not achieve additional therapeutic benefit from such treatment [27]. Therefore, it is important to identify biomarkers that can predict and select the patients who are more likely to benefit from adjuvant chemotherapy. To the best of our knowledge, this study is the first to report that positive expression of fascin and/or expressional loss of BRMS1 may be a critical predictor of a poor prognosis in the patients with node-negative breast cancer. For this reason, staining of these two biomarkers is recommended especially in the node-negative patients.

This research was supported by a grant of the Korea Health Technology R&D Project through the Korea Health Industry Development Institute (KHIDI), funded by the Ministry of Health & Welfare, Republic of Korea (grant number: HI16C1559)