Angiosarcomas are rare malignant endothelial-cell tumors of vascular or lymphatic origin, and are among the most aggressive subtypes of soft-tissue sarcomas. The prognosis is poor and treatment is challenging in many cases. PD-1/PD-L1 pathway plays a critical role in immune escape of tumor cells. Recent studies described that PD-L1 is widely expressed in various types of cancer, providing the basis for the development of PD1/PD-L1 antibodies as anti-cancer immunotherapy. Despite the well-known potential of PD-L1 as prognostic and predictive biomarker, only few studies described its IHC expression in cancer subtypes for the extreme difficulty in developing standard protocol with the different antibody clones available.

We analyzed the IHC expression of PD-L1 on a series of angiosarcomas at different body location, showing its aberrant expression in about 66% of samples with no relation with prognosis. Our study allowed us to correctly define PD-L1 staining in angiosarcoma tumor tissues with final purpose to stratify patients for immune checkpoint inhibitors therapies.

Angiosarcomas can arise at different sites and in different organs with distinct features, more frequently in skin and soft tissue, but also in the liver, breast, spleen, bone, or heart.

The most common form of angiosarcoma is cutaneous angiosarcoma, with a higher incidence in elderly patients [2], followed by soft tissue angiosarcomas with a very aggressive clinical behaviour [1], while primary mammary angiosarcoma, affecting a mainly younger females is very uncommon [3].

Several studies suggested that angiosarcomas had a very poor prognosis, with 5-year survival of only 10-15%. This highly aggressive tumour spreads widely, recurs locally and metastasizes early [1].

Surgery is the mainstay of treatment, but the high frequency of local recurrence of this strategy is discouraging. Radiotherapy was generally performed in cases of widely spread and unresectable tumours, but the outcomes were usually unsatisfactory [4, 5]. Therefore, further adjuvant or supportive therapy is necessary for the treatment of angiosarcoma. Recently, chemotherapy and immunotherapy using recombinant interleukin-2 (rIL-2) have been studied as potential treatments [6]. However, the optimal treatment for these tumours has not been clearly established.

PD-L1 is a 40kDa transmembrane protein that is expressed on a wide variety of normal tissues including natural killer cells, macrophages, myeloid dendritic cells, B cells, epithelial cells, and vascular endothelial cells [7]. Recently, several studies showed that PD-1/PD-L1 pathway may have a key role in the interaction of tumor cells with host immune response, and tumor cells PD-L1 expression may serve as a mechanism of adaptive immune resistance [8]. Many human cancers have been shown to express PD-L1 in most of cases, and its expression was also correlated with a poor prognosis, highlighting that it can represents a potential prognostic and predictive biomarker in human solid tumors [9-13]. In support of these experimental evidences, early-phase trials using monoclonal antibodies targeting PD-1 or PD-L1 revealed a real efficacy in patients with refractory tumors [14].

However, recent reports revealed that the expression of the PD-L1 on tumor cells is not uniform, because of different antibodies clones, with variable specificity, often doubtful topographical localization and not well defined score.

The purpose of this study was to analyze the immunohistochemical expression of PD-L1 to define adequate evaluation criteria, and investigate its prognostic role in angiosarcomas.

From 2006 to 2015, 24 Formalin Fixed Paraffin Embedded (FFPE) samples from angiosarcoma patients were retrieved from the Department of Pathology, at the National Cancer Institute “Giovanni Pascale Foundation” of Naples, Italy. All selected cases were primary angiosarcoma. We excluded secondary angiosarcoma originating as consequences of breast radiotherapy.

Medical records for all cases were reviewed for clinical information. The following clinical and pathological parameters were evaluated for each tumor included in the study: patient age at initial diagnosis, tumour size, histologic features, tumour differentiation, type of surgery (for tumour removal) and clinical outcome.

In addition to H&E evaluation, all specimens were characterized for all routinely diagnostic immunophenotypic parameters.

Antigen expression was evaluated independently by two pathologists (ADC and MDB) using a light microscopy. For each sample, at least five fields (inside the tumor and in the peripheral areas) and >500 cells were analysed. Using a semi-quantitative scoring system microscopically and referring to each antigen scoring method in other studies, each observer evaluated the intensity, extent and subcellular distribution.

For TIL detection, lymphocytes were quantified by manual expression scoring, considering as tumor infiltrating (TIL) if they were located within 1 high-power field (HPF; ×40) of carcinoma cells. An immunohistochemistry characterization of immune cells was performed by CD3 (for T-cells), CD20 (for B-cells) and CD163 (for macrophages).

The association between PD-L1 expression with clinical-pathological parameters was conducted using Fisher's Exact test determining whether a relationship exists between the different variables included in the study. The level of significance was defined as P<0.05. Overall survival (OS) and disease-free survival (DFS) curves were calculated using the Kaplan-Meier method. All the statistical analyses were carried out using the Statistical Package for Social Science v. 20 software (SPSS Inc., Chicago, IL, USA).

In our cohort, we have included 24 primary angiosarcoma samples from different body locations.

PD-L1 was detected in 16/24 (66%) of angiorsarcoma samples, with a heterogeneous expression of PD-L1 on tumor cells.

The incomplete (Figure 1a, 1b) and complete (Figure 1c, 1d) immunoreactivity of membrane was equally distributed in our case series, with a prevalent mild intensity of reaction, and with or without cytoplasmic positivity (Figure 1e, 1f) associated with a membrane staining.

In most of the analyzed samples the presence of infiltrating lymphocyte (TIL) was poor, only in 3/20 (15%) it was consistent. TIL component showed a PD-L1 positive staining also in negative tumor samples (Figure 2a, 2b).

Regarding the relation with patients survival, we showed only a weak trend of statistical association with DFS (0.118) (metastatic patients have a prevalent expression of PD-L1), while no statistically significance was detected with Overall survival (p-value= 0.726).

Kaplan-Meier curves relative to DFS and OS are illustrated in Figure 3. 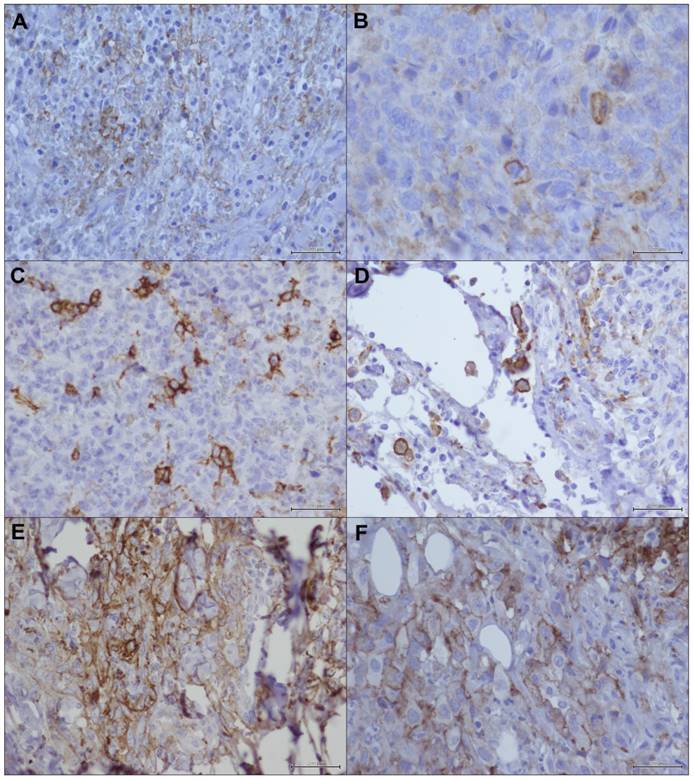 Primary Angiosarcoma had a very poor prognosis with a high rate of metastasis involving most commonly lungs, liver, regional lymph nodes and bone.

Angiosarcoma is a tumor with a very poor prognosis, also because of known molecular alterations and consequently of specific therapeutic targets. Therefore, it is treated mainly with surgery followed by chemotherapy and/or radiation therapy.

In this study we assessed the immunohistochemical expression of PD-L1 mainly to clarify the potential role in the progression of angiosarcoma, but also to define a correct IHC staining.

A case series of 24 angiosarcomas from different body localization were enrolled into this study. Our results showed a heterogeneous expression of PD-L1 on tumor cells.

For its assessment and evaluation, not yet described in the literature, we defined both qualitative, considering the immunoreactivity of membrane and the intensity of the reaction at the membrane level, and quantitative parameters, considering the percentage of positive tumor cells ≥ 5%.

PD-L1 was detected in about 66% of angiosarcoma samples with a prevalent immunoreactivity of membrane. Only in few cases a mild cytoplasmic associated with membrane staining was present.

The data available in the literature related to the expression of PD-L1 are not uniform, because of the different antibodies clones used, with variable specificity, often doubtful topographical localization and not well defined score. Moreover, in the most of studies in which PD-L1 expression was realized by immunohistochemistry, a consistent cytoplasmic expression was detected, without clarify and define the real value of this positivity in tumor cells [24].

Whereas for other malignancies the prognostic value of PD-L1 is abundantly described in the literature, also for the therapeutic framing of the patients, for the soft tissue tumors this role has not been yet well defined. In a single study PD-L1 IHC expression was described in several histological subtypes of sarcomas [25]. However, the limitation of this study was that PD-L1 expression was analyzed on 20 different histological types, with a few number of specimens for each tumor types without defining its prognostic value. In this study D'Angelo SP et al. described the PDL-1 expression in the all three angiosarcoma cases and also in TIL inside tumors [25].

Actually the prognostic value of PD-L1 in solid tumors is much debated and often conflicting data were described in the literature.

Although most of the findings associated PD-L1 expression with a poor prognosis [26, 27], several studies assigned an opposite value to its expression.

However, also tumours where PD-L1 does not appear to be a prognostic marker [28], the use of the anti-PD1/PD-L1 drugs produces significant therapeutic effects [29]. In fact the only expression of the PD-L1 protein on tumor cells has been thought to be a good predictor of a patient's response.

In conclusion, in clinical practice, the most important purpose is to predict the treatment response from PD-1/PD-L1 blockade, by a correct standardization of operative protocols for the PD-L1 determination in tumor cells.

In our study, the absence of strong correlations between PD-L1 expression and survival of angiosarcoma patients could in part due to the small number of specimens, but also to the extreme aggressiveness of this tumor for which the prognosis is poor in the most of cases.

In angiosarcomas, despite PD-L1 is not related to the prognosis, its detection could be very useful in the therapeutic stratification of patients to enroll for specific therapies associated to PD-1/PD-L1 blockade.

The authors thank all of the study participants for their great effort.

All relevant data of the study were already included in the manuscript, including the survival curves although not significant.

This study was approved by the Ethics Committee of INT Fondazione Pascale.

Written informed consent was obtained from the patient for publication of this manuscript and any accompanying images. A copy of the written consent is available for review by the Editor-in-Chief of this journal.