Background: Protein kinase C zeta/lambda (PKCζ/λ) is a family of protein kinase enzymes that contributes to cell proliferation and regulation, which are important for cancer development. PKCζ/λ has been shown to be an important regulator of tumorigenesis in intestinal cancer. The phosphorylated form of PKCζ/λ, p-PKCζ/λ, is suggested as an active form of PKCζ/λ. However, p-PKCζ/λ expression and its clinicopathologic implication in colorectal adenocarcinoma (CRAC) are unclear.

Methods: Seven whole-tissue sections of malignant polyps containing both non-neoplastic and neoplastic mucosa, 11 adenomas with low-grade dysplasia, and 173 CRACs were examined by immunohistochemistry and western blot assay for p-PKCζ/λ protein expression. The association of p-PKCζ/λ expression with clinicopathologic factors including patient survival was studied.

Conclusions: P-PKCζ/λ overexpression is implicated in tumorigenesis but down-regulation was a poor prognostic factor in CRAC.

Protein kinase C (PKC) is a family of isoenzymes and comprises a complex of serine/threonine kinases, which are involved in signal transduction cascades. The PKC family is grouped into classical (α, β, γ), novel (δ, ε, η, θ), and atypical (ζ, λ, ι, μ) based on their structures and activation chracteristics [1]. The last atypical PKC (aPKC) isoforms are independent of calcium (Ca2+) and diacylglycerol (DAG) compared to other PKCs, which require Ca2+ or DAG for activation [2, 3]. The aPKCs play a major role in the regulation of cell proliferation, apoptosis, survival, and cell polarity for the control of intracellular signaling [4, 5].

Protein kinase C zeta/lambda (PKCζ/λ) belongs to the aPKC isoenzymes and is necessary for mitogenic signal transduction in a variety of cell types [6, 7]. Recently, PKCζ/λ gained an attention for tumorigenesis and stemness in intestinal cancer [8, 9]. PKCζ/λ exhibited an up-regulation in several cancers, including gastrointestinal tract cancers related with motility and invasiveness [10-13]. PKCζ/λ was overexpressed in colon cell lines and showed clinicopathologic significance in colorectal adenocarcinoma (CRAC) [8, 14-16]. CRAC is the most common gastrointestinal cancer and a leading cause of cancer mortality in both men and women [17]. The survival rate for CRAC has increased substantially due to early cancer detection [18]. However, the development of recurrence or metastases occurs even after successful surgical treatment, and the 5-year survival rate is approximately 10% for patients with distant metastasis [18]. Identification of prognostic and therapeutic targets for CRAC is still required, and the PKCζ/λ has the potential to be a novel target for CRAC with clinical implications.

Because PKC is a family of protein kinase enzymes, PKCs participate in controlling the function of target proteins through phosphorylation of hydroxyl groups of serine/threonine amino acid [2]. PKC, itself, is also phosphorylated by enzymes and that is essential for the intracellular signaling requirement for activation of catalytic activity and translocation [19-21]. Thus far, little was known about phoshorylated-PKCζ/λ (p-PKCζ/λ) expression pattern and function in CRAC. To evaluate the role of p-PKCζ/λ in CRAC, p-PKCζ/λ and PKCζ protein expressions were measured. This study assessed p-PKCζ/λ and PKCζ detections in non-neoplastic colonic epithelia, adenoma, and CRAC to evaluate differential expression during tumorigenesis. The p-PKCζ/λ and PKCζ expressions were analyzed to find the relationship of clinicopathologic features including patient survival in CRAC.

A total of 173 patients underwent curative surgical treatment and were histologically diagnosed with CRAC. Information of the patients and survival were collected from medical records. None of the patients had received pre-operative chemotherapy or radiotherapy. CRAC stages were determined according to the American Joint Committee on Cancer Staging System, seventh edition [22]. All cases were clinicopathologically reviewed by two pathologists (MKY and KHK).

The 173 paraffin-embedded colorectal samples of patients were obtained from Chungnam national university hospital, Daejeon, South Korea, between 2002 and 2015. Two most representative and viable neoplastic and non-neolastic tissue areas were selected and marked on the hematoxylin and eosin-stained slides. To create a tissue microarray, tissue columns (3.0 mm in diameter) were punched from the original paraffin blocks and inserted into new recipient paraffin blocks (each containing 30 holes for tissue columns). Seven whole tissue samples of malignant polyp containing the sequence non-neoplastic colorectal tissue-adenoma-CRAC and 11 colorectal adenoma with low-grade dysplasia samples were evaluated. All specimens were provided by national biobank of Korea, Chungnam national university hospital, a member of the Korea biobank network. This study was approved by the Institutional Review Board of Chungnam national university hospital (CNUH 2016-04-038).

Tissue sections on microslides were deparaffinized with xylene and hydrated in graded alcohol series. The sections were heated in a pressure cooker containing 10 mmol/L sodium citrate (pH 6.0) for 3 min at full power for antigen retrieval. Endogenous peroxidase activity blocking was performed using 0.03% hydrogen peroxide containing sodium azide for 5 min. The sections were incubated at room temperature for 1 hour with the rabbit monoclonal anti-p-PKCζ/λ (phosphorylated at T410 for PKCζ and phosphorylated at T412 for PKCλ) antibody (1:200, ab76129, Abcam, Cambridge, United Kingdom) and with the rabbit polyclonal anti-PKCζ antibody (C-20) (1:300, sc-216, Santa Cruz Biotechnology, Santa Cruz, CA, US). After washing, the samples were incubated in labelled polymer-HRP anti-mouse (Dako EnVision+system-HRP (DAB), Dako, Carpinteria, California, USA) for an additional 20 min at room temperature followed by additional washing. After rinsing, chromogen was developed for 2 min. The slides were then counterstained with Meyer's hematoxylin, dehydrated, and coverslipped. The primary antibody was omitted in the negative controls.

Immunohistochemical staining was scored using digitally scanned files by a scanscope program (Aperio ScanScope CS system, Vista, CA, USA) and using a light microscope. The Allred et al. method was used to evaluate both intensity of immunohistochemical staining and proportion of stained tumor cells or non-neoplastic mucosal epithelial cells in each stained slide. The proportion score (range: 0-5) and intensity score (range: 0-3) were added to obtain the total score (range: 0-8) [23]. Ten low power fields (×100 magnification) were examined and scored for mean value. The total score was graded as low (total score; less than that of non-neoplastic epithelia) or high (total score; greater than that of non-neoplastic epithelia). Each sample was examined separately and scored by two pathologists (MKY and KHK). Discrepancies in scores were discussed to obtain a consensus.

Differential immunohistochemical expression of p-PKCζ/λ and PKCζ in non-neoplastic, adenoma, and CRAC

A total of 173 CRAC samples with clinicopathologic features were investigated. Patients' age ranged from 25 to 89 years, with a mean of 61.9 years. CRACs were located in the ascending colon (n=29), transverse colon (n=9), descending colon (n=7), sigmoid colon (n=55), and rectum (n=73). P-PKCζ/λ and PKCζ expression of CRACs was positively correlated with each other (p=0.000). P-PKCζ/λ expression was negatively correlated with pathologic stage (I-II vs. III-IV), poorly differentiated CRAC (including the mucinous type), radiation therapy, and chemotherapy (p=0.039, p=0.002, p=0.002, and p=0.009, respectively). PKCζ expression was negatively correlated with poorly differentiated CRAC (including the mucinous type) and radiation therapy (p=0.004 and p=0.002, respectively) (Table 1). 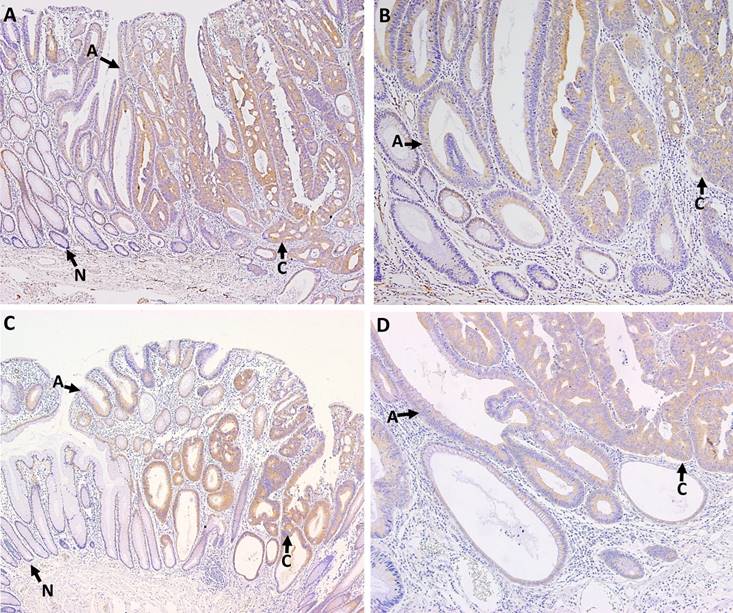 P-PKCζ/λ western blot assay showed that CRAC expressed a significantly higher level of p-PKCζ/λ than did the non-neoplastic epithelia (p=0.001) (Fig. 3). P-PKCζ/λ western blot expression was negatively correlated with poorly differentiated CRAC (including the mucinous type) (p=0.012) and showed a tendency of negative correlation with chemotherapy (p=0.054) (Supplementary Table 1). Both overall survival and disease-free survival analyses were performed on data from 40 patients with CRAC. Kaplan-Meier overall and disease-free survival curves of p-PKCζ/λ-low expression showed a tendency of shortened survival times but did not attain statistical significance (p=0.514 and p=0.120, respectively) (Supplementary Fig.1). The multivariate analysis using the Cox's proportional hazard model was performed on age, sex, stage (I-II vs. III-IV), and p- PKCζ/λ expression and it did not attain statistical significance for overall and disease-free survival (p=0.819 and p=0.193, respectively) (Supplementary Table 2).

The PKC family has been investigated in cancers since it was first found to be activated by phorbol-esters, which promote carcinogen-induced tumorigenesis [3]. PKCζ/λ, an atypical subtype of the PKC family, has been shown to have an important regulatory effect on tumorigenesis [9, 24]. Interestingly, PKCζ/λ expression exhibits both tumor suppressive and tumor promoting functions in cancers [25, 26]. The role of p-PKCζ/λ, an active form of PKCζ/λ, in cancers has yet to be determined. The present study is the first to validate p-PKCζ/λ expression in the CRAC. To assess p-PKCζ/λ expression, both immunohistochemistry and western blot assay were performed in the CRACs. CRACs and adenomas showed more up-regulation of p-PKCζ/λ and PKCζ in immunostaining than did the non-neoplastic epithelia. Western blot assay for P-PKCζ/λ detected a higher level of p-PKCζ/λ in CRAC than in non-neoplastic epithelia. CRACs exhibited significantly up-regulated p-PKCζ/λ and PKCζ detections than did the adenomas. From these results, p-PKCζ/λ and PKCζ aberrant protein expression might be involved in colonic tumorigenesis and carcinogenesis.

Evidence from previous studies indicated that PKCζ was as a key regulator of critical intracellular signaling pathways and activated Wnt-induced glycogen synthase kinase-3, which increases gene transcription in colon cancer cell lines [15, 21, 27]. However, PKCζ protein expression patterns showed conflicting results wherein up- or down-regulation was shown in CRACs [15, 25]. PKCλ expression was up-regulated in CRAC compared with the non-neoplastic epithelia [9, 16]. PKCζ/λ protein expression was increased in the carcinogen-induced colonic mucosa [28]. P-PKCζ/λ was detected in the non-small cell lung cancer cell line, but little is known about its relationship with cancers [29].

The clinical implications of p-PKCζ/λ and PKCζ protein expression were evaluated in this study. P-PKCζ/λ immunostaining expression was inversely correlated with pathological stage and poor differentiation, and PKCζ expression was inversely correlated with poor differentiation. Considering multivariate and univariate survival analyses, p-PKCζ/λ protein expression demonstrated a prognostic impact on CRAC. Studies on the relationship between PKCζ/λ expressions and its clinical significances in cancers have been undertaken. Low immunohistochemical expression of PKCζ showed shortened disease-free survival in CRAC [8, 14]. The prognostic significance of PKCζ was different depending on the type of cancers; Low expression of PKCζ was related to unfavorable clinicopathologic parameters in prostate cancer, [30] whereas, high expression of PKCζ was associated with a worse patient survival in breast and renal cancers [31, 32]. High expression of PKCλ was associated with a poor prognosis in stomach and lung cancers [33, 34].

Interestingly, p-PKCζ/λ protein expression was shown to be a better prognostic marker than PKCζ in the patients with CRAC in this study. The mechanisms of PKC activation are known to consist of two events: the release of the pseudosubstrate from the substrate-binding cavity and phosphorylation of the kinase domain [35]. PKCζ is activated by phosphatidylinositols-3,4,5-trisphosphate (PIP3) and 3'-PI-dependent protein kinase 1 (PDK1) [21]. PDK1 interacts with PKCζ and phosphorylates the kinase domain at threonine-410 and then interacts with PIP3 to create stable activation. Sequential increase in PKCζ and p-PKCζ expressions was observed in normal, dysplastic, and malignant squamous cell carcinoma of the head and neck (SCCHN) tissues and p-PKC was suggested to be a measurement of activity in SCCHN [36].

In conclusion, the up-regulation of cytoplasmic p-PKCζ/λ and PKCζ protein expression in CRAC occurs at the time of malignant transformation; however, the down-regulation of cytoplasmic p-PKCζ/λ and PKCζ expression in CRAC is associated with worse clinicopatholgic features in CRAC. Especially, down-regulated p-PKCζ/λ has a prognostic impact on patient survival in CRAC. The roles of p-PKCζ/λ and PKCζ are variable depending on the cell types and their clinical implications are still unclear. Further investigation of the underlying mechanism of p-PKCζ/λ activation and the related signal pathway in CRAC are necessary.

This work was supported by the Basic Science Research Program through the National Research Foundation of Korea (NRF) funded by the Ministry of Education, Science, and Technology (NRF-2016R1D1A1B01014311) and the Korean Health Technology R&D Project, Ministry of Health & Welfare (HI15C0789).