Dietary fiber is linked to a reduced risk of colorectal cancer (CRC), and this protective activity is likely due to its fermentation product, butyrate. Dependent upon the hyperactivation of Wnt signaling, butyrate represses CRC cell growth and induces apoptosis. However, resistance to butyrate activity may allow for CRC development even in the context of relatively high fiber intake. We have previously determined that CRC cells resistant to butyrate are deficient in p300 expression. The histone acetylase p300 influences colonic cell signaling and physiology through effects on Wnt signaling. In this short research communication, we report that p300 knockout CRC cells exhibit butyrate resistance, and the re-introduction of p300 expression in p300 knockout CRC cells restores butyrate sensitivity. Microarray data on gene expression associated with butyrate sensitivity are presented and discussed.

Dietary fiber intake is linked to a reduced risk of colorectal cancer (CRC) [1], and this protective effect is likely mediated by the fermentation product of fiber in the colon, butyrate [2 and refs. therein]. Butyrate is a short-chain fatty acid and histone deacetylase inhibitor (HDACi). The agent induces apoptosis and represses clonal growth of CRC cells, dependent upon its ability to hyperactivate Wnt signaling [3]. However, resistance to the chemopreventive action of butyrate derived from a high-fiber diet may contribute to CRC [1]. To understand the mechanisms of resistance, we have derived a butyrate resistant cell line (HCT-R) from butyrate-sensitive HCT-116 CRC cells. HCT-R cells are not only resistant to physiological levels of butyrate, but also exhibit cross-resistance to clinically relevant HDACis [3, 4].

The hyperactivation of Wnt signaling by butyrate is influenced by CREB binding protein (CBP) and p300, histone acetylases that associate with beta-catenin, a major component of Wnt signaling transcriptional complexes [8]. Modulation of CBP- or p300-mediated Wnt signaling affects the ability of butyrate to induce Wnt activity and apoptosis [5-7]. Since we have observed that HCT-R cells are deficient in p300 expression, we hypothesized that one mechanism by which HCT-R cells develop resistance to butyrate is through downregulation of p300 expression.

Crystal violet was from Fisher. Butyrate was obtained from Sigma, dissolved in purified water, filter sterilized, and used at 5 mM concentration.

100 cells/well were plated in 6 well dishes, mock or butyrate (5 mM) treated for 24 hr, and then incubated in media without butyrate for 14 days until colonies form. Cell colonies were stained with crystal violent and counted. Percent suppressed clonal growth was calculated.

Western blotting was performed as previously described [3]; band images were adjusted for brightness and contrast to enhance visualization.

Student's T-test was utilized, with statistical significance set at P < 0.05.

We confirmed (Fig. 1A) the lack of p300 expression in the knockout lines D10 and F5 [9] at the protein level; in addition, we ascertained that the cells expressed CBP (Fig. 1A). All cell lines exhibited significant upregulation of Wnt activity by butyrate (Fig. 1B). However, we have previously reported that it is the fold-induction of Wnt activity, and not the final levels of induced Wnt signaling, that determines the effects of butyrate in CRC cells [2-7]. F5 cells exhibited decreased fold-upregulation of Wnt activity compared to HCT-116 cells, and the greater than two-fold difference in Wnt signaling upregulation between these lines was highly significant (P < 0.001) (Fig. 1C). D10 cells exhibited fold-upregulation of Wnt activity that was statistically equivalent to HCT-116 cells (P < 0.001) (Fig. 1C). All cell lines exhibited increased caspase activity upon exposure to butyrate (Fig. 1D). However, induction of apoptosis by butyrate was markedly inhibited in the two knockout lines; the fold-increase was more than two-fold lower in D10 knockout cells compared to wild-type HCT-116 cells (P < 0.005), while the fold-increase in F5 cells was close to two-fold lower (P < 0.02). Whereas all lines exhibited reduced proliferation upon butyrate treatment (Fig. 1E), F5 cells exhibited a significantly greater degree of proliferation when exposed to butyrate compared to HCT-116 cells (P < 0.002). In contrast, HCT-116 and D10 cells exhibited statistically equivalent proliferation with butyrate treatment. A pilot microarray analysis was conducted on the cell lines (Fig. S1); discussion of these data are included in Supplementary Information, Part I.

From the two p300 knockout cell lines, F5 cells exhibited the greater degree of butyrate resistance (Fig. 1). Therefore, to further ascertain the role played by p300 in butyrate resistance, we utilized F5 cells that were rescued through stable transfection with a p300 expression vector [9] (Fig. 2a). 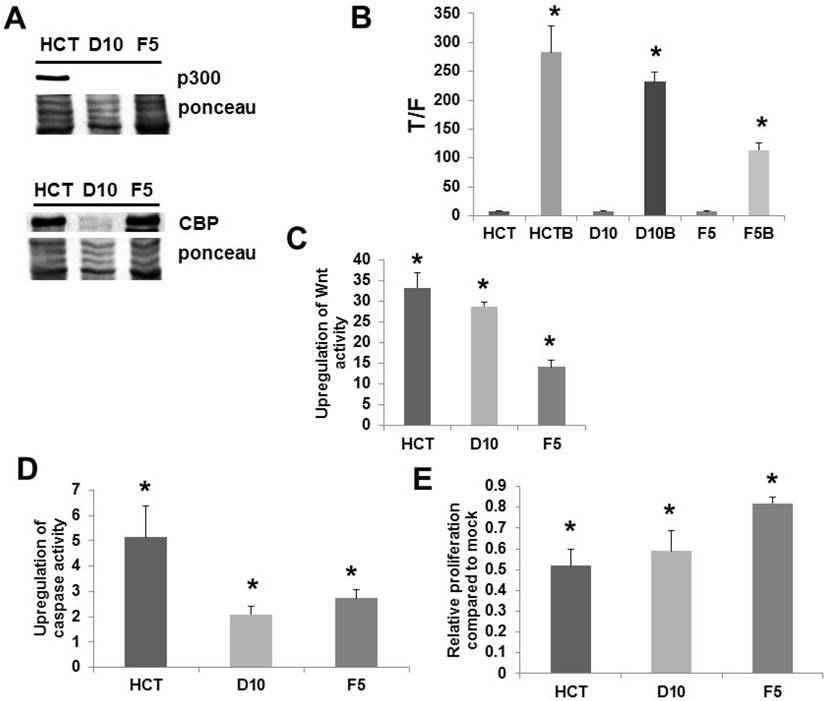 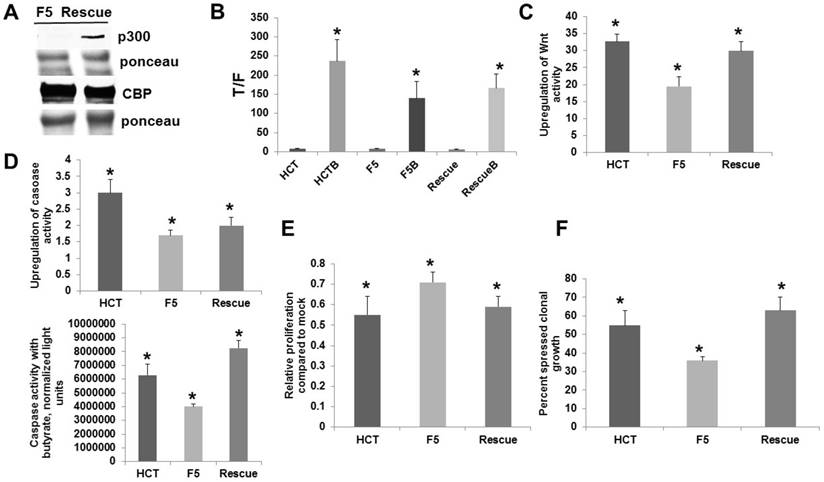 Butyrate resistance may contribute to CRC development, particularly in the proximal colon, where the levels of diet-derived butyrate are at their highest [11]. Furthermore, microsatellite instability (MSI) is more common in right-sided colon tumors, and MSI CRCs have a higher frequency of p300 mutation [12]; whereas, 5.4% of CRC patients have alterations in EP300 (p300) [13]. A fraction of CRCs also express p300 at relatively low levels [14], suggesting that epigenetic suppression of promoter activity [15] and/or loss of heterozygosity may contribute to downregulation of p300. Loss of heterozygosity across the EP300 locus has been reported for 38% of primary colon tumors [15].

In Supplementary Information (Part II), we discuss how these findings fit into our work on butyrate and Wnt signaling. Understanding the role of p300 in butyrate resistance may lead to better preventive and/or therapeutic approaches against CRC.

This work was supported by funding from Geisinger Commonwealth School of Medicine.