Methods. The EOC patients treated with NAC at Peking Union Medical College Hospital by a single gynecological oncology team were enrolled for the retrospective study. The CA125-related variables were categorized into four groups: normalizations, nadirs, half-life and percentage reductions. Associations of these variables with progress-free survival (PFS) and overall survival (OS) were evaluated.

Conclusions. Our study suggests that the CA125 nadir value is the most reliable prognostic factor to predict PFS and OS in advanced EOC patients treated with NAC. This information is important in patient counseling and creating individualized follow-up plans.

Epithelial ovarian carcinoma (EOC) is the most lethal genital tract tumor, with more than 150,000 deaths worldwide [1]. In China, approximately 52.1 new patients per 100,000 individuals were diagnosed with ovarian cancer in 2015, with 22.5 annual deaths per 100,000 beings' due to this malignancy alone [2]. Patients with advanced EOC have extremely poor prognoses, with 50%-95% of patients relapsing and 65% of patients dying in the following 5 years [3, 4]. Most patients relapse within the first 2 years after treatment; therefore, follow-up is quite important in detecting the recurrent disease in the early stages.

Serum CA125 detection is considered the standard method of monitoring therapeutic effects and disease recurrence. Previous studies have demonstrated several methods of using the predictive value of CA125 levels after patients received surgery, e.g., normalizations [5, 6], nadirs [7, 8], half-life [8-10] and percentage reductions [11]. While most of these studies were carried out in patients treated with primary debulking surgery (PDS), followed by six to eight cycles of chemotherapy, limited data was published to discuss whether the cutoff was applicable to the patients underwent neoadjuvant chemotherapy (NAC), followed by interval debulking surgery (IDS).

In recent years, two prospective randomized controlled clinical trials have compared NAC-IDS with PDS for the treatment of advanced epithelial ovarian carcinoma [12, 13]. These reports have demonstrated the equal oncologic outcomes between the two groups, but with lower postoperative morbidity in the NAC-IDS group. Though the results remain controversial, the application of neoadjuvant chemotherapy to advanced EOC patients has increased markedly in the past ten years, according to data from the National Cancer Database in the United States [14]. Because most previous research has focused on EOC patients with PDS, it is important to find and validate a powerful CA125-related indicator for patients with NAC-IDS. Therefore, we carried out this research to find out the most reliable CA125-related factors with which to predict survival and the cutoff for advanced EOC patients treated with NAC-IDS.

From January 1996 to April 2015, the EOC patients of stage III and IV diagnosed according to International Federation of Gynecology and Obstetrics (FIGO) staging system and treated with NAC-IDS at Peking Union Medical College Hospital were identified. To avoid the researcher bias, all selected patient were diagnosed and treated by the same gynecologic oncologist and gynecological oncology team. The consecutive medical records describing initial and serial serum CA125 levels, demographic data and clinicopathological information were collected. Because of the long time interval of our study, patients received two kinds of platinum-based chemotherapy regimens as the previous study described [15]. All patients received at least six cycles of chemotherapy, including both neoadjuvant and adjuvant chemotherapy.

Following the initial eligibility screening, the inclusion criteria were: (1) patients have had neoadjuvant chemotherapy; (2) patient had an elevated CA125 level at the moment of diagnosis as well as before interval debulking surgery (>35U/ml); (3) patients had complete clinicopathological data with serial serum CA125 levels during primary treatment; (4) disease recurrence determination was based on an increasing CA125 level or the appearance of new lesions upon radiological examination and (5) patients with borderline ovarian tumors were excluded from this study.

Variables regarding the characteristics of patients were grouped as following: (1) because the residual disease was recorded as one of four sizes: non-visible, less than 2 cm, more than 2 cm and large mass in early medical records. The patients were divided into two groups, non-visible residual disease (NVRD) and visible residual disease (VRD), as in the previous published study [15]. (2) The continuous variables, e.g., related to CA125 and age, were converted into categorical variables, using the median value as the cutoff. The relative change in serum CA125 was calculated from the date of preoperative serum CA125 measurement to the date after the first, second and third cycles of adjuvant chemotherapy. The CA125 nadir level was defined as the lowest CA125 value when the treatment began. The time to nadir and time to normalization (< 35U/ml) were calculated from the time of the first neoadjuvant chemotherapy cycle to the time on which the CA125 level changed to the nadir or became normal. Half-life was calculated based on the formula Half-life=In2×(t2-t1)/InC1/C2, as reported in earlier studies [8-10]. C1 was the CA125 level before neoadjuvant chemotherapy, and C2 was the first time of CA125 level less than 35U/ml or the lowest antigen level within three months of starting chemotherapy, with t1 and t2 being the corresponding times in days.

Progression-free survival (PFS) was defined as the time of neoadjuvant chemotherapy started until the date of clinically confirmed recurrence or death from any cause. Overall survival (OS) was calculated from the date of neoadjuvant chemotherapy started to the date of death from any cause or the last follow-up date. The Kaplan-Meier method was used to estimate the hazard ratios (HRs) related to PFS and OS. A multiple-regression analysis according to the Cox proportional hazard model was used to identify the relative importance of variables as factors for predicting PFS and OS. All statistical analysis was two-sided and statistical significance was considered when P < 0.05. Analyses of all the data was performed using SPSS V. 20.0 software (IBM Inc., Chicago, IL).

Characteristics of the study population

Following the initial eligibility screening, 118 patients with advanced EOC treated with NAC-IDS were identified. Among them, 13 patients had CA125 <35U/ml before surgery and 4 patients with incomplete data of serum CA125 after surgery were excluded. Therefore, 101 patients were available for the data analysis. The characteristics of the patient for the final analysis are presented in Table 1. The median age was 55 years with a range of 36-76 years-old. Eighty-eight patients (87.1%) had FIGO stage III disease and 85 patients (84.2%) had serous tumor histology upon their initial diagnoses. The results regarding residual disease after IDS were non-visible residual disease in 30 patients (29.7%) and visible residual disease in 71 patients (71.3%). Ninety-eight patients (97.0%) received between one and three cycles of NAC, and only 3 (3.0%) patients received more than four cycles of neoadjuvent chemotherapy. The total cycles of chemotherapy applied were six to eight cycles in 70 patients (69.3%) and more than eight cycles in 31 patients (30.7%).

The median follow-up for the 101 patients was 34 months with a range of 6-111 months. During the follow-up, relapses were recorded in 81 patients (80.2%). There were 51 patients (50.5%) died of the disease. The Kaplan-Meier curve and log-rank test for PFS and OS with regard to age, stage, histology, cytoreduction level and total chemotherapy cycles were shown in Table 2. In the univariate analysis, cytoreduction to non-visible residual disease was significantly correlated with the risk of tumor relapse (P=0.033), and also the risk of OS (P=0.039).

Demographic and clinical characteristics of 101 patients

We performed survival analyses for ten CA125-related variables: CA125 level after the (1) first, (2) second and (3) third adjuvant chemotherapy cycles postoperatively; the relative percentage reduction from the preoperative measurement to the measurement after the (4) first, (5) second and (6) third postoperative chemotherapy cycles; (7) nadir level; (8) time to normalization; (9) time to nadir and (10) half-life. The cutoff used to divide these parameters into two groups was described in the Method section.

In our presented study, the power of various CA125-related variables of predicting the survival of advanced EOC patients treated with NAC-IDS was evaluated. Our data suggested that CA125 nadir after interval debulking surgery is the most significant prognostic factor for predicting tumor recurrence and OS. And for all we know, this is the first study to evaluate the various parameters associated with CA125 serum level in advanced EOC patients received NAC-IDS and treated by a single gynecological oncologist. 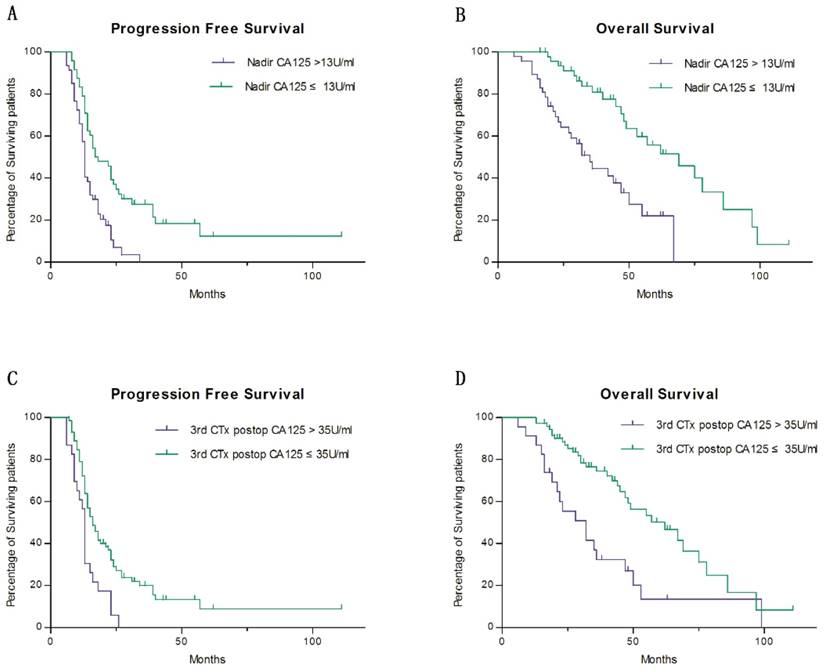 The post-surgery levels and changes in serum CA125 have been extensively investigated for epithelial ovarian cancer response monitoring. CA125 normalization is the most studied target in predicting survival of advanced ovarian cancer [5, 6, 16-18]. The vast majority of research reported that the normalization of CA125 values after the third adjuvant chemotherapy cycle was the best variable to predict survival [6, 16-18]. Another response value regarding CA125 levels is the nadir. The nadir is reported using various cut-offs, and various time points are used for nadir determination [7, 8, 19-20]. CA125-related time-to-event variables included the time to CA125 normalization and the time to nadir, both of which have been shown to correlate with PFS [20] and OS [21]. Of the kinetic variables regarding CA125, the most reported is CA125 half-life. Several studies have shown a strong correlation between CA125 half-life and the survival [8-10, 22]. However, patients treated with PDS or both PDS and NAC-IDS were enrolled in those studies. The cut-offs and conclusion may not apply to patients with NAC. Therefore, we carried out this research to figure out the most powerful and reliable CA125-related prognostic predictor using the reported calculation method and to find a cut-off value that might apply to patients with NAC.

In our cohort, we found that the nadir of CA125 was the most powerful predictor of survival among the evaluated CA125-related measures. Crawford et al. observed that among 79 EOC patients with FIGO stage IC-IV disease and underwent PDS following chemotherapy, CA125 nadir after PDS was predictive of PFS and OS with a cut-off value at 10U/ml [19]. Prat et al. examined 96 EOC patients with FIGO stage III-IV disease treated with PDS or IDS followed by chemotherapy and drew the same conclusion. Patients whose CA125 nadir values less than 10U/ml had significantly higher rates of PFS and OS than those of patients whose CA125 nadir values more than 10U/ml [7]. Unlike previous studies, our study focused on the stage IIIC-IV patients with NAC operand treated by a single surgeon, since this advanced stage of patients accounted for 70% of all ovarian cancer cases. Patients with CA125 nadir values ≤ 13 U/ml have a better prognosis, with less recurrence and longer OS. This finding reminds gynaecological oncologist that patients whose CA125 values arrived at normal but were more than 13 U/ml at the end of chemotherapy should be followed up more closely and more frequently than others. Also, we should consider whether patients should be given maintenance therapy when nadir CA125 is higher than 13 U/ml, and significant progress have been made in using PARP inhibitors as a maintenance therapy for EOC patients [23]. However, the retrospective nature of our study limits the conclusions, and a prospective study designed to validate the various reported CA125-related measures is strongly suggested.

CA125 is not the best prognostic variable, but it remains an important support for gynecological oncologists in managing the diagnoses, treatment and follow-up of EOC patients. Our study suggested that CA125 nadir value was the most significant prognostic factor for predicting progress-free survival and overall survival in advanced EOC patients treated with NAC-IDS. It is important for patient counseling and decision-making for individual follow-up plans.

All procedures performed in our studies involving human participants have been approved by the ethics committee of Peking Union Medical College Hospital and have therefore been performed in accordance with the ethical standards laid down in the 1964 Declaration of Helsinki and its later amendments.

1. WHO. Global health observatory data repository. Number of deaths: world by cause. 2014

14. Melamed A, Hinchcliff EM, Clemmer JT. et al. Trends in the use of neoadjuvant chemotherapy for advanced ovarian cancer in the United States. Gynecol Oncol. 2016;143(2):236-40