Department of Urology, the First Affiliated Hospital of Nanjing Medical University, Nanjing, 210006, China
* These authors contributed equally to this work.

Circular RNA (circRNA) comprises a class of endogenous species of RNA consisting of a circular loop that is crucial for genetic and epigenetic regulation. The significance of circRNA in bladder cancer (BCa) remains to be investigated. Here we performed genome‑wide circRNA analysis of 5 paired tumour and adjacent normal tissue samples from BCa patients via next generation sequencing (NGS) technology. Next we confirmed NGS data in a separate set of 32 paired BCa samples using quantitative real-time reverse transcription polymerase chain reaction. The results showed that circRNA profile presented a total of 88,732 circRNA in BCa samples. Among them, 14 were upregulated and 42 were downregulated with q-values of <0.001 and fold changes of ≥2 or ≤0.5. The expression level changes of hsa_circ_0091017 and hsa_circ_0002024 in the 32 paired samples were in accord with NGS data. In conclusion, we identified a set of circRNAs that are potentially implicated in the tumorigenesis of BCa and could serve as novel diagnostic markers for BCa.

Urothelial bladder cancer (BCa) is the seventh most common cancer among the male population worldwide. Approximately 75% of BCa patients with high recurrence rates present a tumour confined to the mucosa or submucosa, whereas the rest have muscle-invasive BCa with evident aggressive behaviour, which is the main threat to the patients. At present, there is still no effective treatment beyond surgery for bladder cancer. Therefore, understanding the molecular mechanism of BCa development and progression is important to develop novel therapeutic approaches.

Circular RNA (circRNA) was first found in RNA viruses [1]. With the advances in next generation sequencing (NGS) technology and bioinformatics, circRNA was discovered as a novel class of abundant endogenous non-coding RNA with regulatory potency in mammalian cells [2] . Unlike normal linear RNA, the 3′ and 5′ ends of circRNA are covalent bonds that are linked to form closed loop structures without polarity nor polyadenylated tails, thereby making them stable [3]. CircRNA can function as a microRNA sponge to contribute to competing endogenous RNA (ceRNA) networks. CircRNA can also bind and sequester RNA binding proteins (RBPs) to form RNA protein complexes (RPCs) that can regulate the pool of RBPs and influence gene expression [4,5].

The study included five patients with BCa who underwent partial or radical cystectomies at the First Affiliated Hospital of Nanjing Medical University. Patients with a history of cancer and any preoperative chemotherapy or radiotherapy were excluded. After surgery, the matched specimens were immediately preserved in liquid nitrogen until use. All patient samples were confirmed by pathological examination. The pathological diagnosis was in accordance to tumor node-metastasis classification for the stage (2002 International Union Against Cancer) and histopathologic grade (WHO 1973). This study was approved by the Institutional Review Board of the First Affiliated Hospital of Nanjing Medical University, China. Written informed consent was obtained from all the participants in this study.

Total RNA was isolated from samples using TRIzol reagent (Life Technologies, CA, USA) following the protocol. The quantity and quality of total RNA samples were measured using NanoDrop ND-1000 (Thermo Scientific, DE, USA). RNA integrity was assessed via electrophoresis using denaturing agarose gel. The spectrophotometric absorbance of RNA samples at 230, 260 and 280 nm and ratios of D260:D280 and D260:D230 were used estimate the purity of total RNA. RNA samples were stored at -80°C before use.

First we characterised circRNA transcripts via RNA sequencing analysis of ribosomal RNA and linear RNA-depleted total RNA from five matched BCa tissue samples. Each sample was sequenced on Illumina HiSeq and yielded an average of 70 million reads, which were mapped onto the human reference genome (GRCh37/hg19) by TopHat2 [17,18]. A total of 88,732 distinct circRNA candidates were found in all the samples. Among these, 62,788 contained at least two unique back-spliced reads.

We then defined the statistical criteria for selecting aberrant-expressed circRNA using a q-value of <0.001 with a fold change of >2.0 or <0.5. A total of 14 circRNA were upregulated and 42 circRNA were downregulated significantly (Table 1). The differential expression for circRNA between cancerous and non-cancerous samples was shown in the heat-map and dendrogram generated via unsupervised clustering that was blinded to the clinical annotations (Fig. 1). The Scatter plot was used to assess the variation of circRNA expression between BCa and adjacent normal samples (Fig. 2).

The bar diagram showed all detected reads of circRNA back-spliced junction on genome elements (Fig. 3A). Most differentially expressed circRNA originated from the exons (Fig. 3B). The box plot showed that the distribution of circRNAs intensities from all the datasets was almost similar in all samples (Fig. 4). Moreover, a volcano plot was drawn to visualise differentially expressed circRNA with statistical significance (Fig. 5).

For the implication of circRNA in gene regulation [24,25], we performed KEGG pathway enrichment analysis for linear transcripts that matched significantly differentially expressed circRNA. Our results indicated that systemic lupus erythematosus and amphetamine addiction were the top related pathways in upregulated and downregulated linear transcripts, respectively (Fig. 6). 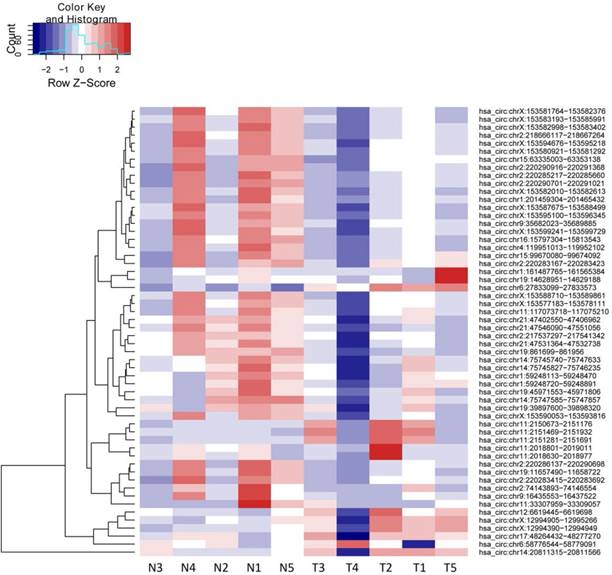 Next we performed GO analyses of the linear counterparts that produced aberrantly expressed circRNA. Our data showed that the linear counterparts of differentially overexpressed circRNA in bladder cancer group favoured platelet alpha granule lumen and platelet activation, compared to non-cancerous group, while the repressed transcripts were more related to actin binding and contractile fibre parts (Fig. 7). These results suggest that these pathways and molecular function-related circRNA may contribute to BCa pathogenesis and development.

To validate the screened circRNA candidates, we designed multiple pairs of divergent primers to amplify the back-spliced junctions of circRNA in T24 and 293T cell lines. The amplified products were further confirmed via Sanger sequencing. Two downregulated circRNA (hsa_circ_0091017 and hsa_circ_0002024) were randomly detected in NGS data set via qRT-PCR in 32 pairs of samples. The levels of hsa_circ_0091017 and hsa_circ_0002024 in cancerous tissues were significantly reduced compared with non-cancerous tissues (Fig. 8).

Scatter-plot of circular RNA averaged normalized value variation between the adjacent normal tissues (x-axis), and BCa tissues (y-axis). The circRNAs above the top red dashed line and below the bottom red dashed line indicate more than 2.0 fold change in circRNAs between the two groups of samples. 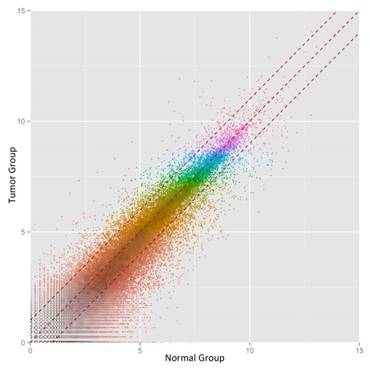 As a new member of the ceRNA network, circRNA has drawn extensive attention recently. circRNA are abundant, conserved, stable and cell type-specific in the regulation of cell function [19]. Recently, the role of circRNA in tumourigenesis has been demosntrated [22,23]. In this study, we detected circRNA in linear and ribosomal RNA-deprived RNA samples from bladder cancer and adjacent normal mucosa using RNA-seq and qPCR technology. The digestion of total RNA using exoribonuclease enzyme RNase R showed overwhelming enrichment for the identified head-to-tail back-spliced junctions compared with linear mRNA, thereby demonstrating the capability of our detection pipeline to recognise legitimate circRNA.

NGS technology has been widely used for mRNA, lncRNA and miRNA. However, the application of NGS in circRNA has only begun. Zheng et al. characterised circHIPK3 in multiple cancers using NGS technology [24]. Ahmed et al. showed altered expression patterns of circRNA in epithelial ovarian carcinoma [9]. However, systematic studies have not yet been conducted on circRNA profiling in human bladder cancer using NGS technology.

CircRNAs such as ciRS-7 and Sry have been reported to modulate miRNA activity [5]. Xie et al. reported that circRNA_001569 could promote the proliferation and invasion of colorectal cancer by targeting miR-145 [25]. Circ-ITCH functions as a cancer suppressor in oesophageal squamous cell carcinoma and colorectal cancer [11,12]. In bladder cancer, Zhong et al. reported the regulatory role of circTCF25-miR-103a-3p/miR-107-CDK6 pathway [26]. However, research on circRNA function is only in the initial phase and requires further exploration in the future. 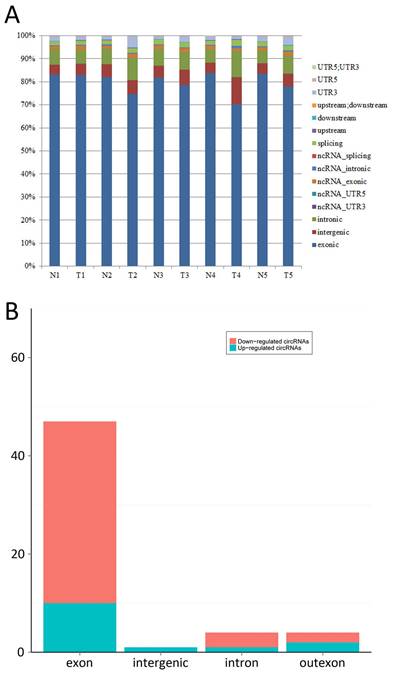 Several studies have reported transcription regulation of circRNA [19,20]. For example, ci-ankrd52, ci-mcm5 and ci-sirt7 enhanced the expression of their parental mRNA [27,28]. GO enrichment analyses were performed to classify biological processes, molecular functions and cellular components from differentially expressed mRNA, which could identify the role of differentially regulated circRNA. Our data showed that upregulated mRNA was most associated with kinase activation in biological processes. In contrast, the downregulated transcripts were relevant to muscle contraction in biological processes and actin binding in molecular function. These data indicate that these upregulated cirRNAs would promote kinase activation and stimulate oncogenic signaling pathways to cause BCa. 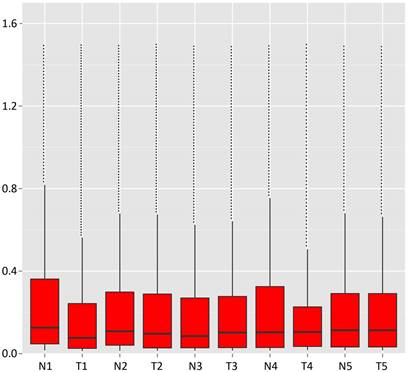 Volcano plots to visualise differential expression between bladder cancer samples and non-cancerous samples, which show the relationship between fold change and statistical significance. The red dots in the plot denote differentially expressed circRNA with a fold change of >2 or <0.5 and a q value of <0.001. 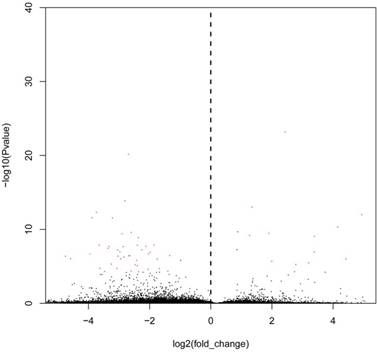 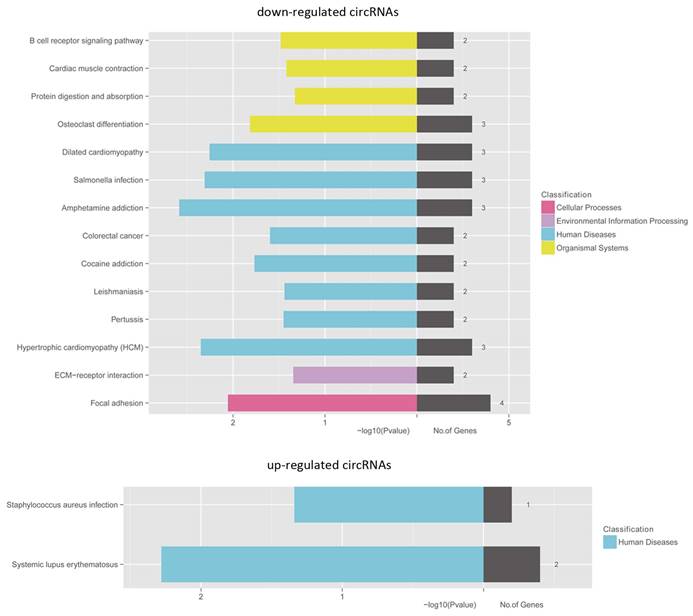 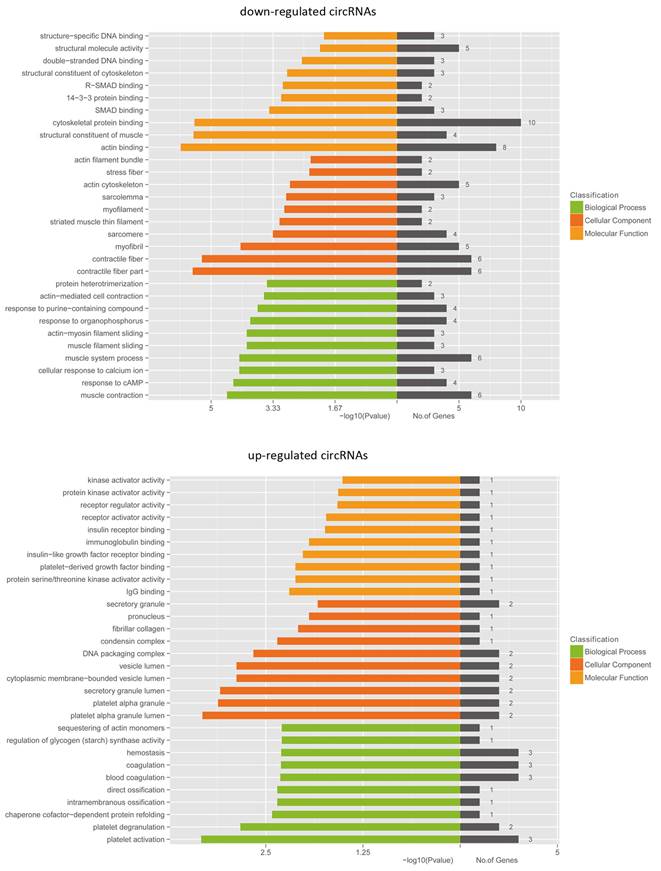 In addition, KEGG pathway enrichment analysis for significantly differentially expressed mRNA indicated that 2 pathways are associated with upregulated mRNA, whereas 14 pathways are related to downregulated mRNA. The top enriched KEGG pathways in cellular processes for downregulated transcripts included ECM-receptor interaction and focal adhesion. It is well known that reduced ECM-receptor interaction and focal adhesion would impair cell adhesion and promote cell migration and invasion, leading to tumorigenesis and metastasis. Therefore, these pathways may contribute significantly to BCa pathogenesis and development.

In conclusion, this is the first report on aberrant circRNA profile of BCa and our results provide new insights into the role of circRNA in the tumorigenesis of BCa.

Relative levels of hsa_circ_0002024 and hsa_circ_0091017 in 32 bladder cancer samples. Each point represents the mean result of triplicate samples.

This work was supported by the National Natural Science Foundation of China (No. 81272832 and 81602235), the Provincial Initiative Program for Excellency Disciplines of Jiangsu Province (No. BE2016791), Jiangsu Province's Key Provincial Talents Program (ZDRCA2016006), the “333” project of Jiangsu Province (LGY2016002) and the Priority Academic Program Development of Jiangsu Higher Education Institutions (PAPD). The funders had no role in study design, data collection and analysis, decision to publish, or preparation of the manuscript.