Gastric cancer is an important health problem, being the fifth most common cancer and the third leading cause of cancer-related death worldwide [1]. More than 950,000 new diagnoses are made every year [2]. In China, although the incidence has decreased over past several decades, gastric cancer still ranks the second most common malignancy with an estimated 679,100 new cases each year[3]. Due to the lack of specific symptoms at the early stage, over 80% of patients with gastric cancer are diagnosed at an advanced and unsuitable stage for surgical resection, which is the major reason for a poor prognosis [3]. Tumor-node-metastasis (TNM) staging system has been widely used to provide reliable prognostic information of gastric cancer, but they still have limited capacity to determine different outcomes for ignoring the heterogeneity of gastric cancer. Considering the increasing level of understanding of the molecular basis of tumor biology, more novel biomarkers are applied in diagnosis, prognosis and treatment [4].

Tetranectin, a homotrimeric C-type lectin originally isolated from plasma, was detected to bind with plasminogen and fibrin [5]. It is thought to play an important role in the regulation of proteolytic processes via binding to plasminogen [5]. Impaired cutaneous wound healing, delayed fracture healing and features of Parkinson disease were found in mice lacking tetranectin [6-8]. In malignancies, preoperative serum tetranectin was supposed to be a significant prognostic marker in advanced ovarian cancer patients [9]. The alteration of tetranectin expression in cancer tissue is also considered as a potential biomarker predicting prognosis in breast [10], bladder [11], oral [12] and ovarian cancer [13]. Nevertheless, the roles of tetranectin in gastric carcinoma remain poorly understood.

The aim of the present study was to investigate the expression of tetranectin in gastric cancer specimens and explore its associations with clinicopathological factors and prognosis. We also evaluated whether integration of intratumoral tetranectin expression could generate a predictive nomogram to refine the risk stratification system for prognosis of patients with gastric cancer.

A total of 328 consecutive gastric cancer patients who received standard gastrectomy with D2 dissection from the same surgical team in Zhongshan Hospital of Fudan University (Shanghai, China) between May 2002 and April 2006 were enrolled in the study. We retrospectively collected the baseline demographic and clinicopathological factors of these patients, including age, gender, tumor location, tumor differentiation, Lauren classification, and tumor stage. Tumor stage and tumor differentiation were reassessed by two independent gastroenterology pathologists according to the 2010 International Union Against Cancer TNM classification system. All patients were followed up until July 2012, with a median follow-up time of 59 months. OS was defined as the time between the dates of surgery and death or last visit. No patients received any preoperative anticancer treatment. All methods were approved by the research medical ethics committee of Fudan University and were carried out in accordance with the approved guidelines. Informed consent on the use of clinical specimens were obtained from all patients.

These data are publically available from the Cancer Genome Atlas and the NCBI Gene Expression Omnibus (accession number: GSE27342 and GSE13911). For the TCGA dataset, all level-3 data were downloaded from the TCGA-STAD portal by using TCGA-Assembler software[14]. The mRNA expression in TCGA dataset was measured by RNA sequencing V2. The RSEM (RNA-Seq by Expectation-Maximization) counts were further normalized by TMM (trimmed mean of M value) method to estimate the relative RNA production levels using edgeR software[15]. For the Gene Expression Omnibus dataset reported previously, the mRNA expression was measured by microarray. The probe set intensities were quantified using the GeneChip Operating Software (GCOS) and normalized with GCRMA (GeneChip Robust Multiarray Averaging) using Array Assist Software.

Tissue microarray on glass slides was deparaffinized in xylene, dehydrated in graded ethanol and subjected to antigen retrieval in boiling citrate buffer (0.01 M, pH 6.0). Then, the sections were blocked by UltraVision Hydrogen Peroxide Block (Thermo Scientific, CA, USA) and UltraVision Protein Block (Thermo Scientific), followed by primary antibody incubation (1:1000; Abcam, USA). UltraVision Quanto Detection System horseradish peroxidase (HRP) Polymer (Thermo Scientific) and DAB Quanto (Thermo Scientific) were applied staining and hematoxylin was used for counterstaining. We also make an H.E staining of the tissue microarray to discriminate tumor part and other part. The staining in gastric cancer cells, not the stromal part of the cancer tissue, were calculated. The staining intensity was categorized as follows: 0, negative; 1, weak; 2, moderate; and 3, strong. Depending on the staining extent, the area was categorized as follows: 0, <5%; 1, 5-25%; 2, 26-50%; 3, 51-75%; and 4, >75%. The staining score was calculated by combining staining intensity and area, yielding a series of results ranging from 0 to 12 according to our previous report [16]. The best cut off point was determined by the ROC analysis.

Analyses were performed with SPSS 19.0 (SPSS Inc., Chicago, IL) and R software version 3.0.2 and the “rms” package (R Foundation for Statistical Computing, Vienna, Austria). Chi-square test was used to compare categorical variables. Cox proportional hazards model was used to perform univariate and multivariate analysis. Kaplan-Meier analysis was used to determine the survival and log-rank test was used to compare the patient survival between subgroups. The area under the receiver operating characteristic curves (AUC) at different cut-off values of OS time was calculated to determine the optimal cut-off value of the tetranectin expression in tumors. Nomogram was created by R software using “rms” package. Calibration plots were generated to examine the performance characteristics of the predictive nomogram. The Harrell's concordance index (C-Index) and Akaike information criterion (AIC) were used to measure the prognostic accuracy. All statistical analyses were two-sided and P < 0.05 was regarded as statistically significant.

The expression of tetranectin in gastric cancer

We first screened differentially expressed members of C-type lectin family in the TCGA-STAD dataset. Results demonstrated that among the various members of CLEC family, the mRNA expression of clec3b in gastric cancer tissues displays the most significant fold-change by comparing with that in normal gastric mucosa (Table 1).Statistical analysis also indicated that the tetranectin expression was remarkably down-regulated in gastric cancer tissues in TCGA (P < 0.001), GSE27342 (P < 0.001) and GSE13911 (P < 0.001) datasets (Fig. 1a-c).

Correlation between tetranectin expression and clinicopathological features in gastric cancer 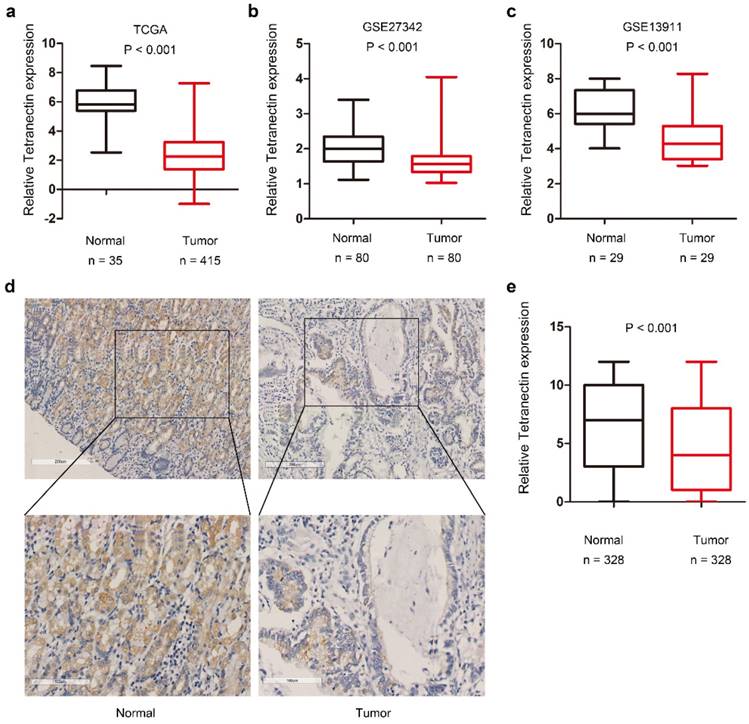 We also conducted a predictive nomogram by combing all independent prognostic factors after multivariate Cox regression analysis (Fig. 3b). In the nomogram, a higher total point predicts a worse prognosis. The total point was calculated by adding the score of Lauren classification, T stage, N stage, M stage and tetranectin expression respectively. The calibration curve for predicted 5-year OS performed well with the ideal mode (Fig. 3c). We next stratified the 328 patients with gastric cancer into 3 groups according to the points calculated by the nomogram: low-risk (< 25th percentile), intermediate-risk (25th-75th percentile), and high-risk (> 75th percentile) groups (Fig. 3d). The results showed that the nomogram could effectively discriminate the risk of OS in patients with gastric cancer.

It is well recognized that gastric cancer is a highly heterogeneous disease with poor clinical outcome. To provide a predictive model for patients with gastric cancer, traditional TNM staging system and the Lauren classification were commonly used in clinical practice [17, 18]. Nevertheless, these predictive models still have a limit in their ability to discriminate a subset of patients when referring to the molecular heterogeneity of gastric cancer [19]. Classification of gastric carcinomas based on molecular subtypes are supposed to be used in the near future to determine prognosis and to customise treatment [1]. Recently, the Asian Cancer Research Group (ACRG) applied gene expression profiling and defined four distinct gastric cancer molecular subtypes that are associated with distinct genomic alterations, survival outcome and recurrence patterns after surgery [20], which shows prognostic value of gastric cancer by using molecular approaches. Moreover, molecular classification based on human epidermal growth factor receptor 2 (HER2; also known as ERBB2) status has been introduced in gastric cancers because of therapeutic implications [21]. In our study, we found a significant association between high tetranectin expression and poor prognosis in gastric cancer patients following surgery, and the molecular mechanism and potential functions of tetranectin in gastric cancer needs further investigation.

Correlation between tetranectin expression and clinicopathological characteristics in patients with gastric cancer. 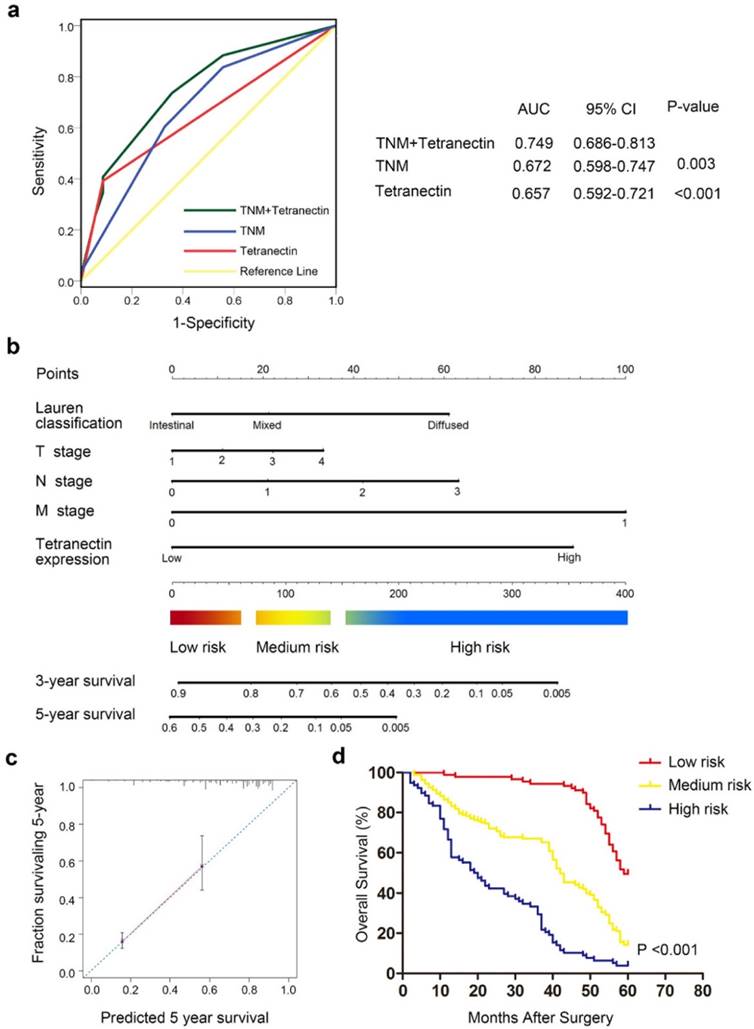 AIC and Harrell's C-index analysis of the comparison of the predictive accuracies of different models.

Tetranectin belongs to the family of C-type lectins that bind specifically to kringle four of plasminogen [22]. C-type lectins are a kind of carbohydrate-binding molecules whose functions span many areas of immunity and homeostasis [23]. Recent studies have suggested the potential correlation between C-type lectins and carcinogenesis including gastric cancer [24]. Our recent research also indicated that C-type lectin receptor CLEC-2 suppressed AKT signaling and invasive activities of gastric cancer cells by blocking expression of PI3K subunits [25]. The expression pattern of tetranectin has also been described in several types of human carcinomas. Serum tetranectin have shown great distinguishing ability between autoimmune pancreatitis and pancreatic cancer [26], as well as benign ovarian lesions and malignant ovarian tumors [27]. However, the role of intratumoral tetranectin expression as a tumor prognostic factor remains controversial. High tetranectin expression were found to be associated with poor survival in breast cancer [10] and bladder cancer [11], while positive expression of tetranectin predicted a favorable survival prognosis in women diagnosed with ovarian cancer [13].

The mechanisms of tetranectin in human malignancies are being explored. It has been reported that tetranectin plays an important role in regulating the fibrinolysis and proteolytic procedures by binding to kringle four of circulating plasminogen to enhance activation of plasminogen into plasmin [28]. Although the precise biological function of tetranectin has not yet been clarified, it shows co-localization with plasminogen at the invasion front of melanomas, suggesting a role in cancer invasion and metastases [29]. Increased diffuse cytoplasmic immunoreactivity of urokinase-type plasminogen activator (u-PA) were also found in neoplastic columnar epithelial cells of colon carcinoma while intense immunoreactivity for tetranectin in the stroma surrounding the tumor cells simultaneously [30]. As u-PA is found up-regulated in gastric cancer cells to enhance invasiveness [31, 32], tetranectin were hypothesized to combine with, or get close proximity to u-PA to enhance tumor associated proteolytic activity [30]. Since proteolytic activity is essential for tumor growth, invasion, and metastasis [33], it is in accordance with our observations that high expression of tetranectin was associated with increased invasiveness and metastasis in gastric cancer. These data imply that tetranectin may play an important role in proteolytic activity to enhance invasion and metastasis of gastric cancer, while the exact mechanisms still needs further investigation.

Although the clinical significance of tetranectin in gastric cancer has been presented in our study, some limitations of this study should be acknowledged. First, the number of patients enrolled in this study was relatively small. Second, our data lack the serum levels of tetranectin. Third, single cohort seems to be inadequate to reach greater reliability. Thus, a large, multi-center, prospective data is needed to validate these results and more efforts need to be exerted in the future studies.

In summary, our data indicated that high intratumoral expression of tetranectin correlated with tumor invasion and metastasis of gastric cancer, and was identified as an independent inferior prognostic factor of OS for patients after gastrectomy. Incorporation of tetranectin expression with TNM staging system or other predictive models might add some prognostic information for patients' survival.

17. Edge SB, Compton CC. The American Joint Committee on Cancer: the 7th Edition of the AJCC Cancer Staging Manual and the Future of TNM. Annals of Surgical Oncology. 2010;17:1471

33. Markus G. The Role of Hemostasis and Fibrinolysis in the Metastatic Spread of Cancer. Seminars in Thrombosis and Hemostasis. 1984