Platinum-based adjuvant chemotherapy improves survival among patients with lung tumors, in particular non-small cell lung cancer (NSCLC). But the predicament of drug resistance in NSCLC patients is frustrating us. The profiles of microRNAs are different between platinum chemotherapy resistant and sensitive NSCLC cells. Researches regarding microRNAs and their targets, in platinum drug resistant cases, illuminate novel ideals for platinum-based chemotherapy for NSCLC patients. Therefore, in this review we will focus on three aspects: Epithelial-mesenchymal transition (EMT), cell proliferation and apoptosis, and the roles of microRNAs in cisplatin (CDDP) and carboplatin (CBP) resistance.

Non-small cell lung cancer (NSCLC), as its name suggests, refers to all types of lung cancers except small cell lung cancer (SCLC). NSCLC encompasses the majority of lung cancers, and is the leading cause of cancer related deaths worldwide1. For NSCLC patients in clinical stage Ⅱ-Ⅲ with completely surgical removal of tumor, adjuvant cisplatin (CDDP, cis-diammine-dichloro-platinum Ⅱ) based chemotherapy is recommended, when driver mutation hasn't been detected1. CDDP, approved by the FDA in 1978, is a traditional cytotoxic chemotherapy drug for types of solid tumors, especially NSCLC2. It forms cisplatin-DNA adducts to destroy functions of DNA leading to the cytotoxicity3. Unfortunately, CDDP resistance constitutes the current therapeutic plateau which needs to be overcome. This drug resistance is classified into two types: primary resistance which refers to chemoresistance before chemotherapy, and acquired resistance which occurs after chemotherapy2. Dysregulations of drug transport and/or metabolism, targeting oncogenes and inhibited drug-induced apoptosis are common mechanisms of drug resistance4. Carboplatin (CBP) is the second generation platinum medicine which is cis-diammine (1, 1-cyclobutanedicarboxylatoplatinum (Ⅱ)), and produces less ototoxicity and nephrotoxicity1. Unfortunately, there is cross resistance between CDDP and CBP. Though CBP is also widely used in NSCLC, the primary and secondary resistance to it still confounds patients and doctors. Oxaliplatin is [(1R, 2R)-cyclohexane-1, 2-diamine] (ethanedioato-O, O′) platinum (Ⅱ), and it's often used to treating colorectal cancer2. Nedaplatin is cis-diamine-glycolate-O, O'-platinum (Ⅱ)2. However, there is little researches regarding these two drugs resistance to NSCLC, therefore we will not discuss these platinum medicines in this article.

MicroRNAs are endogenous small non-coding RNAs, usually 20-22nt. This class of RNA regulates numerous biological processes via negatively regulating RNA expression5. Recently, scientists have demonstrated that microRNAs modulate drug resistance in many such as diffuse large B cell lymphoma and gastric cancer6-7. Prior most researches have also demonstrated the roles of microRNAs in the NSCLC drug resistance. Our team has summarized microRNAs that modulate NSCLC-targeted treatments, and found that different microRNAs could exert opposite influence in certain target medicine clinical pharmacotherapy8. In this review, we discuss the roles of microRNAs in platinum agent resistance and also the possible mechanisms, which provide us a new point of penetration to improve treatments of NSCLC, especially for patients without indications for targeted medicine like EGFR-TKIs (epidermal growth factor receptor-tyrosine kinase inhibitors).

According to the latest clinical guidelines for the treatment of NSCLC, CDDP-based chemotherapy is recommended for the majority of early stage and all advanced NSCLC patients without ALK/EGFR mutation1. Nevertheless the efficacy is impeded by primary resistance, or acquired resistance which usually occurs early. Recent studies have demonstrated that silencing or activating certain miRNAs could reverse drug resistance through different mechanisms.

EMT indicates the phenotypical alterations that occur when epithelial cells lose the epithelial characteristics such as the polarization and cell junctions, and acquire mesenchymal phenotypes9. In recent studies, EMT is found to be closely related with chemoresistance rather than metastasis in solid tumors like lung cancer and pancreatic cancer9-10. Moreover, a study in oral squamous cell carcinoma (OSCC) has revealed that some miRNAs modulate CDDP resistance partially through regulating EMT11. In NSCLC, microspherule protein 1 (MCRS1), specifically negatively regulated by miR-129* (miR-129-1-3p), induces EMT and CDDP resistance, through increasing the expression of miR-15512. Paolo Ceppi et al. found that miR-200c inhibited CDDP and cetuximab resistance, with a significant increase of E-cadherin and a decreased of N-cadherin expression which plays an important role in regulating EMT13.There is evidence that miR-17 family (-17, 20a, 20b), through negatively regulating TGF-beta receptor type-2(TGFbR2), induces EMT and CDDP resistance14.

MiR-15b, directly targeting phosphatidylethanolamine-binding protein 4(PEBP4), can both promote CDDP resistance and EMT15. Raf Kinase Inhibitory Protein (RKIP), targeted by mir-27a can inhibit EMT and CDDP resistance16. MiR-181a, which is remarkably upregulated in the CDDP-resistant A549 cell line than in the parental cell line, promotes EMT by targeting phosphatase and tensin homolog deleted on chromosome 10 (PTEN), but the role of miR-181a in CDDP resistance will not be discussed in this study17. Interestingly, in another study, PTEN, targeted by mir-92b could suppress CDDP-induced apoptosis18. Taken together, EMT may directly contribute to CDDP resistance via PTEN. (MicroRNAs and their targets mentioned before are summarized in Table 1).

In conclusion, EMT is an important factor in the biological behaviors of miRNAs regulating CDDP resistance in NSCLC, and provides a novel future for treatments of CDDP resistant patients. Nevertheless, this hypothesis needs more supporting evidence.

miRNAs involved in CDDP resistance and EMT in NSCLC

Uncontrolled cell proliferation is one of the important classic characteristics of tumors. We want to illuminate whether some miRNAs achieve the resistance or opposite effects through acting on cell cycle. Jian Zhao et al. have found that miR-17 family (-17, 20a, 20b) arrests cell cycle at G1/S phase through inhibition of CDKN1A, and miR-17 family can reverse CDDP resistance19. Additionally, expressions of miR-17 and miR-92 families are related to responses of patients to CDDP treatments without deeper investigations19. MiR-217, inhibiting cell proliferation, reverses CDDP resistance through targeting Kirsten rat sarcoma viral oncogene homolog (KRAS) gene20. MiR-26a, which is down-regulated in CDDP-resistant A549 cell lines, promotes cell sensitivity to CDDP through inhibiting cell growth by targeting the High Mobility Group A 2(HMGA2)-mediated E2F1-Akt pathway21. P53 directly modulates miR-34a, and in turn miR-34a contributes to thep53 network for tumor suppression especially inhibiting tumor cell proliferation22-24. PEBP4, targeted by miR-34a, could promote CDDP resistance, meanwhile PEBP4 can inactivate p5325. In short, it will re-sensitize CDDP-resistant in NSCLC to CDDP when activating the p53/miR-34a loop. Further investigations into the pharmacological mechanisms are still ongoing.

In summary, microRNAs could influence tumor cell proliferation to promote or reverse CDDP resistance. These microRNAs and their targets provide novel insights for treatments and prognostic predictions.

miRNAs involved in CDDP resistance and cell proliferation in NSCLC

/: no mention in the references.

Apoptosis is the progression of cell-programmed death and naturally suppresses tumor progression 28. Though defects in apoptosis of tumor cells contribute to drug resistance, resulting in the failure of anti-cancer therapy, multiple microRNAs have been demonstrated to participate in cell apoptosis29-30. Better understanding of correlations between microRNAs and apoptosis in NSCLC may provide basic principles to improve current therapies.

Decreased miR-184 could confer CDDP resistance via enhancing Bcl-237. Bim is a member of the Bcl-2 family that as the opposite effect of Bcl-2. The intrinsic apoptotic pathway relies on the apoptosome, composed of apoptotic protease activating factor 1 (Apaf-1), cytochrome c and procaspase-930. MiR-155 targeting Apaf-1 and miR-137 targeting caspase-3(CASP3) promote CDDP resistance in lung cancer38-39. Mir-940 and mir-92b could suppress CDDP-induced apoptosis by respectively targeting mitogen-activated protein kinase phosphatase-1 (MKP1) and PTEN18, 40. MiR-138, in addition to the functions in cell cycle discussed before, also could promote CDDP-induced apoptosis by targeting (excision repair cross-complementation group 1) ERCC141.

miRNAs involved in CDDP resistance and apoptosis in NSCLC

/: no mention in the references. 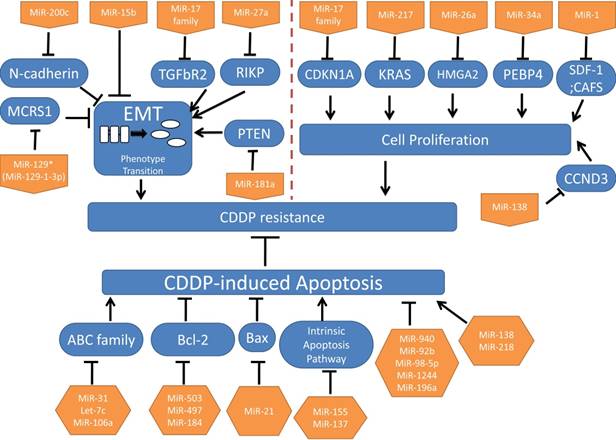 In conclusion, we primarily summarized microRNAs that appear to be important in CDDP resistance from different biological processions: EMT, cell proliferation and apoptosis. (These microRNAs are summarized in Figure 1.)

There are similar anti-tumor mechanisms between CDDP and CBP, which has fewer side-effects to the kidneys and nervoussystem48. There're few researches regarding microRNAs and CBP in lung cancers. Only miR-218 and miR-205 were found to have opposite functions in CBP resistance in NSCLC49. MiR-218 reverses CBP resistance by stimulating apoptosis and cell cycle arrest, while miR-205 promotes cell proliferation to achieve the inverse effects49.

In ovarian cancer, miR-21, miR-214, miR-193b, miR-200c and miR-141 were related with platinum resistance50-52. MiR-21 and miR-214 were over-expressed in the ascites cells which were resistant to CBP therapy compared to omental metastases50, while miR-21 was found to be inhibited by carboplatin and increase the cell invasion. Further studies on miR-193b, miR-200c and miR-141 show these miRNAs conferred resistance to CBP in ovarian cell lines51-52.

Although little attention was paid to the roles of miRNAs in CBP resistant NSCLC (from Figure 2) they may be important in predicating CBP sensitivity and acting as a novel targeting mechanism for reversing resistance.

Lung cancer is usually recognized late and is prevalent in cancer related death. NSCLC contributes for the most of lung cancer, and the majority of NSCLC patients are recommended CDDP-based chemotherapy, but CDDP resistance occurs sooner than anticipated. Therefore, we aim to find a new method to reverse CDDP and/or CBP resistance to assist NSCLC patients. 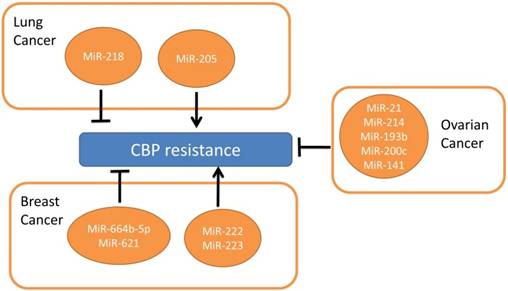