Methods: Relevant literature was retrieved from Pubmed, Web of science and Cocohrane until May 30, 2016. Meta-analysis was performed using hazard ratios (HRs), odds ratio (OR) and 95 % confidence intervals (CI) as effect measures.

Breast cancer is the most commonly diagnosed cancer in women and the second leading cause of cancer-related mortality among women worldwide [1, 2]. Despite recent progress in breast cancer diagnosis and therapy, the prognosis of breast cancer patients is still poor. Local tumor microenvironment, including tumor cells, extracellular substrates, cytokines and tumor-infiltrating immune cells play an essential role in tumor formation, growth, invasion, and metastasis [3-5]. Regulatory T cells (Tregs) are a subgroup of CD4 + T helper cells that suppress T cell immunity. Forkhead box protein P3 (FoxP3) is a transcription factor imperative and sufficient for the induction of immunosuppressive function of Tregs and could be the most specific marker for Tregs in tumors [6].

Due to the ability to inhibit anti-tumor immunity, high level of tumor-infiltrating Foxp3+ Tregs is expected to be associated with poor prognosis. However, recent studies have challenged this idea and shown that Foxp3+Tregs could improve survival in some tumors [7-9]. To resolve the contradiction, in this study we performed a meta-analysis to investigate the correlation of Foxp3+Tregs and the survival of breast cancer patients.

Pubmed, Web of science, Cocohrane (last search updated in May 30, 2016) were searched by using the following keywords (Foxp3 OR Forkhead transcription Factors), (Breast cancer OR breast neoplasm OR breast tumor), (Survival OR prognosis OR outcome OR mortality). The identified studies were selected based on following criteria:

(1) Histological type of cancer was breast cancer. (2) Samples were collected by core-needle biopsy or surgery. (3) FOXP3 expression was detected by immunohistochemistry (IHC). (4) Hazard ratio (HR), odds ratio (OR) and their 95 % confidence interval (CI) were reported; if not, outcomes RFS and OS were reported. (5) Published in English. (6) When duplicate data were reported, only the most recent data were included.

Two investigators independently extracted the data from each study, including the first author's surname, geographical location, sample size, publication date, the source of the subjects, protein detection method, median follow-up time and survival data, the discrepancy was resolved by discussion.

The heterogeneity was assessed by X2 test and the I2 statistic of inconsistency [11, 12]. Statistically significant heterogeneity was defined as X2 P < 0.1 or I2 > 50%. We conducted subgroup analysis by stratifying Tregs location and geographical location. For the pooled analysis of the correlation between FoxP3+ Tregs infiltration and clinicopathological features (Tumor size, histological grade, Lymphnodes metastasis, ER and HER-2 status), odds ratios (ORs) and their 95% CIs were combined to estimate the effect. We performed sensitivity analysis to evaluate the influence of single study on the overall outcome. In addition, we performed funnel plots and Begg's linear regression test to examine publication bias [13]. All analysis was performed using STATA version 12.0.

We extracted RFS data from 8 of the 14 articles and OS data from 11 of the 14 articles. These studies evaluated patients from East Asia, Europe, Middle East and North America, including 3 from China, 2 from Japan, 2 from Korea, 2 from Netherlands, 2 from UK, 1 from Turkey and 2 from Canada. All the included studies evaluated FOXP3+ Tregs with immunohistochemical method. The 14 studies included 10,259 patients, the sample sizes ranged from 86 to 3,277. Six of these studies enrolled less than 200 patients and eight studies included more than 200 patients. The NOS scores of these studies ranged from 5 to 8, thus the quality of all included studies was good. Table 1 listed clinical features of 14 included studies.

Correlation of FOXP3+Tregs with clinicopathological parameters 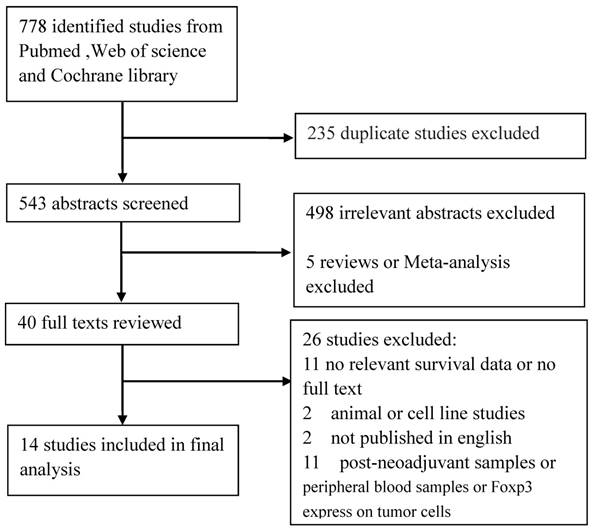 Main features and methodological assessment of the included studies

Meta-analysis of the effects of Foxp3+ Tregs infiltration on RFS of patients with breast cancer. 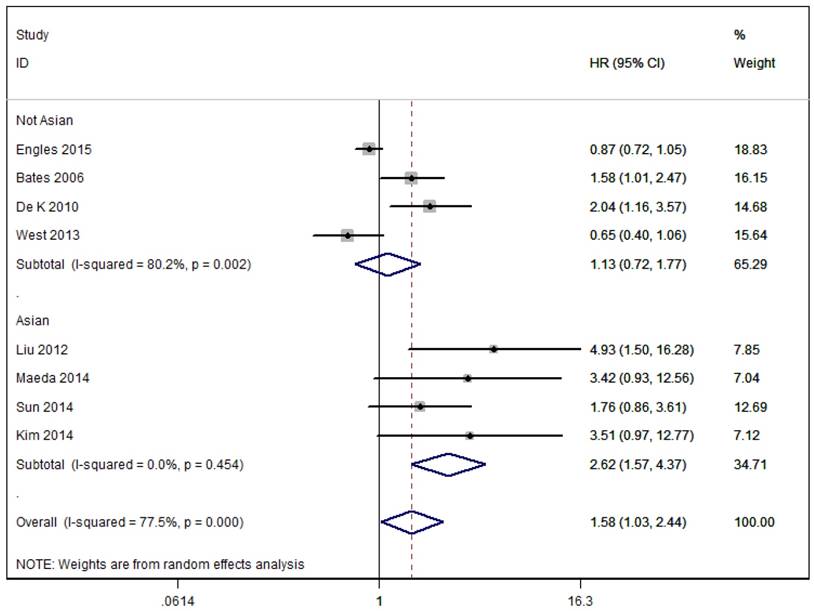 By sensitivity analysis we found similar HRs and 95% CIs if we omitted any single study, indicating that the results of RFS and OS were relatively stable (Figure 4 and 5).

Meta-analysis of the effects of Foxp3+ Tregs infiltration on OS of patients with breast cancer. As Liu et al. 2012 reported two HRs based on the location of Foxp3+ Tregs, we used their data separately. 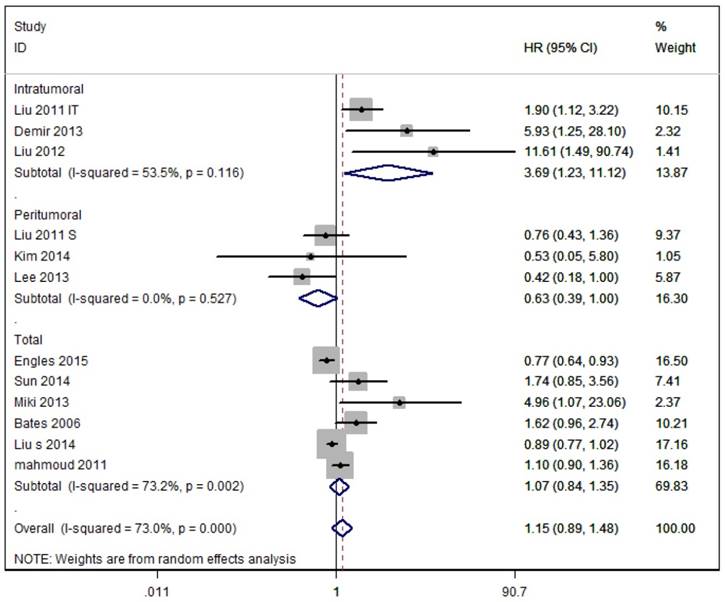 Sensitivity analysis of the pooled hazard ratios coefficients on the relationships between Foxp3+ Tregs and RFS of patients with breast cancer. 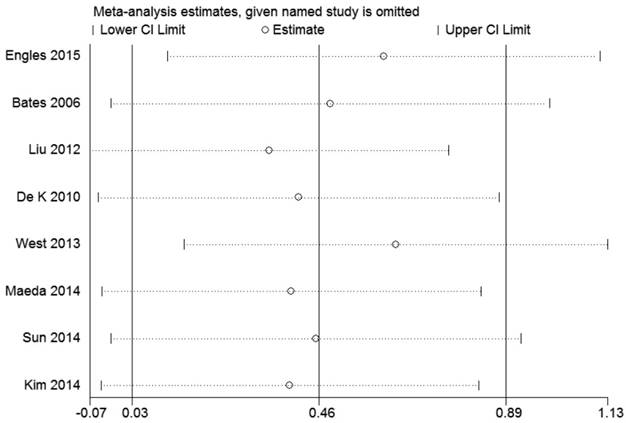 Sensitivity analysis of the pooled hazard ratios coefficients on the relationships between Foxp3+ Tregs and OS of patients with breast cancer. 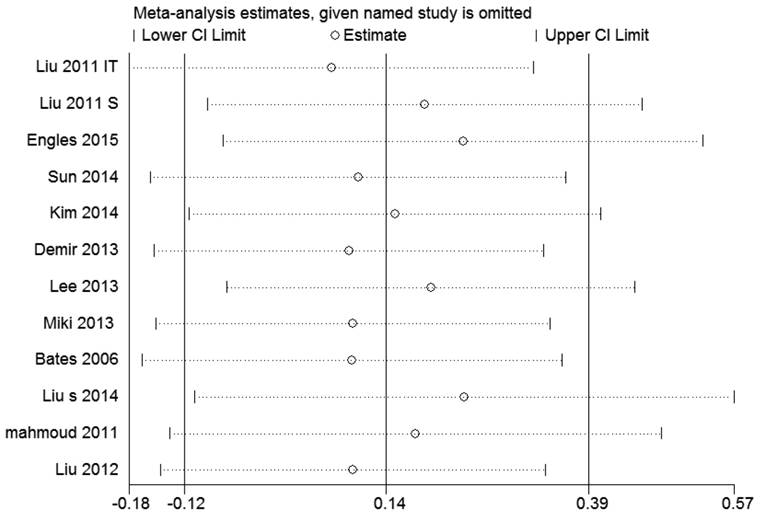 Funnel plot of publication biases on the relationships between Foxp3+ Tregs infiltration and RFS of patients with breast cancer. 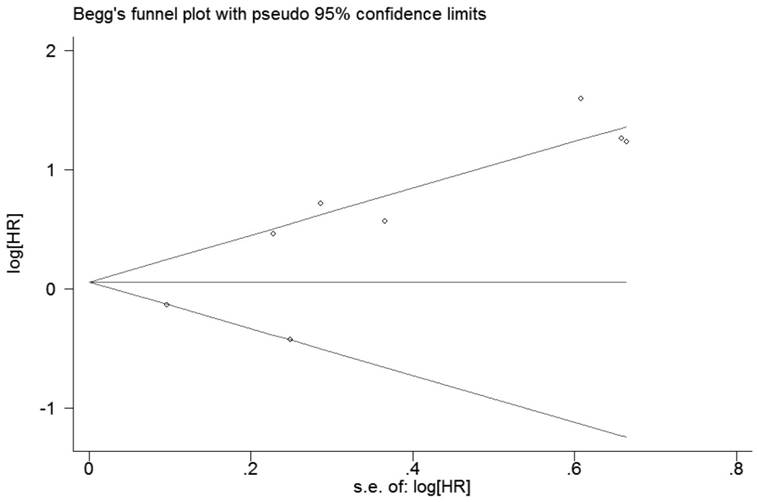 Funnel plot of publication biases on the relationships between Foxp3+ Tregs infiltration and OS of patients with breast cancer. 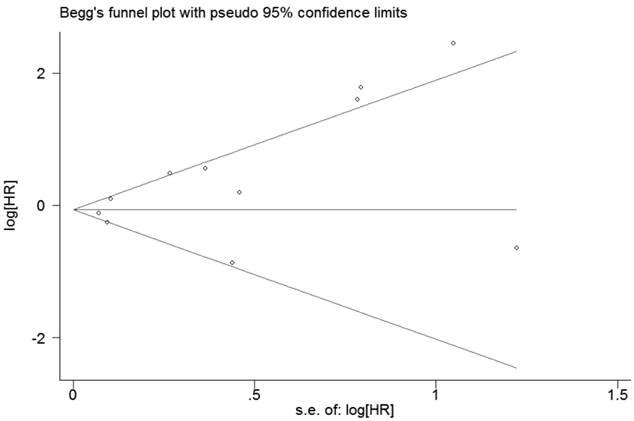 Tumor immunity has big impact on clinical outcome of cancer patients [28]. Tregs play an important role of immunosuppression by regulating the balance between tolerance and rejection of self and altered self and secreting cytokines such as TGF-b, IL-4 and IL-10 [29]. Tregs markers such as GITR, OX-4, CTLA-4, CD127 and transcription factor FoxP3 have been reported, and FoxP3 is regarded as the most specific marker [30, 31]. Emerging evidence suggests that Tregs play an essential role in immune evasion mechanisms of cancer [32-35]. However, prognostic significance of FOXP3+ Tregs in breast cancer patients is still unclear. A study showed that Foxp3+Tregs were associated with good outcome of breast cancer patients [12]. Nevertheless, other studies suggested that Foxp3+Tregs were correlated with poor prognosis of breast cancer [17, 20]. Insignificant association between Foxp3+Tregs and prognosis of breast cancer patients was also reported [15, 16]. The inconsistency may be caused by different genetic backgrounds, chemotherapy agents and surgical procedures. A recent review suggested that Tregs are equipped with cytotoxic potential which may directly kill effector T cell [36]. This may explain the relationship between infiltration of Foxp3+ Tregs and poor RFS of breast cancer patients. In addition, our data showed that high infiltrated Foxp3+ Tregs was associated with a worse OS. However, the results were not statistically significant. As we know, many kinds of factors may affect overall survival rate of patients. Thus Foxp3+ Treg alone may be not enough to predict OS of breast cancer patients.

We acknowledge that our meta-analysis has several limitations. First, we only selected the studies published in English. Second, the test for heterogeneity of included studies was significant (I2 = 77.5%, p<0. 0001 and I2=73%, p<0.001). We employed subgroup analysis and sensitivity analysis to find out the source, but the results were negative. Despite these limitations, the selection process of the eligible articles was strict and all included studies had high quality. Moreover, 10,259 patients were included in our meta-analysis, which made our results convincible.

In conclusion, our meta-analysis indicates that the presence of high levels of FOXP3+ Tregs is associated with poor RFS for breast cancer patients and predicts histological grade, estrogen receptor and HER-2 status.

10. Stang A. Critical evaluation of the Newcastle-Ottawa scale for the assessment of the quality of nonrandomized studies in meta-analyses. Eur J Epidemiol. 2010;25(9):603-605