Increasing evidences indicate that shikonin can suppress the tumor growth. However, the mechanisms remain elusive. In the present study, we investigated the effects and mechanisms of shikonin against esophageal cancer. The expression of hypoxia inducible factor 1α (HIF1α) and pyruvate kinase M2 (PKM2) in esophageal cancer tissues and cells was detected by immunohistochemistry and Western blot. CCK-8 was used to examine the esophageal cancer cell viability. Apoptosis and cell cycle were analyzed by flow cytometry. The expression of EGFR, PI3K, Akt, p-AKT, mTOR, HIF1α and PKM2 was detected by Western blot. EC109/pkm2 was established by lentivirus transducer. Ec109 tumor model was founded to observe the antitumor effect of shikonin in vivo.

Esophageal cancer is the sixth leading cause of cancer-related worldwide, including two main types: esophageal squamous cell carcinoma (ESCC) and Esophageal adenocarcinoma (EAC) [1, 2]. Most subtype of EC is ESCC which accounts for 87% of cases in 2012[3]. Although the development of surgical techniques, radiotherapy and chemotherapy, the survival rate of five years is still about 19% [4]. Thus, it is urgent to find new drugs to treat esophageal cancer.

Tumor metabolism is an emerging hallmark of cancer cells. The reprogramming of cellular metabolism is critical to maintain survival and limitless proliferation of cancer cells under severe conditions during development. Acrobic glycolysis [5] is a vital biological characteristics of cancer, not only because it provides tumor cells with energy and raw materials for the synthesis of biomacromolecular but also have close relationship with anti-apoptosis, invasion, metastasis and drug resistance of tumor cells. Hypoxia-inducible factor-1 (HIF-1), a molecular determinant of responses to hypoxia in mammalian cells, is a heterodimer consisting of two subunits, an oxygen-sensitive HIF-1α and a constitutively expressed HIF-1β. HIF-1 activity in tumors depends on availability of the HIF-1a subunit, the levels of which increase under hypoxic conditions and through activation of oncogenes and/or inactivation of tumor suppressor genes. HIF1α [6, 7] is required for hypoxia-induced cell cycle arrest, the mechanism that the enhancing stability of HIF-1α protein regulated cyclinD1 expression under hypoxia condition. HIF-1α [8] induced G0/G1 phase arrest may account for the resistance of cancer cells to some certain chemotherapeutic agents that target DNA synthesis in S phase. Elevated expression of HIF-1α is usually detected in various solid tumors including colon [9], breast [10], prostate [11], and lung cancers [12], and is associated with resistance [13] to therapies and poor prognosis in multiple cancers. PKM2 [14-16], a downstream molecular of HIF1α, is key enzyme invoved in the aerobic glycolysis of cancer cells. Inhibiting PKM2 can result in the decreased intacellular ATP and increased intake of anticarcinogen, and further promotes therapeutic sensentivity.

Shikonin [17] is a natural naphthoquinone isolated from a traditional Chinese medicine, the plant Lithospermum erythrorhizon, (zicao). Many studies [18-20] have proved that shikonin can suppress multiple types cancers, including breast cancer, hepatocellular cancer etc. However, the effects and mechanisms of shikonin against esophageal cancer remain elusive.

Tumor tissues were embedded and sectioned (4-5μm). Then, sections were dewaxed in xylene, rehydrated through decreasing concentrations of ethanol, and washed in PBS. Next, Immunostaining was undertaken using anti-human HIF1α (1:100) and PKM2 (1:100) monoclonal antibody at 4°C. After incubation with the appropriate HRP-labeled second antibody, immunostaining was performed by DAB according to manufacture instruction. Immunostaining results were evaluated to be graded 0, 1, 2 and 3 according to the extent of staining by two pathologists.

Human Esophageal cancer cell EC109, EC9706 cells and Human Esophageal Epithelial Cells (HECC) were provided from ATCC. Cells were grown in 1640 supplemented with 10% (vol/vol) fetal bovine serum and were maintained in a humidified chamber at 37°C.

Cell proliferation was determined by CCK-8 assay. Cells were seeded at 5×103 cells/well in 96-well plates and cultured for overnight at 37°C. Cells were treated with shikonin of different concentrations for 24h and 48h. Absorbance was determined at 450nm using an enzyme-linked immunosorbent assay reader.

The total protein was exacted from cells according to standard procedures, then separated by SDS-PAGE gel electrophoresis and transferred to PVDF membranes. The membranes were blocked, then incubated with primary antibodies overnight, followed by incubation with appropriate HRP-conjugated secondary antibodies (1:5000 dilutions). The blots were detected using ECL chemiluminescence according to the manufacturer's instructions.

Total RNA was isolated from cells by using Trizol reagent. RT-PCR was performed using SYBR premix EX Tag reagents by two steps according to manufacturer's instructions. The specific primers were as follows:

Ec109 and EC9706 Cells were seeded in six-well plates at 4×105 per well. Cells were treated with varying concentration of shikonin for 24h. Cell cycle was assayed by measuring DNA fragment staining with PI. Cell apoptosis was evaluated by Annexin-v-FITC and PI staining. All procedures were conducted according to the instructions of cell cycle kit and cell apoptosis kit.

To transduce the cells, the total volume of 300μL medium was added which contained 100μL of the packaged viral supermatant (MOI=1 0). After 24 h 500 μl medium without virus solution were replaced. The fluorescence emission of cells was observed 72 h after transduction. 100μLof cell suspension containing single cells were added to each well in 96-well plates. Cells were conventional cultured for 20 days to select good positive clones with good growth state, and then picked for expanding culture. After expanding culture and preservation, it was named Ec109/PKM2.

Ec109 tumor model was established to observe the antitumor effect of shikonin in vivo. Nude mice (6-six-week) were purchased from vital River Laboratory Animal Technology (Co. Ltd., Bei Jing). Mice were injected with Ec109 (5×106) in the dorsal area. The mice were divided randomly into two groups: shikonin treatment group(20μg/dose/day) and control group (injected with DMSO) after 7days (each group has 7 mice). Treatment was performed for 21 days. Tumor volumes were evaluated every 3 days according to the following formula:

All data were analyzed with SPSS 17.0 software system. Significance of the differences was considered at P < 0.05.

To explain the mechanism of shikonin inhibiting the proliferation of esophageal cancer cells, we detect the cell cycle and apoptosis after shikonin treatment. We found that shikonin induced cell cycle arrest in EC109 and EC9706. (Fig.3 A) and increased the proportion of apoptosis. (Fig.3B) 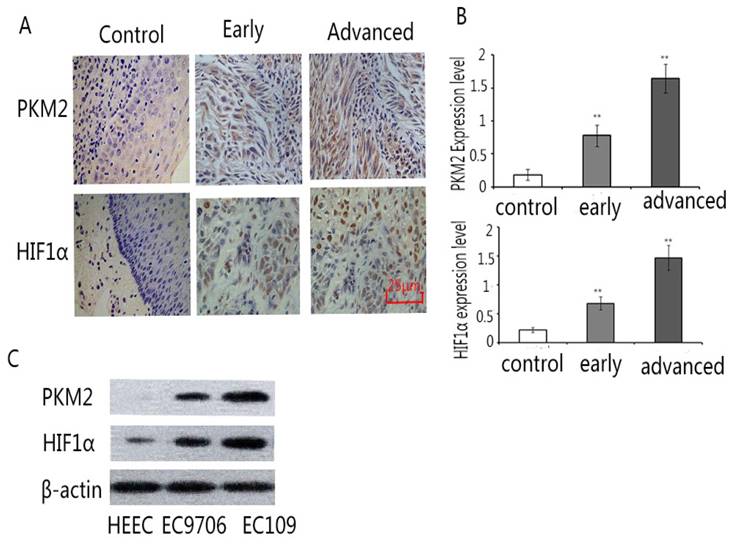 Shikonin inhibited the proliferation of esophageal cancer cells. Esophageal cancer cells were treated with different concentrations of shikonin(0,1,2,4μg/ml) for 24,48h. CCK-8 was used to detect the cell viability. The results showed that Shikonin decreased EC109 (A) and EC9706 (B) cell viability in a time and dose-dependent manner. Data was described as the means±SD of three independent experiments. (*P<0.05, **P<0.01) 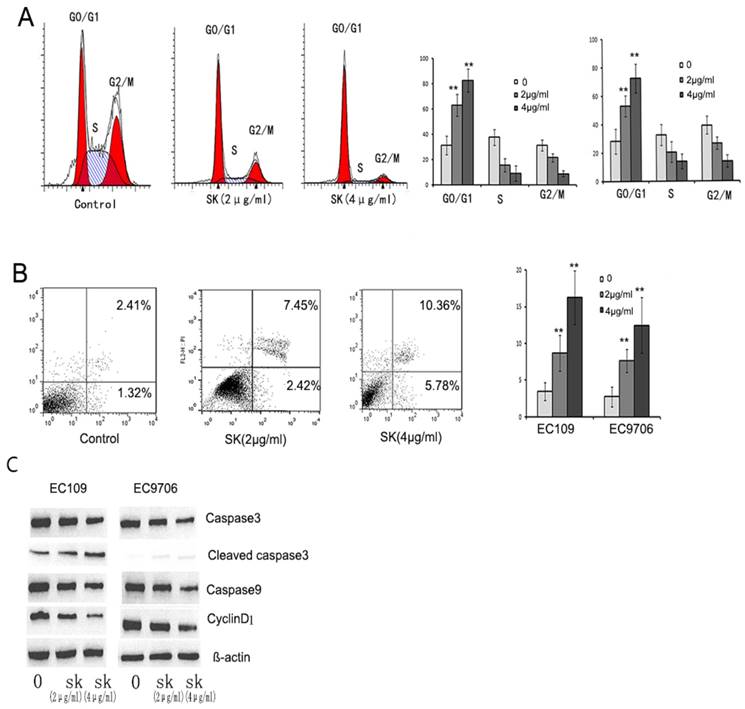 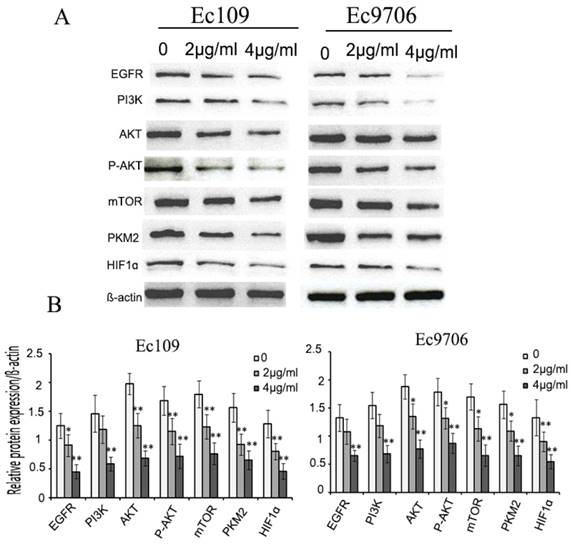 PKM2 overexpression increased resistance of EC109 to shikonin. EC109/PKM2 stable cell was established by transducing Lentivirus plasmid according to previous methods. RT-PCR(A) and Western blot(B) showed that the expression of PKM2 was higher in EC109/PKM2 cell than EC109 cell. C. Cell viability was detected by CCK-8 assay. The results showed cell viability and resistance of EC109/PKM2 cells to shikonin increased evidently compared to EC109 cells. D. Shikonin decreased the expression of PKM2 and cyclinD1 in EC109 and Ec109/pkm2 cells. *p<0.05, **p<0.01 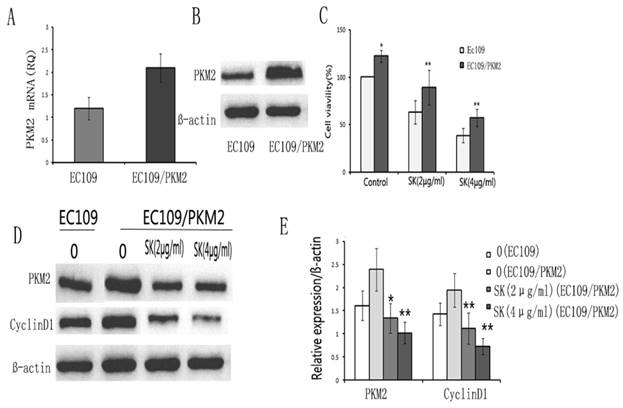 Antitumor effect of shikonin in vivo

In the present study, our results showed the expression of PKM2 and HIF1α increased in early and advanced esophageal cancer tissues, and found that shikonin inhibited the proliferation of esophageal cancer cells in vitro and in vivo. The antitumor mechanisms of shikonin may be associated with regulating HIF1α/PKM2 signal pathway.

Shikonin suppressed the proliferation of EC109 cells in vivo. EC109 tumor model was established to observe the antitumor effect of shikonin in vivo. Mice were treated with DMSO or shikonin (300 mg/Kg/day) for 21 days at the same time (n = 7per group). Two mice in experimental group were dead at 13 and 18 days after tumor cells injection. A. The tumor growth curve. The results showed shikonin suppressed the tumor growth (n=7, p < 0.01). Data are shown as mean ±SD. B. Representation of photos of tumors from mice bearing Eca109 receiving different treatments. C. Typical graph of IHC staining of PKM2, HIF1ɑ and cyclinD1 in tumor tissues. (×200). D. The average staining intensities of PKM2, HIF1ɑ and cyclinD1. Staining intensities were graded as 0,1,2,3 by two pathologists, respectively. The results showed that Shikonin treatment significantly decreased the expression of PKM2, HIF1ɑ and cyclinD1. s. (**P<0.01) (E) Typical sections of apoptosis from tumor tissue. F. apoptotic index within tumor tissues. Shikonin showed a significant increase of apoptotic cells in tumor tissues compared to the control (**P<0.01). Data are expressed as the mean apoptotic index ±SD. 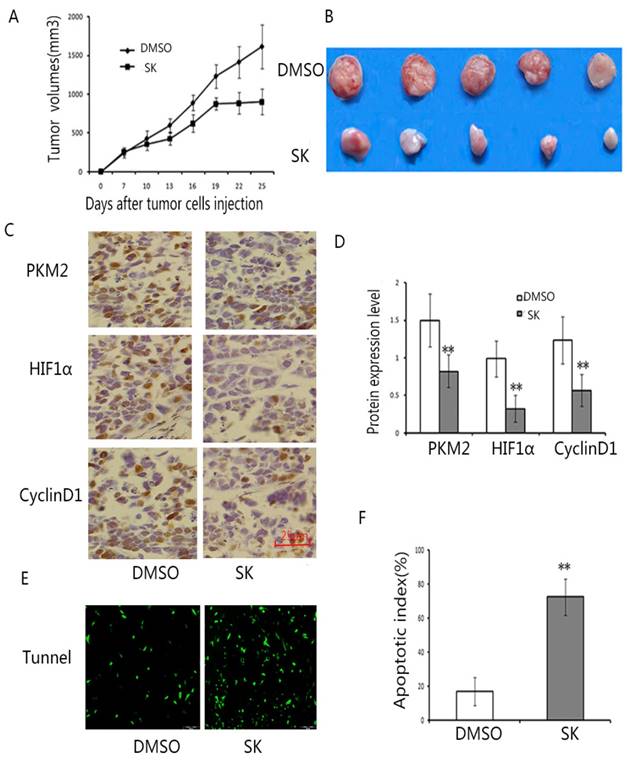 Many studies [21-23] have found shikonin had antitumor effect in various cancer types, the mechanisms of which were given on the aspects of induction of apoptosis, necrosis, acting on proteasome, protein tyrosine kinase and anti-angiogenesis. The molecular mechanisms mainly included stimulating ROS generation [22] in the mitochondria, inhibiting the activities of DNA topoisomerases, increasing expression of p53[23, 24] and inhibition of cancer cell glycolysis via targeting PKM2, polo-like kinase1 (PLK1) and protein tyrosine kinase (PTK) [19, 25]. Compared with previous studies, our study found that shikonin inhibited HIF1α/pkm2/CyclinD1 signal pathway to regulate the proliferation of esophageal cancer cells. To our knowledge, it is the first time to prove that HIF1α/ PKM2/cyclinD1 signal pathway may be a new target of shikonin against esophageal cancer cells.

HIF-1α [12, 26, 27] has been an important role in the regulation of tumor proliferation, which is shown to activate multiple target genes that involve in crucial aspects of cancer biology, including angiogenesis, glucose metabolism, cell proliferation/survival and apoptosis. Increased the expression of HIF1α is connected with rising risk of mortality in various types of cancers, including esophageal cancer. PI3K/AKT/HIF1α signal pathway plays an important role in the regulation of tumor glucose metabolism. PKM2, a key downstream molecular of HIF-1α is key enzyme involved in the aerobic glycolysis of cancer cells. Previous studies [28, 29] have proved that inhibiting PKM2 can decrease intracellular ATP, and then suppress the proliferation of cancer cells. PKM2 may be a new biomarker for many cancers, such as lung cancer, breast cancer. In the present study, we found esophageal cancer tissue was high expression of HIF1α and PKM2 compared to normal esophageal tissue. Furthermore, our results showed that shikonin inhibited the esophageal cancer cells proliferation, accompanying with decreased the HIF1α and PKM2 expression indicating that shikonin suppressed the cancer cells proliferation via HIF1α/PKM2 signal pathway.

HIF1α is a downstream molecular of EGFR/PI3K/AKT/mTOR signal pathway. Previous studies [21, 30] have proved that shikonin can inhibit EGFR-signaling to suppress cell proliferation in various cancers cells. PI3K is an important downstream molecular of EGFR. In the current study, our results showed that shikonin suppressed the EGFR/PI3K/AKT/mTOR signal pathway, decreasing the expression of HIF1α and PKM2.

CyclinD1 [31, 32], a target gene of HIF1α, is key mediator of cell growth and proliferation in cancer cells. Some researches [33, 34] had proved that HIF1α regulated the expression of cyclin D1, and then promoted G1/S cell cycle transition and cell proliferation, which the mechanisms may be associated with transcriptional coactivator for Pkm2. Specifically, Pkm2[35] interacting with HIF1α promotes the transactivation of HIF1α target genes. In the current study, we found that shikonin decreased the expression of cylcinD1, indicating that shikonin reduced the esophageal cancer cells proliferation by suppression HIF1α / PKM2/cyclin D1 pathway.

To prove that the role of PKM2 in mediating antitumor effect of shikonin, EC109/PKM2 cell was established by Lentivirus transduced. The results showed that the resistance of EC109/pkm2 to shikonin was obviously enhanced compared with EC109 cells. These results suggest that shikonin inhibits esophageal cancer cells by inhibiting HIF1α / PKM2. Furthermore, we found that shikonin reduced tumor growth in vivo, displaying that shikonin may be a new drug against ESCC. Moreover, Shikonin increased tumor cells apoptosis, decreasing PKM2, HIF1α and cyclinD1 expression in vivo. These are consistent with previous in vitro results.

However, our results have some limitations. Specifically, shikonin has serious side effects in vivo. We found that mice have weight loss, spirits drooping, even dead after shikonin administration. How to reduce adverse effects needs to further study. Therefore, more experiments are necessary to transform to a clinical trials.

This work is supported by the Research Fund for the Doctoral Program of Higher Education of North of Sichuan Medical college (CBY13-QD-04), Major Project of Education Department in Sichuan (10ZA168) and Applied Basic Research Programs of Science and Technology Commission Foundation of Si Chuan Province (2013JY0071).