Background: Increased karyopherin alpha 2 (KPNA2) expression has been demonstrated in epithelial ovarian carcinoma (EOC) tissue. However, its role in the disease is not clear. Here, we investigate the mechanism of involvement of KPNA2 in EOC.

Conclusions: KPNA2 may reduce the migration and invasion of EOC by inhibiting the Akt/GSK-3β/Snail signaling pathway and suppressing EMT.

Epithelial ovarian carcinoma (EOC) kills more women than any other gynecological malignancy. In 2014, it is estimated there were >14,000 EOC deaths and nearly 22,000 new cases [1]. The condition is often diagnosed late (at an advanced stage) and has a high metastasis rate. It is therefore crucial to understand the molecular mechanisms of EOC and to improve the available therapies.

Deregulation of cellular transport machinery occurs frequently in tumors. Increased expression of karyopherin alpha 2 (KPNA2), a protein that functions in nucleocytoplasmic transport, has been shown in melanoma [2], and cancers of the cervix [3], esophagus [4], lung [5], prostate [6], brain [7], liver [8], and bladder [9]. KPNA2 is overexpressed in human EOC tissues and cell lines [10], and overexpression is correlated with poor prognosis in EOC [10]. Nevertheless, the mechanism of KPNA2 in EOC pathogenesis remains to be conclusively determined. Here, we investigated the effects of KPNA2 overexpression and knockdown in EOC cell lines in vitro.

Cell invasiveness used Matrigel-coated Invasion Chambers (8 μm; BD Biosciences, San Jose, CA) according to the manufacturer's protocol. Transfected cells (~25,000 per well) were resuspended in serum-free medium, then transferred to the upper chamber of a Matrigel-coated insert. Medium in the lower chamber included 10% FBS. Cells were incubated at 37°C for 24 h, then cells on the upper surface were removed and discarded. Cells that had invaded the lower surface were fixed and stained with 0.05% crystal violet for 30 min and counted microscopically.

Cells were incubated briefly with primary antibodies against α-catenin, vimentin, E-cadherin or N-cadherin, and then incubated with rhodamine-conjugated or FITC-conjugated goat anti-rabbit or anti-mouse IgG. Coverslips were counterstained with 4',6-diamidino-2-phenylindole. Images were collected using a confocal laser-scanning microscope (FV1000, Olympus) and processed in Adobe Photoshop 7.0.

Statistical analysis was performed using the SPSS software package (version 16.0, SPSS). A P-value of <0.05 was considered statistically significant. For the in vitro studies, statistical significance was verified using a Student's t-test (two tailed).

KPNA2 is essential for EOC cell migration and invasion 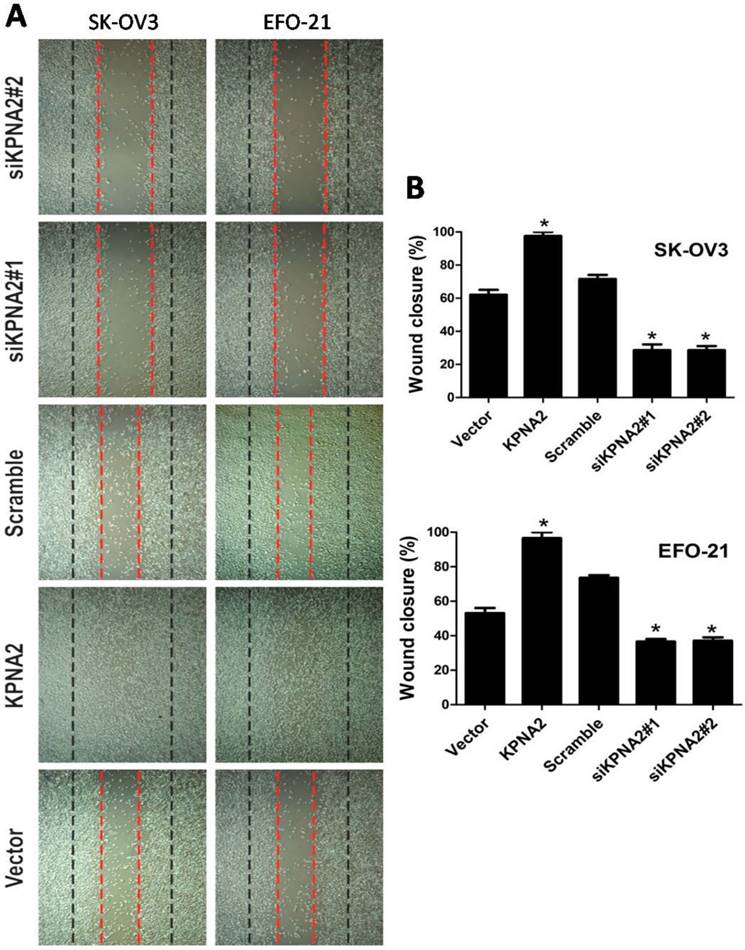 Effect of KPNA2 on EOC cell invasion. A, Invasion ability induced by fetal bovine serum as analyzed by the Transwell migration assay (×200; *P < 0.001). B, quantification of invasive properties induced by fetal bovine serum in EFO-21 and SK-OV3 cell lines stably overexpressing KPNA2 or infected with KPNA2 shRNA(s) relative to the control. Data were obtained from three independent experiments and described similar results. 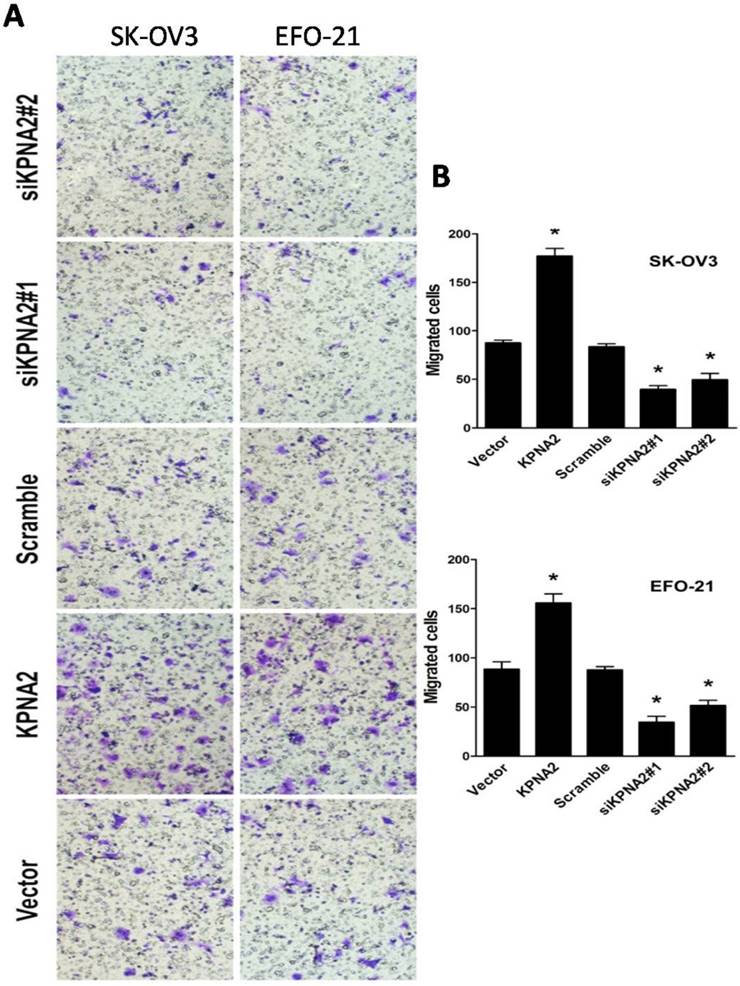 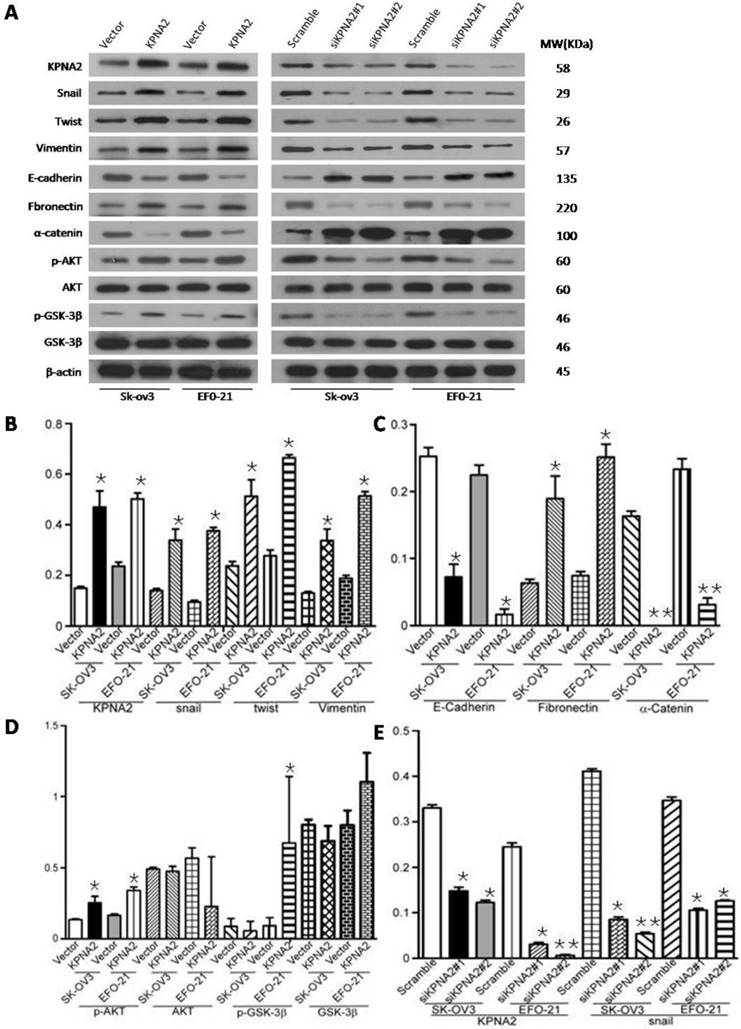 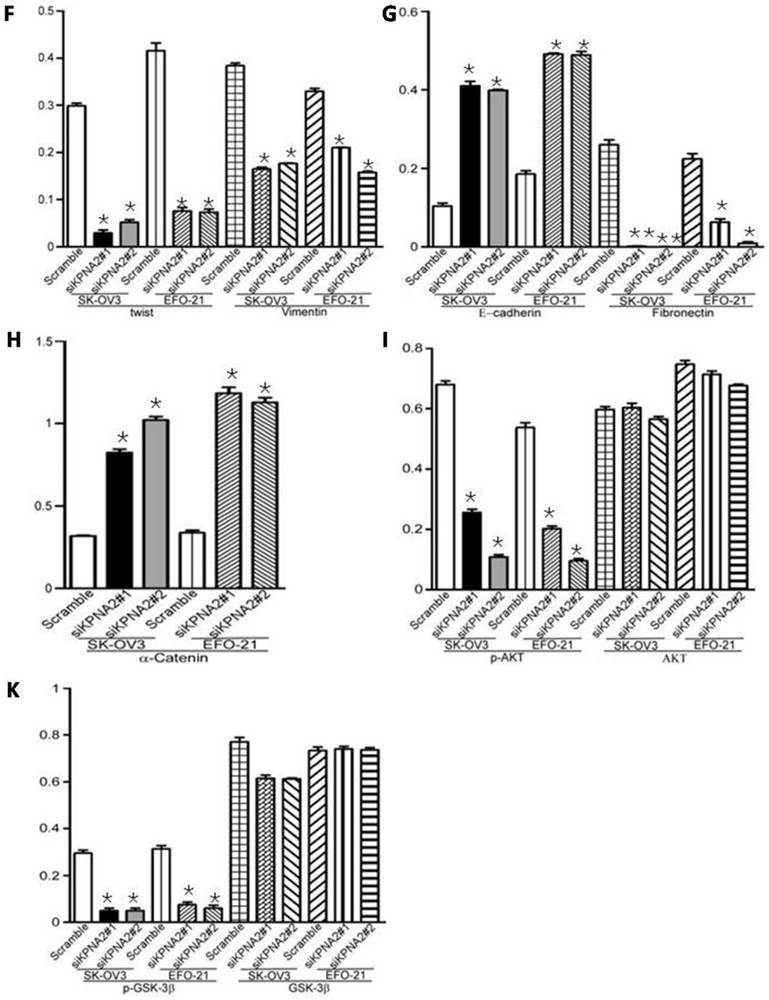 Effect of KPNA2 gene expression on epithelial-to-mesenchymal transition in EOC cells. KPNA2-overexpressing and KPNA2 shRNA(s)-infected SK-OV3 cells were placed on coverslips pre-coated with 10% fetal bovine serum/RPMI-1640. After an additional 24 hours, cells were stained for E-cadherin, α-catenin, N-cadherin, vimentin, and 4',6-diamidino-2-phenylindole (DAPI) and analyzed by confocal microscopy. The red signal represents staining for the corresponding protein, while the blue signal signifies nuclear DNA staining with rhodamine. 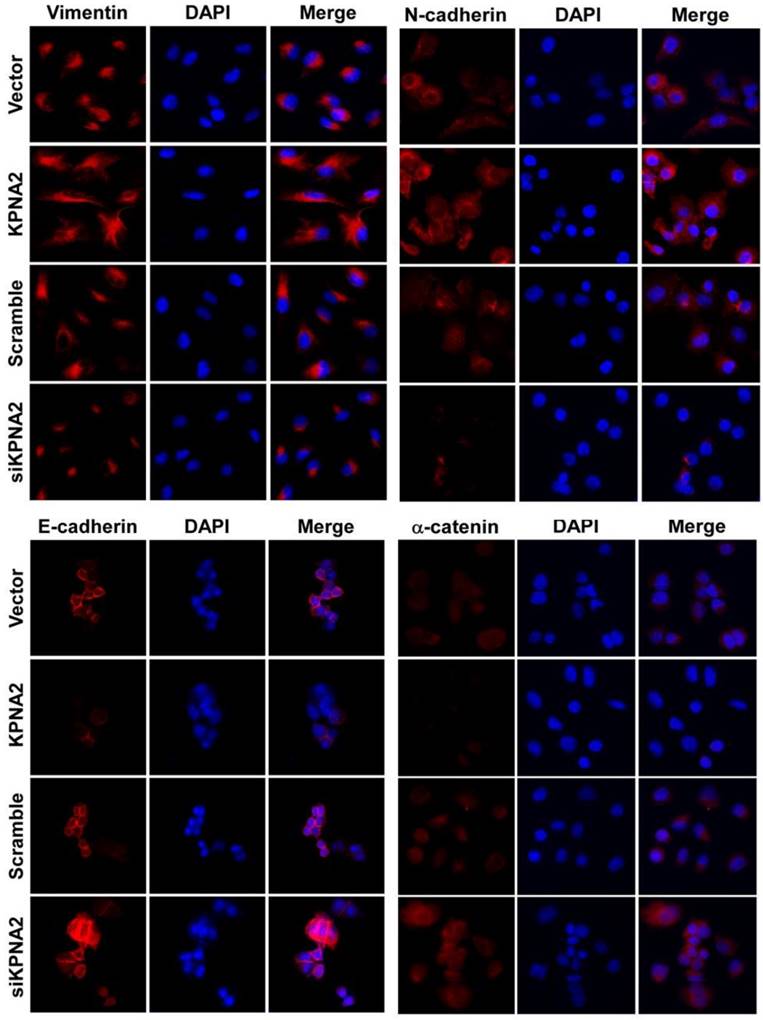 Scheme of the c-Myc-mediated KPNA2-induced epithelial-to-mesenchymal transition (EMT) in EOC cells. KPNA2 induces EMT, which subsequently contributes to invasion by EOC cells. In addition, KPNA2 also transports c-Myc into the nucleus and triggers the Akt/GSK-3β/Snail pathway, which is required for KPNA2-induced EMT.

KPNA2 mediates signaling factor import into the nucleus, and export of response molecules to the cytoplasm [12]. KPNA2 is suggested to be involved in a variety of malignancies, but the mechanism remains uncertain [2, 13]. Previously, we showed that that mir-26b suppresses EOC cell growth and metastasis by decreasing KPNA2 and octamer-binding transcription factor 4 expression [14]. The key outcome of the present work is that migration and invasion of EOC cells were significantly increased by KPNA2 overexpression. Such overexpression also resulted in an increase in the EMT characteristics of EOC cells: epithelial cell markers were decreased and mesenchymal markers were increased. EMT is important for invasion, metastasis and drug-resistance of cancer cells [15].

EMT is regulated by various signaling pathways, including nuclear factor kappa B, Wnt, transforming growth factor-β, Notch, and Akt/GSK-3β/Snail [15]. Overexpression of KPNA2 increased the expression of phosphorylated Akt and GSK-3β, whereas knockdown of KPNA2 decreased them. The latter effect was probably mediated by inhibition of c-Myc transactivity and Akt kinase activity, and suppression of FOXO3a activity [16]. FOXO3a is a transcription factor whose activity is principally regulated by post-translational modification (PTM) and nuclear-cytoplasmic shuttling; PI3K/AKT pathway-regulated phosphorylation is the principal PTM that controls the subcellular localization of FOXO3a [17, 18]. In addition, Spalt Like Transcription Factor 4, which is an EMT and drug-resistance inducer, was shown to induce EMT by regulating c-Myc [19], and activated FOXO3a played a key role in doxorubicin-induced EMT in hepatocellular carcinoma cells [20]. The findings of the present study strongly suggest that KPNA2 functions as an oncogenic protein in the development and progression of EOC. Downregulation of KPNA2 significantly decreases the invasiveness of EOC cells and reverses EMT by inhibiting the Akt/GSK-3β/Snail pathway.

We propose a mechanism for the role of KPNA2 in EOC pathogenesis: KPNA2 may transport c-Myc into the nucleus where it regulates transactivity, triggering Akt/GSK-3β/Snail pathway-mediated EMT and subsequent metastasis (Fig. 5). Further research is underway to validate both this hypothesis and KPNA2 as a therapeutic target for EOC.

This work was supported by the National Natural Science Foundation of China [grant numbers 81460393 to Long Huang, 81372275 to Min Zheng].