Among gynecological malignancies, ovarian cancer is the leading cause of cancer-associated death worldwide. An estimated 238,700 new cases and 151,900 deaths occurred in 2012, and 58% of new cases occurred in developing countries [1]. Approximately 22,280 women were newly diagnosed with ovarian cancer and 14,240 women were expected to die from ovarian cancer in the United States in 2016 [2]. Recent advances in the diagnosis and treatment of ovarian cancer have led to high expectation for long-term survival of patients with early-stage disease. However, a limited improvement in survival rates has been achieved over the past decade. Ovarian cancer remains extremely difficult to treat, and the 5-year survival rate remains below 40% [3]. Like many other types of malignancy, ovarian cancer progresses through processes that include initiation, local progression and metastasis, which are likely associated with a wide variety of genetic aberrations [4, 5]. Furthermore, most ovarian cancer patients are diagnosed at an advanced stage characterized by extensive invasion and metastasis, and these patients have an extremely poor prognosis and a high mortality rate. However, the precise mechanisms of ovarian cancer invasion and metastasis remain undefined. Therefore, it is necessary to identify new prognostic biomarkers and therapeutic targets to improve treatment strategies.

Calpain is a highly conserved family of calcium-dependent, non-lysosomal cysteine proteases that selectively catalyze the proteolysis of many specific substrates involved in various cell processes, including motility, proliferation and apoptosis [6-10]. Thus far, fifteen calpain isoforms have been identified and characterized in mammals [11]. Among them, calpain-1 and calpain-2, which contain large 80-kDa catalytic subunits, are ubiquitously expressed and are primarily considered cytoplasmic enzymes. Capn4 is a small regulatory subunit (28 kDa) of the calpain proteolytic system and plays an essential role in maintaining calpain-1 and calpain-2 stability and activity [12]. Accumulating evidence has indicated that defects in Capn4 lead to the dysfunction of calpain-1 and calpain-2, which can in turn cause early embryonic lethality [13]. Recent studies have shown a close correlation between Capn4 expression and the prognosis of patients with solid tumors, such as glioma [14], hepatocellular carcinoma [15], nasopharyngeal carcinoma [16] and breast cancer [17]. Furthermore, siRNA-mediated silencing of Capn4 resulted in markedly decreased migration, invasion and proliferation of cancer cells [18-20].

However, it is still unclear whether Capn4 could serve as a potential biomarker or as a novel therapeutic target for the early diagnosis and treatment of ovarian cancer. Thus, in this study we examined Capn4 expression in ovarian cancer tissues using IHC, qRT-PCR and Western blot analyses. In addition, correlation analysis was performed to investigate the association between Capn4 expression and clinicopathological features and prognosis in ovarian cancer patients.

A total of 113 ovarian cancer and 35 non-tumor tissue samples were obtained from patients undergoing surgical resection in the Department of Obstetrics and Gynecology at the First Affiliated Hospital of Nanchang University (Nanchang, China) between January 2006 and December 2010. Ovarian cancer and non-tumor tissue specimens were collected from the patients, immediately frozen in liquid nitrogen after removal and maintained at -80°C until use. None of the enrolled patients received chemotherapy or radiotherapy prior to surgery. Diagnosis and differentiation of ovarian cancer were defined according to World Health Organization criteria [21]. According to postoperative pathology, 98 patients received six cycles of platinum-based chemotherapy as follows: paclitaxel (135 mg/m2) and cisplatin (75 mg/m2) or paclitaxel (175 mg/m2) and carboplatin (AUC6). This study was approved by the Ethics Committee of the first Affiliated Hospital of Nanchang University (Ethical Approval No. 2013023; Date:12 March 2013), and informed consent was obtained from each patient. The main clinical and pathological features, including age, histological subtype, FIGO stage, tumor size, distant metastasis and tumor grade, are summarized in Table 1. All the patients got follow-up for 60 months from the date of surgical resection. Overall survival (OS) was defined as the period of time between the date of the initial surgery and death or the last follow-up. Progression-free survival (PFS) was defined as the date from the initial surgery to the date of disease progression or the date of patient death from any cause.

Paraffin-embedded ovarian cancer tissues were cut into 5-μm sections and then subjected to IHC using standard protocols. The primary antibody for Capn4 (Santa Cruz Biotechnology, Santa Cruz, CA, USA) was diluted 1:100. To avoid bias, the slides were independently reviewed by two experienced pathologists blinded to the clinical data. The percentage and intensity of Capn4-positive cells in randomly selected fields were assessed to determine Capn4 expression as described previously [22]. Briefly, the percentage was scored as follows: 0 (0%), 1 (0%-10%), 2 (10%-50%), and 3 (>50%). The intensity was scored as follows: 0 (negative staining), 1 (weak staining), 2 (moderate staining), and 3 (intense staining). The final scores of Capn4 expression, ranging from 0 to 9, were calculated by multiplying the percentage score by the intensity score. Patients with a final score of <4 were classified as low expression group and vice versa. 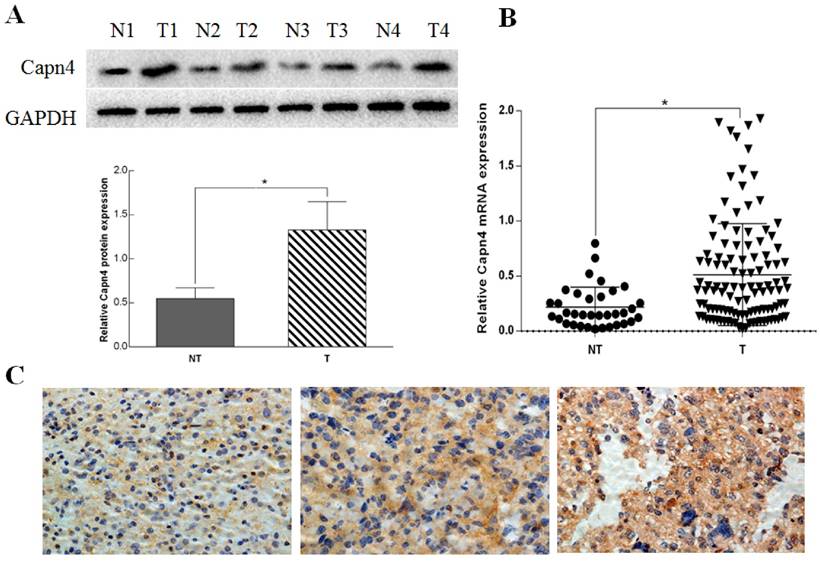 Ovarian cancer is the most common and lethal malignancy in women. Most women are diagnosed with advanced-stage disease, characterized by extensive invasion and metastasis as well as poor prognosis. Up to now, no sensitive and specific biomarkers have been identified for early diagnosis of ovarian cancer.

The small regulatory subunit Capn4 plays an essential role in maintaining calpain stability and activity, and calpains play important role in cytoskeletal remodeling, proteolytic modification, gene expression regulation and substrate degradation [24]. Aberrant expression of Capn4 is prevalent in a wide spectrum of cancers and high levels of Capn4 are associated with poor patient outcomes [15-18]. Therefore, Capn4 might be a candidate diagnosis biomarker and a therapy target for cancer. However, there has no report on Capn4 expression levels in ovarian cancer.

However, this study has limitations because we did not explore the precise mechanism by which Capn4 affects prognosis and outcome in ovarian cancer patient. Further experiments in cell and animal models of ovarian cancer are needed to understand biological processes regulated by Capn4 in ovarian cancer progression.

This study was supported by the National Nature Science Foundation of China (No. 81260381).