Conclusion The expression level of GP73 is critical for the resistance of OXA in HCC cell lines.

Primary hepatocellular carcinoma (PHC) is the sixth most commonly occurring cancer in the world and the third largest cause of cancer mortality [1]. The incidence of PHC is 37.5% in China [2]. Most PHC patients are hepatitis B carrier and have liver cirrhosis background. They are often diagnosed at late stage, lacking operation opportunities. Thus, ablation or TACE treatment of PHC patients with systemic chemotherapy is commonly used in palliative treatment.

Oxaliplatin (OXA) is the third-generation platinum analog, which is cell cycle non-specific drug and has been shown efficacy against many tumor cell lines, including some that are resistant to cisplatin and carboplatin. It is currently considered as the most effective chemotherapy drugs for PHC patients. Like other platinum-based compounds, OXA exerts cytotoxic effect mainly through DNA damage. OXA induces DNA lesion crosslinks formation, blocks DNA and mRNA synthesis [3]. In the treatment of advance PHC patients, OXA has achieved a certain effect. However, the efficacy of chemotherapy contained OXA to liver cancer are only 8.15% to 15.6% [3, 4]. The efficacy of OXA on PHC did not show encouraging results and chemotherapeutic resistance has become a huge obstacle in cancer treatment. Therefore, the mechanism of chemotherapeutic resistance in HCC requires further studies.

Golgi protein-73 (GP73) was originally detected in hepatocytes of patients with hepatocellular carcinoma caused by adenovirus. It also expresses in epithelial cells such as stomach, spleen and colon. In the normal hepatobiliary system, GP73 only expresses in adult bile duct epithelium while liver cells do not express it [5]. However, GP73 is highly expressed in HCC cells, regardless of whether viruses' infection exist or not [6]. Secretory GP73 is also found in serum of patients with HCC. Some studies suggested that GP73 serum levels can assist HCC diagnosis and prediction, showing even better efficacy and accuracy than AFP [7, 8]. Additionally, the increase of GP73 after treatment predicts a higher tumor recurrence rates in HCC [9]. Moreover, the expression level of GP73 in hepatocellular carcinoma is related to tumor size, tumor invasiveness, and tumor differentiation [10]. Using cDNA microarray, Takeyasu katada et al found that GP73 gene highly expressed in high-resistant TE4 esophageal cancer cells and the sensitivity of TE4 cells to cisplatin was significantly increased after GP73 inhibition [11]. Thus, we hypothesize that GP73 may be involved in the chemotherapeutic resistance of HCC. However, no report about GP73 and chemo-resistance of HCC is found. The aim of this study was to investigate the effects of the manipulation of GP73 on OXA resistance of HCC cell lines.

The antibodies used in this study were as follows: mouse-derived anti-GP73 antibody (Proteintech); the secondary antibodies in this study were derived from Jackson ImmunoResearch. The expression of GP73 was detected by Western blotting (1: 800 dilution). The secondary antibody was either mouse anti-IgG or rabbit anti-IgG (1: 8000 dilution). An enhanced chemiluminescent agent, supplied by Millipore Corporation, is used for immunoreaction detection. For immunofluorescence, Alexa Fluor® 488 Donkey Anti-Rabbit IgG (Invitrogen, No: A21206, 1:1000) and Alexa Fluor® 555 Donkey Anti-Goat IgG (Invitrogen, No: A21432, 1:1000) were applied as secondary antibodies. Experiments were conducted based on standard protocols.

The siRNA sequence was the following: Si RNA 1: 5'-agggaaacgtgcttggtaa-3'; Si RNA 2:5'-gaatagaagaggtcaccaa-3'. Lentiviral vectors encoding shRNA were designed based on the sequences of siRNA to knock down GP73 expression (GP73-KD). These vectors were constructed by Hanyin Co. (Shanghai, China). The recombinant lentiviruses (KD) and negative control (NC) lentivirus were prepared and titered to 109 transfection units (TU)/mL. To obtain stable cell lines, cells were seeded in six-well plates and infected with virus and polybrene on the following day. Positive clones were selected with puromycin for 14 days to establish the stable cell lines. The lentiviruses expressing the GP73 sequence (OE) and the negative control lentivirus (Vector) were also constructed by Hanyin Co. (Shanghai, China). GP73-OE and control stable cell lines were then established in a similar way. The efficiency of GP73 knockdown and overexpression were confirmed by qRT-PCR.

The reagents used were as follows: Annexin V-FITC, Propidium Iodide (BD Biosciences, USA). The cells were digested with 0.25% trypsin without EDTA and washed with PBS. After resuspending the cells, Annexin V-FITC and propidium iodide were added and mixed well. Cells were incubated in dark room for 15 minutes and analyzed by flow cytometry.

Statistical analysis was performed using GraphPad Prism7 software (standard version, California, USA). A two-sided probability value less than 0.05 was considered statistically significant. Unless stated, data are presented as mean ± SD in the figures. A Student t test was performed to compare the data.

The expression of GP73 in HCC cell lines

The correlation between GP73 level and OXA resistance of HCC cells

GP73 and the proliferation of HCC cell

The proliferation of GP73 overexpressed Hep3B cells (Hep3B-GP73-OE) was much higher than that of the parental cell lines (Hep3B). On the fifth day, the proliferation ability difference was statistically significant (p <0.01, Fig 3B). 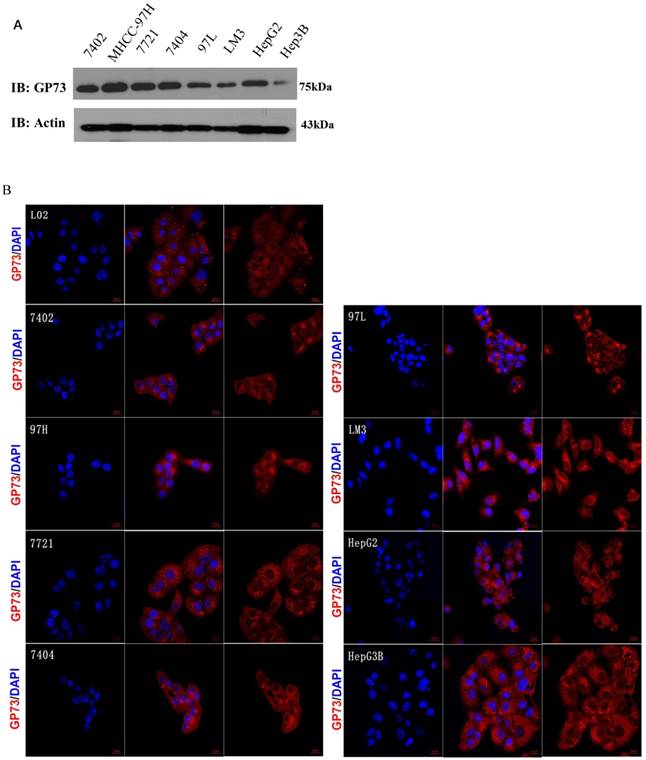 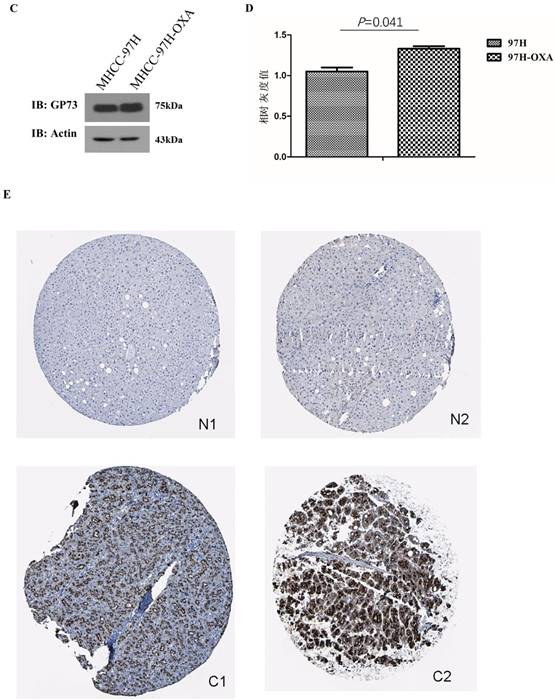 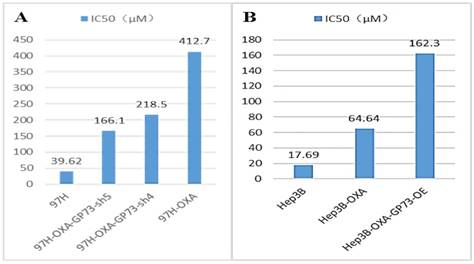 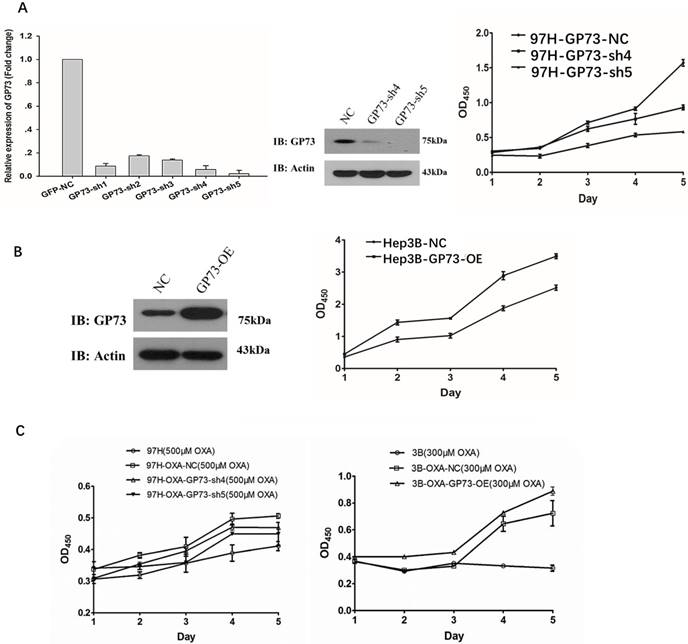 The relationships between GP73 and sCLU

Secretory clusterin (sCLU) is thought to be an inhibitor of apoptosis, which can inhibit the apoptosis of HCC cells by interacting with GRP78 and caspase-9, and it is closely associated with HCC drug resistance to OXA and other chemotherapeutics. We detected sCLU level by Elisa as mentioned in Method section. We found that the manipulation of GP73 (overexpression or knockdown) have no effects on sCLU in both MHCC-97H and Hep3B cell lines. There was no significant difference in the concentration of sCLU secreted by different types of OXA resistant HCC cell lines (Fig 4D).

GP73 is a transmembrane glycoprotein with a molecular weight of 73 kDa. GP73 is high expressed in a variety of tumors, such as in liver cancer, lung adenocarcinoma, prostate cancer and seminoma [12-15]. It is worth noting that in serum and liver tissue of patients with HCC, both virus infected and non-viral caused (alcoholic liver disease and autoimmune hepatitis), GP73 levels were significantly increased [6]. GP73 is considered as a valuable diagnostic marker of liver cancer in recent years. It has been shown that soluble GP73 in serum is derived from the Golgi apparatus. The amino terminus is a hydrophobic end, mainly located in the Golgi apparatus, constituting a transmembrane region and a signal peptide cleavage site. However, the carboxyl terminus is located outside the Golgi apparatus and consists of a continuous sequence of fourteen alkanoyl groups, five glycosylation sites, an acidic domain and a coiled-coil structure. These unique structures are the basis for GP73 to participate in the pathophysiology of intracellular signaling, phosphorylation and dephosphorylation of proteins, and to give full scenario to its biological function [16, 17]. At present, it is known that the carboxyl terminal of G73 is the main functional domain since the truncation of carboxyl terminus of GP73 shortened the survival time of the transgenetic mice and severely damaged the development of the kidney and liver system and the epithelial function [18]. GP73 participates in many physiological processes, such as immune regulation, cell adhesion and cell apoptosis [19]. Therefore, we speculate that the high expression of GP73 has important biological functions in the development and chemotherapeutic resistance of HCC. 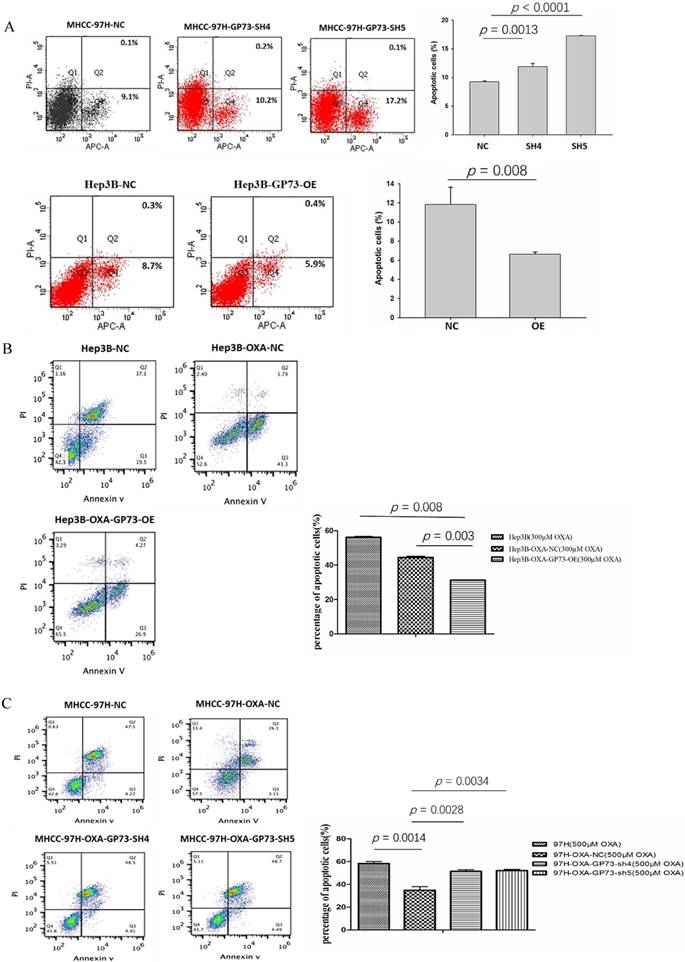 Zhang et al reported that GP73 silence not only inhibited the proliferation of hepatocellular carcinoma cells, but also induced apoptosis [20]. Our study also showed that knock down of GP73 in MHCC-97H cells and over-expression of GP73 in Hep3B cells significantly changed the proliferation and apoptosis of HCC cells. OXA inhibits the proliferation and promote apoptosis of hepatic carcinoma cells [21, 22]. One of the main mechanisms of tumor cell resistance to chemotherapy is cancer cells can resist and escape chemotherapy-induced apoptosis [23]. We successfully constructed the OXA-resistant hepatic carcinoma cells in vitro and found that the expression level of GP73 in MHCC-97H resistant cell line was significantly higher than that in non-resistant cell line, suggesting that GP73 expression level correlated with drug resistance. Knock down of GP73 in MHCC-97H drug-resistance cells decreased its IC50 significantly. GP73 overexpression in Hep3B cells showed opposite phenomenon. In addition, the proliferation and apoptosis of HCC cell lines treated with different concentration of OXA and manipulation of GP73 were detected. The results showed that GP73 positively correlated with proliferative activity in the cell lines and negatively correlated with the apoptosis, indicating that GP73 directly affects the drug sensitivity of OXA. sCLU is considered to be an inhibitor of apoptosis by interacting with GRP78, caspase-9 and other factors [24, 25]. sCLU increase the resistance of HCC cells to chemotherapy by interacting with AKT and Bcl-2 / Bax pathway [25]. In pancreatic cancer, prostate cancer and other tumors, also observed increased sCLU expression, and increased resistance of tumor cells to chemotherapeutic drugs, while blocking the expression of sCLU protein increased the sensitivity of chemotherapy [26, 27]. To analyze the relationship between GP73 and sCLU, we detected the expression of sCLU in OXA resistant HCC cell lines with different GP73 expression levels. We failed to observe any significant change of sCLU levels between groups, suggesting that GP73 might regulate apoptosis in a sCLU independent pathway. However, this study only analyzed the expression level of sCLU protein, the interaction between sCLU and GP73 as well as the functional changes of sCLU needs further studies.

In conclusion, we demonstrated that GP73 is involved in the regulation of cellular proliferation, apoptosis and OXA resistance in HCC cells in vitro. GP73 can be a potential therapeutic target.

4. Qin S, Cheng Y, Liang J. et al. Efficacy and safety of the FOLFOX4 regimen versus doxorubicin in Chinese patients with advanced hepatocellular carcinoma: a subgroup analysis of the EACH study[J]. Oncologist. 2014;19(11):1169-78