MK2 and ETV1 Are Prognostic Factors in Esophageal Adenocarcinomas

Background. Esophageal cancer is ranked in the top ten of diagnosed tumors worldwide. Even though improvements in survival could be noticed over the last years, prognosis remains poor. ETS translocation variant 1 (ETV1) is a member of a family of transcription factors and is phosphorylated by mitogen-activated protein kinase (MAPK)-activated protein kinase 2 (MK2). Aim of this study was to evaluate the prognostic role of MK2 and ETV1 in esophageal cancer.

Methods. Consecutive patients that underwent surgical resection at the department of surgery at the Medical University of Vienna between 1991 and 2012 were included into this study. After microscopic analysis, tissue micro arrays (TMAs) were created and immunohistochemistry was performed with antibodies against MK2 and ETV1.

Discussion. Expression of MK2 and ETV1 are prognostic factors in patients, with esophageal adenocarcinoma.

Even though improvements in diagnosis, surgical techniques and multimodal therapeutically approaches have led to significant improvement, prognosis for patients suffering from EC remain poor [1-3]. Therefore, it is important to investigate other, more effective molecular markers for the treatment of gastroesophageal cancers. The mitogen-activated protein kinase (MAPK)-activated protein kinase 2 (MK2) is an intracellular mediator of stress and is stimulated by signals such as heat-shock and tumor necrosis factor α (TNF-α) mediated by the p38-MAP kinase pathway [4, 5]. MK2 is an important intracellular mediator of stress signals such as inflammation. Due to its role in regulation of cytokines, MK2 emerged as a possible anti-inflammatory target. It's role in carcinogenesis has been examined in a number of malignancies, but no data exists on its role in esophageal cancer until now.

A variety of proteins are phosphorylated by MK2. Previously published data shows, that transcriptional activity (ETV1) can be stimulated by ERK-MAK kinases and ETV1 was identified as target of the protein kinase MK2 [6, 7].

Ets variant gene 1 (ETV1), also known as ER81, is a member of the E-twenty-six (ETS) family, one of the largest families of transcription factors and oncogenes. Beside its physiological functions it plays a major role in cell differentiation, is upregulated in a number of tumors and interact with many factors resulting in oncogenesis [8-11]. ETV1 has been found to cooperate with the p38 pathway and to promote tumor progression and metastasis in a number of human malignancies, upregulating matrix metalloproteinases (MMP) involved in tumor cell migration and invasion [6, 12, 13]. In prostate cancer, upregulation of MMP-7 (matrilysin) for example leads to an oncogenic effect of ETV1 [14, 15]. In melanoma genesis, a deregulation of ETV1 could be observed, implicating the pivotal lineage dependency mediated by ETS transcription factors [16].

This study was approved by the Ethics Committee of the Medical University of Vienna, Austria, and was conducted in accordance with the Declaration of Helsinki Principals. All patients included in this study underwent surgical resection of EC during the period from October 1991 to June 2012 at the Department of Surgery, Medical University of Vienna. All tumors were restaged according to the UICC 7th edition TNM classification. Patients showing complete respond to neoadjuvant therapy (complete responders) and patients with distant metastasis at time of surgery were excluded from this study.

Immunohistochemistry (IHC) was performed on paraffin-embedded specimens fixed in 4% buffered formalin, using 3µm thick histological sections. MK2 expression was detected by using an anti-human MAPKAPK-2 rabbit polyclonal antibody (ab63574 Cambridge, UK) in a dilution of 1:200. ETV1 expression was detected by using a polyclonal rabbit anti-ER81 antibody (ab81086, Abcam, Cambridge, UK) in a dilution of 1:200. This antibody is active against a synthetic peptide, interacting with the C-end of the protein. In case of a gene translocation (hypothysing, that ER81 has a 5' fusion-partner [20]) this antibody is able to detect an overexpression caused by these protein products. Staining was performed on a Benchmark Ultra Immunostainer (Roche Diagnostics, Basel, Switzerland). Immunohistochemistry for MK2 and ETV1 were validated as described previously [17, 18, 21, 22]. Two observers (S.F.S. and M.F.) independently reviewed all slides. Immunostaining scores of MK2 and ETV1 (IHC score 0-300) were calculated as the semi quantitative products of the staining intensity (1 = weak, 2 = moderate or 3 = strong) and the rates of staining were given in percentages of tumor cells showing positive staining (0-100%). Tumors showing expression equal or below the median were considered as low or absent as described previously [23]. Analyzing the specimens, between cytoplasmic and nuclear staining intensity was discriminated. A tumor specimen was considered as positive for the expression of MK2 and ETV1, when >90% of tumor cells showed cytoplasmic staining.

Overall survival (OS) was defined as the time between primary surgery and the patients' death. Death from cause other than gastric, gastroesophageal or esophageal cancer or survival until the end of the observation period was considered as censored observations. Disease free survival (DFS) was defined from the day of primary surgery until the first evidence of disease progression. The significance of differences in survival times were determined with a log-rank test. Uni- and multivariate analyses were performed with Cox proportional hazards models. Correlations between clinicopathological parameters and MK2 expression and ETV1 expression levels were analyzed with the χ2. A two-tailed Mann-Whitney U test was used as appropriate (to determine differences in continuous variables between the groups. i.e. in OS, DFS and age). p-values ≤0.05 were considered as significant. Statistical analysis was performed with the R statistical package [24, 25]. 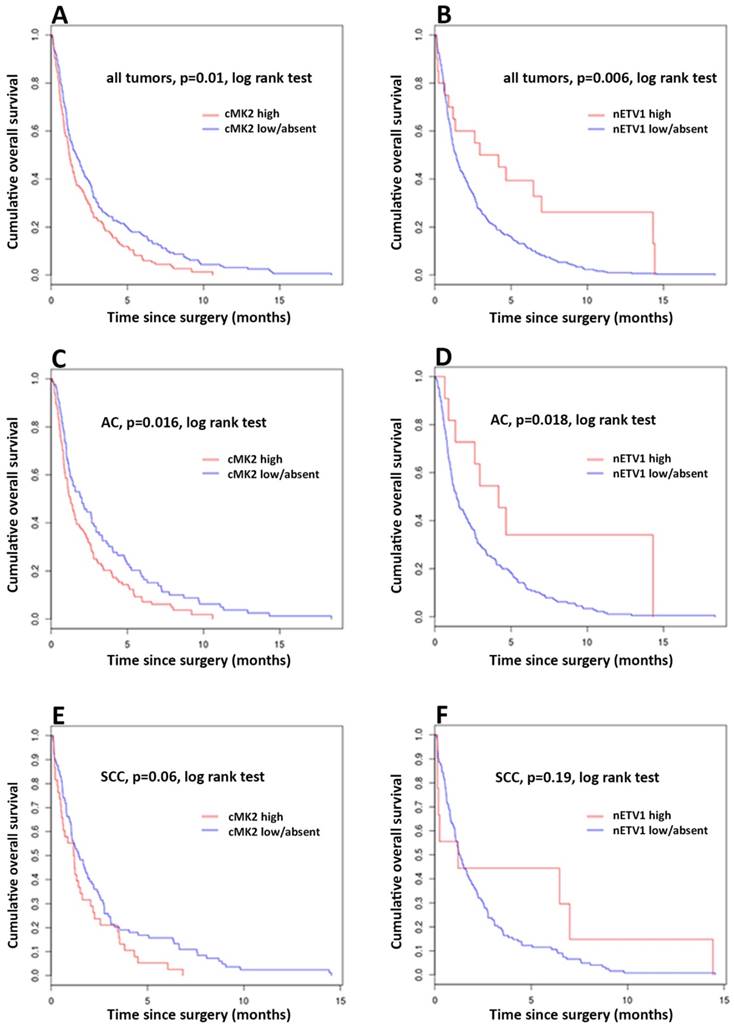 Detailed information on nuclear and cytoplasmic MK2 and ETV1 staining results are shown in Table 2.

Association of cMK2 expression and nETV1 expression with clinicopathologic parameters in patients with esophageal cancer.

The expression status of cMK2, nMK2, cETV1 and nETV1 was also evaluated for association with DFS. No significance regarding DFS could be observed.

No significance regarding DFS could be observed in the subgroup of AC patients.

With p=0.06 for cMK2 and cETV1, respectively, statistical trends, but no statistical significance regarding OS could be observed in the subgroup of SCC (Figure X).

No significance regarding DFS could be observed in the subgroup of SCC patients.

Using the Cox proportional hazards model for multivariable analysis was carried out to assess the prognostic value of cMK2 and nETV1 expression for both OS and DFS (Table 3 and 4). The following prognostic variables were included in the regression model: age, sex, UICC stage, tumor differentiation, resection margin, neoadjuvant- and adjuvant therapy.

No significant correlation of cMK2, nMK2, cETV1 and nETV1 and OS in the groups of all and SCC patients could be found.

No significance regarding DFS could be observed for cMK2, nMK2, cETV1 and nETV1 in the groups of all, AC and SCC patients.

Beside recent improvements in multimodal treatment modalities, prognosis for patients with esophageal cancer remain poor. In this study, IHC was performed to investigate the clinical relevance of MK2 and ETV1 in esophageal cancer patients. We demonstrated that overexpression of cMK2 in AEC is associated with significantly poorer OS and that overexpression of nETV1 in EAC is associated with significantly better OS.

Yamamoto et al. could show an expression of ETV1 in 61% of cases of gastric cancer. Furthermore, ETV1 correlated significantly with patients' survival, tumor staging, lymphnode status und metastasis. The focus of that study was on the connection between the expression of matrix metalloproteinases (MMP7) and ETV4/PEA3, explaining the strong tendency to tumor invasion and metastasis [26].

In this underlying study we found cytoplasmic overexpression of MK2 in 44.0% and nuclear overexpression in 44.3% of all cases. Cytoplasmic and nuclear expression of ETV1 was found in only 9.3% and 6.2% of cases, respectively. Our data go in good accordance with the in-vivo and in-vitro findings from Jahnknecht R., describing MK2 and its suppressive effect on ETV1 [6].

Keld et al. examined the expression of ETV1 in EAC, not discriminating between cytoplasmic and nuclear expression, and found higher expression in EAC samples than in normal tissue and an association with metastatic disease [19].

One of the main reasons for the development of EAC is gastroesophageal reflux disease (GERD). EAC typically develops in intestinal metaplasia (Barretts' disease) caused by constant inflammation due to the washback of stomach content into the esophagus. Based on that constant, local inflammation and later due to inflammatory tumor response, upregulated and overexpressed MK2 might lead to downregulation of ETV1. This hypothesis is supported by our findings, that ETV1 overexpression correlates with a lower tumor stage, is frequently found in high-grade dysplasia and is therefore significantly associated with an increased overall survival.

Investigating the role of ETV1 in ESCC, the recently published study from Yuen et al. found no significantly difference between non-tumor esophageal epithelium and ESCC specimens. Furthermore, Yuen et al. described no overexpression of ETV1 and no positive correlation between ETV1 and clinicopathological parameters in their study [10]. These findings go in good accordance with our data, due to no correlation of cytoplasmic or nuclear ETV1 overexpression and clinical parameters could be observed as well. Furthermore, our data on expression of ETV1 in ESCC support our hypothesis, that the suppressing effect of MK2 on ETV1, based on inflammation is relevant in EAC, but not in ESCC.

The oncogenic potential of ETV1 is proven for a number of malignancies [12, 16, 17, 27]. Based on the data from Keld et al. and Yuen et al. the knowledge about the oncogenic role of ETV1 in esophageal cancer is limited. Even though interactions due to structural similarities with PEA3 and other related ETS family members could be shown, impact on patients and details of biological mechanisms are not fully understood yet. Until now, only few data exist on the clinical role of ETV1 in patients suffering from esophageal cancer.

In this study, multivariate analysis has shown that the overexpression of cMK2 and nETV1 are independent prognostic factors.

The observations of this study underline the importance of further investigations in the field of the ETV family and its role in the MAPKinase pathway as a potential therapeutic onset. 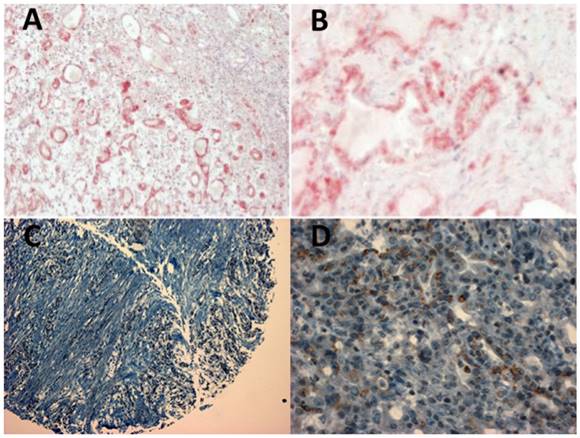