Influence of diabetes on the risk of urothelial cancer according to body mass index: a 10-year nationwide population-based observational study

To examine the association between obesity and urothelial cancer, we used a representative data from the National Health Insurance System (NHIS). Participants included 826,170 men aged 20 years and older who experienced a health examination at least one time between 2004 and 2008. The study thus excluded people aged <20 years and women. We used a multivariate adjusted Cox regression analysis to examine the association between urothelial cancer and body mass index (BMI) via a hazard ratio (HR) and 95% confidence interval (CI).

Being overweight or obese is linked to an increased risk for several chronic diseases, including diabetes, heart disease, and cancer [1, 2]. Recently, multiple epidemiologic studies have suggested that obesity may also increase the incidence and/or mortality of liver, gallbladder, pancreatic and stomach cancers [3-5]. Postulated mechanisms for the increased risk emphasize the systemic inflammation associated with obesity [6, 7]. In addition, Asian populations have a higher body fat percentage for a given body mass index (BMI) compared to Caucasians; accordingly, the consequences of obesity relevant to cancer risk may manifest at lower levels of BMI among Asians [8]. Therefore, Asians' risk of cancer, as associated with being overweight or obese, might differ from Caucasians [9].

Urothelial cancer is the sixth-most commonly diagnosed malignancy in the United States, and the eighth-most common cancer in males in South Korea [10]. Established risk factors for urothelial cancer include cigarette smoking, occupational exposure to specific carcinogens like aromatic amines, drinking tap water with arsenic, and a familial history of bladder cancer [11]. Previous epidemiological studies have reported inconsistent associations between BMI and urothelial cancer [12-14]. Some studies suggest the association between obesity and urothelial cancer may depend on the presence of diabetes [15]. Other studies have reported a heterogeneity in the effects regarding different patient subgroups [16].

These differences might be because of poor representations about study populations or small sample sizes. Therefore, in South Korea, we managed a nationwide, population-based study to determine the relationship between obesity and the development of urothelial cancer. This study spanned the course of 10 years. We examined the association according to the change of BMI category, using nationally representative data from the National Health Insurance System (NHIS).

In South Korea, almost all citizens are registered in the National Health Insurance System (NHIS) as either an employee or a member of a community. As a result, it contains an extensive information about the health problem of most Korean population. It contains eligibility, medical treatment, health examination, and medical care institution databases.

For this study, we developed a customized database. Using NHIS, we generated a sample size of 1,025,340 subjects selected by a systematic sampling method to generate a representative sample from the total Korean population existing in 2004. We retrieved data on sex, birthdate, and diagnostic codes based on the International Classification of Diseases, Tenth Revision, Clinical Modification (ICD-10-CM). Urothelial cancer, including renal pelvic cancer, ureter cancer, and bladder cancer was coded C65, C66, and C67. In addition, subjects diagnosed with urothelial cancer underwent at least one related surgery, such as transurethral resection of bladder tumors, nephroureterectomy, and segmental resection of the ureter.

Of the 826,170 participants who underwent a health examination at least one time from 2004-2008, those aged <20 years or women (n = 351,575) were excluded. In additional to age and sex, the health examination revealed information on diabetes and body mass index (BMI).

Figure 1 shows a flowchart for selecting cases for the study. The Institutional Review Board of The Catholic University of Korea approved this study.

BMI was calculated as weight in kilograms divided by height in square meters. The Korean Society for the Study of Obesity recommends the use of the following BMI ranges: underweight (under 18.5); normal weight (18.5 to 22.9); overweight (23 to 24.9); and obese (over 25) [17]. Blood pressure was measured while the subject was in a seated position after five minutes of rest at daytime. Blood samples were collected after an overnight fasting and measured for serum levels of glucose, total cholesterol, triglycerides, high-density lipoprotein cholesterol, and low-density lipoprotein cholesterol.

Study design and disposition of subjects. 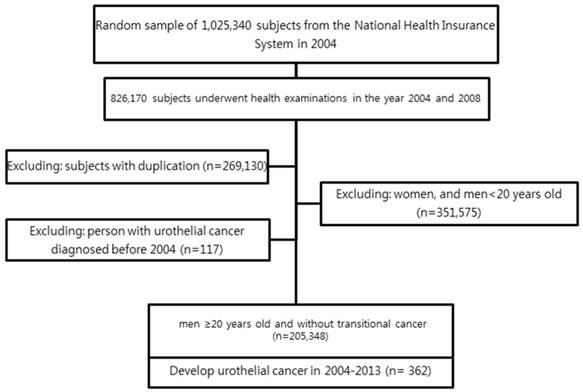 SAS version 9.3 (SAS Institute, Cary, NC, USA) was used for statistical analysis. This study presents data as the mean ± standard error (SE) or proportions for continuous or categorical variables. If necessary, a logarithmic transformation was performed to achieve a normal distribution. Multivariate adjusted Cox regression analysis was conducted to examine the hazard ratio (HR) and 95% confidence interval (CI) for the association between urothelial cancer and BMI, both with and without diabetes. Calculations were made adjusting for age, smoking status, alcohol consumption, and exercise. For each Cox regression analysis, a p-value for linear trend across categories was calculated by introducing the ordinal variable in the model. A p-value < 0.05 was considered statistically significant.

During the follow-up, 362 incident cases of urothelial cancer developed between the beginning of 2004 and end-2013, and the incidence density was 1.76 cases per 1,000 person-years.

Comparison of clinical characteristics according to BMI

Table 1 summarizes the general characteristics of the study population and subgroups. Among a total of 205,348 participants, 73,390 (35.74%) were normal weight and 72,152 (35.14%) were in the obesity group. Mean total cholesterol and the proportion of dyslipidemia were significantly higher in the obesity group. The presence of hypertension or diabetes increased with increasing BMI.

Hazard ratios for urothelial cancer according to BMI

Table 2 shows a regression analyses for urothelial cancer development, adjusted for variables, including age, smoking status, alcohol consumption, and exercise. Being elderly (over 65 years old), currently smoking, and presently diabetic were remarkable risk factors in both of the age-adjusted and multivariable-adjusted models. Data on alcohol consumption, the presence of hypertension, hyperlipidemia, and exercise did not create a statistically significant, increasing trend in risk of urothelial cancer.

Comparison of clinical characteristics according to the body mass index

1All rates are expressed as number per 1000 person-years.

Table 4 shows an association between urothelial cancer and increasing BMI according to the presence of diabetes. The data shows that as the BMI increased, the HR of bladder cancer became more vulnerable. In the same BMI range, categories of diabetes impacted the HR (p<0.05). There was a marked, increasing risk for urothelial cancer in the overweight and obesity group compared to the group with the same BMI without diabetes.

Association between urothelial cancer and increasing BMI according to the presence of diabetes.

The main findings of this population-based study are as follows: (1) men with a higher BMI were more likely to develop urothelial cancer independent of confounding variables; (2) this positive association between urothelial cancer and BMI is differentiated by the existence of diabetes; and (3) in the population with diabetes, there showed a marked, increasing risk for urothelial cancer in the overweight and obesity groups, compared to the group with the same BMI without diabetes.

Inflammation and insulin resistance can partly explain the underlying biological mechanism contributing to the epidemiologically positive association between obesity and urothelial cancer. That is, excessive adipose tissue can increase adipocytokines, which can play a major role for insulin resistance and systemic inflammation [18]. Hyperinsulinemia increases the promotion and activity of Insulin-like Growth Factor 1 (IGF-1), which in turn drives the imbalance of cell proliferation, apoptosis, and angiogenesis, therefore playing a role in the development of urothelial cancer [19].

Several epidemiological studies have reported inconsistent associations between obesity and urothelial cancer. A recent meta-analysis from 16 cohort studies suggested a linear relationship between BMI and risk of urothelial cancer [20]. However, the relation between BMI and the percentage of body fat depends on age and sex, and differs across ethnic groups [8].

The other distinctive feature of this study is its use of Korea's NHIS database, which provides a highly representative cohort of the Korean population. The NHIS contains a large sample size and detailed information, such as physical, laboratory, and habitual covariates, like smoking status. A properly-designed NHIS service, like a biennial urine analysis, can serve as a major advantage for urothelial cancer research in Korea.

A possible limitation with this study is for covariates to be misclassified or confounding. For instance, smoking status has been known to be risk factor for urothelial cancer. However, smoking status is self-reported, which means it could have been misclassified to some extent and is probably confounding by the amount smoked. Other habitual covariates that were self-reported included alcohol status and exercise, which are likely to be similarly confounding.

This work was supported by the National Research Foundation of Korea (NRF) grant funded by the Korea government. (No. NRF-2015R1C1A1A01051802).