FOXG1, a member of forkhead family transcriptional factor, is involved in telencephalon development. Recent studies showed FOXG1 was important for a variety of cellular events in cancer cells. In respect to glioma, FOXG1 has been shown to regulate cell proliferation and cell cycles. However, its impacts on other cellular events were not well studied. Here, we found FOXG1 had high expression in clinical glioma tissues, and its expression positively correlated with glioma malignancy. Moreover, we found FOXG1 played roles in glioma cell apoptosis. The expressions of caspase family members were significantly altered in response to change of FOXG1 expression, indicating a direct regulation of FOXG1 on caspase family members. These data strongly suggest FOXG1 is negative regulator of glioma cell apoptosis.

Gliomas, the most common type of brain tumors, are characterized by prominent proliferation and aggressive infiltration [1]. Although surgical resection followed by combined radiotherapy and chemotherapy were extensively applied in glioma treatment, the median survival time of glioma patients were less than 16 months [2]. Therefore, it is imperative to understand the molecular mechanism of gliomagenesis and to discover new drug target.

FOXG1 belongs to the forkhead family of transcriptional regulators [3, 4]. Previous studies on FOXG1 functions were mostly focused on telencephalon development, which showed FOXG1 was a key regulator in both neural progenitor cell differentiation and regional patterning of mammalian forebrain [3, 5, 6]. Recently, some pilot researches also suggested that FOXG1 regulated tumorigenesis. In ovarian cancer, medulloblastoma (MB), glioblastoma (GBM) and neuroepithelium, FOXG1 was shown to be up-regulated and involved in cell proliferation and cell cycles [7-10]. In breast cancer, FOXG1 was shown to have low expression, which was correlated with the poor prognosis [11]. Therefore, FOXG1 could be either a pro- or anti-oncogenic factor in different cancers. In regarding to glioma, FOXG1 was reported to be involved in GBM tumorigenesis via regulating the expressions of cell cycle-related genes [12]. In addition, microarray screening showed FOXG1 may regulate cell apoptosis pathways [13]. However, its roles in glioma cell apoptosis and the underlying mechanisms were still unclear.

The U87MG, SHG44 glioblastoma cells and HEK293T cell lines were cultured according to ATCC (American Type Culture Collection) guidelines. All cells were grown in DMEM (Sigma) supplemented with 10% FBS and 1% penicillin and streptomycin in a humidified atmosphere of 5% CO2 at 37°C.

All clinical samples were obtained from the First Clinical Hospital of Jilin University (Changchun, China). Fresh tumor tissues (n=15, No. 1-15, Table S1) and adjacent normal tissues were immediately frozen at -80°C after surgery. The formalin-fixed paraffin-embedded primary glioma samples (n=43, No. 16-58, Table S1) were classified into different grades according to clinical criteria. The informed consents were obtained from all patients while they were staying in hospital. Permissions were obtained from The Regional Ethical Review Board of Jilin University and Northeast Normal University Changchun, China. All experiments were conducted in accordance with approved guidelines, including any relevant details.

All statistical analyses were performed using SPSS 17.0 software. The statistical significance between two groups was determined by Mann-Whitney U test. For CCK8 analysis, the experimental group was compared to the control group at the same time point using Mann-Whitney U test. Kaplan-Meier curve models was applied to analyze the associations between FOXG1 expression and tumor latency. The patients were divided into two groups by the median value of FOXG1 expression. All FOXG1 IOD values were listed in Table S1. All the graphics were performed using GraphPad Prism 5.0. P < 0.05 was considered to be statistically significant.

FOXG1 has well-studied roles in neurogenesis and tumor growth [4, 7, 18]. FOXG1 was shown to have high expression in MB or GBM, which was important for tumorigensis [8, 10, 12]. However, the expression of FOXG1 in low grade gliomas and the difference in FOXG1 expression between glioma and its adjacent normal tissues were not well characterized. To explore this, we collected 15 paired primary glioma samples and measured FOXG1 expression by western blotting (figure 1A). FOXG1 expression was found to be elevated in 62.5% (10/16) of glioma tissues compared with each adjacent normal tissue. The overexpression rates ranged from 2 to several hundred folds (figure 1B). To confirm this observation, we further examined FOXG1 expression using real-time PCR analysis. A general of 4-fold up-regulation was detected for FOXG1 in glioma tissues (figure 1C). Immunohistochemistry (IHC) on paired human samples also showed that positive staining of FOXG1 was dramatically increased in glioma samples, and the straining sites were all at the nuclei (figure 1D). These data suggested that the expression of FOXG1 was elevated in clinical glioma samples.

To further study the impact of FOXG1 expression on gliomas, 43 paraffin embedded glioma specimens were collected and applied to IHC (Table S1). Results demonstrated that positive FOXG1 staining was seen in all specimens, and the intensity of FOXG1 staining gradually increased form Grade I to Grade IV (figure 1E, F). There was a significant difference between the expression of FOXG1 in low (I and II) grade and high (III and IV) grade gliomas (figure 1G). Previous reports regarding FOXG1 overexpression were mostly from GBM but not low grade gliomas. Our data showed FOXG1 ubiquitously expressed in all gliomas and its expression level was related to glioma grade. We then constructed the receiver operating characteristics (ROC) curves and calculated the areas under the ROC curve (AUC) [19-21] to assess whether FOXG1 could be a diagnostic marker for glioma. Results showed FOXG1 could be used to distinguish low-grade glioma and high-grade glioma (figure 1H). We also conducted correlation analyses between FOXG1 expression and several known glioma parameters, including ki-67, length of being in hospital, gender. However, negative results were found for all correlation analyses (Table S2), indicating that FOXG1 is independent from such parameters. Nevertheless, the Kaplan-Meier curve [11] analysis showed that patients with higher FOXG1 expression had shorter tumor latency (figure 1I), indicating a faster progress of gliomas. Taken together, these results indicated that FOXG1 correlated with glioma grade in clinic samples and may play a role in gliomagenensis.

To investigate FOXG1's function in gliomas, we firstly examined FOXG1 expression in two cultured glioma cell lines and found FOXG1 had a higher expression in U87MG cells than SHG44 cells (figure S1A and figure 2A). Therefore, two lentivirus-mediated shRNA and a shCtrl were constructed and infected into U87MG cells. The gene knock down efficiency was assessed by western blotting and qPCR (figure 2B and figure S1B). Then, CCK8 assays were used to measure cell proliferation in FOXG1 knockdown U87MG cells. As expected, both shRNA treated cells had lower proliferation ability than the shCtrl cells (figure 2C). Then, we also constructed a lentivirus mediated expression system to overexpress FOXG1 in SHG44 cells, and the GFP sequence was removed to facilitate the following analyses (figure 2D). Cell proliferation was assessed by both CCK8 (figure 2E) and CFSE assays (figure S1C, D). Both results showed FOXG1 overexpression led to higher proliferation rate. Since FOXG1 is a well-known transcriptional regulator, we thus detected whether FOXG1 regulated the expression of key cell proliferation molecules, such as AKT, ERK1/2 and c-Myc. However, no obvious change was detected of these genes in FOXG1 overexpressing or silencing cells (figure 2F, G).

FOXG1 expression elevated in gliomas. (A) Western blotting analyses of paired clinical glioma samples showed that FOXG1 expression was higher in glioma tissues (T) than the adjacent normal tissues (S). GAPDH was used as an internal control. (B) Quantitative analyses of western blotting result using Gel-Pro Analyzer 4 software. (C) Real-time PCR analysis of FOXG1 mRNA levels. (D) Representative images of IHC results. FOXG1 expression was higher in glioma tissues compared with the paired adjacent normal tissues. Boxed areas in the left panel were magnified and shown in the right panel. Scale bar=50 μm. (E) Representative images of IHC showed that FOXG1 expression was gradually increased in glioma samples form Grade I to Grade IV. Boxed areas in the upper panel were magnified and shown in the lower panel. Scale bar = 50 μm. (F) Quantitative analysis of the mean integrated optical density (IOD) of FOXG1 staining using Image-Pro Plus software. (G) IOD of FOXG1 staining in low grade and high grade glioma samples. (H) The receiver operating characteristic (ROC) curves for FOXG1 were constructed to identify whether FOXG1 expression could act as a diagnostic marker. The area under the ROC curve (AUC) is 0.869, indicated that FOXG1 expression could be a diagnostic marker. (I) Kaplan-Meier curves were constructed according to relative FOXG1 expression levels and tumor latency. High FOXG1 patients are marked in red, low FOXG1 patients are marked in black. All data were shown as mean ± SEM. For all statistics analyses in this figure, n.s, p>0.05, *: P < 0.05; **: P < 0.01; ***: P < 0.001. 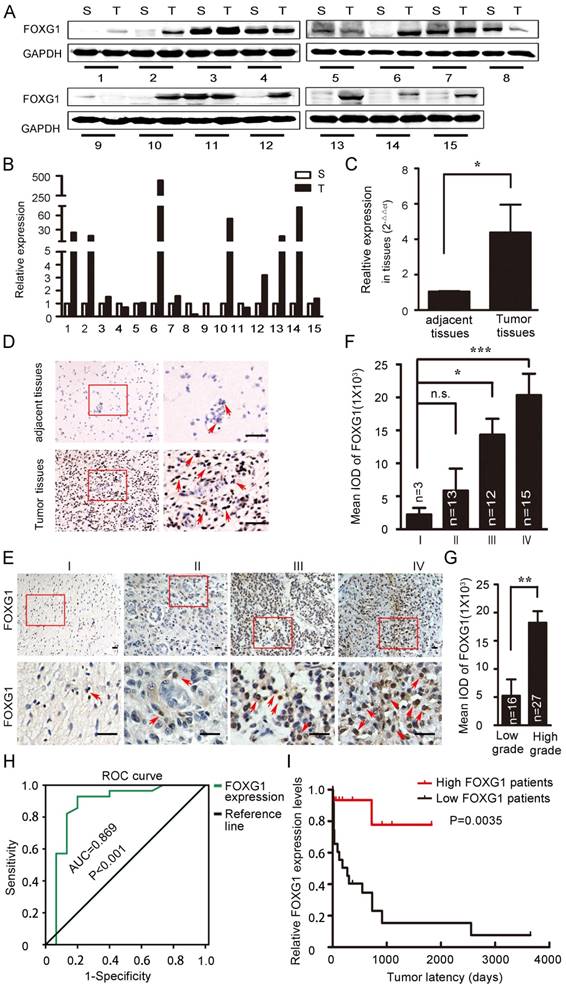 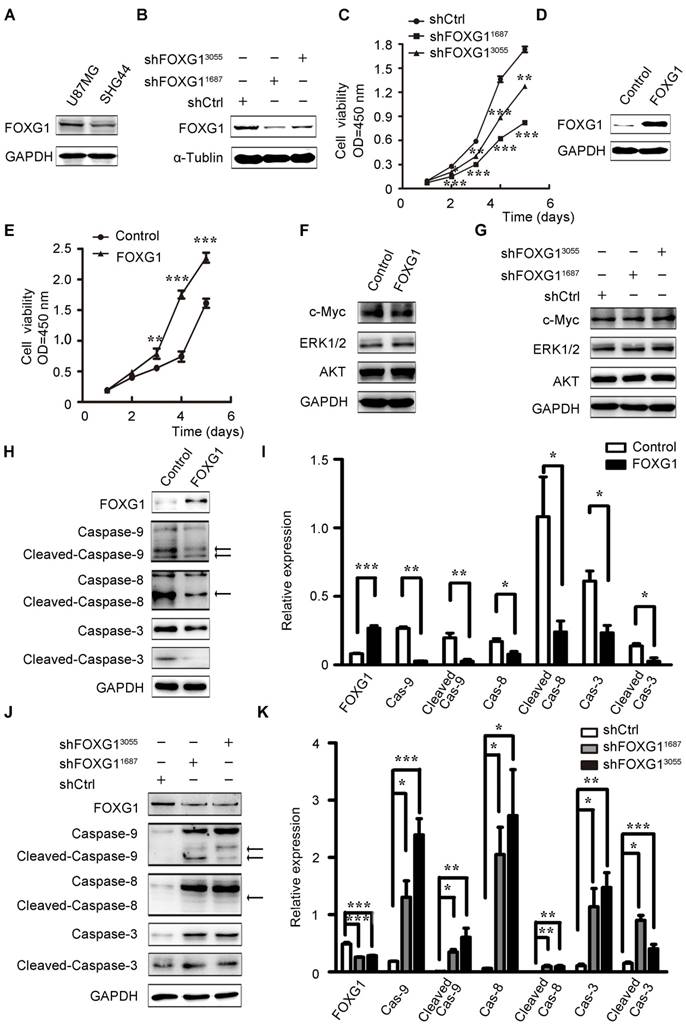 In conclusion, our findings identified that FOXG1 may play important roles in glioma cell proliferation through regulating cell apoptosis. Moreover, we found FOXG1 could regulate the expression of caspase family members. These results suggested FOXG1 could be a potential target for glioma treatment.

The authors declare no conflicts of interest.