Conclusion Paxillin was significantly upregulated in PCa compared with BPH and normal tissues and associated with lymph node metastasis and shortened BFS of PCa. Further study will investigate the underlying molecular mechanism and the role of Paxillin in PCa.

Prostate cancer (PCa) is one of the most commonly diagnosed malignancies in men and is ranked the second most diagnosed male malignancy worldwide.[1] Although the majority of PCas progress slowly, it resulted in more than a quarter million cancer-related deaths globally in 2008[2]. The risk factors for PCa include older age, African ethnicity and a family history of the disease. Indeed, approximately 62% of all PCa cases in the United States are diagnosed in men aged 65 years and older.[2] Prostate cancer treatment includes surgery, radiation therapy, hormone therapy, chemotherapy and targeted therapy; treatment selection is dependent on staging and identifying histological subtypes.[3] Radical prostatectomy is one of the most effective PCa therapies; however, whether pelvic lymph node dissection (PLND) confers clinical advantage is contentious,[4] as most studies have indicated that PLND is only necessary for moderate- and high-risk PCa patients.[5-7] Like most other cancers, PCa lymph node metastasis can lead to mortality; thus, the development of biomarkers to predict tumor metastasis prior to surgery will aid oncologists in making optimal clinical decisions and treatment plans.[8, 9]

Tumor metastasis is a complex process in which cancer cells become capable of leaving the primary tumor site via the lymphatic system and/or the bloodstream and then establish a secondary tumor site in other parts of the body.[10] Paxillin is a scaffold protein composed of five N-terminal LD motifs, four C-terminal LIM domains and several SH3 domains, which allow Paxillin to form a large number of protein-protein interactions.[11] Paxillin regulates cell-cell adhesion by binding to a variety of adhesion molecules, such as integrins and actin to induce tumor cytoskeletal remodeling that leads to adhesion and migration.[12] In PCa, a previous study demonstrated that Paxillin could promote PCa cell migration and invasion, while another study showed that Paxillin was an important factor in mediating PCa bone metastasis.[13, 14]

Sections were de-waxed, rehydrated, and then antigen retrieval was performed using 0.1 M citric acid buffer (pH 5.0; Fuzhou Maixin Biotech. Co., Ltd., Fuzhou, China) in a high-pressure cooker. Following antigen retrieval, tissue microarrays were incubated with 3% H2O2 for 10 min to block endogenous peroxidase activity and subsequently with 20% normal goat serum at room temperature for 30 min. Next, the tissue microarray sections were incubated with a rabbit monoclonal anti-Paxillin antibody (Abcam, Cambridge, UK) at a dilution of 1:800 at 4°C overnight. The following day, the sections were briefly washed with phosphate buffered saline (PBS) three times and further incubated with secondary antibody (DAKO, Santa Clara, CA, USA) at 37°C for 30 min and subsequently with ChemMate™ EnVision™ Detection Kit (DAKO). The sections were subjected to color reaction with 3,3´-diaminobenzidine (DAB) solution, briefly counterstained with hematoxylin and mounted with a coverslip. Confirmed positive sections were used as positive controls, and PBS in place of primary antibody was used as a negative control. The immunostained tissue microarray sections were reviewed and scored under a light microscope (Olympus, Tokyo, Japan) by two blinded pathologists. Any discrepancies were resolved by re-reviewing the sections. Two semi-quantitative methods were conducted, and the total Paxillin immunostaining score included staining intensity and the proportion of positive cells. Staining intensity (I) was recorded as 0, absent; 1, weak; 2, moderate; 3, strong, while the proportion (P) of positive cells was recorded as 0, <5%); 1, 5%-25%; 2, 26%-50%; 3, 51%-75% and 4, >75%. A score for each histological grade (H-score) was determined as: H-score = Ʃ (I × P), as described previously. [18, 19] The final Paxillin expression score (E-score) was calculated using the value of the percentage positivity score multiplied by the staining intensity score, which ranged from 0 to 9. Paxillin expression level was defined as "-" (scores 0-1), "+" (scores 2-3), "++" (scores 4-5) and "+++" (scores ≥6).[20] 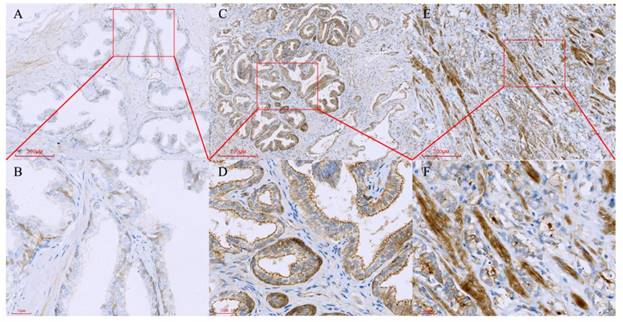 Expression of Paxillin in Normal, BPH and Prostate Cancer tissue

Association of Paxillin Expression with Clinicopathological Features of Prostate Cancer. 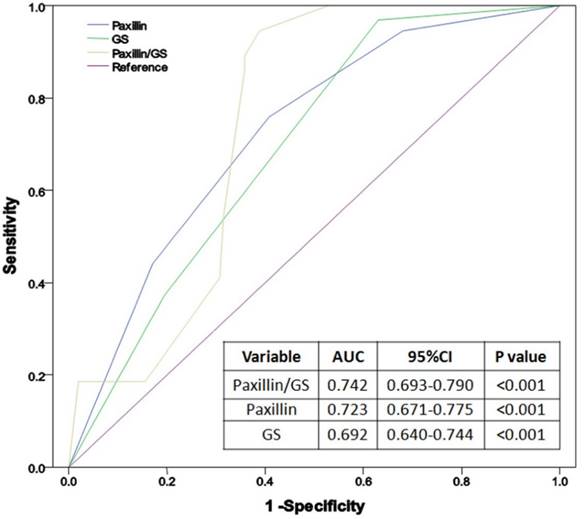 Prostate cancer is the most common malignancy in men and a major cause of cancer-associated death.[1] In some moderate/high-risk cases, there is no disease progression for a long period of time, whereas lymph node and bone metastasis may occur in certain low-risk cases at early stages.[7, 22] To date, the application of PLND to all PCa patients remains controversial, and previous studies have suggested that PLND may only help clinicians accurately evaluate tumor staging and improve patient prognosis to a certain extent.[23, 24] However, other studies have concluded that PLND does not affect the prognosis of PCa patients with postoperatively confirmed pTxN0 stages, even if the patients had a relatively high PSA level, pathological grade, or capsule invasion before surgery.[25, 26] Moreover, PLND may also result in complications, such as deep vein thrombosis of the lower limbs, lymphedema and pelvic infection, in particular in patients treated with extensive PLND.[27] Thus, some surgeons suggest that low-risk PCa does not require PLND and that standard or extended PLND should only be performed in moderate- and high-risk cases.[28, 29] In our study, 335 patients received standard PLND, with a resection range including obturator formamen and external iliac vein peripheral lymph nodes, while 51 patients received extended PLND with peripheral lymph node fat tissue having an upper bound to the common iliac artery bifurcation, a lower bound to the femoral canal, both sides to the pelvic wall and a back bound to the obturator nerves, blood vessels and anterior internal vein.[15] Currently, there is a lack of a standardized protocol or specific tumor markers to evaluate or predict the risk of PCa metastasis to pelvic lymph nodes.

Paxillin is a multifunctional and multi-domain focal adhesion adapter protein that serves an important scaffolding role at focal adhesions, recruiting structural and signaling molecules that are involved in cell motility and migration. As a major participant in the regulation of cell movement, Paxillin plays distinct roles in cancer development and metastasis. [30] Sen et al.[13] demonstrated that Paxillin promoted PCa cell migration and invasion, while Bokobza et al. showed that Paxillin was an important factor that mediates PCa bone metastasis. [14]

Clinically, PCa mainly metastasizes to the pelvic lymph nodes, contributing to an unfavorable prognosis for PCa patients.[37] Previous studies have shown that Paxillin expression was associated with lymph node metastasis in lung and colon cancer.[11, 38] In this study, we demonstrated that Paxillin expression and other clinicopathological factors, such as raised PSA level, Gleason score, tumor grade, positive surgery margin, extracapsular extension and seminal vesicle invasion, were associated with PCa metastasis to the pelvic lymph nodes. Thus, we speculate that PCa metastasis is a multi-factoral-induced phenomenon, and further studies are needed to elucidate the underlying molecular mechanisms that can be targeted to effectively control disease progression and provide a means to evaluate and predict PCa metastasis.

This study had some limitations. For example, we could have analyzed the number of tumor-positive lymph nodes versus total numbers of lymph nodes in this study, which may have led to a more accurate determination of the association between Paxillin expression and lymph node metastasis. We did not carry this out, as the surgeons who performed PLND might not have had consistent techniques, leading to inconsistencies in the extent of lymph node dissection. Moreover, some patients received a standard PLND, while others received extended PLND. In addition, this study was retrospective and not well controlled. In conclusion, our data demonstrated that upregulated Paxillin expression was associated with PCa malignant behaviors, lymph node metastasis and shortened biochemical-free survival.

All procedures performed in studies involving human participants were in accordance with the ethical standards of the First Affiliated Hospital of Fujian Medical University and with the 1964 Helsinki declaration and its later amendments or comparable ethical standards.

Informed consent was obtained from all individual participants included in the study.