Objective: The main aim of this study was to study swith of the ovarian cancer cell to a calcifying phenotype in the formation of calcification in ovarian cancer, and to offer some help for ovarian cancer's diagnosis and differentiation therapy.

Results: Classical calcium salt detection methods confirmed that the culture of SKOV3 cells in calcification medium was an appropriate ovarian cancer calcification model in vitro. Transmission electron microscopy and western blot revealed respectively the presence of cells with morphological characteristics of osteoblasts and the upregulation of mineralization biomarkers expression in treatment group. Transwell assay and scratch wound showed the decreased SKOV3 cell migration in treatment group. In specimens, the calcification occurred predominantly in well-differentiated carcinomas and the expression of the BMP2 and OPN elevated in calcified group.

According to the findings above, we can hypothesize that ovarian cancer cells switch to calcifying cells in certain conditions and lead to the local calcium deposition. Therefore, the main aim of this study was to investigate the formation of calcification in ovarian cancer, and to offer some help for ovarian cancer's diagnosis and therapy.

Assessment of mineralization in vitro

Cells was cultured in medium containing 5 ug/ml calcein (day 18) for 3d. After the medium was removed, SKOV3 cells were rinsed with PBS and fixed with 95% ethanol for 15 min. Then fluorescent images were collected by using an inverted epifluorescence microscope (IX70; Olympus.Co., Tokyo, Japan)

Cell culture medium was used for the ALP assay. Samples (50 ml) and p-nitrophenyl phosphate (100 ml) were incubated at 37°C for 30 min and absorbance was measured at 520 nm.

At the 21d, the cells were synchronized at serum-free conditions overnight. Then a uniform scratch was performed using a plastic cell scrapper and the plates were rinsed with PBS and replenished with fresh serum-free medium. Images of the wounds were randomly chosen at 0h and photographed consecutively at 12h and 24h. Also, the scratch area and the wound healing percentage was analysed consecutively at 0h, 12h and 24h. Three parallel experiments were done and data were presented as Mean±SD.

After cultured for 21d, the SKOV3 cells with density of 2×106 cell/cm2 were cultured in Transwell chamber (8μm pore size; BD FalconTM, USA) for 24h at 37°C and 5% CO2. After culturing, the inner chamber was cleaned, and the migrated cells on the bottom of the chamber was fixed and stained with 0.1% crystal violet. Each step was followed by washing with PBS for 5min three times. The migrated cells were photographed at different fields of view using an inverted phase contrast microscope (CK2, Olympus, Japan). Also, the cell numbers of each group were calculated from images in triplicates.

All calcified ovarian cancer specimens (n = 40) and matched non-calcified ovarian cancer tissues (n = 40) were obtained from patients who underwent surgical treatment at the department of gynecology, Sichuan Provincial Cancer Hospital (Chengdu, China). Patients were diagnosed as serous ovarian cancer pathologically, and none of them received any other treatments prior to the harvest of the specimens. Written informed consents were obtained from all patients, and the study was approved by Sichuan University ethics committee.

The ovarian cancer were sectioned, and the portions were fixed in 10% neutral buffered formalin, dehydrated, embedded in paraffin, sectioned at 5μm, and stained with hematoxylin-eosin (H&E).

The expression of Collagen I, Runx2, beta2-microglobulin, BMP2, Osterix and OPN was investigated using immunohistochemisty (IHC) on formalin fixed, paraffin embedded sections by using the DAB kit (ZSGB-bIO, China). After pretreatment, sections were incubated with anti-Collagen I (ab90395, abcam, UK) , anti-Osterix (ab22552, abcam, UK), anti-OPN (sc-21742, santa, USA), anti-BMP-2/4 (sc-137087, santa, USA), anti-β2-microglobulin (D8P1H, CST, USA)and anti-Runx2(D1L7F, CST, USA) .All the primary antibodies were at the 1:200 dilutions. Tissue sections were deparaffinized and rehydrated by passing the slides through xylene (3 washes, 10 minutes per wash) and graded alcohols (2 washes at 99.5% ethanol, 2 washes at 95% ethanol, 1 wash at 75% ethanol and 1 wash at 70% ethanol) for five minute each then placed and rinsed in water. The slides were incubated for 15 min with 0.6% hydrogen peroxide solution to block endogenous peroxidase activity. Slides were rinsed again and then underwent antigen retrieval. For heat-mediated antigen retrieval, slides were immersed in 0.1 M citrate buffer pH 6.0 and heated for 20 min at 95°C -99°C. Slides naturally cooled to room temperature and then rinsed in phosphate buffered solution (PBS). Then attached one hundred microlitres of Protein Block was added to each slide for 30 min to prevent non-specific binding to any other reactive sites within the tissue. Then the slides were incubated with 40 μL of the primary antibody at 4ºC overnight. Following overnight incubation, slides were washed with 0.05% PBS 3 times per 5 min. Then the slides were incubated with 40 μL of the second antibody. After another wash, the slides were developed with the addition of 40 μL 1:20-diaminobenzidine (DAB) solution followed by counterstaining by haematoxylin. Slides were then dehydrated in ascending graded alcohols (1 wash at 70% ethanol, 1 wash at 75% ethanol, 2 washes at 95% ethanol and 2 washes at 99.5%; ethanol) for five minute each and cleared in 3 changes of xylene for three minute each. Finally, the sections were mounted using neutral gum and covered with a glass coverslip. Sections of appendix tissue with acute appendicitis were used as a positive control in each run of staining. For negative controls, slides were incubated with 40 μL antibody diluent instead of primary antibody.

Transmission electron microscopy study revealed the presence of cells with ultrastructure characteristics of osteoblasts in treatment group (Figure 2). For SKOV3 cells cultured with calcification medium, compared with the control group, glycogen and fat particles loss seriously, metabolism slowed and intercellular junction was sparse (Figure 2B). The cytoplasm of calcifying SKOV3 cells were rich in vesicles containing electron-dense granules similar to the intracellular vesicle of the osteoblasts and these intracellular vesicles were secreted outside cells (Figure 2C). 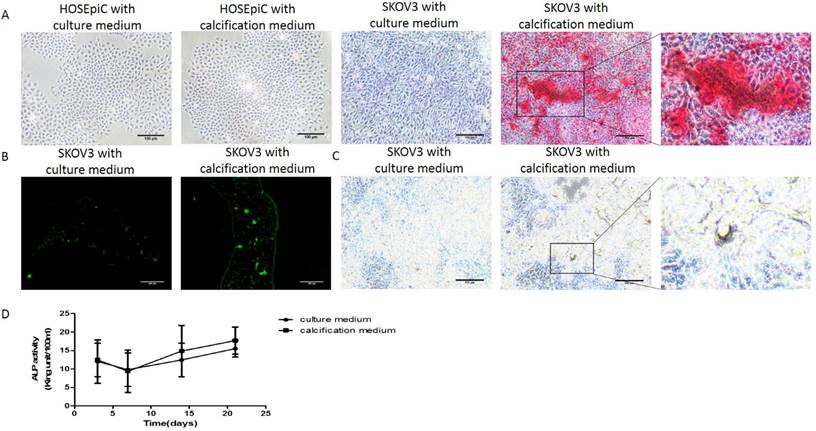 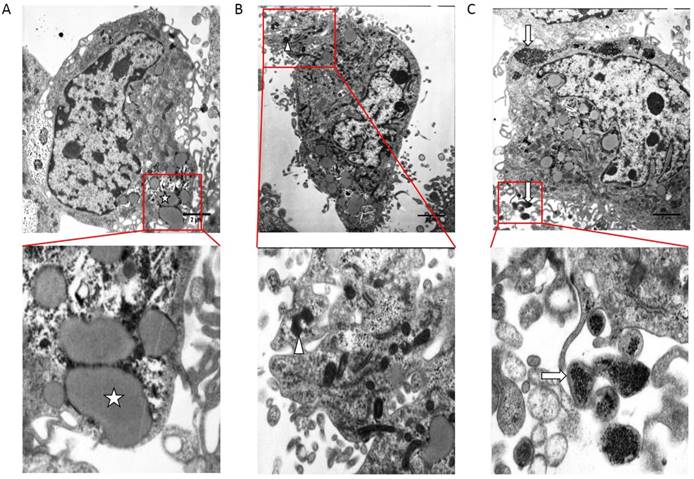 Characteristic of the specimens.

First, calcification medium (50 μg/ml vitamin C, 10mM beta glycerin sodium phosphate + 10-7 M dexamethasone+10%FBS) was used to establish an in vitro model of ovarian cancer calcification. Among them, the addition of exogenous phosphate is routine in mineralization studies of many pathologies, including osteoblasts, vascular smooth muscle cells and tumor cells in vitro[10], because the phosphate can participate in the formation of calcification such as hydroxyapatite. Dexamethasone, a synthetic glucocorticoid, can enhance the mineralization of certain bone-like cells[11]. Vitamin C, an essential co-factor for extracellular matrix synthesis in culture, since it is required for collagen synthesis, it has a marked effect on mineralization in vitro[12]. 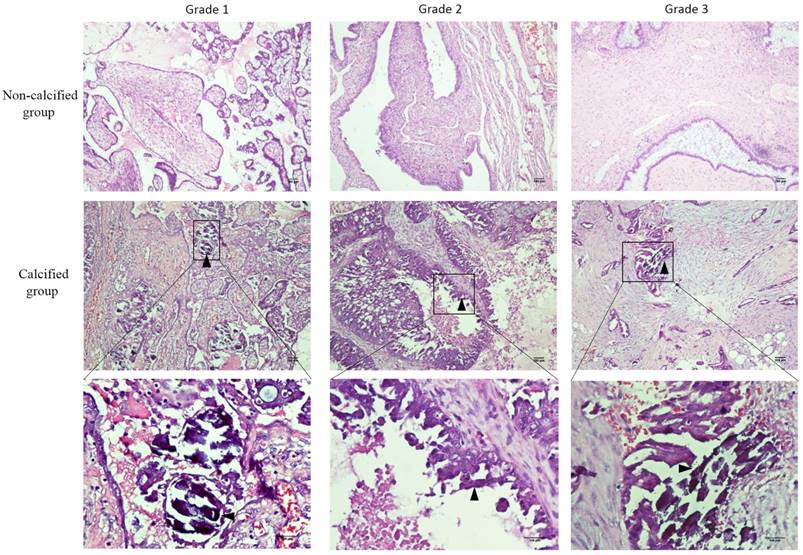 Second, we used the established in vitro model of ovarian cancer calcification to investigate the changes of ultrastructure and the mineralization biomarkers after the induction of calcification medium. Under transmission electron microscope (TEM), terminal differentiation occurred in SKOV3 cells cultured with calcification medium, which was similar to the osteoblast phenotype. What's more, the expression of mineralization biomarkers (CollagenⅠ, Runx2, β2-microglobulin, BMP2, Osterix and OPN) was elevated in calcifying SKOV3 cells, which suggested that calcifying SKOV3 cells may maintain an calcifying phenotype. From above, the in vitro study fully demonstrated that after cultured under calcification medium, ovarian cancer cells already obtained osteoblast-like characteristics.

Our study of specimens also demonstrated that mineralization biomarkers BMP2, OPN, Runx2 and Osterix were present more in the calcified serous ovarian carcinomas, and there was statistically significant difference of the expression of the BMP2 and OPN between calcified group and non-calcified group (P < 0.05). These results imply a possible link between BMP2, OPN, Runx2, Osterix and calcified serous ovarian carcinomas. As a typical member of the BMP family, BMP2 has obvious osteoinductive activities, such as directly enhancing cell calcification and inducing new bone formation[13]. BMP2 modulates osteogenesis via the BMP2 pathway. Through the BMP/Smad pathways[14], signals from the pathways are transmitted to regulate the synthesis of osteogenic factors including OPN. The transcription factors such as Runx2 and Osterix can control downstream target genes including OPN to play an important role in the differentiation and maturation of osteoblasts and to regulate the osteoblast proliferation[15]. Osterix is generally thought to exist downstream of Runx2, and Runx2 plays a role in early osteogenic differentiation, and Osterix plays a role in the late stage of osteogenic differentiation[16]. The predominant occurrence of these mineralization biomarkers in the calcified serous ovarian carcinomas demonstrates an osteogenesis process in the calcified serous ovarian carcinomas. However, regarding the small amount of our study of specimens, the results should be explained with great caution, and more large-scale studies are needed.

It is important to note that EMT and MET is a balance process. EMT and MET may determine active or dormant states of the tumor, respectively, and allow for an indeterminate number of cycles of invasion and metastases formation[22]. MET, reverting the mesenchymal cells back to epithelial cells, may reduce the EMT-associated malignancy [24]. Additionally, although MET is the driving force of metastatic colonization, tumors that have undergone a MET at a secondary site may be less invasive and more susceptible to chemotherapeutic drugs [25]. If we could interfere the EMT and MET process in the ovarian osteogenic phenotype transformation to reduce EMT and promote MET, we can promote the terminal differentiation of tumor cells in the primary site and inhibit the spread of ovarian cancer cells. Thus, experimental studies will be needed to settle the key question whether inducing or inhibiting MET would be beneficial in the treatment of ovarian cancer. Further, making clear the pathways that contribute the MET in the ovarian osteogenic phenotype transformation is also important. Understanding the precise mechanisms of EMT and MET in the ovarian osteogenic phenotype transformation can inform the new prospective in ovarian cancer therapy. 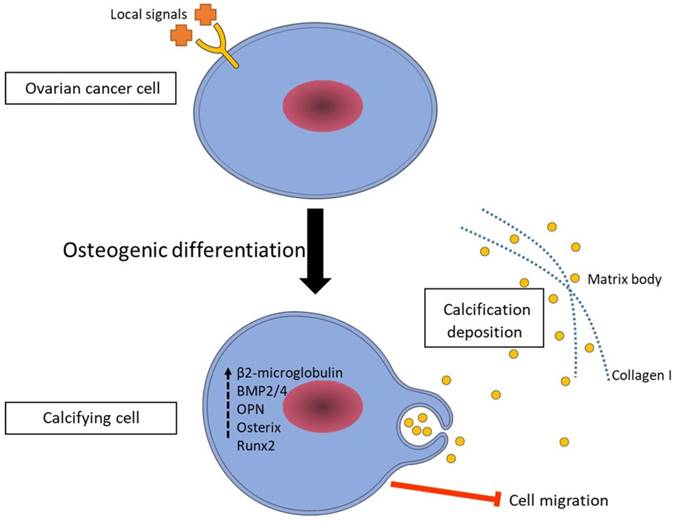 4. Das DK. Psammoma Body: A Product of Dystrophic Calcification or of a Biologically Active Process That Aims at Limiting the Growth and Spread of Tumor?. Diagn Cytopathol. 2009;37:534-41

21. Dougall WC. Molecular pathways: osteoclast-dependent and osteoclast-independent roles of the RANKL/RANK/OPG pathway in tumorigenesis and metastasis. Clinical cancer research: an official journal of the American Association for Cancer Research. 2012;18:326-35