Fasudil has been proven to be a promising chemotherapeutic drug for various malignancies. However, the potential anticancer effects of fasudil in oesophageal squamous cell carcinoma (ESCC) remain to be established. We confirmed the RhoA activity is inhibited by fasudil in ESCC cells. Then measured the effects of fasudil on apoptosis and autophagy in ESCC. Our study showed fasudil could both induce ESCCs apoptosis and autophagy, and when fasudil-induced autophagy was inhibited by knockdown of the essential autophagy genes (Beclin 1 or ATG7), and pharmacologic agent (chloroquine) treatment, both treatments also significantly sensitized ESCC to fasudil-induced apoptosis, reducing cell viability in vitro. Our study showed autophagy inhibitors combined with fasudil could significantly induce ESCC apoptosis, which may provide a novel therapeutic strategy for ESCC.

Oesophageal squamous cell carcinoma (ESCC) is the domination histological subtype of oesophageal cancer, accounting for more than 90% of this malignancy [1]. The 5-year overall survival (OS) rate of patients with ESCC is less than 10% [2]. Its unfavourable prognosis is mainly explained by the fact that patients are usually diagnosed at an advanced stage. Even in operable patients, more than 50% suffer local recurrence or distant metastasis [3]. Chemotherapy is the mainstay of palliative treatment for advanced or recurrent cancer; however, its poor outcomes and severe toxicity urgently require that novel drugs be explored.

The RhoA/ROCK pathway plays a critical role in ESCC progression, including promoting tumour cell growth, migration, metastasis and poor prognosis [4, 5]. RhoA/Rock signal pathway is as recognized as one of the upstream regulators of Beclin-1-mediated autophagy and regulates the homeostasis between autophagy and apoptosis[6]. Indeed, adenovirus-mediated RhoA shRNA suppresses the growth of ESCC cells in vitro and in vivo [7]. However, the lack of efficacy and accuracy of virus vectors infecting the tumour cells restrict the practical application of adenovirus-mediated gene therapy for cancer[8].

Fasudil, a pharmacological RhoA/ROCK pathway inhibitor, is a clinically available drug without obvious adverse effects on cardiovascular disease[9]. In addition, fasudil inhibits tumour growth, metastasis, and invasion in a variety of tumour types, including fibrosarcoma [10], hepatocellular carcinoma [11], acute myeloid leukaemia [12] and lung cancer [13]. It also plays a role in anti-angiogenesis in tumours by inducing hypoxia-inducible factor-1alpha degradation [14]. However, the potential anti-cancer effects of fasudil in ESCC have not been fully characterized.

In this study, we aimed to show that the RhoA inhibitor fasudil induces ESCC autophagy and apoptosis. By employing pharmacologic and genetic agents to inhibit autophagy, the proapoptotic effect induced by fasudil was enhanced significantly. These results suggest that fasudil combined with an autophagy inhibitor is a novel and promising strategy for the treatment of ESCC.

For evaluating fasudil-induced apoptosis, ESCC cells were sub-cultured on a 24-well plate covered with 13 mm × 13 mm cover slips and exposed to fasudil. The cells were fixed with 10% absolute methanol, permeabilized with 0.25% Triton X-100 and stained with DAPI (1 g/ml) for 10 min. The morphologic changes in characteristic apoptotic nuclei were examined by confocal microscopy (Olympus, Tokyo, Japan).

Cells were cultured onto slides in six-well plate and exposed to fasudil for indicated times, then collected and fixed in 0.1% paraform for 30 min. After being washed in PBS, the slides were soaked in DAPI staining solution (100 µg DAPI dissolved in 100 mL PBS that contain 0.1% TritionX-100) for 10 min in the dark. The morphologic changes of apoptosis characteristic nuclei were examined by confocal microscopy (Olympus).

Cells were growth on a 96-well plate (Falcon; BD Biosciences Discovery Labware, Bedford, MA) at a cell density of 4000 per well, and diverse concentrations of compounds were added to the culture medium and incubated for the indicated time. Cell proliferation was detected by the CCK-8 assay as reported previously [15].

Cells (1000 cells/2 ml/well) were planted in six-well plates and were deal with fasudil at diverse concentrations (0-100 nM) for 48 h. After being washed with fresh medium, the cells were incubated to grow for 21 days to form cell colonies, which were then stained with 1% crystal violet, and the colonies containing more than 50 cells were counted.

Knockdown of Beclin 1 gene expression was obtained by transfection of small interfering RNA (siRNA), which was purchased from Ambion (Norwalk, CT, USA). A negative control siRNA and Oligonucleotide duplexes targeting Beclin 1 (s16537) were ordered from Ambion (Norwalk, USA). ATG7 siRNA was purchased from Qiagen company (SI02655373); The siRNA was transfected into the cells using FuGENE HD Transfection Reagent (Promega, USA) in accordance with the manufacturer's instructions.

Cells were seeded in 175-cm2 flasks. After hatch with 50 µM fasudil for 48 h, floating and adherent cells were collected and merged. Preparation of cell lysates and the evaluation of caspase-9 and caspase-3 activity was performed with a Caspase-9 and Caspase-3 Cellular Activity Assay Kit (Calbiochem, La Jolla, CA, USA) according to the manufacturer's instructions.

RhoA activation in ESCC cells was inhibited by fasudil treatment

To detect the effect of fasudil on RhoA activation in human ESCC cells, we treated EC109 and KYSE150 cells with 0-100 nM fasudil for 24 h and measured the Rho activation by small G-protein activation assay. We found that fasudil had a potent inhibitory effect on RhoA activation (Fig. 1A).

RhoA inhibitor induced ESCCs apoptosis. (A)Inhibitory effects of fasudil on the RhoA pathway in EC109 and KYSE150 cells. Cells were seeded in a 6-well plate; when the cell growth reached approximately 80% intensity, diverse concentrations of fasudil were added to the culture medium and incubated for 24 h. The activity of RhoA was detected by RhoA activation assay. The results are representative of three different experiments. (B)Characteristic apoptosis was seen in KYSE150 and EC109 cells treated with fasudil for 48 h. (Original magnification, 200×). (C) Western blot analysis was performed with cleaved caspase-3 antibody and caspase-9 antibody probes. Blank: PBS treatment. GAPDH, glyceraldehyde-3-phosphate dehydrogenase. 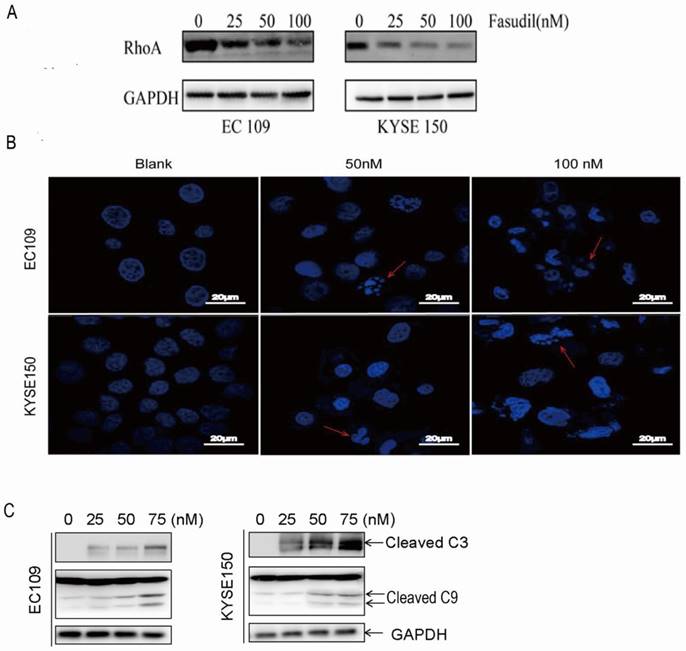 We assessed the effect of fasudil on apoptosis in human oesophageal squamous cell carcinoma cells in vitro by DAPI staining. Figure 1B shows that treatment with PBS (blank) did not obviously induce apoptosis in cells, but typical morphological alters associated with apoptosis-chromatin condensation, apoptotic body formation, and DNA fragmentation were prominently detected in fasudil-treated EC109 and KYSE150 cells. The addition of fasudil to cultured cells caused an obviously induction of apoptosis in a dose-dependent manner compared with the control cultures (P<0.001). Furthermore, procaspase-3 cleaved to yield 17/19 kD fragments, and procaspase-9 cleaved to produce a 35/37 kD band that was also detected in EC109 and KYSE150 cells after fasudil treatment (Figure 1C). These results indicate that fasudil indeed induced apoptosis in cancer.

Autophagy analysis was performed by immunoblotting for microtubule-associated protein 1B-light chain 3 (LC3), as previously described [16-18]. Fasudil can induce the switch of LC3-I to LC3-II in a dose- and time-dependent manner in EC109 and KYSE150 cells (Figure 2A and 2B), showing that autophagy might be induced by fasudil. Consistently, P62, a regulator of the autophagic pathway, was obviously down-regulated in fasudil-treated cells. Nevertheless, Fasudil also induced an increase of Beclin-1 in ESCC cells similar to its effects on conventional autophagy.

Inhibition of fasudil-induced autophagy enhances the apoptotic effect of fasudil

Much research has shown that autophagy may act as a protective response in protecting tumour cells from therapy-induced cell apoptosis. We treated ESCC cells with fasudil in combination with a pharmacological autophagy inhibitor, chloroquine, that prevents autophagosome degradation. Compared with the treatment of fasudil or chloroquine alone, treatment of ESCC cells with fasudil and chloroquine led to an obvious inhibition of cell proliferation (P<0.001, Figure. 3A and 3B) and foci formation (P<0.001, Figure. 3C) and an increase in the induction of apoptosis (Figure 3D).

Fasudil induces autophagy in ESCC cells. (A) Western blot showing an increase in LC3- II and Beclin 1 levels in EC109 and KYSE150 cells after treatment with fasudil, while decrease in P62. The cells were treated with 0, 25, 50 or 100 nM for 24 h. (B) Western blot showing an increase in LC3-II and Beclin 1 levels in cells treated with or without 50 nM fasudil for the indicated time, decreases in P62. 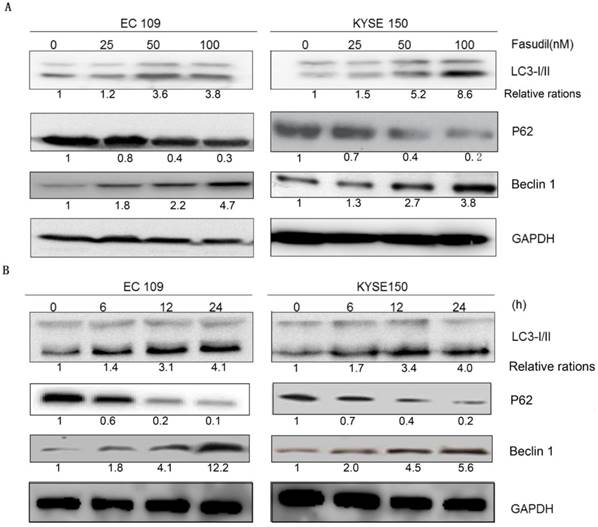 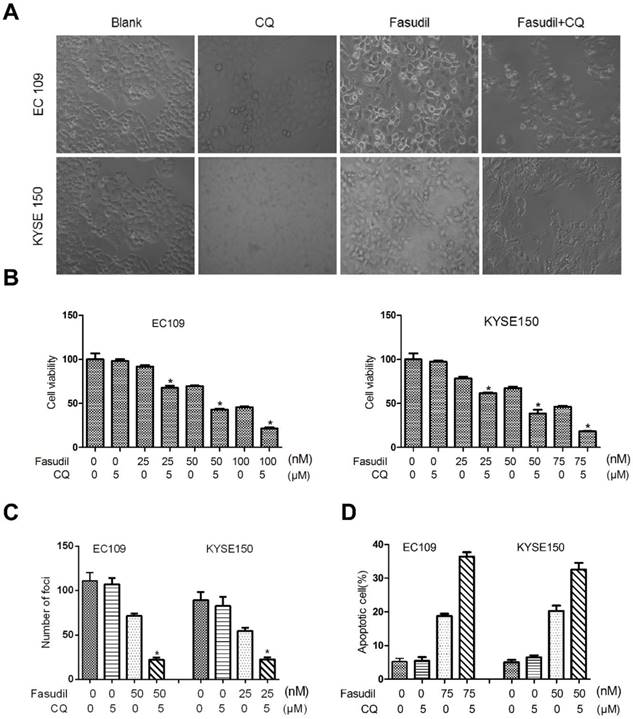 Autophagy is recognized as an evolutionarily conserved, intracellular self-defence mechanism responsible for degrading unnecessary or dysfunctional cellular organelles[19]. There is much proof to show that autophagy is a “double-edged sword” since it can be either protective or damaging, and the effects may change during tumour progression. In most studies, the inhibition of autophagy leads to increased oesophageal cancer cell apoptosis, indicating that autophagy might be a pro-survival mechanism rather than a cell death mechanism[20]. Herein, we show that the LC3-I to LC3-II conversion in fasudil-treated cells was increased in comparison with untreated cells. To date, no research has showed whether fasudil can induce autophagy in ESCC.

Effect of inhibition of Beclin 1 or ATG 7 expression on fasudil-induced apoptosis in ESCC cells. (A) Western blot showing a decrease in the expression of Beclin 1(or ATG7, figure 4C) when EC109 and KYSE150 cells were transfected with Beclin 1 targeting siRNA vs negative control siRNA. (B) Western blot indicating that silence of Beclin 1 (or ATG 7, figure 4D) with siRNA impeded fasudil-induced raise in LC3-II levels in EC109 and KYSE150 cells. (E) Fasudil combined with autophagy inhibitor effectively induced ESCC cells apoptosis. Combination therapy with fasudil (75 nM×48 h) and chloroquine (5 mM×48 h) led to more ESCC cells apoptosis, higher caspase-3 and caspase-9 activities than fasudil only (*P<0.05, fasudil plus Beclin 1(or ATG 7) siRNA vs fasudil). 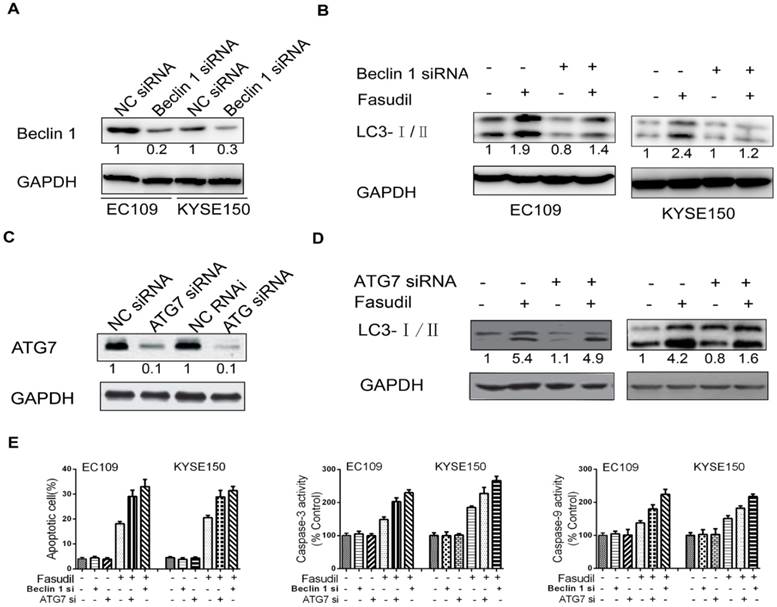 A large number of preclinical evidence shows that autophagy inhibition is currently being used as a novel anticancer therapeutic strategy, including for ESCC[21, 22]. Chloroquine (CQ) is well recognized as an autophagy inhibitor that controls acidic lysosomes. Our study showed that CQ combined with fasudil could significantly enhance anti-cancer effects by inducing apoptosis. To further detect the protective role of autophagy, we treated ESCC cells with Beclin 1 siRNA. Transfected ESCC cell lines were successfully established, and we verified that Beclin 1 siRNA reduced Beclin 1 protein expression by western blot. Using flow cytometry analysis, it was subsequently demonstrated that compared with the control siRNA group, the knockdown of Beclin 1 in ESCC cells significantly induced apoptosis with fasudil treatment. A caspase activity assay was then performed to examine the activation of caspases as a possible mechanism underlying the increased levels of apoptosis observed in Beclin 1 knockdown ESCC cells. A significant increase in active caspase-3 and caspase-9 were observed in Beclin 1 siRNA-transfected ESCC cells. This was consistent with the results obtained by FACS analysis. Similar to effect of Beclin 1 siRNA on fasudil-induced autophagy and apoptosis, Atg7 siRNA also strongly prevented autophagy and increased apoptotic cells compared with siRNA controls. Therefore, autophagy inhibition induced strong activation of caspase-3 and caspase-9 in ESCC cells, which suggests that caspase-dependent apoptosis may have contributed to the synergistic anticancer effects of fasudil combined with an autophagy inhibitor observed in ESCC cells.

In summary, we have shown that the RhoA inhibitor fasudil has an anti-cancer effect in ESCC; it may induce ESCC cell apoptosis and autophagy. In addition, our findings suggest a novel approach to improve fasudil anti-cancer effects related to autophagy inhibition. This combined therapy increases the level of apoptosis in ESCC cells, resulting in effective growth inhibition and elimination of cancer cells. Clinical research on targeting autophagy provides a promising therapeutic strategy to overcome resistance and enhance the effects of anticancer therapies in cancer patients[17].