Objective: The aim of the present study was to determine the prognostic significances of markers of preoperative systemic inflammatory response (SIR) in patients with ovarian clear cell carcinoma (OCCC).

Epithelial ovarian cancer (EOC) remains as the most lethal gynecologic cancer and a leading cause of cancer-related death in women [1]. Effective screening strategies are lacking, and the majority of women are still diagnosed with advanced stage disease. Ovarian clear cell carcinoma (OCCC) is a type of epithelial ovarian cancer and differs from high grade serous ovarian cancer (HGSC) in terms of its clinical, histopathological, and genetic features [2]. OCCC is frequently diagnosed in Asian women and shows greater higher resistance to first-line platinum and taxane-based chemotherapy than HGSC. Furthermore, patients with stage Ic-IV OCCC have much poorer prognoses than patients with serous carcinoma, and thus, pointed efforts are required to develop more effective treatment strategies and to identify prognostic factors [3].

The factors known to influence treatment outcomes in OCCC are FIGO stage, LN status, and the presence of endometriosis and residual tumor after primary cytoreductive surgery [4,5]. However, most of these prognostic biomarkers are limited to intraoperative surgical findings and postoperative pathological features, and thus, clinically useful preoperative prognostic factors that accurately predict chemotherapeutic response and prognosis are needed to improve survival rates in OCCC.

Accumulating evidence indicates inflammation is a hallmark of cancer, and that tumor-associated inflammatory microenvironments facilitate tumor growth and metastasis. Several inflammatory response-related biomarkers in peripheral blood, such as, neutrophil-to-lymphocyte ratio (NLR), platelet-to-lymphocyte ratio (PLR), and lymphocyte-to-monocyte ratio (LMR), have been widely investigated as potentially useful prognostic markers in different cancers. Furthermore, it has been established that blood cells associated with host inflammation and immunity, such as, neutrophils, lymphocytes, monocytes and platelets, can be influenced by the cytokines secreted by tumors [6].

The prognostic and predictive values of several preoperative hematologic parameters have been investigated in epithelial ovarian cancer (EOC). Of these potentially useful parameter, a low LMR has been shown to be significantly associated with clinicopathological characteristics, indicative of poor prognosis and disease aggressiveness in patients with several solid tumor types [7]. In addition, NLR and PLR values have assisted the identification of patients with a poor prognosis and have been shown to have potential clinical value for predicting platinum resistance in EOC [8]. However, few studies have evaluated the prognostic significance of markers of systemic inflammatory response (SIR) in terms of predicting survival in OCCC. Therefore, we undertook the present study to investigate the prognostic values of preoperative SIR markers in OCCC.

One hundred and nine OCCC patients that had underwent primary debulking and adjuvant paclitaxel and carboplatin chemotherapy at university hospitals between April 2007 and June 2012 were retrospectively enrolled in this study, which was approved by the Institutional Review Board (IRB) of Pusan National University Hospital. Patients with any inflammatory condition, except endometriosis, or another malignancy were excluded because of possible influences on laboratory test results. Clinical, pathological, and preoperative complete blood count (CBC) variables were subjected to analysis. No patient received neoadjuvant chemotherapy. Histological diagnoses were based on the WHO criteria, and all microscope slides were reviewed by an experienced gynecologic pathologist. Clinicopathologic characteristics, such as, age, FIGO stage, LN metastasis, malignant ascites, endometriosis, preoperative CA125 level, residual mass, and platinum response were documented and subjected to analysis (Table 1).

The Chi-square test was used to analyze differences between proportions, and the OS and PFS curves were obtained by Kaplan-Meier analysis using the log-rank test. Cox regression analysis was used to determine hazard ratios (HR) and multivariate analysis. The analysis was conducted using SPSS, version 18.0 (SPSS Inc., Chicago, IL, USA). All presented P-values are two-sided, and statistical significance was considered at P<0.05.

Patient' baseline characteristics are shown in Table 1. Median age of the 109 study subjects was 50 years (range 24-77 years). As previously reported, early stage disease was more common than advanced disease in our patients; 64 (58.7 %) had disease stage I to II, and 45 (41.3%) had disease stage III to IV. Twenty-four patients (22.0 %) were endometriosis- associated. Eighty-five patients (78.0%) were optimally debulked at primary surgery with less than 1 cm of residual disease and all had platinum-sensitive disease. 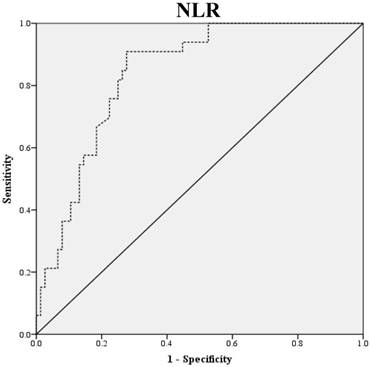 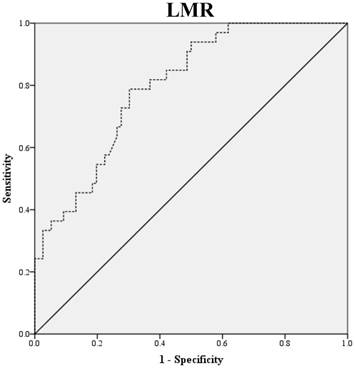 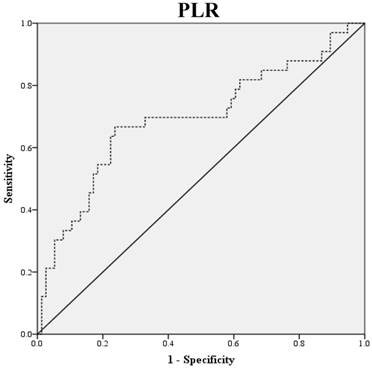 3. Relationships between cancer- and host-related characteristics and prognosis

EOC is the most lethal gynecologic cancer and a major cause of cancer-related death in women [1]. This high mortality is mainly due to difficulties associated with early diagnosis, the development of resistance to chemotherapeutic agents, and recurrence. OCCC often has a poorer prognosis than high grade serous carcinoma mainly because of its resistance to standard chemotherapy regimens. Known prognostic factors in OCCC include age, FIGO stage, LN status, the presence of endometriosis, and residual tumor after primary cytoreductive surgery [4,5]. However, the abilities of these conventional intraoperative and postoperative factors to predict survival are inadequate. To date, few reliable preoperative biomarkers have been identified that can predict the prognosis in OCCC.

The association between inflammation and tumorigenesis was first reported by Virchow in 1863 [9] and available evidence indicates chronic inflammation plays a major role in cancer development and progression, and in therapeutic response [9-11]. Moreover, accumulating evidence suggests systemic inflammatory response (SIR) is a key determinant of outcome in patients with cancer, and several authors have suggested reported hematological markers of SIR, such as, NLR, PLR, and LMR, might serve as independent prognostic markers of survival.

Clinical and pathologic characteristics according to NLR, LMR or PLR in 109 patients with ovarian clear cell carcinoma 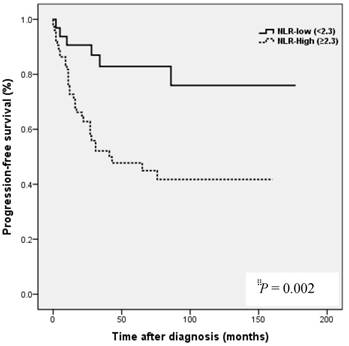 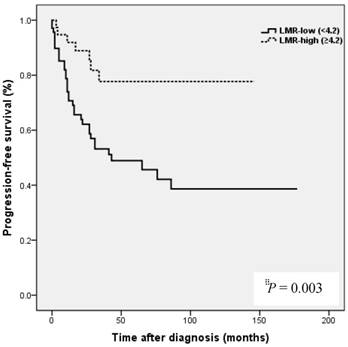 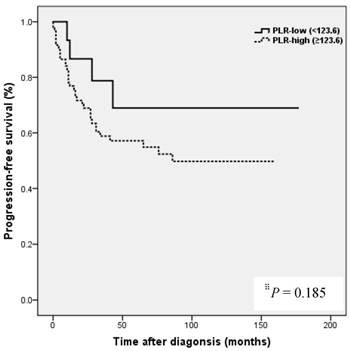 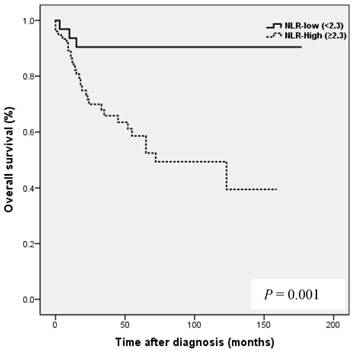 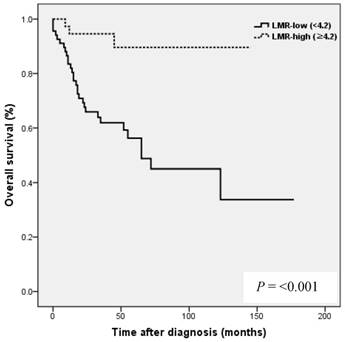 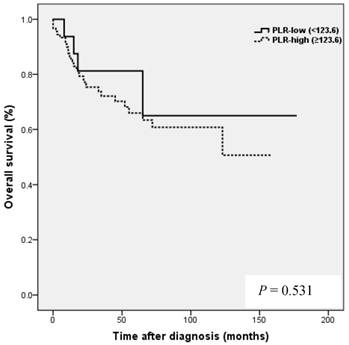 Of these suggested markers of SIR, LMR (absolute lymphocyte count (ALC) / absolute monocyte count (AMC)), has attracted increasing attention recently, and has been suggested to be related to survival in malignant lymphoma [12] and in numerous solid tumors [13-16]. Lymphocytes represent host anti-tumor immune response, and cause cytotoxic cell death and inhibit tumor cell proliferation and migration [10, 17]. Furthermore, lymphocytes that migrate into tumor microenvironments evolve into tumor-infiltrating lymphocytes (TILs), and in a recent meta-analysis, it was suggested TIL might be a prognostic biomarker in ovarian cancer [18]. On the other hand, monocytes can differentiate into tumor-associated macrophages, which promote tumor proliferation [19], tumor progression and metastasis by producing various cytokines in different cancer types. In a previous study, in which we assessed the prognostic value of LMR in a cohort of 234 EOC patients that underwent primary debulking surgery and adjuvant chemotherapy, we found a high LMR was strongly correlated with age, serum CA-125 level, FIGO stage and malignant ascites, and that 5-year PFS and OS rates were better for those with a high LMR (PFS, 62.5% vs. 40.0%, P<0.0001; OS 67.2% vs. 42.2% P<0.0001, respectively) [20]. In addition, LMR was found to predict the outcome of primary surgical cytoreduction in EOC patients, and LMR, age, CA125 level, and WBC count were found to be reliable predictors of suboptimal cytoreduction [20]. Although the prognostic value of SIR has been established in EOC, its value in OCCC has not been well studied [21-23], and few studies have compared the prognostic values of SIR, NLR, and PLR in OCCC, but the prognostic value of LMR has yet to be evaluated in OCCC.

NLR and PLR have been shown to be independent prognostic markers of adverse clinical outcomes in EOC [8,24,25] and specifically in OCCC [21-23]. In EOC, NLR known to be strongly associated with poor clinicopathological features, a high tumor burden, stage, preoperative CA125 level, and ascites at surgery in EOC [24]. In patients with OCCC, NLR has been reported to be associated with advanced FIGO stage, intraperitoneal metastasis, more ascites, elevated CA-125, and platinum resistance [21], and in the same study, high NLR and PLR were associated with poor prognosis and failure to response to treatment in OCCC [21]. In the present study, a high NLR was significantly associated with advanced FIGO stage (III to IV), presence of malignant ascites, and platinum resistance (Table 2). In addition, survival analysis showed that high NLR was associated with poorer PFS and OS than low NLR (Fig. 2). However, although univariate analysis showed NLR was significantly associated with PFS and OS, these relations were not supported by multivariate analysis. A high preoperative PLR has also been shown to be associated with advanced disease stage and reduced survival in EOC [23,25]. Supoken et al. showed a high PLR was associated with adverse outcomes, advanced stage, resistance to primary treatment, and decreased survival in OCCC [23], and Kim et al. reported that high PLR and NLR were associated with advanced-stage disease, non-complete response, and platinum-resistance in OCCC [22]. However, in the present study, no significant correlation was found between PLR level and age, FIGO stage, LN metastasis, malignant ascites, the presence of endometriosis, CA-125 level, residual mass, or platinum response (all, P > 0.05) (Table 2), and survival analysis showed that a high PLR was not significantly associated with poorer PFS or OS (Fig. 2). This discrepancy may have been caused by sample size differences and the different PLR cut-off values used. In previous studies, PLR cut-offs varied between 140 and 300 [23]. As a result, the prognostic meaning of PLR remains unclear. In the present study, a high LMR was significantly associated with early FIGO stage (I to II), no LN metastasis, no malignant ascites, and higher platinum response in OCCC (Table 2). Kaplan-Meier analysis supported these positive relations as it show patients in the high LMR group had significantly higher PFS (P=0.003) and OS (P <0.001) than patients in low LMR group (Fig. 2). These findings suggest that a high LMR caused by increased levels of peripheral lymphocytes, increases immune surveillance and response to adjuvant chemotherapy, and thus improves PFS and OS. Furthermore, univariate analysis showed LMR was significantly and positively associated with PFS and OS, and multivariate analysis showed that a high LMR independently predicted better OS, but not better PFS (Table 4). We further analyzed the absolute count of neutrophil, lymphocyte or monocyte in patients with ovarian clear cell carcinoma with or without endometriosis. The absolute count of neutrophil, lymphocyte or monocyte was not upregulated in patients with clear cell ovarian cancer (Table S1).

The strength of our study is that it represents a first attempt to evaluate the prognostic value of LMR in OCCC. Recent studies on SIR markers in OCCC did not include LMR as a potential prognostic marker [21-23]. OCCC has been well demonstrated to be associated with chronic inflammation. Kato et al. reported that plasma cell rich inflammatory stroma and cancer cells were responsible for inducing inflammation and stimulating plasma cell differentiation in a paracrine manner in OCCC [26]. Moreover, a large number of patients with OCCC despite its rarity were included.

Some limitations of the present study warrant consideration. First, due to the retrospective nature of the study, we were unable to fully confirm the prognostic significance of LMR. Second, LMR is a non-specific marker of inflammation, and though we excluded patients with any inflammatory condition, laboratory results may have been affected by the presence of other unrecognized systemic inflammatory diseases.

In conclusion, this is the first study to assess the prognostic value of LMR in patients with OCCC, and it shows a high LMR is associated with better survival, and suggests LMR might be an independent prognostic factor of survival. Thus, our findings indicate preoperative SIR measurements might provide a straightforward, convenient means of identifying OCCC patients with a poor prognosis.

Conflicts of interest relevant to this article were not reported.