Materials and Methods: 193 newly diagnosed DLBCL patients were retrospectively analyzed. All patients received 6-8 cycles of rituximab plus cyclophosphamide, doxorubicin, vincristine and prednisone (R-CHOP). The type of BM FDG uptake pattern was recorded by two blinded reviewers independently. The relationship between clinicopathologic features and BM patterns was analyzed. The prognostic value of different BM patterns was evaluated by Log-rank test and Cox-regression analysis.

Diffuse large B-cell lymphoma is the most common type of non-Hodgkin's lymphomas (NHL) and is characterized by a relatively high frequency of extra-nodal spread[1]. Bone marrow involvement is diagnosed in approximately 15% of newly diagnosed DLBCL and accounts for 1 point in the International Prognostic Index (IPI) score.

Bone marrow biopsy (BMB) has been the gold standard for bone marrow evaluation for many decades and is still recommended in the conventional staging of all patients with DLBCL by guidelines[4]. However, BMB is an invasive and painful procedure that has a small but non-negligible risk of complications such as pain, anxiety, hemorrhage and infection[5, 6]. Furthermore, the small sample size from biopsy or the BMI focal status may cause the omission of BMI lesions, which is the main reason for the poor sensitivity of BMB[2].

18F-FDG PET/CT, as a noninvasive whole-body metabolic imaging technique, is now routinely applied in the clinical work-up of DLBCL, especially in staging, restaging as well as prognostic analysis, owing to its ability to accurately evaluate both nodal and extra-nodal disease sites[7-9]. The diagnostic and prognostic value of PET/CT-ascertained BMI remains controversial in the recent retrospective studies[2, 10-14]. The lack of standardized interpretation of diffuse BM pattern could explain the conflicting conclusions. As we all know, focally increased FDG uptake of BM is generally accepted as a sign of BMI, but it is difficult to identify whether the diffuse pattern is BMI. The diffuse BM FDG uptake has been extensively reported to be associated with both malignant infiltration and benign etiologies([15-18]). Up to now, there has been no consensus on the interpretation of diffuse BM pattern in DLBCL. Unlike the previous studies, our large sample, single-center study was designed to determine the prognostic meaning of different BM FDG uptake patterns of PET/CT. In the present study, the focal, diffuse and normal BM uptake patterns in DLBCL were investigated individually instead of simply being interpreted as BMI or non-BMI. To our knowledge, very little was found in the literature about the prognostic value of PET/CT-based BM patterns in DLBCL.

The study has been approved by the institutional review board of Ren Ji Hospital Shanghai Jiao Tong University School of Medicine. 193 consecutive patients undergoing pre-therapy staging for newly diagnosed DLBCL in our PET/CT center between January 2007 and June 2016 were retrospectively enrolled in this study. All patients were treated with 6-8 cycles of R-CHOP therapy. Our study exclusion criteria were as follows: patients with transformed lymphoma or coexistence of another lymphoma subtype in the diagnostic biopsy, those who had received hematopoietic growth factor, chemotherapy or glucocorticoids prior to PET/CT imaging, those with time interval between PET/CT and BMB exceeding 30 days. Patient data were recorded in details as follows: age, sex, Ann Arbor stage, International Prognostic Index, presence of B symptoms, extra-nodal involvement. All of them were extracted from medical records. Patient follow-up data were searched to detect presence of disease progression and progression-free survival times. PFS and OS were calculated from diagnosis to disease progression or death from any cause.

The study was performed by dedicated PET/CT scanners (2007-2012, GE Discovery LS PET/CT system; after 2012, Siemens Biograph PET/CT system) according to standard protocol. All patients enrolled have received an intravenous injection of 0.1mCi/kg 18F-FDG after fasting for at least 6 hours. The blood glucose level of each patient was strictly confirmed under 150 mg/dL right before the injection. The patients were free to rest on the bed and relax for 45 to 60 min after the FDG administration. Diagnostic-quality unenhanced CT images were acquired before PET data acquisition and were used for attenuation correction in the PET image reconstruction.

MIP images of focal (A), diffuse (B) and normal (C) FDG uptake patterns of bone marrow in DLBCL.

In our hospital, unilateral iliac crest trephine biopsy and marrow aspirate were routinely performed in all newly diagnosed DLBCL patients. All BMBs were performed according to standard procedures and the BMB results were obtained from the pathology reports. BMB material was routinely formalin fixed and paraffin embedded and subsequently evaluated morphologically on the basis of a standard immunohistochemistry, including antibodies to identify CD3, CD79a, and CD20-positive cells.

Differences in clinicopathological factors between groups were analyzed by chi-square test, T test and Wilcoxon test, according to the types of variables. The prognostic significance of the BM uptake patterns was derived by the Kaplan-Meier method and the between groups difference was evaluated by Log-rank test. Cox regression model was used to identify independently predictive variables from clinical, pathologic and imaging variables. The hazard ratio (HR) and its 95%CI were also calculated by Cox-regression model. All the statistical analyses were performed using SPSS, version 20.0 (IBM corporation, NY, USA). Double sided p values <0.05 were considered statistically significant.

Correlations between PET/CT and BMB

We separated the patients into 3 groups according to their BM uptake pattern on baseline PET/CT. 147 (76.2%) patients had normal FDG uptake (nPET) on bone marrow (compared with normal liver). In patients with BM uptake higher than normal liver, 28 (14.5%) patients were presented with focal uptake (fPET+), and 18 (9.3%) patients had diffuse uptake on BM (dPET+). BMB was routinely performed in all the patients. BMB positive was found in 14 (7.3%) out of 193 patients. Of fPET+ and dPET+ patients, BMB positive accounted for 36% (10/28) and 17% (3/18), respectively. For nPET patients, BM involvement assessed by BMB was found only in 1 out of 147 patients. The case contribution of BM involvement assessed by PET/CT BM uptake pattern and BMB is shown in Figure 2. When using both fPET+ and BMB+ as reference standards, the sensitivity, negative predictive value and accuracy of PET/CT and BMB were 87.5%, 97.6% and 97.9% versus 43.8%, 89.9% and 90.7%, respectively. We also analyzed the relationship between different BM uptake patterns and BMB results. fPET+ patients had a larger proportion of positive BMB compared with fPET- (dPET+ or nPET) patients (35.7% vs 2.4%, p<0.001), while dPET+ patients had a relatively higher proportion of positive BMB than dPET- patients without significant difference (16.7% vs 6.3%, p=0.106) (Table 2). 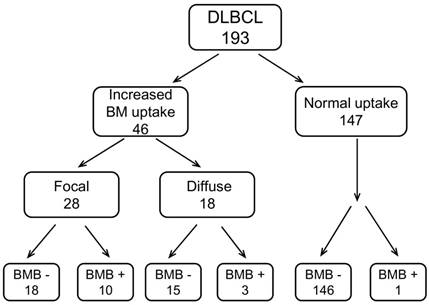 Comparison of SUVmax on BM between different groups. 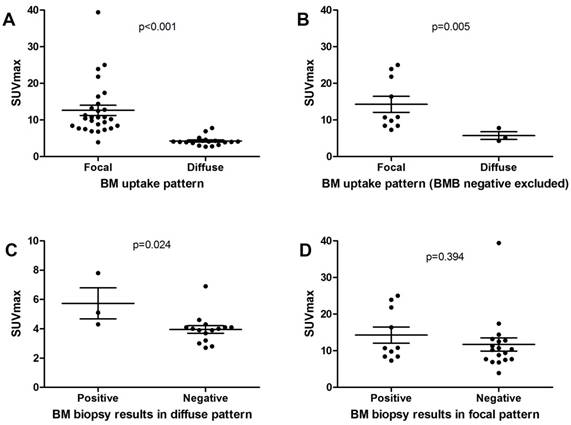 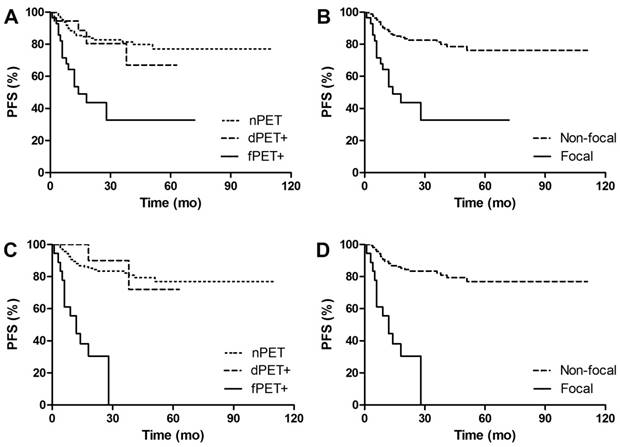 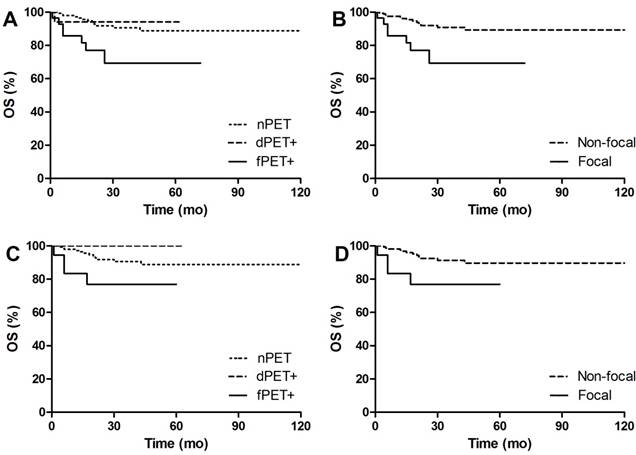 Characteristics and prognosis in relation to different BM patterns

Univariate and multivariate analysis of PFS and OS.

This retrospective study with large sample from single-center aimed to investigate the prognostic significance of BM assessment in newly diagnosed DLBCL based on FDG uptake pattern from PET/CT imaging compared with BMB.

Our study first gave a detailed description of BM FDG uptake patterns to assess bone marrow status in DLBCL patients. In a series of 193 patients, 28 patients had fPET+ and 18 patients had dPET+ while the other 147 patients had nPET. We found BMB+ was not concordant with fPET+, as BMB+ only accounted for 36% (10/28) of fPET+ patients. Since fPET+ was generally interpreted as BMI, this missing rate of 64% (18/28) questioned the value of the BMB as a single examination for assessing BMI of DLBCL. The small size of the BMB sample and the focal disease of BMI away from the iliac crest are reasonable explanations for this result.

The finding of dPET+ of BM is not rare in DLBCL. In some studies, this kind of BM pattern was interpreted negative for BMI[2], while some other researchers considered it as positive[11, 19, 20]. The disagreement on the interpretation made it difficult to accurately assess the value of dPET+ in DLBCL. In our study, we separated 18 patients with dPET+ as a single group. In dPET+ group, three patients were BMB positive but no one was upstaged by BMB. No significant difference was found in the ratio of BMB positive between dPET+ patients and the overall population. We observed a clear correlation between dPET+ and low hemoglobin level, which suggested that dPET+ was mostly related to reactive myelopoiesis. The fact that ESR level tended to be higher in dPET+ patients than in the overall population implied dPET+ might also be associated with inflammation. Interestingly, the BM SUVmax of dPET+/BMB+ patients was higher than dPET+/BMB- patients but lower than fPET+ patients, which may be attributed to the diffuse but low-density malignant infiltration of BM.

In our study, PET/CT only missed one BMB positive patient out of 147 nPET patients, who had already been staged as stage IV according the PET/CT imaging. It means we must do 147 BMBs to catch only one BMI missed by PET/CT. This may suggest that BMB could be safely omitted in nPET patients, because of extremely high negative predictive value of nPET. A meta-analysis from Adams et al. suggested that BMI cannot be excluded for patients with negative PET findings on BM, because they found that PET/CT can miss BMI in about 3.1% of patients[21]. We think this opinion not appropriate because they didn't mention whether BMB+ upstaged nPET patients and how much patients would benefit from BMB. And the heterogeneity of the nPET reference in their analysis also made the conclusion not convincing enough.

The prognostic value of BMI based on FDG PET/CT is still not demonstrated clearly. Some studies indicated the excellent prognostic value of PET-BMI in DLBCL patients [2, 11, 13, 22], while some studies drew the opposite conclusion [14, 19, 20]. In their studies, the diffuse BM pattern was interpreted differently, thus more or less leading to different conclusions. We have already demonstrated that the diffuse BM pattern was associated with anemia, inflammation or malignant infiltration. It's difficult to accurately identify BMI from the diffuse BM pattern. Liang et al defined the diffuse BM pattern with concomitant disappearance of BM uptake on post-therapy PET as BMI[13]. In our opinion, this definition is not appropriate because post-therapy PET can also exhibit diffuse BM uptake caused by the administration of hematopoietic cytokines and myeloid hyperplasia[15, 23]. So we explored the prognostic value of PET/CT-based BM uptake pattern instead of PET-ascertained BMI. Our results showed fPET+ patients had significant inferior prognosis compared with nPET patients, while 3y-PFS of BMB+ and BMB- didn't exist statistical difference. We further found fPET+ was able to identified the patients with poor prognosis from BMB negative patients (Figure 4C,4D,5C,5D). In multivariate analysis of PFS, only stage III/IV and fPET+ were proved to be independent predictors of PFS. To sum up, the focal pattern of BM is of better prognostic value than BMB. Unlike Chen-Liang 's and Khan's results, we didn't obtain the result that BMB was independently predictive for PFS and OS[14, 19]. We found the BMB+ rate in our study and previous studies differed in a considerable disparity, ranging from 6.0% to16.4%[2, 24]. This heterogeneity may lead to different conclusions on prognostic value of BMB. But fPET+ failed to independently predict OS in the present study. The relatively small number of deaths during follow-up in our study (10.4%, 20/193) may be the main reason for this result. Then we evaluated the prognostic value of dPET+. Although there was a small portion of BMB+ in dPET+ group, no significant difference in patients' survival was found between dPET+ and nPET groups.

In conclusion, 18F- FDG PET/CT could be a reliable tool for evaluating BM status and predicting prognosis in DLBCL patients. Only focal uptake pattern of BM, not diffuse pattern, is an independent predictor of inferior outcomes. Compared with BM pattern assessed by PET/CT, BMB seems to be unnecessary for the management of DLBCL as its low accuracy and limited ability of prognostic prediction. Further efforts should be made to confirm the prognostic value of PET/CT-based BM patterns in prospective and multicenter studies.