Pancreatic cancer is one of the most lethal malignant tumors, remaining the 4th leading cause of cancer-related mortality[1, 2]. Most patients are diagnosed with advanced disease and resistant to chemoradiotherapy, consequently, the median OS of PDAC is less than 1 year and 5-year survival is approximately 5%[3].Therefore, it's urgent to identify biomarkers to predict patients' prognoses more precisely and guide better individual therapies.

Prior study has shown that cancer cells always synthesize abnormal serum enzymes[4], such as LDH, a key enzyme in glycolysis. Universally known, glycolysis is a distinctive metabolism feature in cancer cells. The strong relationship among serum LDH level, tumor burden[5] and patients' prognosis has been reported in colorectal cancer, non-Hodgkin lymphomas and renal cell carcinoma[6-8]. Serum CA19-9 is an essential biomarker in PDAC[9, 10], and widely used for predicting tumor progression[9, 11]. Increasing evidences have suggested that persistent inflammation plays a vital role in carcinogenesis and prognosis[12, 13, 14]. Serum CRP is commonly used as an important biomarker for systemic inflammation and has been reported as a potential prognostic factor in various tumors[15, 16, 17]. As an important nutritional status index, several researches have proved the association between serum ALB level and survival in lung and ovarian cancers[18, 19].

Although the prognostic values of serum LDH, CA19-9, CRP and ALB levels have been confirmed in some reports, the debate continues about the validity in predicting prognosis by single parameter. So far, few studies investigated the survival model based on the combination of tumor metabolism, tumor biomarker, systemic inflammation and nutritional status in PDAC. Therefore, this retrospective study is aimed to investigate the prognostic value of the survival model combining the four biomarkers in advanced PDAC patients.

94 patients with locally advanced or metastatic PDAC receiving palliative chemotherapy in Shanghai General Hospital from 2009 to 2017 were recruited. All patients had baseline evaluation before treatment, including chest contrast enhanced computed tomography and abdominal contrast enhanced computed tomography or magnetic resonance. Eligibility criteria required individuals to have pathologically diagnoses of PDAC with the TNM stage of III or IV(AJCC, the 7thedition) and a good performance status( Karnofsky performance scores ≥ 80). Patients were previous treated with chemotherapy or radiotherapy were excluded. All patients were regularly followed-up on phone calls. Ethical approval was obtained by ethics committees of Shanghai General Hospital.

The primary aim of this retrospective study was to define a survival model based on tumor metabolism, tumor biomarker, systemic inflammation and nutritional status. All statistical analyses were performed using SPSS software (version20.0). Patients' characteristics were reported by descriptive statistics. The Pearson χ2 or Fisher's exact tests were used to compare clinicopathologic characteristics between groups, and non-parametric test was used to compare OS between groups. The HR was calculated using Cox proportional hazards regression model, by univariate and multivariate analysis respectively. The Kaplan-Meier method was used to estimate the survival curves with log-rank test assessing the significance. OS was defined as the time from the date of pathological diagnosis to death or the last follow-up visit. Statistical significance was defined with the p value ≤0.05.

94 patients with locally advanced or metastatic PDAC in Shanghai General Hospital from 2009 to 2017 were included in this study and the general characteristics are summarized in Table 1. The median age at diagnosis was 61 years old (range from 34 to 86 years old) with 67 males (71.3%). At treatment initiation, 75 patients (79.8%) were in stage IV based on the TNM staging system, consistent with the number of patients with metastasis (75 patients had metastasis).Besides, 82 patients (87.2%) had regional lymph node involvement. Following baseline evaluation, 71 patients (75.5%) received gemcitabine based palliative chemotherapy, and the rest received other chemotherapy (5-Fu based chemotherapy or albumin-bound paclitaxel). The median OS was 8.0 months, and was significantly longer for patients with early stage, no-lymph nodes involvement, or no-distant metastasis (p=0.016, p<0.001, p=0.016).The table illustrated that there were no significant differences in OS between different groups of clinicopathologic characteristics except stage, regional lymph nodes and metastasis.

The correlations between different groups and clinicopathologic characteristics were evaluated using Pearson χ2 or Fisher's exact tests. The results, as shown in Table 3, late stage (p=0.036, p=0.011), regional lymph nodes involvement (p=0.035, 0.026) and distant metastasis (p=0.036, 0.011) were significantly correlated with high serum LDH and CA19-9 levels. However, no significant correlations were found between CRP and ALB subgroups and clinicopathologic characteristics.

Then, one elevation of serum LDH, CA19-9, CRP or the decrease of serum ALB levels was defined as a score of 1.Consequently, patients were divided into five groups with the scores of 0, 1, 2, 3 and 4, respectively. However, as can be seen from table 3, no significant correlation was found between clinicapathologic characteristics and the scores.

Correlation between LDH/CA19-9/CRP/ALB and clinicopathologic characteristics 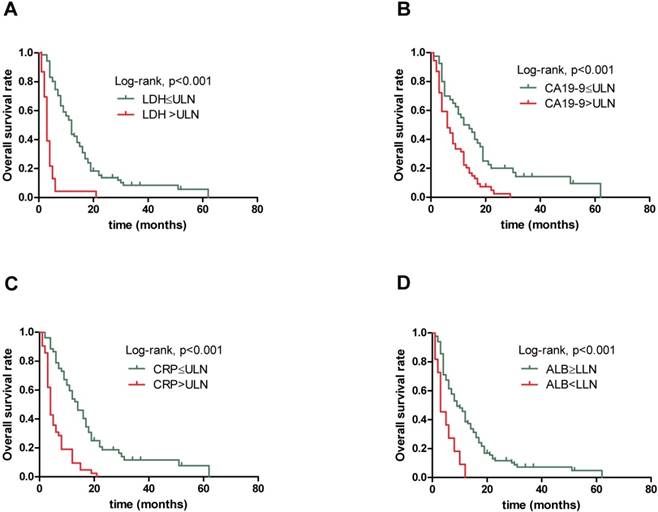 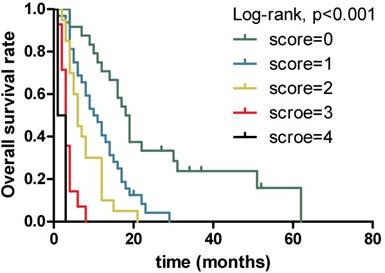 In this retrospective study, we investigated the clinical significance and prognostic role of 7 clinical variables and 6 serum biochemical markers in 94 patients with locally advanced and metastatic PDAC. All the parameters were included in the Cox proportional hazards regression model in both univariate and multivariate analysis. The 7 clinical variables are important clinical characteristics for PDAC. Widely acknowledged, stage, primary tumor, lymph node involvement and metastasis may be associated with prognosis. In the 7 clinical variables, the stage of primary tumor and the treatment regiments were divided into 2 parts, despite they have 3 parts. The reasons lay on the fact whether the tumor is easy for resection and gemcitabine is the first-line chemotherapy for patients. And we also analyzed the data with the 2 factor divided into 3 parts, the results were the same with that they were divided into 2 parts. The 6 serum biochemical markers are common laboratory tests which can be easily obtained for patients. Serum LDH and ALP levels are important metabolism markers and they have been proved to associate with the prognosis of PDAC[20, 21]. Serum CEA and CA19-9 levels are the most widely used biomarkers for diagnosis and prediction of prognosis in PDAC[22, 23]. As biomarkers for systemic inflammatory response and nutrition status, several studies have revealed that they are prognostic factors of survival in patients with PDAC[24, 25]. The results of multivariate analysis suggested that regional lymph nodes involvement was the only clinical factors associated with OS. Surprisingly, the stage, size of primary tumor and distance metastasis were not significantly associated with OS, probably due to the reasons that patients included were with late stage and all patients with T2 had distance metastasis indicating worse biological characteristics with metastasizing in early stage. As for serum biochemical markers, serum LDH, CA19-9, CRP and ALB levels were associated with OS. Serum ALP and CEA levels were excluded from the survival model after multivariate analysis, meaning that they are not independent factors for survival. A possible explanation for this is that ALP and CEA correlate with LDH and CA19-9, respectively, and they probably influence the prognosis through LDH and CA19-9. Patients with high serum LDH, CA19-9, and CRP levels or low serum ALB level had shorter OS. The four serum biochemical markers are routinely tested and the certain levels can be easily obtained in clinical practice, however, inaccuracy might exist on the evaluation of regiment lymph nodes involvement, owing to the subjective factors in imaging diagnosis. Accordingly, serum LDH, CA19-9, CRP and ALB levels are included in our survival model.

Warburg's report revealed that, anaerobic glycolysis is preferred by tumor cells, despite of the sufficiency of oxygen[26]. LDH, converting pyruvate to lactate, is a key enzyme in metabolism of tumor cells[27]. It has been reported that there are strong relationship between LDH and hypoxia microenvironment, commonly seen in PDAC, because oxygen and nutrients are obstructed by desmoplastic stroma. Through hypoxia inducible factors (HIFs), LDH and hypoxia microenvironment are associated with metastasis and worse prognosis in several tumors[28-30]. These metabolic changes in tumor progression cause changes of serum enzymes, such as serum LDH and ALP levels. High serum LDH level has been proved to be correlated with short OS in nasopharyngeal carcinoma[31]. Therefore, we investigated the relationship between serum LDH level and OS in patients with advanced PDAC. And we found high serum LDH level was significantly corrected with short OS. In patients with advanced PDAC, CA19-9 is the most commonly used biomarker in predicting prognosis[32, 33]. Our findings confirmed that serum CA19-9 level had strong association with the prognosis in advanced PDAC patients and consistent with the results universally known, patients with low serum CA19-9 level had better prognosis, .

Recently, it has reported that inflammation tumor microenvironment is important for tumor proliferation and survival[34, 35]. Besides, systemic inflammation also indicates poor prognosis[34, 35]. Serum CRP level, a biomarker of systemic inflammation, whose elevation correlates with poor prognosis is proved in colorectal cancer and pancreatic cancer[15, 36-39]. But, inversed results have been found in some studies[40, 41]. In this research, we found that high serum CRP level was a risk factor for prognosis. Low serum ALB level, indicating malnutrition, commonly occurs in patients with advanced PDAC. Our research demonstrated that lower serum ALB level was associated with poorer prognosis and shorter OS.

However, single biomarker cannot predict the certain patient's prognosis precisely, for instance, PDAC patients who lake of Lewis antigen will not suffer elevation of CA19-9, a part of Lewis antigen. Additionally, CA19-9 will elevate transitory if patients have systemic inflammation. So, we analyzed the rest 3 factors in 2 subgroups of each biomarker. We found that when patients with high serum LDH level, there were no significance for CA19-9 and CRP as biomarker, similar results had found in LDH and ALB in patients with normal CA19-9 level, CA19-9 and ALB with high CRP level and CRP with low ALB level. To eliminate the inaccuracy in single biomarker for predicting patients' prognosis, we combined the 4 factors presenting tumor metabolism, tumor biomarker, systemic inflammation and nutritional status to predict a certain patient's prognosis more precisely, by one positive value counting 1 point. The investigation showed that patients with higher score suffered significantly shorter OS. Because this score system evaluates patients' tumor metabolism, tumor marker, inflammation and nutrition comprehensively, we might predict the prognosis precisely and make more suitable treatment and evaluation plan for patients more likely to suffer bad prognosis. Nevertheless, the first limitation of this retrospect single-center study is the comparatively small sample size, leading to the fact that we could not divide the patients into training cohort and validation cohort. Besides, as a single-center study, selection bias is hard to be avoided. Finally, it's difficult to collect all the information completely in a retrospect study. In the future, we will design a prospective multi-center study and validate the results.

Our study confirmed the crucial role of serum LDH, CA19-9, CRP and ALB as biomarkers in predicting prognosis in patients with advanced PDAC. To precisely determine patients' prognosis, the combination of 4 factors, considered tumor metabolism, tumor biomarker, systemic inflammation and nutritional status comprehensively, facilitates precision management and prolong the survival in patients with advanced PDAC. Our future work will focus on expand the number of patients and validate its accuracy.