The latest exploration of staging and prognostic classification for pancreatic neuroendocrine tumors: a large population-based study

Conclusions: The rENETS staging system has superior distribution in proportion than the AJCC 7th, ENETS or mENETS staging system, and one more accurate and advanced predictive model will be achieved via the incorporation to be adopted in clinical practice.

Of all pancreatic tumors, pancreatic neuroendocrine tumors (pNETs) only account for 1% to 5% and are rare and highly heterogeneous neuroendocrine tumors1-3. With the attention and technology improvement, the incidence has increased in 2 to 3 fold over the past decades4-6. Due to its peculiarity of occult malignancy and indolent characteristics, pNETs patients have a limited survival outcome with a 5-year survival rate of 80%-90% after resected surgery3, 7, 8. Thus, a powerful and accurate staging system applied for survival prediction and risk stratification is urgently required7, 9, 10.

This study was mainly aimed to obtain a more accurate staging system in a framework of analysis of the application based on ENETS and AJCC 8th N classifications for PDAC. The reformed ENETS (rENETS) staging classification would maintain the ENETS T, M definitions and AJCC 8th N definitions of PDAC and adopt the AJCC 8th staging definitions of PDAC. Combined with the created rENETS staging system, we managed to formulate a novel nomogram to improve the discrimination ability of survival prediction.

One novel prognostic nomogram for OS based on the results of multivariate analysis was established by the rms package in R project. The predictive performance of the nomogram was further measured by concordance index (C-index), calibration curve and decision curve analysis (DCA)21. Bootstraps with 1,200 resample were used for these activities. The predictive comparisons were evaluated by C-index between the established nomogram and other independent index.

According to the whole criteria above, 2,209 patients with histopathological confirmed pNETs from the SEER database were finally enrolled in this study and the detailed clinicopathological characteristics were tabulated in Table 1. In this whole population, there were 1182 males and 1027 females, with a median age of 60 (ranging from 18 to 91). Approximately 80% of patients were Caucasian. The number of patients with a tumor located at the head of pancreas was similar to that at the tail of pancreas. pNETs with only one primary lesion constituted the majority (77.4%) and 83.2% of patients were diagnosed as nonfunctional pNETs. Approximately 85% of patients possessed high and intermediate pathological differentiation. In the decision of therapy, 1557 patients received surgery and 599 patients were not recommended for surgery, while 53 patients were recommended for surgery but somehow not performed. The median survival time was 98.0 months (ranges, 0-131 months). Furthermore, the OS rates at 5, 8 and 10 years were 62.5%, 50.3% and 43.1% respectively. According to the AJCC 7th edition, ENETS stage, mENETS stage and rENETS stage, the number of patients with separate stage was recorded respectively.

Only 3.6% (79 of 2,209) of patients could be classified into stage III tumors on the basis of the AJCC 7th staging classification (Table 1), and stage IIA and stage IIB tumors showed the adverse prognostic trends (Fig. 1a). In addition, the discrimination between stage III and IV diseases was smaller in the first half of survival curve, while it showed similarity between stage II and III diseases in the second half (Fig. 1b). The HR of stage III by multivariable analyses was 2.236, which was comparable to stage IV with HR as 3.194 when compared with stage I tumor (Table 2).

It was awful that all survival curves except stage IV disease were complex and disordered. The overlaps were noticed between the ENETS classification of stage I, IIA and IIB disease, and between stage IIIA and IIIB disease which was even upside down (Fig. 1c). Furthermore, it was obvious that stage I and II disease couldn't be distinguished from each other (Fig. 1d) and no statistical significance was analyzed with HR by a multivariable analysis between stage I and II disease (HR, 1.338; P =0.154; Table 2). 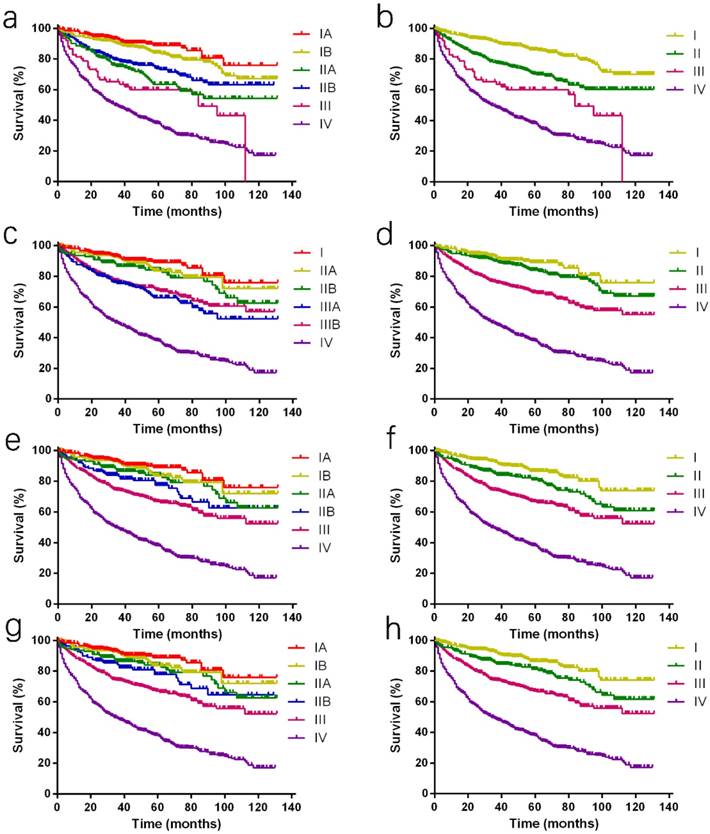 The calibration plot for the probability of OS at 5,8,10 years showed optimal consistency between the observed OS and nomogram-predicted OS (Fig. 3a-c). The C-index of the formulated nomogram for OS prediction was 0.821 higher than that of the rENETS staging system or grade alone (0.710 and 0.689, respectively; Table 3).

Prognostic nomogram analysis for pNETS. The nomogram predicts OS in patients with pNETs (to use the nomogram, an individual patient's value is located on each variable axis, and a line is drawn upwards to determine the number of points received for each variable value. The sum of these number is located on the total points axis, and a line is drawn downwards to the survival axes to determine the likelihood of 5-, 8-, 10-year OS). pNETS, pancreatic neuroendocrine tumors; OS, overall survival; rENETS, reformed European Neuroendocrine Tumor Society. 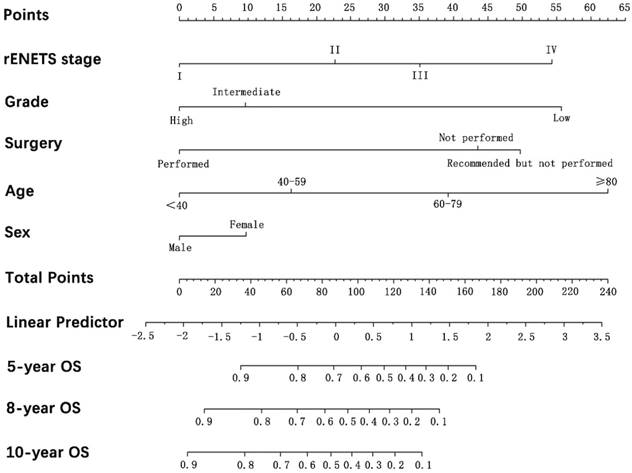 Controversy still remains on whether the patients' survival is related to lymph node metastasis24-27. Although Krampit et al.25 had considered the links between the number of lymph nodes and survival, he just applied two lymph nodes as the cut-off value, which was limited and blurry. One major character of pNETs was its tendency of metastasis and recurrence, and many studies confirmed that distant metastasis could promote nodal metastasis and unfavorably influenced the survival of pNET patients28-30. In our study, stage IV disease accounted for more than 30%, showing the necessity of ideal nodal substage for pNTEs. The N classification in AJCC 8th staging system performed better in risk stratification of pancreatic ademocarcinoma20, so was the incorporation of AJCC 8th N-stage revision into the ENETS staging system performed superior prediction in survival of pNET patients. In a previous study, Luo et al.31 had illustrated the significance of N classification in pNETs patients, however, one single study is unlikely to provide enough information to illustrate the efficacy of the chosen N classification, which even possibly could lead to selection bias. The AJCC 8th N classification was widely used in pancreatic tumor and confirmed its validity. A highlighted improvement was obtained with our revised rENETS staging system and more clinical decisions may benefit from it.

Prognostic calibration curves and decision curve analysis for pNETS. The calibration curves predict OS at 5 years (a), 8 years (b) and 10 years (c) in the patient with pNETs. Decision curve analyses depict the clinical net benefit in pairwise comparisons across the different models. Nomogram is compared with the rENETS staging system in terms of 5-(d), 8-(e), 10-year(f) OS in the patient with pNETs. Dashed lines indicate the net benefit of the predictive models across a range of threshold probabilities (black: nomogram; red: rENETS staging system+G; green: rENETS staging system. The horizontal solid black line represents the assumptions that no patient will experience the event, and the solid grey line represents the assumption that all patients will experience the event. On decision curve analysis, the nomograms showed superior net benefit compared with rENETS+G and rENETS staging system across a wider range of threshold probabilities. pNETS, pancreatic neuroendocrine tumors; OS, overall survival; rENETS, reformed European Neuroendocrine Tumor Society. 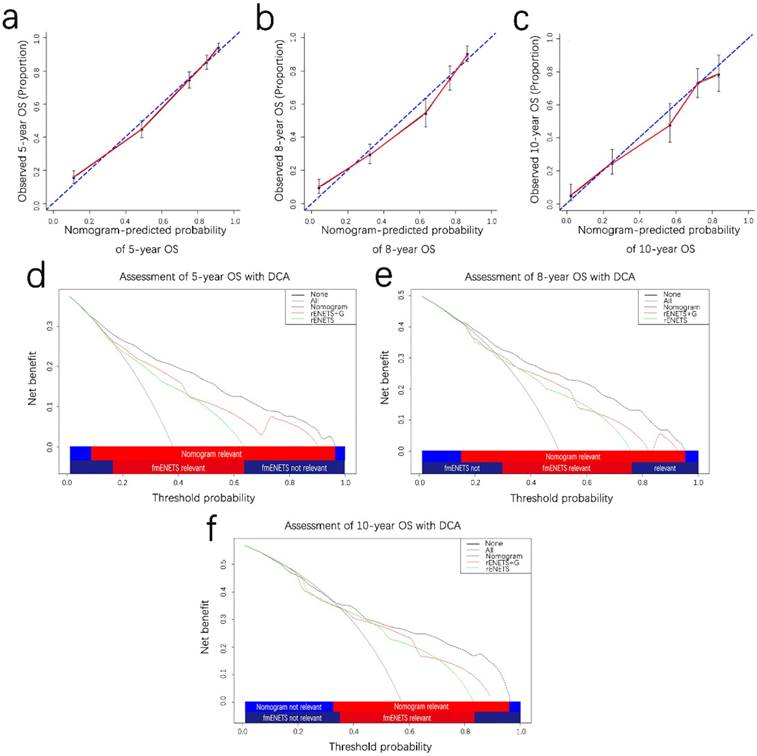 Except the TNM staging system, there are a plethora of other indicators for the prognosis of pNET patients. Through our analysis, the grade, surgery, age and sex were independent predictors for OS, consistent to the previous reports27, 32. Grade reflected tumor biological behavior and was closely connected to its prognosis33. Lianyuan et al.34 had confirmed that surgical resection of primary lesion was associated with OS (P=0.025) benefit as well as other studies35. Non-resection was a potential risk factor associated with poor survival. From the constructed nomogram, we found the pNET patients who had tumor resected obtained better survival. Intriguingly, the patients who was recommended with surgery but not performed finally had higher risk than those was not recommended, which suggested reduction in tumor load was significant to survival of pNETs. The age, surgery, grade and TNM staging system were all attributed in high risk factors with wider range of points. However, sex as an independent predictor had relatively lower risk.

Validation of the formulated nomogram was significant to avoid overfitting of the model and reveal the representativeness36. In this study, calibration curves showed a superior consistency between nomogram-predicted and actually observed probability, and DCA revealed superior clinical benefit with a wider range of threshold probability, which could guarantee the reliability of the formulated nomogram. Its limitations were retrospective in nature and lack of blood serum indices and specific proteins, so prospective multicenter clinical trials should be carried out to make further efforts in validating our results and comparing to other models.

In conclusion, the novel rENETS staging system showed excellent performance in the risk stratification and the formulated nomogram could obtain a wider range in prognostic prediction for pNETs.

The primary and processed data were downloaded from SEER database. All SEER data were available with no restriction in presentations or publications according to its guidelines.

10. Kloppel G, Rindi G, Perren A. et al. The ENETS and AJCC/UICC TNM classifications of the neuroendocrine tumors of the gastrointestinal tract and the pancreas: a statement. Virchows Arch. 2010;456:595-7