Purpose: To demonstrate the relationship between the etiologies of increased diffuse bone marrow (BM) 18F-FDG uptake and PET/CT imaging/clinical features, as well as to explore a predicting model of BM malignant infiltration (MI) based on decision tree.

Methods: 84 patients with increased diffuse BM uptake were retrospectively enrolled. Their complete case record and PET/CT images were reviewed, with the maximal standardized uptake values of bone marrow (SUVmaxBM) and other imaging/clinical features were noted. At the same time, the differences in imaging/clinical features between bone marrow MI and non-MI groups were compared. The decision tree for predicting MI was established by C5.0 component of SPSS Clementine.

Results: In patients with homogenously increased BM uptake, 21 patients had MI resulted from leukemia, lymphoma and small cell lung cancer (SCLC). MI group had higher SUVmaxBM than non-MI group (6.7±3.1 vs 4.2±0.9, p=0.001). However, a considerable proportion of MI patients had similar SUVmaxBM to non-MI patients, which were mainly seen in lymphoplasmacytic lymphoma/Waldenström macroglobulinemia (LPL/WM), chronic myeloid leukemia (CML) and multiple myeloma (MM). There were significant differences in other factors between the two groups. MI patients were highly associated with SUVmaxAP/AX≥1 (the ratio of SUVmaxBM of appendicular skeleton to that of axial skeleton), hepatosplenomegaly, older age and lower rate of fever. The decision tree combining SUVmaxBM, SUVmaxAP/AX, fever and hepatosplenomegaly achieved a sensitivity of 81.0%, a specificity of 98.4% and an accuracy of 94.0% for predicting MI.

Conclusion: Increased diffuse BM 18F-FDG uptake can be attributed to both bone marrow MI and benign etiologies. A decision tree based on C5.0 algorithm, combining PET/CT imaging and clinical features, is of potential use in discriminating BM malignant infiltration from patients with increased diffuse BM uptake.

18F-FDG is the main radioactive tracer used in PET/CT imaging in detecting the elevated metabolic level that is a hallmark of cancer [1]. It has been widely used in the diagnosis of malignancies. However, increased FDG accumulation doesn't necessarily imply malignant tumors. It can also be caused by a variety of increased metabolic states, thus sometimes leading to false positive.

In this study, we use C5.0 to establish a decision tree to diagnose BM malignant infiltration. C5.0 is a top-down induction algorithm. It selects an attribute that best separates the classes of data to build a decision tree [13]. The present study is aimed at exploring a predicting model for increased diffuse BM uptake based on the decision tree, and evaluating the ability of the model in discriminating patients with high risk of bone marrow malignant infiltration.

The study has been approved by the institutional review board of Ren Ji Hospital, School of Medicine, Shanghai Jiao Tong University. Maximum intensity projection (MIP) images from the PET/CT imaging database, between 2012 and 2015, were reviewed. Totally, 14304 MIP images were reviewed, and 483 patients exhibited diffuse BM pattern. The inclusion criteria were as follows: the FDG uptake on BM was diffusely increased (higher than that on normal liver); no recent administration of hematopoietic cytokines before PET/CT examinations; bone marrow biopsy was done within one week; complete case records and clinical follow-up of at least 6 months were available. 297 patients were excluded due to recent administration of hematopoietic cytokines, and 32 patients were due to the loss of follow-up. 70 patients did not receive BM biopsy and were also be excluded. Finally 84 patients (mean age, 49 years; age range, 18-80 years) were enrolled in the present study. There were 41 men (mean age, 51 years; age range, 18-78 years) and 43 women (mean age, 48 years; age range, 19-80 years). There was no significant difference in age between men and women (p=0.326). The bone marrow MI was confirmed by BMB. The types of leukemia were confirmed by morphology, immunology, cytogenetics and molecular (MICM). Patients with no positive BMB results nor disease progress in clinical follow-up of at least 6 months were considered to have no bone marrow MI.

All PET/CT images were acquired by dedicated PET/CT scanner (Biograph 64 rows of PET/CT; Siemens, Germany). All patients received an intravenous injection of 18F FDG (0.1mCi/kg, 3.7MBq/kg) after fasting for at least six hours. Blood glucose was measured before the injection to confirm it was lower than 7.0 mmol/L. PET/CT scans were performed about 50 minutes post-injection. CT scans were acquired 120 kV and 140 mA with a section width of 5.0 mm. PET images were reconstructed iteratively with CT data for attenuation correction.

The 18F-FDG PET/CT images were independently analyzed by two experienced nuclear medicine physicians blinded from any clinical information. SUVmaxBM was measured on axial, appendicular skeleton and normal liver. When measuring SUVmaxBM, we excluded the bone regions with the degenerative changes in the region of interest (ROI). SUVmaxAP/AX, as was defined above, and SUVmaxBM/Liver (the ration of SUVmax of BM to that of normal liver in the same patient), were calculated. The obvious hepatosplenomegaly was also recorded.

The data were presented as mean±SD. The differences in imaging and clinical features between two groups were compared by Pearson's chi-square test and two-sided t test. ROC curve was used to estimate cutoff values for diagnosis. P<0.05 was considered to be statistically significant. All the statistical analyses above were conducted by SPSS version 20.0 (IBM corporation, NY, USA). The decision tree in our study was built by C5.0 component of SPSS Clementine version 12.0 (SPSS Inc., Chicago, IL, USA).

Imaging and clinical features in relation to BM malignant infiltration

PET/CT metabolic parameters including SUVmaxBM and SUVmaxBM/Liver were summarized in TABLE 3. The receiver operating characteristic (ROC) curve showed that SUVmaxBM had higher area under curve (AUC) for diagnosing bone marrow MI (AUC=0.772, 95%CI: 0.645-0.899) with the best cutoff value of 6.15. Using SUVmaxBM of 6.15, the sensitivity and specificity for diagnosing MI were 47.6% (10/21) and 100% (63/63). Figure 1 shows two patients diagnosed with acute lymphoblastic leukemia and bone marrow hyperplasia, in which the SUVmaxBM were 9.1 and 4.5, respectively.

Because of the relatively low sensitivity in SUVmaxBM, we argued whether there were other imaging features that can help in increasing the sensitivity. Table 3 revealed that half of the MI patients did not have great FDG accumulation in bone marrow. We found Lymphoplasmacytic lymphoma/Waldenström macroglobulinemia, chronic myeloid leukemia and multiple myeloma had a considerable proportion of patients with SUVmaxBM lower than the cutoff value. Figure 2 exhibits the PET image of a patient diagnosed with LPL/WM. The PET images before chemotherapy showed increased diffuse BM uptake in axial and appendicular skeleton with SUVmaxBM of 3.7 (Figure 2A). After the chemotherapy, we've seen no increased diffuse BM uptake (Figure 2B). As the SUVmaxBM seemed to be dependent on diseases, we then divided the MI patients into two groups (group C and group D in Figure 3) to compare their SUVmaxBM. Although MI group had higher SUVmaxBM than non-MI groups, group C (including 4 LPL/WM, 2 CML and 3 MM with bone marrow MI) had similar SUVmaxBM to non-MI group (4.7±1.1 vs 4.2±0.9, p=0.197) (Figure 3). 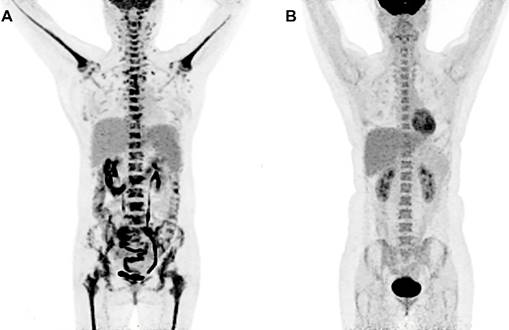 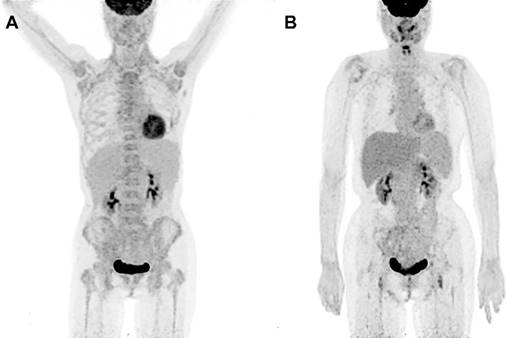 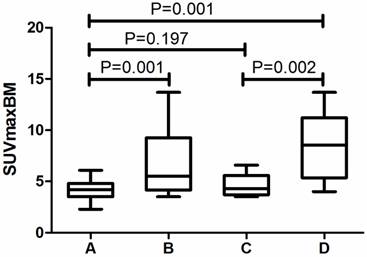 A model for predicting bone marrow malignant infiltration based on decision tree. It was executed by C5.0 component of SPSS Clementine.

Our results demonstrated that MI patients had higher SUVmaxBM than non-MI patients, which was consistent with the previous study [11]. SUVmaxBM has a high specificity (100%) and a low sensitivity (47.6%). Alam's research also reported similar sensitivity and specificity, shown as 95.7% and 43.3%, respectively [11]. The MI patients with SUVmaxBM lower than the cut off value in our study mainly included CML, LPL/WM and multiple myeloma, accounting for 63.6%. We found no significant difference in SUVmaxBM between the MI patients diagnosed with the above three diseases and the non-MI patients. Therefore, using only the SUVmaxBM is not enough to identify MI. Some studies had also revealed the low sensitivity of PET/CT to detect BM involvement of indolent NHL especially the diffuse type of involvement [14-16]. Nakajo et al reported the mildly diffuse bone marrow uptake of two patients with chronic myeloid leukemia [17]. The low SUVmaxBM could be explained by the relatively low FDG accumulation per cell and the low-density marrow infiltration [16, 18].

Other diagnostic influential factors included hepatosplenomegaly, age and fever. Using these characteristics, we executed a decision tree by C5.0 component of SPSS Clementine. According to the decision tree, we found that the SUVmaxBM could be separated into three parts. Firstly, SUVmaxBM>6.1 was considered as a dangerous zone, in which all the patients had bone marrow MI (10/10,100%). The study conducted by Alam also reported that 'super bone marrow uptake' was a highly specific indicator for diagnosing MI, which is consistent with our study [11]. Secondly, SUVmaxBM between 3.4 and 6.1 is classified into a grey zone, in which 15.4%(11/71) of the patients had bone marrow MI and BMB should be selectively conducted to confirm BM malignant infiltration. In the grey zone, SUVmaxAP/AX<1 was considered a protective factor since nearly all patients with FDG accumulation mainly in axial skeleton had no malignant infiltration while in patients with SUVmaxAP/AX≥1, MI made up 40.9% (9/22). For these patients, other characteristics should be taken into consideration. Patients with fever had no malignant infiltration (4/4,100%). The relationship between increased BM uptake and inflammation/infection has been reported [6, 20, 21]. In patients without fever, hepatosplenomegaly is a risk factor as 87.5% (7/8) patients with hepatosplenomegaly has MI. Lastly, SUVmaxBM≤3.4 fell into a safe zone. All patients from the safe zone had no BM infiltration and BMB could be safely omitted. Interestingly, Salaun et al also reported that, in Hodgkin's lymphoma, no bone marrow MI was found in patients with SUVmax below 3.4 [6]. In conclusion, the decision tree best separated the patients with increased diffuse BM uptake, and provided clinicians with a diagnostic strategy for these patients.

Our study generated important findings in evaluating the diagnostic value of the imaging and clinical features of patients with increased diffuse BM uptake, and depicting a predicting model in the form of decision tree. Nonetheless, this study also has some limitations. Firstly, our study is a retrospective study with inevitable selection bias, and the sample size is relatively small. Secondly, the sample is heterogeneous, with patients diagnosed as a variety of diseases. Lastly, the predicting model is not perfect, as the application of decision tree may be difficult.

We would like to acknowledge Mrs. Yan Li from Department of Nuclear Medicine, Ren Ji Hospital, School of Medicine, Shanghai Jiao Tong University for help with polishing our article.