Purpose: We aimed to evaluate the effect of bevacizumab in metastatic CRC (colorectal cancer) regarding to microsatellite instability (MSI) and the sidedness of the primary tumor.

Results: MSI-high (MSI-H) was detected in 4.3% of analyzed patients. Characteristics of patients, with the exception of BRAF mutational status, were generally similar between those with right- (RC) and left-sided colon cancer (LC). Right-sided tumors were significantly associated with a BRAF mutation (p=0.025). In addition, patient characteristics with a microsatellite stable (MSS) tumor were not different from those with an MSI-H tumor. For all 140 patients, the most commonly used regimen with bevacizumab was capecitabine plus oxaliplain (XELOX), irrespective of treatment line, followed by 5-fluorouracil, leucovorin, and irinotecan (FOLFIRI), 5-fluorouracil, leucovorin, and oxaliplatin (FOLFOX), intravenous 5-fluorouracil (5-FU) and capecitabine plus irinotecan (XELIRI). There was no significant difference between the MSI-H and MSS groups in treatment efficacy, including response rate (RR) and disease control rate (DCR). There was also no difference in RR and DCR according to the sidedness of the primary tumor. No significant difference in progression-free survival (PFS) was observed between MSI-H and MSS groups (5.93 months vs. 7.37 months; p=0.801) or between LC and RC groups (7.37 months vs. 5.83 months; p=0.801).

Conclusions: The effect of bevacizumab was not different between LC and RC and between MSS and the MSI-H tumors.

Colorectal cancer (CRC) is the fourth most common cancer in males and third in females worldwide[1]. Although gains remain modest, survival has improved in metastatic CRC during the last two decades, partly as a result of the introduction of newly developed molecularly targeted agents such as bevacizumab, which targets vascular endothelial growth factor (VEGF-A), and cetuximab and panitumumab, which target epithelial growth factor receptor (EGFR) [2-4]. The Food and Drug Administration (FDA) approved bevacizumab for first-line treatment of metastatic CRC when combined with conventional chemotherapy based on the survival benefit which was shown in a landmark trial [3]. VEGF is an important regulator of physiologic and pathologic angiogenesis and is overexpressed in many cancer types [5]. Angiogenesis is also linked to the immune system and anti-angiogenesis treatment can stimulate the immune system. VEGF secreted by mouse tumor cells prevents dendritic cells from maturing, hampering the presentation of tumor antigen and blocking the anti-tumor immune response.

CRC occurs either sporadic cases (85%), as part of a hereditary cancer syndrome (less than 10%), or on the grounds of inflammatory bowel disease. It is widely accepted that adenoma-carcinoma sequence underlies the development of colorectal cancer in most patients, and two specific pathways have been identified based on microsatellite instability (MSI) and chromosomal instability (CIN) [6,7]. The MSI pathway as one form of genomic instability, which affects the nucleotide mismatch recognition and repair system [8,9]. 10 to 15% of all sporadic CRC shows mismatch repair deficiency[10]. MSI in sporadic CRC often associated with the loss of expression of a mismatch repair gene (most commonly MLH1 and MSH2) which caused by epigenetic silencing [11,12]. MSI-High (MSI-H) colorectal cancers are known to have poor prognostic feature such as deep tumor invasion and poor histologic differentiation. However, patients with MSI-H tumors have longer overall and cancer-specific survival than stage-matched patients with tumors exhibiting CIN, implying that the pronounced genetic instability of tumor cells with MSI may increase susceptibility to apoptosis[13,14]. MSI-H colorectal cancers are more commonly located on the right side [9,15]. Accordingly, cancer of the left and right sides of the colon differs with respect to epidemiology, biology, microenvironment and clinical outcomes [16,17]. In addition to MSI status, there are many differences in molecular features between left and right-sided colon cancer. Recently, the sidedness of the primary tumor (right versus left side) has been investigated for its role in helping to prognosticate and predict outcomes [18,19].

Herein, we evaluated the effect of bevacizumab according to MSI status and the sidedness of the primary tumor in metastatic CRC patients.

We analyzed 140 CRC patients who were available for evaluation of MSI status and had been treated with bevacizumab-containing chemotherapy at Samsung Medical Center, Seoul, Korea between April 2008 and January 2013. The following clinicopathologic characteristics were collected for all 140 patients: age, gender, primary site, number of metastatic sites, Kirsten-ras (KRAS) mutational status, BRAF mutation status and information on chemotherapy. All patients had pathologically or cytologically proven metastatic or recurrent CRC. The left side of the colon was defined as the descending colon, sigmoid colon, and rectum and the right side of the colon was defined as the cecum and ascending colon.

Primary tissue specimens were obtained during surgery or endoscopic procedures. Laboratory analysis was conducted at Samsung Medical Center. MSI was analyzed by polymerase chain reaction (PCR) amplification using fluorescent dye-labeled primers for the Bethesda markers (BAT-26, BAT-25, D5S346, D2S123 and D17S250) specific for microsatellite loci, as recommended by the National Cancer Institute Workshop on MSI [9]. MSI was defined as a band shift in either of the two alleles or as the appearance of a differently sized band in the tumor sample. Tumors were classified by MSI-H if instability was found at all of the loci screened, MSI-low (MSI-L) if at least one but not all of the loci showed instability, and microsatellite stable (MSS or MSI-S) if all loci were stable.

Descriptive statistics were reported as proportions and medians. Treatment outcomes were response rate (RR) and progression-free survival (PFS). Tumor response was determined according to RECIST ver. 1.0. PFS was defined as the time from the start date of the bevacizumab-based chemotherapy to the date of disease progression or death from any cause. PFS was estimated using the Kaplan-Meier method with log-rank analysis. A two-sided p-value of less than 0.05 was considered significant. All analyses were performed using SPSS version 19.0 (SPSS Inc., Chicago, IL, USA). The chi-square test or Fisher's exact test was used as appropriate to compare categorical variables. Two-sided null hypotheses of no difference were rejected if p-values were less than 0.05, or, equivalently, if the 95% confidence intervals (CIs) of risk point estimates excluded 1. Cox proportional hazards regression modeling was employed in univariate analyses to identify the significant independent prognostic factors of various clinical parameters for survival.

Among patients with metastatic CRC who were managed at Samsung Medical Center between June 2013 and March 2016, 140 CRC patients with bevacizumab-containing therapy and the information for microsatellite instability were analyzed in this study. All patients had received bevacizumab-containing therapies during their treatment course. MSI-H was detected in 4.3% of analyzed patients. A summary of patient characteristics according to primary tumor site and MSl status is shown in Table 1. KRAS mutational status was available in all 140 patients, but BRAF mutational status was only available in 74 patients (52.9%). Characteristics of patients, except the BRAF mutational status, were generally similar between the right (RC) and the left-sided colon cancer (LC). Right-sided tumors were significantly associated with a BRAF mutation (p=0.025). In addition, patient characteristics did not differ between those with an MSS tumor compared to an MSI-H tumor. Among the 6 MSI-H patients, MSI-H tumors were more frequently observed with female gender, under 65 years of age, LC and the wild type of KRAS. 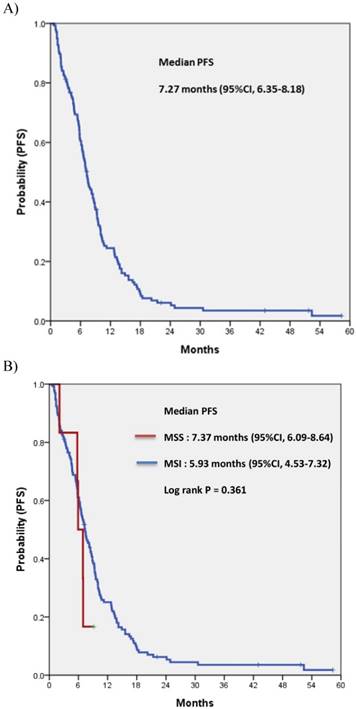 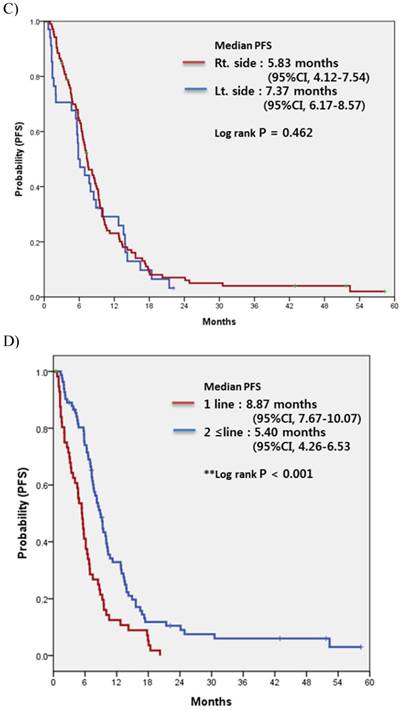 The use of next generation sequencing (NGS) for high throughput genomic analysis has accelerated our understanding of the molecular characteristics of CRC [20,21]. Several groups have reported on the molecular classification of CRC using genomic data from NGS; in some cases, these subtypes have provided predictive or prognostic information. Recently, among advances of genomic analysis in CRC, the sidedness of tumors (LC vs. RC) and MSI-H tumors have been highlighted. The present study analyzed the effect of bevacizumab according to MSI status and sidedness of the primary tumor in metastatic CRC patients. Based on our analysis, the effect of bevacizumab was not different between patients with LC and RC or MSS and MSI-H tumors.

A number of differences have been established between RC and LC. RC are more likely to be exophytic, diploid, mucinous in histology, predominantly MSI-H and contain RAS/RAF mutants, whereas LC are often infiltrating lesions, present with obstructive symptoms, are aneuploid and have predominant chromosomal instability [22,23]. A difference in OS between LC and RC has been reported inconsistently [16,24]. Some studies have shown that OS is significantly worse in RC compared to LC, while others have found no difference. In the present study, RC was significantly related to BRAF mutation as compared to the left side. In patients treated with bevacizumab-containing chemotherapy, there was no evidence of a difference in PFS based on different primary tumor locations. Tumor location within colon cancer is known as a strong predictor of PFS benefit from cetuximab therapy[18,25]. Unlike cetuximab, we found that bevacizumab-containing chemotherapy had a similar antitumor effect irrespective of primary tumor location. Bevacizumab targets the vascular endothelial growth factor (VEGF-A). Tissue expression of VEGF-A has also been demonstrated to vary depending on the location of the primary tumor, with higher expression observed in tumors from the left side than in tumors from the right side[26]. Thus, theoretically, bevacizumab may be more effective in left-sided tumors. However, we found no evidence to support this concept, possibly due to a heterogeneous patient population and other clinico-molecular variables.

MSI-H tumors are more frequently observed in female patients and more commonly located proximal to the splenic flexure, and known to be associated with many features that generally represents poor prognosis, including deep tumor invasion and poor histologic differentiation[9,15,27]. MSI-H tumors are also hypermutated and express abundant frameshift peptides that serve as neoantigens to elicit a brisk immune response characterized by abundant tumor-infiltrating lymphocytes[28]. Previous studies of adjuvant chemotherapy in stage II or III colon cancer demonstrated that patients with MSI-H received no benefit from a regimen containing FU, unlike patients whose tumors with CIN[29,30]. However, the clinical impact of MSI status on treatment response to bevacizumab-containing regimen in metastatic CRC has not been evaluated. This analysis showed that the efficacy of bevacizumab-containing therapy was not statistically different between MSI-H and MSS tumors. Of course, this finding must be interpreted with caution. Due to inherent bias from a retrospective design with many confounding factors and the rather small sample size found in our study, prospective validation of any prognostic or predictive capacity of MSI status should be performed.

RC and LC are now recognized to have distinct clinical and genomic features. Similarly, MSI-H and MSS tumors are also regarded as two different heterogeneous entities. These heterogeneities must be reflected to stratify patients in order to realize a personalized medicine approach in CRC. In particular, bevacizumab is considered an important treatment option in metastatic CRC. However, despite intense research efforts, no predictor has yet been found that can identify patients who would benefit from bevacizumab therapy. The cost and toxicity of bevacizumab emphasize the need for predictive markers for both efficacy and toxicity.

In the era of personalized medicine, being able to establish preferred treatment strategies based on RC versus LC and/or MSI-H versus MSS tumors may improve treatment outcomes and allow for more effective targeted therapy among CRC patients.