Materials and methods: Demographic and clinicopathologic parameters were collected from 38 patients who continued crizotinib therapy beyond Response Evaluation Criteria in Solid Tumors (RECIST)-defined PD and analyzed. After adjusting for potential confounding factors, factors influencing the time from RECIST-PD to crizotinib discontinuation (progress-free survival 2, PFS2) were analyzed.

Conclusion: Continuation of crizotinib therapy after RECIST-PD in Chinese NSCLC patients with positive ALK/ROS1 mutations is feasible in clinical practice.

Lung cancer has a high morbidity and mortality rate and is the main cause of global cancer-related deaths [1,2]. In recent years, molecular targeted therapies using tyrosine kinase inhibitors (TKIs) for non-small-cell lung cancer (NSCLC) patients harboring driver gene mutations have made a revolutionary impact on the care of this disease [3-5]. In recent studies, epidermal growth factor receptor (EGFR), anaplastic lymphoma kinase (ALK), and c-ros oncogene 1 (ROS1) have been identified as driver genes of NSCLC [3,5]. ALK gene rearrangements, leading to an in-frame fusion protein with oncogenic activity in vitro with the echinoderm microtubule- associated protein-like 4 (EML4) gene in NSCLC, were discovered in 2007 [6]. ALK rearrangements are identified in a minority of NSCLC cases, occurring in 2% to 7% of all NSCLC patients [7,8]. Additionally, ROS1 rearrangement was found in different types of malignant tumors, including NSCLC [9-11]. ROS1 gene rearrangements have recently been identified and are observed in 1% to 2% of all lung cancer patients [11,12].

Crizotinib is an ATP-competitive small- molecular TKI that targets ALK, ROS1, and c-MET [11,13]. Two randomized Phase III trials (PROFILE 1014 and 1007) have shown that crizotinib showed significant improvements in the objective response rate (ORR), progression-free survival (PFS), and quality of life when compared to cytotoxic chemotherapy in first-line or non-first line settings in ALK-positive advanced NSCLC patients [14,15]. The kinase domains of ALK and ROS1 share about 77% amino-acid identity within ATP-binding sites, indicating a high homology. In the PROFILE 1001 study [16], a total of 50 ROS1-rearranged patients were enrolled. The results indicated that the ORR was 72% (95% CI, 58 to 84) and that the median PFS was 19.2 months (95% CI, 14.4 to not reached), which was similar in clinical efficacy to the ALK-rearranged subgroup.

Response Evaluation Criteria in Solid Tumors (RECIST) is the gold standard and a common approach for tumor therapy evaluation, however it may not be the most appropriate criteria for terminating TKI treatment [17-19]. For example, two single-arm studies of crizotinib in advanced ALK-positive NSCLC, including a phase I trial (PROFILE 1001) and a phase II trial (PROFILE 1005), allowed continuation of crizotinib therapy beyond RECIST-defined progressive disease (PD) in patients who continued to obtain clinical benefits of the drug [20]. Ou et al. conducted a retrospective study in which patients were enrolled from the two clinical trials mentioned above. This study confirmed that continuing ALK inhibition with crizotinib after PD may provide survival benefits to patients with advanced ALK-positive NSCLC [18]. The limited number of patients described of ROS1 mutant may mainly account for the lack of reliable evidence related to continuing ROS1 inhibition with crizotinib after PD in ROS1-rearranged patients [12].

In this study, data on ALK- or ROS1- rearrangement patients with advanced NSCLC, who received oral crizotinib treatment between July 2013 and December 2016 at the Shanghai Chest Hospital, Shanghai Jiao Tong University (Shanghai, China) were retrospectively analyzed. Three weeks of treatment after initial PD was defined as the cut-off for dividing patients into a continuing or discontinuing treatment group (>3 versus ≤3 weeks, respectively). For most patients, this time frame was within one therapy cycle, and doctors generally decided whether to continue crizotinib treatment within this period of time [18]. Prior to initiation of therapy, all patients underwent baseline computed tomography (CT) of the thorax, enhanced magnetic resonance imaging (MRI) of the brain, electrocardiogram (ECG), and abdominal ultrasound.

All patients received crizotinib therapy 250 mg (twice daily) in 28-day cycles, with appropriate dosing adjustments as needed. To evaluate treatment response, CT scans were performed after the first cycle of crizotinib therapy, then subsequently after every 2 cycles. The tumor response was assessed by the RECIST, version 1.1 [19], including complete response (CR), partial response (PR), stable disease (SD), and PD. Additional locoregional therapy was conducted if necessary, depending on the patients' symptoms, and radiological information obtained.

The time from the first dose of crizotinib treatment to the initial imaging evidence of RECIST-defined PD was defined as PFS1. After the disease progressed, crizotinib treatment was continued until unacceptable levels of toxicity were observed or when physician-determined absence of clinical benefits was achieved. The time between the initial imaging evidence of PD and terminating the usage of crizotinib was calculated and defined as PFS2. The cutoff follow-up time for this study was October 31, 2017 (Figure 1). 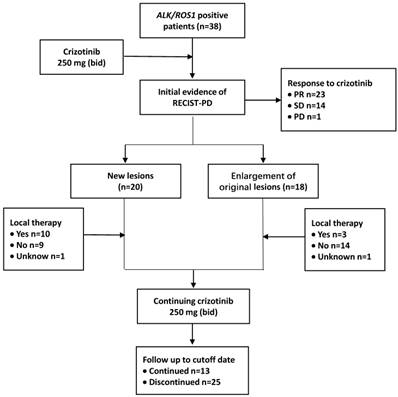 In this study, a total of 38 patients were enrolled. The demographic and clinicopathologic parameters of these patients are presented in Table 1. For all patients, the mean age was 53 years (range 34-73 years); 17 patients (44.7%) were male and 21 patients (55.3%) were female. Patients tended to be never or light smokers (smoking index <400) (31/38; 81.6%), and all patients had a confirmed adenocarcinoma histology. A total of 33 patients (86.8%) harbored ALK-rearrangements, while the remaining patients harbored ROS1-rearrangements. Nearly half of the patients (18/38; 47.4%) were therapy-naive, while 20 patients (52.6%) had received previous anticancer treatments as either a second- or third (or greater)-line therapy prior to crizotinib administration. The performance status of the Eastern Cooperative Oncology Group (ECOG) of 34 patients was 1 (89.5%), and most patients (31/38; 81.6%) suffered from one or two metastatic sites when receiving crizotinib therapy. 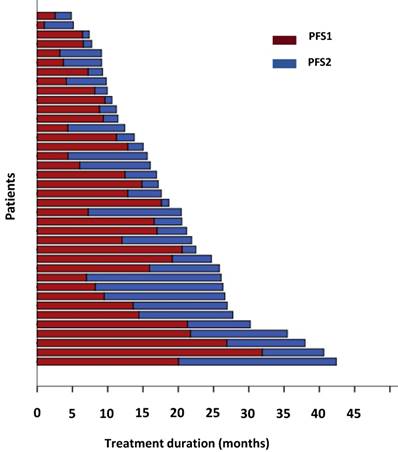 All patients demonstrated RECIST-PD at the study cutoff date. Common disease progression sites included lung (16, 42.1%) and brain (13, 34.2%). In a total of 20 patients (52.6%), PD was confirmed due to the appearance of new lesions, while in the remaining patients (47.4%) enlargement of original lesions was observed. Thirteen patients (34.2%) received locoregional therapy at the time of initial PD. Seven patients with brain progression received palliative brain radiotherapy, and one patient received oral temozolomide instead. Three patients underwent bone radiotherapy, and 1 patient was treated with bone cement on lumbar vertebrae (Table 2).

Univariate survival analysis revealed that the median PFS2 was significantly longer in patients that demonstrated new lesions at the time of PD compared to patients who were attested to enlargement of original lesions (10.0 versus 2.4 months, p = 0.009). The median PFS2 after continuing crizotinib treatment was numerically longer among patients receiving local therapy compared to those who did not receive local therapy, however this difference was not significant (9.9 versus 4.2 months, p = 0.094) (Figure 4a, b). Univariate Cox regression analyses showed that significant independent prognostic factors of PFS2 included new lesions [HR = 0.354 (95% CI 0.156-0.804), p = 0.013] and PFS1 [HR = 0.924 (95% CI 0.863-0.989), p = 0.022]. Moreover, multivariable Cox regression analysis showed that only progression pattern [new lesions versus enlargement of original lesions, HR = 0.329 (95% CI 0.138-0.782), p = 0.012] remained an independent prognostic factor of PFS2 (Table 3). At the study cutoff date, the median overall survival (OS) had not yet been reached.

aFor categorical variables, HR < 1 favors the first category and HR > 1 favors the second category; for continuous variables, for every unit increase in the variable, there was an increase (HR > 1) or decrease (HR < 1) in the risk of death. 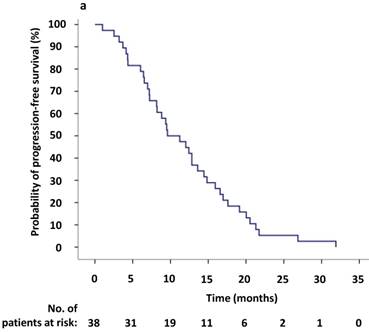 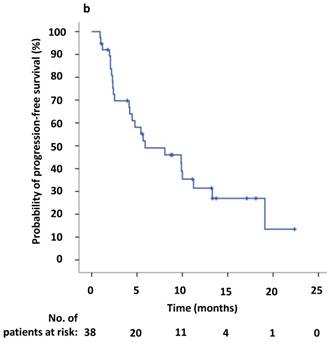 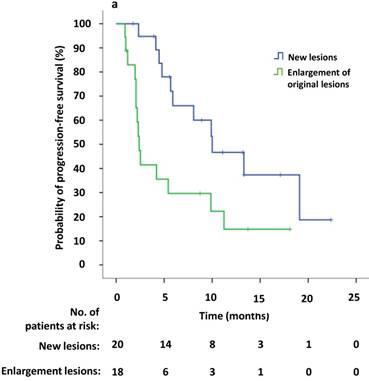 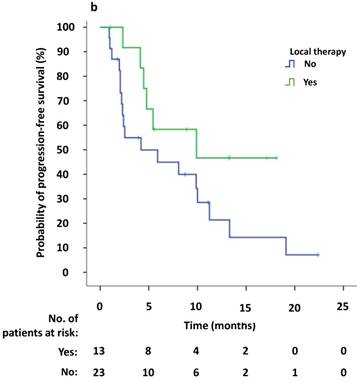 The present study, including 38 advanced NSCLC-harboring ALK or ROS1 mutations, revealed that crizotinib continuation after RECIST-PD was feasible in clinical practice. The median time between the initial imaging evidence of PD and terminating the usage of crizotinib (mPFS2) was nearly 6.0 months. Most patients developed disease progression despite an initial response to TKIs. In recent years, continuing molecularly targeted therapy beyond RECIST-PD by physicians has increased in frequency [18,21-24]. Moreover, several retrospective studies have suggested that molecularly targeted treatment beyond PD may be feasible and effective in patients with EGFR-positive mutations or ALK positive mutations [18,21,22]. Our findings are consistent with the outcomes of several previously published retrospective studies [18,24].

In a retrospective study [24], it was found that patients who received local therapy for disease progression may have longer periods of continuing crizotinib therapy (PFS2). We drew a similar conclusion using univariate survival analysis, however multivariable Cox regression analysis showed that receiving local therapy might not be an independent prognostic factor. Further analysis indicated that in 10 patients (10/13, 76.9%) who received local treatment, PD occurred due to the formation of new lesions, and in 3 patients (3/13, 23.1%) enlargement of original lesions was observed. Given the above findings, we concluded, based on multivariable Cox regression analysis, that new lesions rather than local therapy remained an independent prognostic factor of PFS2. Additional studies are of great necessity due to the limited number of patients enrolled.

At the study cutoff date, eight patients continued crizotinib therapy from the initial imaging evidence of PD for more than twelve months (8/38, 21.1%). Most of these patients (7/8) harbored ALK-rearrangements. In addition, five patients were therapy-naïve. When PD occurred, the disease progression site in four patients was the brain. In six patients, the formation of new lesions confirmed PD, while the other two patients demonstrated enlargement of originally identified lesions. Four patients received locoregional therapy at the time of initial PD. The PFS1 in these patients ranged from 7.0 to 21.7 months. Defining the demographic and clinicopathologic parameters of these patients was constrained by the limited number of patients.

The difference between ALK- and ROS1-positive subgroups treated with crizotinib was noticed by experts as follows: the ROS1-rearranged subgroup had longer responses [median PFS: 19.2 versus 9.7 months; median duration of response (DOR): 49.1 versus 64.5 weeks, respectively] [16,25]. In a retrospective study, it was concluded that the existence of ROS1 rearrangement was not only a predictive factor of crizotinib therapy, but also a prognostic marker for survival since patients with ROS1 rearrangement had a longer median survival (36.7 months) compared to other oncogene mutant populations, for instance EGFR mutation and ALK-positive NSCLC (25.3 and 23.9 months, respectively) [26]. In our study, we found that the median PFS1 was numerically longer in ROS1-mutant patients (13.6 months 95%, CI 11.9-15.3 months) compared to ALK-mutant patients (9.4 months 95%, CI 7.8-11.0 months), however this difference was not statistically significant (p = 0.432). A similar result was observed for the median PFS2 (9.9 months, 95% CI 0-21.4 versus 5.7 months 95%, CI 1.5-9.9, p = 0.495). Five patients with ROS1-positive NSCLC included in the study may attribute to the small number of patients described in ROS1-rearranged NSCLC [12], which apparently reduced accuracy and creditability of the outcomes.

Although most patients with ALK- and ROS1-rearranged NSCLC responded to crizotinib, tumor progression was inevitable after 1 to 2 years of oral treatment. Development of secondary genetic mutations in the primary oncogene (such as L1196M and G1269A in ALK kinase domain, and G2032R in the ROS1 kinase domain), as well as activation of alternative signaling pathways are known as common resistance mechanisms [27-29]. The exact resistance mechanism may sufficiently guide subsequent therapy. Ceritinib and alectinib are two well-known next-generation inhibitors [30-32]. Ceritinib, a highly potent oral ALK and ROS1 TKI, has proven efficacy against crizotinib-resistant ALK mutations, including L1196M, G1269A, I1171T, and S1206Y [30]. Alectinib is also a potent ALK inhibitor that can inhibit several crizotinib-resistant ALK mutations, including L1196M, G1269A, and F1174L). Alectinib is especially suitable for patients with central nervous system (CNS) metastases due to the penetrable features of the CNS [31, 32]. Recently, the latest National Comprehensive Cancer Network (NCCN) guideline (Version 1.2018, www.nccn.org) recommended continuing use of crizotinib or changing to next-generation ALK inhibitors, such as ceritinib, alectinib, and brigatinib for the treatment of ALK-positive patients with solitary lesions or asymptomatic progression to crizotinib. In this study, we found that patients would benefit from continuing crizotinib beyond PD. Therefore, it is necessary to compare next-generation inhibitors and crizotinib continuation treatment after RECIST-PD to investigate optimal treatment effects on patients who were initially receiving crizotinib therapy.

In conclusion, in this retrospective analysis, we demonstrated that ALK/ROS1-positive NSCLC patients received ongoing clinical benefits when continuing ALK and ROS1 inhibition using crizotinib post RECIST-PD. The demographic and clinicopathologic parameters that were described to be related to PFS2 may help physicians in their decision-making process. The main limitation of this study included a small number of patients enrolled on account of the low-level expression in ALK and ROS1-rearranged and discontinuing crizotinib therapy after RECIST-PD in a proportion of patients. Due to the limitations of this study, additional studies are warranted to investigate the underlying mechanisms of disease progression and to define the best therapeutic strategy to ameliorate prognosis of these patients.

This study was supported by the National Nature Science Foundation of China (Grant No. 81472175).