Lung cancer is the leading cause of cancer death after prostate cancer for males and breast cancer for females. There are novel therapies in the past five years such as; tyrosine kinase inhibitors and most recently in the last two years immunotherapy. Immunotherapy is currently being investigated if it can be administered alone or in combination. Previously we have investigated whether immunotherapy compounds can be produced as aerosols, and in the current study we investigated the safety and efficiency independently of the programmed death-ligand 1. The aerosol administration of both cisplatin and nivolumab is possible. The combination of the two drugs has a synergistic effect and therefore should be considered an option. Time of administration for immunotherapy is also very important.

Lung cancer is diagnosed at a late stage due to the lack of symptoms. Although we have novel diagnostic tools such as the radial-ebus and convex-probe-ebus there are no guidelines or screening methods that are globally accepted for early lung cancer screening.[1-7] In the past five years based on the pharmacogenomics of the tumor we have novel therapies such as; tyrosine kinase inhibitors (TKIs) and immunotherapy for lung cancer.[8] Regarding small cell lung cancer we have treatment limitation for now with chemotherapy and radiotherapy.[9-13] Targeted therapy based on the expression of epidermal growth factor receptor (EGFR), anaplastic lymphoma kinase (ALK), and recently for proto-oncogene B-Raf and v-Raf murine sarcoma viral oncogene homolog B (BRAF) and proto-oncogene tyrosine-protein kinase ROS (ROS-1) is available.[14] In the past year immunotherapy with nivolumab and pembrolizumab have been approved as lung cancer treatment for metastatic lung cancer disease.[15] Ipilimumab is another drug that is currently being investigated for lung cancer treatment in combination with other immunotherapy drugs.[16] Aerosol treatment for systematic diseases has been previously established and is being used for diabetes, chronic obstructive pulmonary disease (COPD), cystic fibrosis and pulmonary hypertension.[17-21] Previously we have modified nivolumab, ipilimumab and pembrolizumab to be produced as aerosol. In this study we observed that nivolumab had the smallest aerosol droplet size 1.89μm MMAD. Moreover; in one of our previous publications we have designed and used a cage for BALBC mice in order to administer aerosol therapies.[22] In the current study we will evaluated the safety and efficacy of aerosol nivolumab in a lewis lung carcinoma cell line model.

One hundred BALBC mice age 7-8 weeks old were purchased for the experiment and were divided in five groups. The mice included were isolated (1 per cage) in a temperature-controlled room on 12-hour light-dark cycle and were allowed free access to food and water. The Lewis lung carcinoma cell line was obtained by ATCC (CRL-1642™). The cells were routinely cultured in 25-cm2 tissue culture flasks containing RPMI (ATCC, 30-2002) supplemented with 10% fetal bovine serum (Biochrom) according to the supplier's instruction. The cell line was incubated at 37° C in 5% CO2. The doubling time of the cell line was 21 hours.[23] At confluence, cells were harvested with 0.25% trypsin and then were re-suspended at 1,5×106 cells in 0.15 ml PBS (Phosphate Buffered Saline, Dulbecco, Biochrom) which was injected in the left back foot of the mice. The foot was inoculated subcutaneously (27-guage needle, 1,5×106 cells). The tumor volume was measured once weekly using bidimensional diameters (caliper) with the equation V=1/2ab2, where the a represents the length and b the width (mm3). The tumor was grown on the left back foot of the mice. The animals were randomly divided into five groups of 20, when the tumor volume reached ~100mm3. The mice were divided into five groups as follows: a) control group (no therapy), b) only aerosol nivolumab, c) only aerosol cisplatin, d) aerosol nivolumab and after three days aerosol cisplatin, e) aerosol cisplatin and after three days aerosol nivolumab.

Nivolumab 10mg/ml from Bristol-Myers-Squibb was purchased for the experiment with the dosage being administered at 3mg/kg, and calculated according to the weight of each animal.

The non-specific cytotoxic agent cisplatin/ hospira 100mg/100ml, ONCO-TAIN™, HOSPIRA UK, LIMITED was obtained from our pulmonary oncology department and it was administered according to the AUC calculation.

The jet nebulizer maxineb with the residual cup “J” was used for the administration of aerosol nivolumab and aerosol cisplatin based on our previous experiments.[24] Figure 1. (supplementary data attached to the submission) 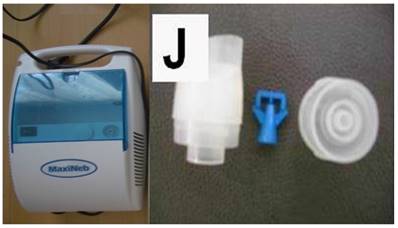 The aerosol administration was performed with a specially designed cage that we have previously used in our experiments.[22, 25]

Initiation of the experiment was done when the tumor volume reached 100mm3, this was observed after two weeks of the cancer line inoculation. In the immunotherapy group the administration was performed every two weeks and in the cisplatin group every 20 days. Regarding the other two groups again we chose to keep the previous mentioned timeline therapy administration. Groups: a) Control Group, B) Immunotherapy Group, c) Cisplatin Group, d) cisplatin prior to immunotherapy with a delay of three days and d) administration of immunotherapy prior to cisplatin with a delay of three days. Median survival: Group A) 15 days, Group B) 42 days, Group C) 39 days, Group D) 58 days and Group E) 51 days. In the control group most of the mice had lung cancer metastasis upon death. In Groups D and E only 7 mice had lung metastasis in total 3/4, however; 12 had liver and peritoneal metastasis 5/7. Figure 2.

Left figure; multiple lung metastasis (white arrows) from a BALBC mice from the control group and right figure lung upon death from a BALBC mouse from group D. 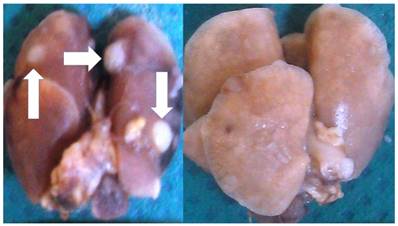 Immunotherapy with the drug nivolumab has a license for now as second line treatment since data of Carbone D.P. et. al. [28] for first line treatment did not present significant results in order for nivolumab to be administered as first line treatment. Pembrolizumab on the other hand has license as first line treatment if the PD-L1 expression is >50% and as second line treatment if PD-L1 expression is > 2%. Nowadays there are ongoing studies were immunotherapy combinations are being studied and moreover; chemotherapy plus immunotherapy. [29-31] Another issue that has to be addressed is whether radiotherapy treatment prior to immunotherapy administration has a favorable synergistic effect for immunotherapy.[32] Indeed current data indicate that administration of radiotherapy enhance immunotherapy treatment, however; the time and dose of radiotherapy administration are yet to be clarified.[33, 34] Radiotherapy is unique as a partner for combination treatments in that it is readily available, unrestricted by patent rights, and part of the standard of care for almost every cancer. The contribution of T cells to radiation-induced tumor control was shown in mouse models over thirty years ago and, more recently, the availability of T cell receptor (TCR)-transgenic mice made it possible to unequivocally demonstrate that radiation can induce priming of T cells to exogenous “model” antigens expressed by tumors. These studies, together with the demonstration that radiation induces immunogenic cell death, have provided proof of principle evidence that radiation can induce tumor-specific T cells.[35-39] The same principle more or less is for chemotherapy. Chemotherapy kills tumor cells, those cells release molecules that can attract T cells to join in the attack. Previous studies presented data where patients who received standard chemotherapy (carboplatin or paclitaxel) before surgery there was significantly more activation of the kind of T cells that attack cancer cells than in the other patients not receiving chemotherapy. It was observed that chemotherapy suppresses the immune system, but weeks after treatment, a large number of T cells was found in the tumor environment.

Just having the T cells clearly isn't enough. It has been observed that surviving tumor cells were disabling the swarming T cells. But immunotherapy such as Merck's pembrolizumab and Bristol-Myers Squibb's ipilimumab can stop tumor cells from doing that. The principle is that a cold tumor like cancer might be turned into a hot, T cell-attracting one and therefore the immunotherapy will become more effective.[40-42]

Major limitation of our study was the unknown status of PD-L1 which plays a crucial role in immunotherapy and furthermore we do not have the status of the tumor mutation burden which plays a crucial role for the efficiency of nivolumab.[28] Based on recent publications we had to decide which was the appropriate time of chemotherapy application and therapy toxicity. Recent studies indicate that chemotherapy administration prior to immunotherapy enhances the immunotherapy treatment, but also chemotherapy treatment after immunotherapy has efficient therapeutic effect.[27, 43] We chose to investigate the treatment schedules. Another challenge was the time of administration which there are no data or suggestions. We chose to administer immunotherapy after three days of the chemotherapy application based on the current knowledge that the drug cisplatin circulates within the body for less than 24 hours and therefore the cytotoxicity effect has already began and it is on its peek at the time of the immunotherapy application. On the other hand certainly immunotherapy has a slower rhythm of efficiency and therefore possibly the application of chemotherapy should be later than the time that we chose. However; at the same time we have to consider the tumor burden and indeed the survival of group E was close to group D. Another limitation of our study was that we did not acquire blood samples in order to check cancer antigen populations and therefore treatment efficiency with this method. In a future experiment of ours we will challenge the time of chemotherapy administration after immunotherapy. Another issue that we have to consider is the different circadian rhythm and hormones that animals have versus humans which also might play a crucial role for immunotherapy.[44]