Background: Nasopharyngeal carcinoma (NPC) remains as a major public health burden in Southern China. Over the last decade, Epstein-Barr virus (EBV) serological detection has been the most promising tool used for NPC screening. The present study aims to evaluate the long-term diagnostic performance of a new NPC screening scheme (probability of NPC units [logit P], PROB≥0.65), and compare this with other EBV seromarkers used within 2009-2015.

Methods: Enzyme-linked immunosorbent assay (ELISA) for EBV capsid antigen (VCA/IgA) and nuclear antigen-1 (EBNA1/IgA) was performed in 16,712 subjects, who were within 30-59 years old.All subjects were followed up for six years. The area under the receiver operating characteristic curve (AUC) and correlation analyses were preformed to evaluate the diagnostic value of different measures. Furthermore, the rates of early diagnosis in NPC patients were statistically analyzed.

Conclusion: The new NPC screening scheme (PROB≥0.65) based on VCA/IgA and EBNA1/IgA outperforms the other seromarkers, and making it the preferred serodiagnostic strategy for long-term NPC screening in high-incidence areas.

Nasopharyngeal carcinoma (NPC) is prevalent in Southern China, and mainly affects the middle-aged population. NPC tends to present at an advanced stage at diagnosis, and has a relatively poor survival rate after diagnosis, because the primary anatomic site of the tumor is located in a silent area, and its symptoms are inconspicuous [1]. Despite the discovery of the very close association of EBV with NPC, the exact role of this virus in NPC development has remained not completely elucidated. EBV serological detection has been the most promising tool used in NPC screening. However, most studies on EBV antibodies have been conducted on the basis of the small pilot cross-sectional study of preliminary NPC screening due to the lake of data obtained from large-scale samples from NPC long-term follow-ups. In the present study, a total of 16,712 participants were enrolled between 2009 and 2010. Enzyme-linked immunosorbent assay (ELISA) for VCA/IgA and EBNA1/IgA were performed for all subjects, and the preliminary results of this serological screening were reported [2,3]. A six-year follow-up survey was carried out up to the end of December 2015. The purpose of the present study was to evaluate the long-term diagnostic performance of the new NPC screening scheme, and compare this with other seromarkers.

A serological follow-up study of NPC in Zhongshan City, Southern China, which is a high-incidence area of NPC, was conducted. A total of 16,712 individuals, who were 30-59 years old, were recruited between August 2009 and July 2010. A follow-up survey was carried out up to the end of December 2015.

Serum samples collected during enrollment and on subsequent occasions, and were tested in separate batches. The samples were stored at 4°C for use within one month, or stored at -80°C for longer periods. Two screening markers, VCA/IgA (Euroimmun, Lubeck, Germany) and EBNA1/IgA (Zhongshan Bio-tech, Zhongshan, China), were tested by ELISA. The levels of these seromarkers were assessed by photometric measurement, according to manufacturers'instructions, and standardized by calculating the ratio of the optical density (OD) of the sample over that of the reference control (rOD). If the specific rOD was greater than 1, the sample was regarded as positive [4].

The new combination of VCA/IgA and EBNA1/IgA was identified, which had a sensitivity of 92.8%, a specificity of 91.6%, and a ROC of 0.97. Then, the prediction formula was developed, as follows: LogitPROB= -3.934+2.203 × VCA/IgA +4.797 × EBNA1/IgA [5]. On the basis of a predefined serologic algorithm, the participants were classified into three subgroups: high-risk (PROB≥0.98), medium-risk (0.98>PROB≥0.65), and low-risk (PROB<0.65). Except for patients diagnosed with NPC, the remaining high-risk and medium-risk subjects were followed-up annually, and blood samples were obtained to examine for EBV-related antibodies. Fiberoptic endoscopy was performed by local otorhinolaryngologists in Zhongshan People's Hospital when the serologic result reached the definition of high-risk. Nasopharyngeal biopsies were also performed when suspicious lesions were observed during the endoscopy procedure. Subjects in the low-risk group were reexamined every four years after the initial round of screening. NPC cases were identified by the research team among the high-risk group. As a complement, these cases were identified through linkage to the cancer registries, annually. NPC diagnoses from the low-risk group were mainly ascertained through the cancer registries. NPC was classified according to the World Health Organization classification [6], and tumor stage was defined according to the 2008 staging system of China [7]. Stage I and II were considered early stages.

The rates for the early diagnosis of NPC were compared using chi-square tests. The efficacy of EBV antibodies was evaluated using the sensitivity, specificity, positive predictive value (PPV), rate of missed diagnosis, Youden index and AUC. All statistical analyses were two-sided. A P-value <0.05 was considered statistically significant. All analyses were performed using SPSS 20.0 software.

Number of subjects tested and NPC detected during the screening

Note: One patient, who was classified as a low-risk population, was identified with NPC through linkage to the cancer registries in 2011, 2013 and 2015, respectively.

Diagnostic values of the new NPC screening scheme (PROB≥0.65) and the other four seromarkers in the preliminary and follow-up study

Zhongshan City in Southern China is one of high-incidence areas of NPC [8]. Since the 1980s, the Research Institute of Zhongshan City has launched several pilot efforts to conduct NPC mass screening by measuring two traditional seromarkers, VCA/IgA and IgA antibodies against EBV early antigen (EA/IgA), by using immunofluorescence assay. The limitations of relatively low PPV, lack of a standardized method, high intraobserver variations, and time-consuming protocols make it less applicable in large-scale population screenings [9]. A previous study [5] used a logistic regression model to identify an optimal biomarker panel to discriminate NPC from controls. It was revealed that the new combination test for VCA/IgA and EBNA1/IgA by ELISA outperformed the traditional NPC screening scheme, in terms of both sensitivity and specificity. The Research Institute of Zhongshan City launched the new serological screening for 16,712 subjects in 2009 and 2010, and a follow-up survey was carried out up to the end of December 2015. The purpose of the present study was to evaluate the long-term diagnostic performance of the new NPC screening scheme, and compare it with other seromarkers.

Diagnostic accuracy of individual and combinations of seromarkers 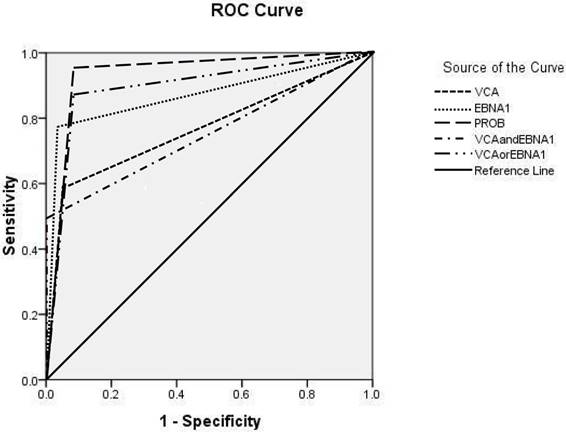 In the serological screening of the present study, 44 NPC patients were detected in high-risk and medium-risk populations in the two screening cycles. Among these patients, 35 patients were in stage I or II. Furthermore, the rate of early diagnosis was 79.5%, which was significantly higher than those in clinic [10]. In the preliminary screening and during the first year of follow-up, the average annual incidence in the cohort was 149.59/105 and 83.90/105, respectively, when compared with the 30-59 year-old general population (29.03/105). This was based on the registered data of the Cancer Institute of Zhongshan City. The screening programme resulted in more diagnosis and early NPCs, when compared to the general population. The overall survival for NPC has increased in recent years [11,12]. Hence, prospective randomized trials are needed to provide sound evidence for the potential effect of screening in reducing NPC-specific mortality [13].

On the basis of the 6-year follow-up period for the NPC screening, the diagnostic value of the new NPC screening scheme (PROB≥0.65) and the other four seromarkers were investigated by ELISA for NPC detection, including VCA/IgA, EBNA1/IgA, VCA/IgA and EBNA1/IgA, and VCA/IgA or EBNA1/IgA. The results revealed that there was no significant difference in the rate of early diagnosis for EBV seromarkers. For individual seromarkers, the diagnostic performance of EBNA1/IgA was superior to VCA/IgA, with an AUC of 0.866, a PPV of 5.3%, and a specificity of 96.2%. However, its sensitivity was only 76.6%, and the rate of missed diagnosis was unsatisfactory. For the combinations of seromarkers, the diagnostic performance of VCA/IgA or EBNA1/IgA was superior to VCA/IgA and EBNA1/IgA, with a sensitivity of 85.1% and a PPV of 2.6%, leading to unnecessary fiberoptic endoscopy, as well as psychological pressures associated with the procedure. The new NPC screening scheme (PROB≥0.65) resulted in a decrease in missed diagnoses for subjects in the NPC screening, with a sensitivity of 95.7%, a specificity of 91.6%, a PPV of 3.1%, and an AUC of 0.926. This increased the accuracy of the large-scale NPC screening, and can be the preferred serodiagnositc strategy for first turn serological screening and the yearly follow-up.

One of the principles for cancer screening is the follow-up. The screening interval for NPC is a controversial issue that has been inadequately evaluated. Rao DP et al. [14] constructed a Markov simulation model based on the natural history of NPC to evaluate different screening interval strategies for NPC screening. In the present study, it was found that 93.6% (44/47) NPCs were detected from high-risk and medium-risk populations. Furthermore, the new serological screening was preferable for NPC screening. However, 38 of 44 (86.4%) NPCs were detected during the preliminary serological screening and the first year of follow-up. The NPC detection rate has been dropping significantly ever since.

The present study has several limitations. First, the screening compliance was unsatisfactory. Second, not all high-risk participants underwent nasopharyngeal endosocopy or biopsy, which may cause bias and impact the final results.

In conclusion, the use of a combined test of EBV antibodies by ELISA is recommended to identify NPC patients. The logistic regression model that combined VCA/IgA with EBNA1/IgA was selected to identify the probability of suffering from NPC. It is reasonable to consider that the new serological screening could increase NPC diagnostic accuracy. However, the diagnostic performance has decreased since the first year of follow-up. Future work is warranted to develop a more reasonable screening interval, in order to enhance NPC screening efficiency in the follow-up protocol [15].

6. Shanmugaratnam K, Sobin LH. The World Health Organization histological classification of tumours of the upper respiratory tract and ear. A commentary on the second edition. Cancer. 1993;71(8):2689-2697