Hepatocellular carcinoma (HCC) is the sixth most common tumor worldwide. The relationship between the gene methylation accumulation and HCC has been widely studied. In our study, we used the Sequenom EpiTYPER assay to investigate the methylation levels of the RASA3 in 164 HCC samples and paired adjacent non-cancerous tissues, and the association between methylation level and clinicopathological features. The methylation level of the RASA3 in HCC samples was found significantly lower than that in the adjacent non-cancerous tissues (P<0.0001). Moreover, the hypomethylation of RASA3 in HCC samples was connected with the presence of tumornecrosis (P=0.029) and alcohol intake (P=0.002). Furthermore, it was found that the expression of RASA3 was significantly decreased in tumor tissues (P=0.0053), which was also correlated with the methylation levels of RASA3 gene. Thus, RASA3 hypomethylation is a common feature in HCC, and may be a potential mechanism for HCC development, and serves as a useful biomarker for the early detection, especially in alcohol-associated HCCs.

Hepatocellular carcinoma (HCC) is the sixth most common malignant tumor and the third leading reason of cancer-related death in the world [1]. The incidence and mortality rates of HCC were increasing in many parts of the world, particularly in Asia [2]. HCC usually has a poor prognosis due to its difficulty of early diagnosis, rapid infiltrating growth and high incidence of metastasis. Hence, the early detection and treatment of HCC has been a severe health problem worldwide.

It is well known that malignant transformation of the hepatocyte is a course of multiple steps associated with various genetic alterations [3]. During its development and progression, DNA methylation plays a dominant role by altering gene expression [4]. Some studies reported that the methylation of tumor suppressor genes was associated with hepatocarcinogenesis in HCC cell lines [5, 6]. The aberrant methylated genes have been reported to act as a useful biomarker for early detection, tumor progression or prognosis of HCC, which displays a promising clinical benefit [4, 7].

For being able to switch between two different conformations, an active GTP-bound state and inactive GDP-bound complex, RAS is thought to be a crucial oncogene in multiple human tumors. Besides genetic mutations and growth-factor-receptor activation, RAS can be activated continuously through the inactivation of RAS GTPase-activating proteins (RAS GAPs), which leads to tumorigenesis [8]. RASA3, a member of the family of GAPs, has been identified as a potential tumor suppressor gene, which correlated with some malignant tumors like colorectal cancer and bladder tumor [9, 10]. Moreover, subtelomeric deletion of chromosome 13 which takes away the RASA3 locus along with other genes, has been reported to be associated with head-and-neck squamous cell carcinoma [11]. Interestingly, belonging to the GAP1 subfamily as same as RASA3, RASAL is reported to be connected with some tumors including HCC through CpG methylation, resulting in aberrant RAS activation [12]. Therefore, we hypothesized that aberrant CpG methylation of RASA3 may constitute a mechanism by which aberrant RAS activation can lead to hepatocarcinogenesis.

From January, 2012 to December, 2012, we collected HCC tissues and paired adjacent noncancerous tissues from 164 patients treated at the Shanghai Eastern Hepatobiliary Surgery Hospital. Their ages were from 22 to 76 years (51.5±10.3 years: means ± standard deviation) and the ratio of male-to-female was 139:25. Serum carcinoembryonic antigen (CEA), alpha-fetoprotein (AFP), and CA19-9 were detected by the electrochemiluminescence immunoassay using cobas E601 immunoassay analyzers (Roche Diagnostics, GmbH, Mannheim, Germany). All tissues we collected were defined as HCC by pathological diagnosis. The diagnosis of the HCC referred to morphology and immunohistochemistry provided by WHO [13]. We performed the immunohistochemistry on 4% formaldehyde fixed tissues. HCCs were made up of tumor cells that generally resemble hepatocytes morphologically. Immunohistochemically, we used Polyclonal antiserum to carcinoembryonic antigen (pCEA), Glypican 3, Hepatocyte Paraffin 1, and CD10 to discriminate HCC from other liver tumors. Grading of the HCCs was referred to the Edmondson-Steiner grading system [14], ranging from grade 1 to 4, based on nuclear and cellular atypia. Tumor sizes were measured in accordance to the size of the largest tumor for multiple masses and the largest dimension of solitary mass.

The clinical characteristics of the HCC patients in this study

The collected tissue samples were frozen in liquid nitrogen immediately and stored at -80˚C until processing. With informed consent of patients, all the tissue samples and associated clinicopathological information were allowed to collect and all the study protocol were approved by the Clinical Research Ethics Boards of the Shanghai Eastern Hepatobiliary Surgery Hospital.

Through PCR amplification, SAP cleanup, T Cleavage and conditioning of the hMC reaction products with Clean Resin steps, the products were transferred to a SpectroCHIP® array and analyzed on the MassARRAY® Analyzer 4 instrument.

We used the SPSS 19.0 to perform the statistical analyses. A p value <0.05 was considered statistically significant. The methylation level changes of RASA3 were analyzed by using paired t-test between HCC tissues and adjacent non-cancerous tissues. We detected the connections between methylation changes and clinical features by using independent-samples T-test. Paired t-test was also conducted to compare the mRNA expression difference between tumors and matched normal tissues.

Methylation level of RASA3 in HCC and adjacent noncancerous tissues

The association between methylation levels of RASA3 promoter in HCC and tumornecrosis (A), alcohol intake (B).

The expression level of RASA3 in HCC and adjacent noncancerous tissues

The RNA sequencing of 11 HCC tissue and their matched normal tissues had been performed in our institution as previously described [15]. In our RNA-seq data set, there was no significant difference between HCC samples and their paired normal tissues (P=0.824, Fig 3A), but the expression of RASA3 showed a trend to be higher in tumor tissues. Then, we proceeded to query RNA-seq data of fifty HCC tissues and paired adjacent noncancerous tissues from the Cancer Genome Atlas (TCGA) dataset. The expression was found significantly decreased in the tumor tissues (P=0.0053, Fig. 3B). From the TCGA data set, we also found most of CpG sites, successfully genotyped by the HumanMethylation450 BeadChip in RASA3 gene, were hypomethylated in HCC (Fig. 3C). The methylation in Amplicon 1 region were decreased significantly, but the methylation in Amplicon 2 region were slightly increased or had no changes, which were consistent with our results in present study. 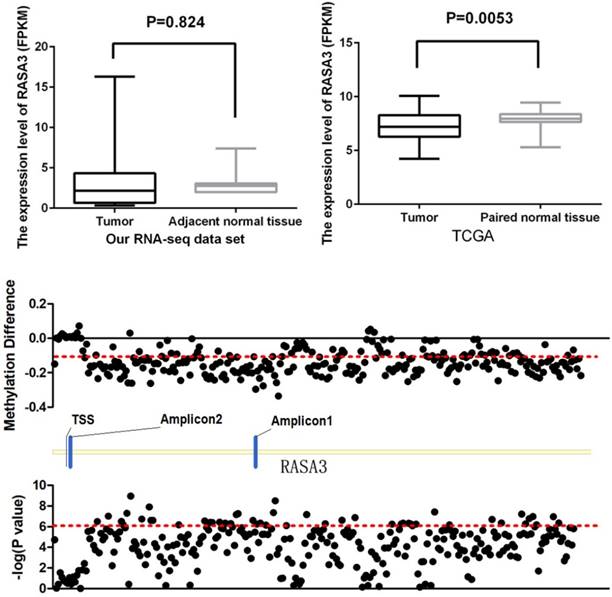 DNA methylation is one of the most often investigated epigenetic mechanism which is involved in various tumors development [16]. Aberrant CpG island methylation of gene plays a significant role in inactivating tumor suppressor genes in human tumors progression including HCC [17]. In the present study, as a potential tumor suppressor gene, the methylation level of RASA3 gene were analyzed in HCCs. Our findings showed that the methylation levels of RASA3 in HCC tissues were significantly hypomethylated than adjacent noncancerous tissues (P<0.0001), and that there were over 6% differences of methylation level between paired tissues (from 6.4% to 17.3%), which indicated this epigenetic change might participate in the development of HCC carcinogenesis. RASA3 hypomethylation may activate RAS protein continuously to promote hepatocarcinogenesis through down-regulating RASA3 expression, which is different from the common viewpoint that hypermethylation of CpG islands tends to be associated with gene silencing. However, some studies have showed that hypermethylation of CpG islands in gene can be significantly associated with activation of some cancer-related genes, challenging the common view [18, 19]. Therefore, further studies should be done to explore the mechanisms between methylation status and the regulation of gene expression including RASA3. 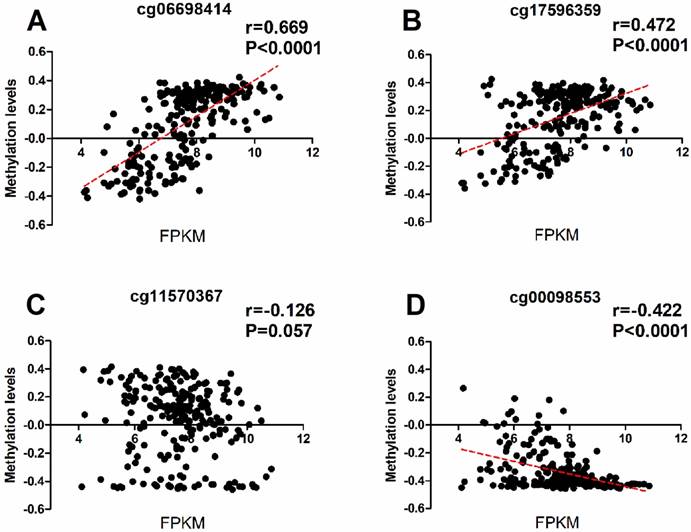 Another important result of our study was that aberrant methylation level of RASA3 promoter was associated with major risk factors for HCC. HCC generally occurs on the basis of chronic inflammation that is secondary to the alcoholism or hepatitis virus infection, which increases the risks for hepatocarcinogenesis. In our study, methylation level of RASA3 was significantly lower in alcohol-associated HCC than in non-alcohol-related HCC indicating that alcohol intake may have a strong influence on RASA3 methylation levels in HCC. Some previous studies have reported a connection between alcohol consumption and aberrant methylation in HCC [20, 21]. Our findings further strengthen the notion that alcohol intake may impact DNA methylation levels in targeted genes, promoting tumor progression by means of an epigenetic mechanism. However, the precise mechanism by which alcohol can promote a reduction in methylation of RASA3 during HCC development remains unclear. Further studies should be done to detect whether alcohol consumption influences RASA3 directly or indirectly.

To our knowledge, abnormally methylated genes in cancer may serve as potential biomarkers for clinical use [22]. Tumor necrosis usually results from the lack of blood supply in the central portion of tumors associated with rapid tumor growth, which indicates worse prognosis and survival in HCC patients. Our results showed that the CpG islands methylation level of RASA3 in HCC samples was lower significantly in patients with tumornecrosis than HCC without tumornecrosis. It may be because RAS protein is activated by hypomethylation of RASA3, which contributed significantly to acceleration of tumor cell growth connected with tumor growth [8, 23]. Thereby the hypomethylation of RASA3 may serve as a prognosis biomarker for HCC. To facilitate clinical application, methylation levels of RASA3 should be further assessed in blood samples. In addition, a variety of methods such as serum AFP and radiographic test can be combined with DNA methylation test to improve its sensitivity and specificity for early diagnosis of HCC.

Hui Lin and Xiaoxiao Fan contributed to the conception of the study, the data analyses and wrote the manuscript.

Xiaoxiao Fan and Lifeng He contributed to deal with Tissue Samples, DNA extraction and Bisulfite conversion.

Daizhan Zhou designed the experiments, collected the samples, performed the bioinformatics analysis, and revised the manuscript.