In recent years, long noncoding RNA (lncRNA) has become a hotspot in the research of life science, especially in oncology. As the progresses of functional studies, lncRNAs have been found to be involved in a variety of human complex diseases, including tumors [5-7]. Accumulating evidences prove lncRNAs play important roles in carcinogenesis by participating in various important cytobiological behaviors, including cell cycle, apoptosis, invasion, autophagy and so on [8-10]. Recent studies reported some lncRNAs could be biomarkers for diagnosis and prognosis as well as therapeutic targets of tumors [11-13].

CDKN2B antisense RNA 1 (CDKN2B-AS) gene is a lncRNA gene identified by Pasmant E in the genetic study of a melanoma-neural system tumor family in 2007, which also named Antisense Noncoding RNA In The INK4 Locus (ANRIL) [14]. Recent studies had found that the CDKN2B-AS gene up-regulated in several malignant tumors, such as hepatocellular carcinoma, nasopharyngeal carcinoma and gallbladder cancer, and acted as an oncogene [15-17]. Zhu H reported that CDKN2B-AS was overexpressed in bladder cancer, and regulated bladder cancer cell proliferation and apoptosis [18], which suggested that CDKN2B-AS might facilitate the tumorigenesis of BUC. However, the function and underlying mechanisms of CDKN2B-AS on chemotherapeutic resistance are still unclear.

In this study, 81 BUC patients were hospitalized and treated in the Department of Urology of Shengjing Hospital from September 2013 to February 2015. BUC tissue specimens were obtained through cystoscopy. The normal urothelial tissue (NUT) specimens were obtained from 34 patients with the same age period undergoing lithocystotomy, cystostomy and suprapubic transvesical prostatectomy. All tissue specimens were diagnosed by two pathologists, and the clinical data were complete. All patients were not treated with radiotherapy or chemotherapy before operation.

Study data and informed consent were obtained in accordance with the Declaration of Helsinki and approved by the Ethics Committee of Shengjing Hospital. All patients were given a written explanation of the study, and they provided their written informed consent before participating.

Gemcitabine-resistant T24/Gem cell line was set up previously through induction with low concentration of Gemcitabine in our laboratory. To maintain the resistant phenotype, T24/Gem cells was cultured with 0.5 μg/mL Gemcitabine (Sigma, USA), and cultured in Gemcitabine-free medium for 7 days prior to experiment.

Total RNA was isolated from tissues and cells using Trizol reagent (Thermo Fisher Scientific, USA), and reverse transcribed into cDNA using lnRcute lncRNA First-Strand cDNA Synthesis Kit (Tiangen, China). The expression of CDKN2B-AS is examined using lnRcute lncRNA qPCR Detection Kit (Tiangen, China) according to manufacturer's instructions. The primers of CDKN2B-AS were 5'- TGCTCTATCCGCCAATCAGG -3' (sense) and 5'- GGGCCTCAGTGGCACATACC -3' (antisense) [19]. The expression of CDKN2B-AS was defined based on the threshold cycle (Ct), and relative expression levels were calculated as 2-ΔΔCT after normalization with reference to expression of β-actin. The primers of β-actin were 5'- GCACCACACCTTCTACAATGAG -3' (sense) and 5'- ACAGCCTGGATGGCTACGT -3' (antisense).

The inhibitor of CDKN2B-AS (smart silencer-CDKN2B-AS, ss-CDKN2B-AS) and its negative control (ss-NC) were designed and synthesized by the Ribobio Company (Guangzhou, China). The full sequence of CTNNB1 was cloned into pUC plasmid to construct pUC-CTNNB1 by Cyagen Biosciences Inc (Santa Clara, USA), and the pUC plasmid was used as negative control (pUC-NC). Transient transfection of smart silencers and plasmids were carried out using Lipofectamine™ 3000 (Thermo Fisher Scientific, USA) in a 12-well culture plates following the manufacturer's instructions.

The cell proliferation of T24/Gem cells was examined using Enhanced Cell Counting Kit-8 (Beyotime, China). The T24/Gem cells in logarithmic growth phase were digested with trypsin, cleaned by PBS, and suspended in the culture medium. Then, 2000 cells in 100 μl medium were added into one pore of 96-well plates, added 10 μl enhanced CCK-8 solution to each pore, and incubated for 1 hours. The absorbance value (450 nm) was detected with a Microplate Reader.

The apoptosis rate of T24/Gem cells was detected using Annexin V-FITC/PI apoptosis detection kit (Jiancheng, China). 2×105 cells were centrifuged with 1000 g for 5 minutes, the supernatant was removed, and 500 µl binding buffer was added to suspend cells gently. 5µl Annexin V-FITC and 5µl PI were added into cell suspension in turn and mixed gently. The cell suspension was incubated at room temperature for 10 minutes, and the apoptosis rate was detected by flow cytometry. Then, the Diva 8.0 software (BD, USA) was used to analysis the apoptosis rate by calculated the percent of cells with FITC-Annexin V positive/PI negative in the right lower quadrant.

T24/Gem cells were treated with Gemcitabine (0.1 μg/mL, 0.5 μg/mL, 1 μg/mL, 5 μg/mL, 10 μg/mL, 20 μg/mL). The cell viability was examined 24 hours later. Then, the half maximal inhibitory concentration (IC50) of Gemcitabine was calculated according to the dose-response curve.

The SPSS 22.0 (IBM, USA) was used for statistical analysis. All data was expressed as mean ±standard deviation and analyzed with one-way ANOVA and Student's t-test. If the P value was less than 0.05, the difference was statistically significant (* and #).

CDKN2B-AS gene was high-expressed in BUC

Compared with NUT specimens, CDKN2B-AS gene was high-expressed significantly in BUC tissues specimens (Fig 1A, P<0.05). The expression of CDKN2B-AS gene in J82 and T24 cells was much higher than that in SV-HUC-1 cells (Fig 1B, P<0.05). 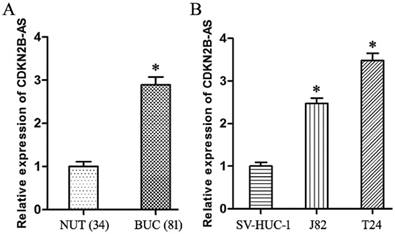 As shown in Table 1, the increased expression of CDKN2B-AS showed the positive correlation with high pathological grade of BUC (P<0.05), but was not correlated with other parameters, including gender, age and smoking history of BUC patients (P>0.05). These founding suggested that CDKN2B-AS gene was involved in the progress of BUC.

Note: * indicated that the difference was statistically significant. P<0.05

Furthermore, the over-expression of CDKN2B-AS was associated with the low sensitivity to Gemcitabine of BUC patients (Table 1, P<0.05), which preliminarily confirmed CDKN2B-AS participated in the genesis of chemotherapy resistance in BUC. 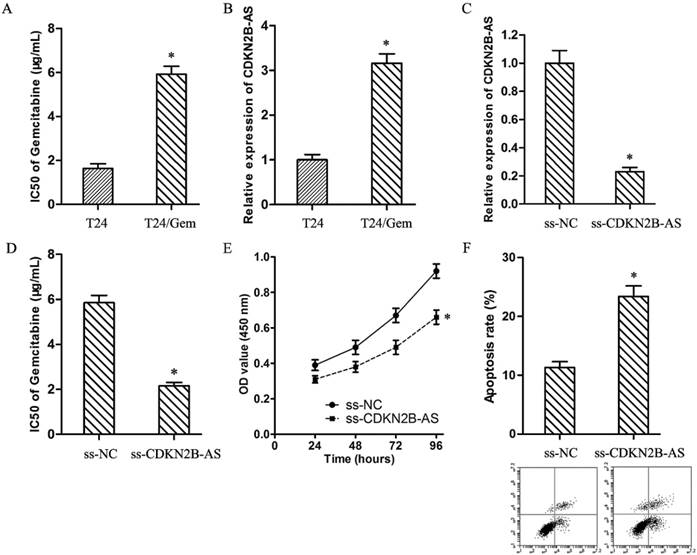 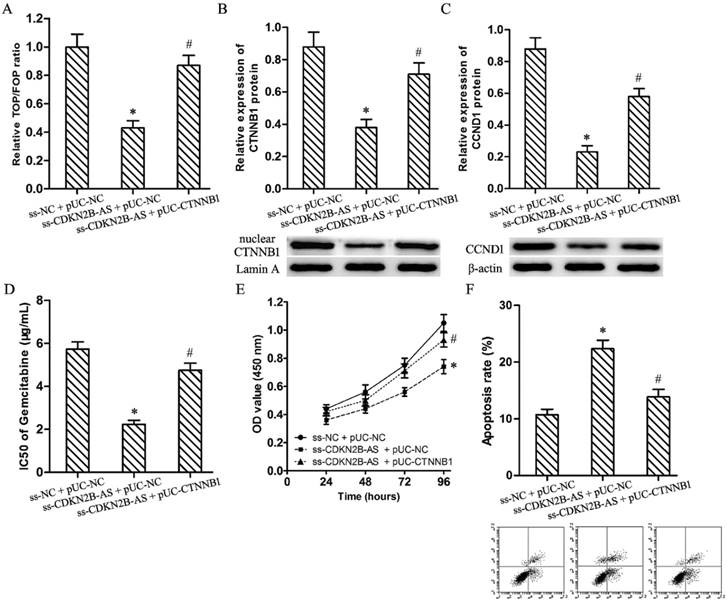 To sum up, activating of Wnt signaling pathway restored mostly the effecting of CDKN2B-AS knockdown on Gemcitabine sensitivity in T24/Gem cells.

Gemcitabine is a kind of broad-spectrum antimetabolite, and a first-line chemotherapeutic drug for BUC. Gemcitabine is a cytosine analogue, which can replace one of the building blocks of nucleic acids, lead to “masked chain termination”, inhibit further DNA synthesis, and thereby lead to cell death. However, Gemcitabine resistance is a barrier leading to treatment failure.

Firstly, CDKN2B-AS gene was high-expressed in BUC tissues and cell lines, and its over-expression was positive related with high pathological grade of BUC, which suggested that CDKN2B-AS gene was involved in the progress of BUC. Furtherly, the over-expression of CDKN2B-AS was associated with the low sensitivity to Gemcitabine of BUC patients, which preliminarily confirmed CDKN2B-AS participated in the genesis of chemotherapy resistance in BUC. Xu R reported CDKN2B-AS contributed to paclitaxel resistance of lung adenocarcinoma A549 cells [24]. Knockdown of CDKN2B-AS inhibited the development of multidrug resistance in gastric cancer cells to paclitaxel or 5-fluorouracil [25]. Nevertheless, it is still unknown whether CDKN2B-AS take part in chemotherapeutic resistance of BUC, especially to Gemcitabine.

High-expression of lncRNA CDKN2B-AS is associated with the low sensitivity to Gemcitabine of BUC patients, CDKN2B-AS inhibits Gemcitabine sensitivity through Wnt signaling pathway in BUC. Our findings help to elucidate the underling mechanism of chemotherapeutic resistance in BUC, and future study will provide a novel therapeutic target for BUC.