Background: Most hepatocellular carcinoma (HCC) patients have undergone a progression from chronic hepatitis, then liver cirrhosis (LC), and finally to carcinoma. The objective of this study was to elucidate risk factors to predict HCC development for cirrhosis patients.

Methods: Multiple methylated specific PCR (MSP) was applied to determine methylation status of heparocarcinogenesis-related genes in 396 tissue and plasma specimens and multivariate cox model was used to analyze the relationship between risk variables and HCC development among cirrhosis patients, followed up in a median period of 30 months.

Conclusions: Ultimately, high-risk cirrhosis patients with 55-over years or 2-3 aberrantly-methylated genes should be paid more attention to be regularly screened with HCC development.

Hepatocellular carcinoma (HCC) was the most frequent liver cancer affecting around 700,000 patients every year[1]. To date, their poor prognosis remained a problem due to intrahepatic spread and extrahepatic metastasis[2]. Furthermore, curative treatments, like surgical resection, radiofrequency ablation, liver transplantation, were only confined to early-stage cancer[3]. As we know, HCC always occurred in patients with underlying chronic liver disease, such as cirrhosis patients. Therefore, it is of clinical importance to identify non-invasive risk variables for monitoring and screening high-risk patients with cirrhosis.

To date, we still remain unclear about the molecular pathogenesis of heparocarcinogenesis. However, it has been revealed that epigenetic aberrance, especially global DNA hypomethylation concomitant with locus-specific DNA hypermethylation in gene promoters, plays vital roles in carcinoma progression[4-7]. Additionally, alterations in DNA methylation patterns contributes to early-stage hepatocarcinogenesis[8] and as compared to cirrhosis, aberrantly-methylated genes tested in HCC were enriched[9]. Moreover, DNA methylation markers could be utilized to detect human cancers in blood, plasma, secretion, or exfoliated cytology specimens and predict the risk of cancer development[10]. Thus, cell free DNA (cfDNA) circulating in plasma of cirrhosis patients may represent a promising non-invasive alternative for HCC screening and monitoring.

Plasma and tissues samples were obtained from the West China Hospital in Sichuan University with informed consent, comprising of 119 HCC, 105 liver cirrhosis, 52 benign lesion patients (liver angioma, etal) and 50 healthy people. We collected 326 plasma specimens from above these people and 70 tissue specimens, with 40 HCC and 30 paired non-HCC tissue included, from 119 HCC patients. Among the 105 LC patients, 77 were male and 28 were female, aged from 18 to 70 years with average age being 45 years and there were 78 HBV-positive cases and 6 serum AFP > 400ng/ml cases.

To investigate the methylation status of CpG islands of RASSF1A, p16, SFRP1, SOCS3 and LINE1, multiplex MSP was performed in a 25µL-volume reaction system, consisted of 50ng sodium-bisulfite treated DNA, isometric mixture of gene primers 3µL, 2×Master Mix 12.5µL (Qiagen, Germany) and ddH2O. The multiplex MSP primer sequences for RASSF1A, p16, SFRP1, SOCS3 and LINE1 were described in Table S1[11,14,20-22]. The reaction conditions were listed as follows: denaturation at 95℃ for 15 min, 30 cycles of 94℃ for 30s, annealing for 90s and 72℃ for 90s, with an ultimate extension of 10 min at 72℃. The multiplex MSP products were analyzed by capillary electrophoresis (CE).

The LC patients were followed up through telephone calls and the average follow-up period was 30 months. They were inspected routinely with serum AFP level and abdominal ultrasonography in hospital. Also, computed Tomography (CT) was implemented together with chest radiographic examination to get aware of the disease progression.

SPSS19.0 statistical software was applied for data analysis, including the Pearson's χ2 test or Fisher's exact test. Univariate and multivariate cox regression analysis were explored to estimate risk variables for patients. The overall predictive accuracy for HCC incidence was summarized by Receiver operating characteristic (ROC) curve. All P values were two-tailed and were considered significant when less than 0.05. 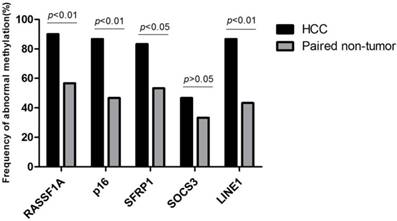 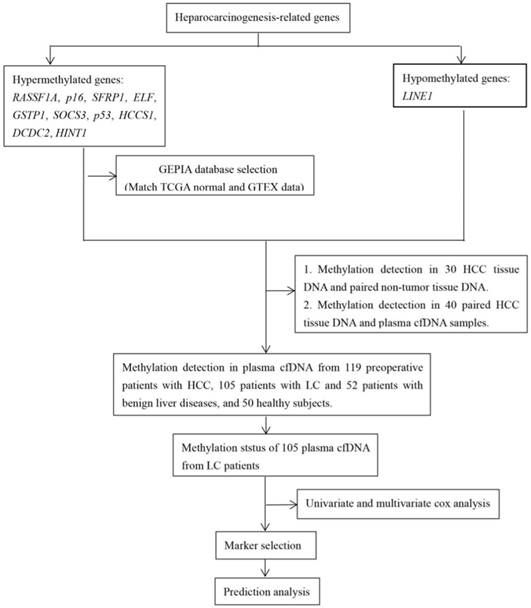 Comparison of the concordance of methylation status for six genes in 40 HCC cases and tumor plasma (Simple kappa coefficient). 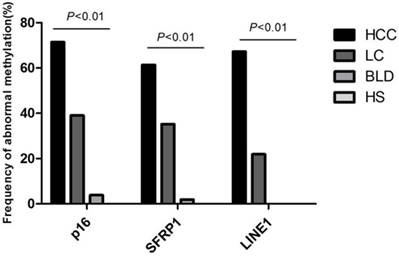 The concurrent analysis of age and plasma p16, SFRP1, LINE1 methylation could promote the overall accuracy for HCC incidence prediction among LC patients

After the methylation status of p16, SFRP1, and LINE1 in plasma cfDNA was investigated, 105 cirrhosis patients were followed up in a median period of 30 months. 32 out of them developed HCC and the HCC incidence rate was 30.48%. Then, we summarized the risk factors (Age, gender, HBsAg, Anti-HCV, and AFP level) and abnormally-methylated genes (p16, SFRP1, and LINE1) to participate in the univariate and multivariate cox analysis (Table 2). As data demonstrated, patients' age and aberrant methylation of p16, SFRP1, and LINE1 were statistically related with HCC development among the 105 high-risk individuals. Aimed to explore whether the concurrent four risk variables were superior for HCC development, we analyzed the sensitivity, specificity and predictive accuracy with the use of singe or multi-risk panels based on Receiver operating characteristic (ROC) curve. Table 3 presented that along with the increased number of risk variables enrolled in HCC incidence prediction, the overall accuracy kept an elevating trend. Most importantly, the sensitivity, specificity, and overall predictive accuracy reached the highest with the prediction panel containing the four variables together (93.8%, 63.0%, 90.7%, respectively).

Univariate anaysis and multivariate analysis of 105 patients with cirrhosis liver in relation to HCC development.

Comparison of the predictive accuracy of age and plasma p16, SFRP1, LINE1 methylation, when used alone or combined, in liver cirrhosis patients. 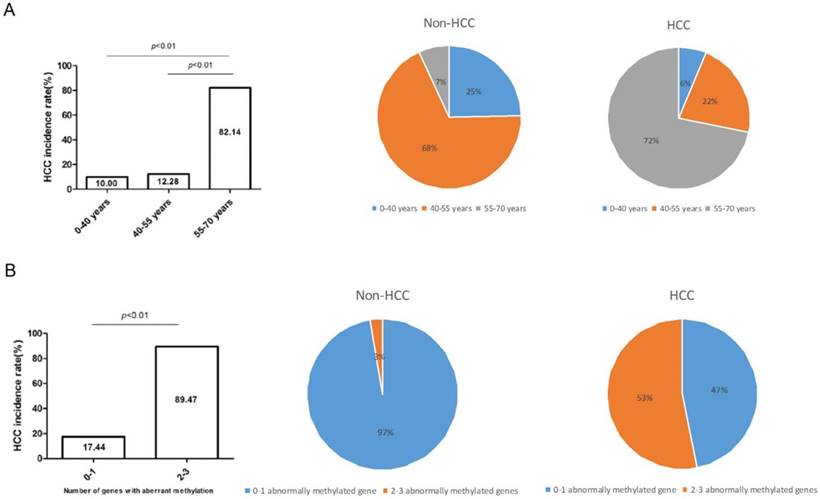 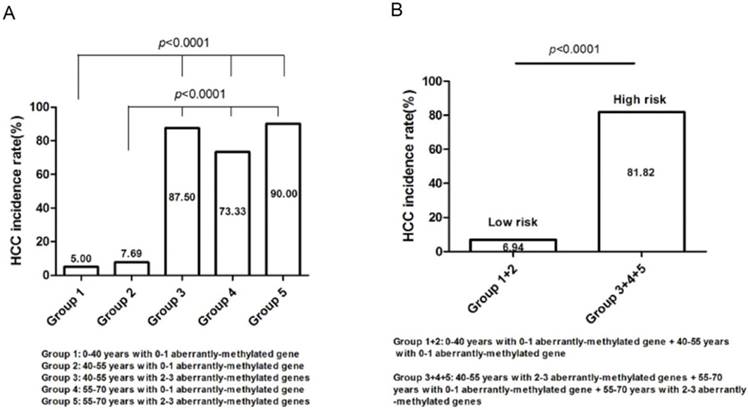 Groups classification based on concurrent analysis with diverse age and number of aberrantly-methylated gene.

In previous investigations, older age[23-24], male sex[25-26], severity of compensated cirrhosis at presentation, and sustained activity of liver disease[27] are important predictors of HCC incidence. Whereas, in this study, significant efforts had been put emphasis on the discovery and detection of other biomakers for early warning of high-risk individuals with cirrhosis for HCC incidence. It seemed that Promoter methylation appeared to be one of the earliest epigenetic abnormalities in human hepatocarcinogenesis[28-29]. And the molecular alteration could be already detectable in cirrhosis, representing a premalignant liver condition as overwhelming majority of HCC arised in the context of liver cirrhosis[30]. Above all, thus far, fewer than 20% of cirrhosis patients were efficaciously enrolled in surveillance programs[31]. These findings demonstrated the promise of gene promoter aberrant methylation in plasma as a molecular marker for identifying high-risk cirrhosis patients, more likely to suffer from cancer development[32].

Present studies have suggested that expression alterations of p16, SFRP1, and LINE1 were intimately implicated in hepatocarcinogenesis. Thus, the aberrant methylation of the three genes was included as biomarkers for screening and monitoring high-risk patients with cirrhosis. We observed that the average number of aberrantly methylated gene showed an increase from the progression of cirrhosis to HCC, consistent with the previous reports[11]. Whereafter, among 105 LC cases, who were investigated the three genes' methylation status, 32 patients developed HCC in a short follow-up period. Multivariate analysis suggested that HCC incidence was significantly depending on age and the aberrant methylation of p16, SFRP1, and LINE1, which could be considered as candidate contributing variables for HCC development. ROC analysis indicated that concurrent analysis of the four variables had a overall 90.7% predictive accuracy. Addtionally, HCC incidence rate was greatly in line with the increase of aberrantly-methylated gene' s number, which was in accordance with the result that genes epigenetically altered in HCC were significantly enriched along with HCC development[30]. Identification of risk variables for HCC incidence among high-risk patients with cirrhosis was extremely momentous, because they can be screened carefully in case of HCC incidence and given potentially curative treatments. According to the data suggested, patients with ≥55 years old or 2-3 abnormally-methylated genes may have the higher risk with HCC incidence, which may be valuable in assessing the risk of HCC incidence among high-risk individuals during a short period.

This is the first study to prospectively examine the relationship between epigenetic alterations in heparocarcinogenesis-related genes, clinical characteristics and HCC incidence among cirrhosis patients to guide monitoring and surveillance for these high-risk populations.

This study was supported by “Science & Technology Department of Sichuan Province (no. 2013SZ0048)

Medical administration office of Sichuan University had approved the study and plasma specimens were obtained with patients' constent. All experiments were performed in accordance with the relevant guidelines and regulations.