To assess the efficacy and toxicity of Lobaplatin (LBP) -contained chemotherapy on extensive stage small-cell lung cancer (ES-SCLC), we conducted a prospective, single-arm, and multicenter Phase IV clinical trial on Lobaplatin (ChiCTR-ONC-13003471), and used the patient clinical data obtained from our cancer center to perform the analysis. Previously untreated patients with ES-SCLC were given LBP intravenously (IV) at 30 mg/m2 on day 1 and etoposide IV at 100 mg/m2 on day 1, 2, and 3. The treatment was cycled every 21 days, lasting for four to six cycles. The patients with second-line treatment or above were also included in the study, and they were treated with LBP-contained regimen: a single dose of LBP at 50 mg/m2 on day 1 through IV; combined application, LBP30 mg/m2 IV on day 1. From May 2015 to August 2016, 36 patients were enrolled in the study at our cancer center. For the 30 first-line patients, the median overall survival (OS) and the median progression-free survival (PFS) was 13.0 months (ranging from 11.2 to 14.7 months) and 4.7 months (ranging from 1.6 to 7.7 months) respectively, with overall response rate of 57 % and disease control rate of 85.7%. For the 6 patients with second-line treatment or above, one patient got a partial response (PR) and four patients got a stable disease (SD). The most frequent drug-related adverse effects were leukopenia and neutropenia, and no grade 3/4 hepatotoxicity or nephrotoxicity was observed. These results indicated that LBP-contained chemotherapy was effective and tolerable for extensive stage SCLC in terms of response and survival. However, due to the small sample size of this study, we need to wait for the OS data of phase Ⅲ clinical trial and the final data of this multicenter Phase IV study to draw the conclusion.

Lung cancer is one of the most common cancers in the world. It is the leading cause of death in China, with increasing incidence and death rate [1, 2]. Small cell lung cancer represents 15-20 % of the newly diagnosed lung cancer around the world, and is also the most aggressive subtype [3]. As reported, the median survival of SCLC without treatment is only 2-4 months. About two-thirds of the SCLC patients present to clinic with obvious metastasis, which is classified as extensive stage SCLC (ES-SCLC) [4].

The recommended treatment for untreated ES-SCLC patients is a combination chemotherapy of platinum-based drug and etoposide, which has been the standard regimen since mid-1980s [5, 6]. Although this chemotherapy produces a good response rate at 60%-70% for ES-SCLC, all the patients experience relapses, with a median survival of 9.3-12.8 months. Several attempts have been made to improve the efficacy, including alternating non-cross-resistant drugs, increasing total dose and dose intensity, or adding treatment courses and number of drugs, but none of them led to improved survival [7].

As a common platinum therapy, cisplatin treatment frequently causes severe toxicities, such as gastrointestinal toxicity, nephrotoxicity and neurotoxicity. Lobaplatin is a third-generation platinum derivative, which has been approved in China for treating metastatic breast cancer, chronic myelogenous leukemia and SCLC (http://app2.sfda.gov.cn/datasearchp/index1.do?tableId=25&tableName=TABLE25&scdw=scdw&Id=182332). It has showed promising activities in several preclinical studies, with incomplete cross-resistance with other platinum drugs, and lower renal toxicity compared to cisplatin [8]. Our cancer center has participated in the prospective, single-arm and multicenter Phase IV clinical study to assess the safety and efficacy of Lobaplatin-contained chemotherapy for small cell lung cancer. The clinical study has registered in Chinese Clinical Trial Registry (ChiCTR-ONC-13003471). In this paper, we prospectively assessed the efficacy and toxicities of Lobaplatin-contained chemotherapy for ES-SCLC using the clinical data obtained from our cancer center.

Previously untreated ES-ECLC patients were treated with LBP intravenously (IV) at 30 mg/m2 on day 1, and etoposide IV at 100 mg/m2 on day 1, 2, and 3. The treatment was cycled every 21 days, lasting for four to six cycles. Granulocyte colony stimulating factors were allowed to use at cycle 2 and beyond if the patients developed febrile neutropenia. The patients with second-line treatment or above were also included in the study. The specific Lobaplatin-contained regimen for these patients was determined by researchers: Using single drug, LBP50 mg/m2 intravenously (IV) on day 1; combined application, LBP30 mg/m2 intravenously (IV) on day 1.

Before the start of every treatment cycle, blood cell count, urinalysis, and biochemistry tests were performed to assess renal and hepatic functions, as well as electrolytes. Toxicity was graded based on the National Cancer Institute Common Terminology Criteria for adverse events version 3.0 (http://ctep.cancer.gov/protocolDevelopment/electronic_applications/docs/ctcaev3.pdf). To measure the tumor sizes and locations, and to assess the responses, radiographic studies including computerized tomography (CT) scan were performed within 4 weeks prior to the treatment, as well as after every two cycles of treatment. All the response evaluation was based on the Response Evaluation Criteria in Solid Tumors (RECIST) [9].

For patients with grade 3 febrile neutropenia and grade 4 hematologic toxic effects, the doses of etoposide and LBP in subsequent cycles were reduced to 80% of the original doses. In addition, treatment was postponed until neutrophil count ≥1.0×109/L, platelet count ≥85×109/L, hemoglobin ≥85 g/L, and creatinine clearance (Ccr) ≥60 ml/min (Cockcroft-Gault). The patients with therapy delay caused by toxicity for more than 2 weeks were removed from the study.

The serum tumor markers (TM) of lung cancer, including pro-gastrin-releasing peptide (Pro-GRP), neuron-specific enolase (NSE), carcino-embryonic antigen (CEA), cytokeratin 19 fragment (Cyfra21-1), cancer antigen125 (CA125), and cancer antigen153 (CA153) were tested at baseline and before each treatment cycle. The tests were performed in the clinical laboratory of our cancer center.

The study protocol was reviewed and approved by the ethics committee of Sun Yat-sen University Cancer Centre. The written informed consent was obtained from every study participant.

Between May 2015 and August 2016, thirty-six patients were enrolled in the study at our cancer center. All patients received the treatment as planned and were assessed in intent-to-treat (ITT) analysis for toxicity, response, and survival measurements. The clinical characteristics of these patients were as follows: 83.3% male; 88.9% with ECOG PS ranging from 0 to 1; median age of 57.5 years old (ranging from 31 to 71 years old; Table 1).

The baseline characteristics of the patients

A total of 131 cycles of treatment were administered, with the median cycle number of 3.5 for all patients and 4 for the 30 first-line patients. 16 (53.3%) out of the 30 first-line patients completed the entire 4-6 cycles of chemotherapy as scheduled. From all patients (36), 18 (50%) had prolonged treatment; 3 received reduced doses, and 2 of them terminated the treatment because of severe neutropenia or anemia. 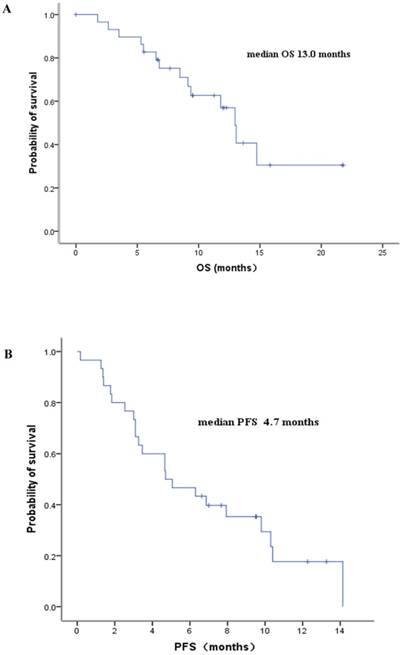 All the 36 patients were tested for toxicity. The most commonly observed toxicity was hematologic toxicity. Major toxicities with grade ≥3 were listed in Table 2. Grade 3 or 4 leukopenia and neutropenia were observed in 55.5% and 58.3% of the patients, respectively. The patients with Grade 3 leukopenia or neutropenia were successfully treated with granulocyte colony-stimulating factor (G-CSF). In addition, 25-30% of the patients experienced Grade 3 or 4 thrombocytopenia and anemia. For two patients, the treatment was terminated due to severe neutropenia or anemia. No treatment-related death occurred in this study. The non-hematologic toxicities occurred in this study were all in grade 1 or 2. No grade 3/4 hepatotoxicity or nephrotoxicity was observed. Due to the preventive use of antiemetics during chemotherapy, most patients experienced mild nausea/vomiting.

According to the test report from the clinical laboratory, the upper normal limits (UNL) of the test variables were: Pro-GRP 43ng/L, NSE 15.2ng/ml, CEA 5ng/ml, Cyfra21-1 3.3ng/ml, CA125 35U/ml, and CA153 25U/ml. We analyzed the tumor markers in 30 first-line patients, and found that the basal levels of Pro-GRP and NSE were elevated in more than 90% of the patients; Cyfra21-1 and CA153 were not changed or slightly elevated; CEA and CA125 were increased in 46% and 52% of the patients. These results suggested that Pro-GRP and NSE were the most sensitive indicators of small cell lung cancer.

Studies have shown that Lobaplatin has various advantages as a drug, including potent antineoplastic activities, no significant nephrotoxicity or neurotoxicity [10], and no cross-resistance with cisplatin [11]. Preclinical study has demonstrated that Lobaplatin had significant antitumor activity against NSCLC both in vitro and in vivo [12]. In phase II clinical trials, Lobaplatin exhibited an active anti-tumor activity in multiple solid tumors, such as hepatocellular carcinoma [13], breast cancer [14], and metastatic nasopharyngeal cancer (NPC)[15, 16].

The outcomes of ES-SCLC patients are often dismal, with median overall survival less than 10 months and 5-year survival <5% [17]. Currently, the choice of first-line treatment for ES-SCLC is four to six cycles of etoposide combined with a platinum salt (cisplatin or carboplatin), which results in a median survival of 8 to 10 months [18]. Combination chemotherapy of irinotecan and cisplatin for ES-SCLC leads to equal or better survival than etoposide and cisplatin, with a median survival of 9.3-12.8 months [19, 20]. In our study, the median OS for the first-line patients was 13.0 months. To our best knowledge, this is the first overall survival data of Lobaplatin in SCLC. Our results demonstrated that the EL regimen was better than or equal to previous standard regimens in terms of OS. However, due to the small patient number in our study, we still need to wait for the final OS results of the phase III study on Lobaplatin and etoposide for ES-SCLC [21], as well as the final data of this multicenter Phase IV study.

Welink et al. reported that the dose-limiting toxicity of Lobaplatin was thrombocytopenia, with the threshold dose of 50 mg/m2 [22]. However, in our study, the most common hematological toxicities were leukopenia and neutropenia, which occurred in 17 patients with Grade 3/4 (56.6%) in first-line treatment. The Lobaplatin dose used in our study was 30 mg/m2, which was different from the previous study and might lead to different side effects [22]. The toxicity profile of our study was consistent with another two Phase II studies [16, 23], which also showed that when the Lobaplatin dose was reduced to 30 mg/m2, the most common hematological toxicities were leukopenia and neutropenia. Moreover, no grade 3/4 hepatotoxicity or nephrotoxicity was observed in our study. Therefore, our study suggested that Lobaplatin regimen could be well tolerated in SCLC patients.

In our study, the effects of Lobaplatin in second-line therapy or above were investigated in a small patient cohort. Among the six patients with second-line treatment or above, one patient got PR and four patients got SD. We found that the combined Lobaplatin regimen showed effect in the second line treatment with tolerable toxicity, which needs to be further verified. Tumor markers including Pro-GRP, NSE, Cyfra21-1, CA153, CEA and CA125 were evaluated in our study. As reported previously, NSE and Pro-GRP were useful markers for the diagnosis and therapeutic monitoring in SCLC patients [24, 25]. In our study, elevated Pro-GRP and NSE were detected in more than 90% of ES-SCLC patients before treatment, which confirmed the role of these two markers in SCLC diagnosis.

In summary, according to the results in our cancer center, Lobaplatin-contained chemotherapy was effective in terms of response and survival compared with other regimens for ES-SCLC. However, due to the small sample size, the OS data of phase III clinical study [21] and the final data of this multicenter Phase IV study are needed to draw the final conclusion.

6. Pujol JL, Carestia L, Daures JP. Is there a case for cisplatin in the treatment of small-cell lung cancer? A meta-analysis of randomized trials of a cisplatin-containing regimen versus a regimen without this alkylating agent. British journal of cancer. 2000;83:8-15