A decision tree-based prediction model for fluorescence in situ hybridization HER2 gene status in HER2 immunohistochemistry-2+ breast cancers: a 2538-case multicenter study on consecutive surgical specimens

Objective: To investigate the proportion of HER2 gene amplifications and the association between the HER2-IHC-staining pattern and gene status in IHC-2+ breast cancers according to 2013 American Society of Clinical Oncology (ASCO)/College of American Pathologists (CAP) guidelines.

Methods: We retrospectively analyzed and re-evaluated the IHC-staining pattern of 2538 IHC-2+ surgical specimens of breast cancer from November 2014 to October 2015 in 12 institutions. All cases used for building a prediction model of HER2 gene amplification according to the IHC-staining pattern and were randomly divided into a training set (n = 1914) or validation set (n = 624).

Results: The overall HER2 fluorescence in situ hybridization (FISH) amplification, non-amplification and equivocation rates in HER2 IHC-2+ cases were 17.8%, 76.2% and 6.0%, respectively. In the training set, cases that had ≤ 10% of cells with intense, complete and circumferential membrane staining or had > 85% of cells with complete membrane staining of any staining intensity tended to be HER2 gene amplified (77.0% and 60.5%, respectively). And cases with weak and incomplete membrane staining had the lowest amplification rate of 6.1%. The prediction model was constructed based on IHC-staining pattern in the training set and validated using a validation set. The positive and negative prediction values were 51.6% and 79.2%, respectively, in the validation set. Moreover, the HER2 copy number per cell was much higher in cases with amplification-associated staining patterns (7.84 and 8.75) than in cases with non-amplification-associated staining patterns (2.97 to 4.41, P < 0.05).

Conclusions: In HER2 IHC-2+ breast cancers, the staining pattern is associated with the HER2 gene status. This finding is compatible with recommendations of 2013 ASCO/CAP guidelines.

Human epidermal growth factor receptor-2 (HER2; also named HER2/neu or ERBB2) is localized to chromosome 17q21 and encodes a transmembrane tyrosine kinase receptor [1]. Since HER2 was discovered in 1984 [2], and its prognostic value in breast cancers was reported in 1987 [3], this gene has been thoroughly studied and implicated in the diagnosis, therapy and prognosis of breast cancers. After the detection of HER2 overexpression and/or amplification, breast cancer patients are recommended to receive HER2-targeted therapy, such as trastuzumab and pertuzumab. Several studies have confirmed that HER2 expression has an inverse relationship with prognosis [1, 4]. However, only HER2-positive breast cancers can benefit from HER2-targeted therapy, and patients who receive targeted therapy show higher disease-free survival and overall survival than those who do not [5, 6].

Accurate evaluation of the HER2 status is mainly based on immunohistochemistry (IHC) and/or fluorescence in situ hybridization (FISH) by pathologists. Through IHC assays, the expression levels of HER2 protein are classified into 0, 1+, 2+ and 3+ based on American Society of Clinical Oncology (ASCO)/College of American Pathologists (CAP) guidelines [7, 8]. Breast cancers with HER2 expression levels of 0 and 1+ are HER2-negative, 2+ are HER2-equivocal and 3+ are HER2-positive. Based on ASCO/CAP 2007 guidelines [7], HER2 IHC-2+ breast cancers comprise up to 17% of newly diagnosed cases [9, 10]. However, with the update to the ASCO/CAP 2013 guidelines [8], the cut-off value between HER2 IHC-2+ and HER2 IHC-3+ tumors is down to 10%, which suggests that more breast cancers are HER2 IHC-3+. Additionally, the guidelines define > 10% of tumor cells with an incomplete, weak membrane or moderate staining as HER2 IHC-2+, which leads to a higher proportion of HER2 IHC-2+ tumors [11].

Approximately 90% HER2 overexpression breast cancers are caused by gene amplification [12]. FISH directly reflects HER2 gene copy numbers, and is thus considered the “golden standard”. However, it is more time-consuming and more expensive than IHC method. Thus, FISH is typically used for HER2-IHC-2+ breast cancers to identify gene-amplified cases. And the change of cut-off value in HER2/CEP-17 ratio, which is 2.0 in ASCO/CAP 2013 guidelines [8] and 2.2 in 2007 guidelines [7], is likely to lead to a higher proportion of gene-amplified cases in HER2 IHC-2+ tumors [13].

Moreover, along with the increased incidence rate of breast cancer in China and other areas worldwide [14, 15], the number of HER2 IHC-2+ tumors will also increase. Although there is an increasing need for FISH and the complexity of the IHC staining patterns in HER2 IHC-2+ cases, which differ in intensity (weak, moderate or intense), integrity (complete or incomplete) and percentage, little is known about the relationship between FISH results and different IHC staining patterns in HER2 IHC-2+ cases.

To investigate the proportion of HER2 gene amplifications and the association between the HER2-IHC-staining pattern and gene amplification in IHC-2+ breast cancers, we designed a multicenter study including over 2,000 HER2 IHC-2+ consecutive surgical specimens based on ASCO/CAP 2013 guidelines [8].

This retrospective, multicenter study included patients who received routine surgical excision of breast invasive ductal carcinoma between November 2014 and October 2015 from 12 institutions in China. The revised guideline for HER2 detection for Chinese breast cancers according to ASCO/CAP 2013 guidelines [8] was published in April 2014, and it was immediately accepted and applied in daily work nationwide. Thus, we selected this time period to begin our study. The pathology departments in these institutions passed “Pathology Quality Control Centre (PQCC)” of National Health and Family Planning Commission certification. And external quality assessment system of HER2-IHC in breast cancers is a major project of the PQCC which lasts for about seven years, aimed to assess the consistency and accuracy of HER2-IHC staining and interpretation in different pathology departments. All breast cancers included in this study were HER2 IHC-2+ cases, and the gene status was detected through FISH. The definition of HER2 IHC-2+ cases is based on the ASCO/CAP 2013 guidelines [8]. By the way, we excluded invasive micropapillary carcinoma in this study because of its unique staining pattern [16, 17]. The study profile is illustrated in Figure 1.

All participating institutions used Ventana anti-HER2/neu (4B5, rabbit monoclonal antibody, Ventana Medical Systems) for HER2-IHC staining. The cases included in this study were re-evaluated on the percentage of staining intensity and membrane integrity by two experienced pathologists. The re-evaluation of percentage in the IHC staining model was focused on invasive ductal carcinoma with higher intensity in the entire slide. Different staining intensities with complete or incomplete membrane integrity are shown in Figure 2. 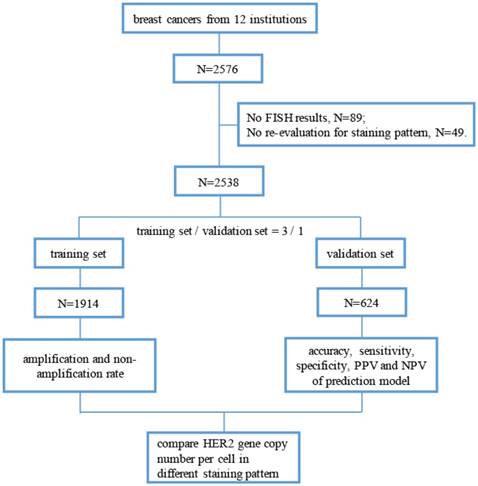 Dual-color HER2 FISH probe kits were used in the present study, and all kits were certificated by the China Food and Drug Administration (CFDA), Food and Drug Administration (FDA) and/or Council of Europe (CE). If there was HER2 genetic heterogeneity, then the tumor regions with higher HER2/CEP17 ratios and/or HER2 copy numbers were considered in the final interpretation.

The re-evaluation of the IHC staining pattern was primarily based on zones with higher intensity. To reveal the association between the staining pattern and the FISH test results, we used a decision tree-based prediction model, which can automatically calculate and classify characteristics with specific endpoints. To generate a more precise prediction model, we added more cases into the training set. Subsequently, all cases in the present study were randomly divided into training sets (n = 1914) and validation sets (n = 624). The ratio of the number of cases in the training set to that in the validation set was 3:1, and the prediction model was calculated based on training set data. Then, we used this prediction model in the validation group. According to ASCO/CAP 2013 guidelines [8], tumor cells within 10% intense, complete and circumferential membrane staining were also classified as HER2 IHC-2+ cases. We regarded these special tumors as having an independent staining pattern. Based on results from a decision tree-based prediction model, we divided all cases into six different categories according to different staining patterns, and differences in the HER2 copy numbers among these categories were calculated by Student-Newman-Keuls (SNK). Continuous variables are presented as the means ± standard deviation (SD). The two-sided significance level was set at P < 0.05.

1. Profile of HER2 IHC-2+ staining pattern

After excluding cases with no re-evaluation data of staining pattern or FISH results, 2538 HER2 IHC-2+ breast cancer cases were included in the present study. The overall HER2 FISH amplification rate in participating institutions was 17.8% (ranging from 9.0% to 37.0%). Moreover, the HER2 FISH equivocation rate was 6.0% (ranging from 2.6% to 10.6%), and the non-amplification rate was 76.2% (ranging from 59.8% to 88.4%). An overview of the re-evaluation of the IHC staining pattern is shown in Table 1. A total of 103 (4.1%) cases had complete and circumferential membrane staining that was intense and within 10% of the cells. In addition, 604 (23.8%) cases showed complete membrane staining, which had weak or moderate staining intensities. However, more cases (72.1%) had incomplete membrane staining. For staining intensity, 856 (33.8%) cases with weak staining and 1579 (62.2%) cases with moderate staining were observed. The distribution of the staining pattern in the training and validation sets is also shown in Table 1, and the differences in the membrane integrity, staining intensity and percentage between the two sets were not statistically significant (P > 0.05). The different staining patterns of HER2 IHC-2+ cases were shown in Figure 2.

2. Prediction of FISH results in the training and validation sets

Next, we applied this model to the validation set. The predicted and actual FISH results are shown in Table 2. In this set, the accuracy, sensitivity, specificity, and positive and negative prediction values were 76.4, 30.2, 94.5, 51.6 and 79.2%, respectively.

Profile of immunohistochemistry (IHC) staining pattern in all cases and cases in the training/validation set. 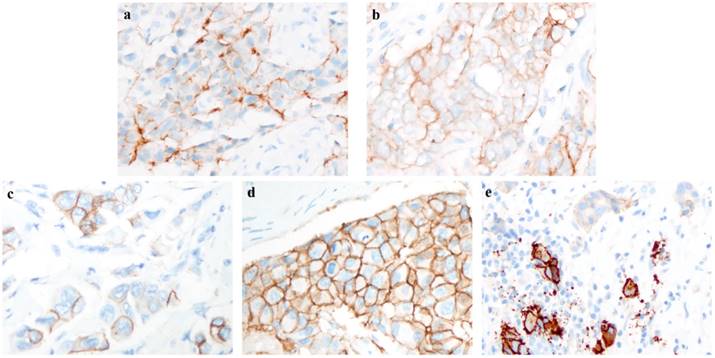 Decision-tree based prediction model of HER2 gene status and details on the number and ratio of different fluorescence in situ hybridization (FISH) results. 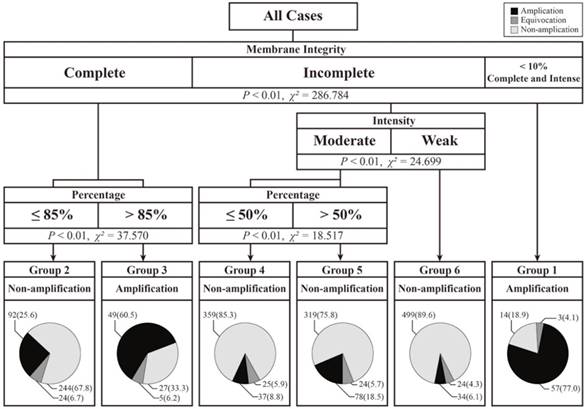 HER2 gene copy number per cell in different staining patterns 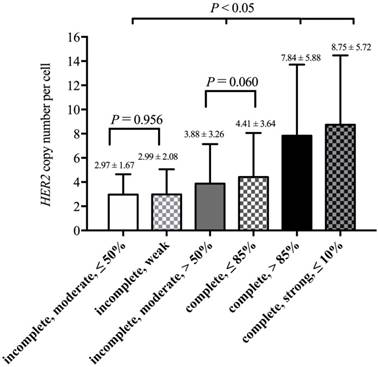 3. HER2 copy number per cell in different staining patterns

Based on results from the decision-tree method, 2538 cases could be divided into six groups according to membrane integrity, staining intensity and percentage. The lowest HER2 copy number per cell (2.97 ± 1.67) was observed in cases that had ≤ 50% of cells with moderate and incomplete membrane staining. Cases that had ≤ 10% of cells with intense, complete and circumferential membrane staining had the highest HER2 copy numbers per cell (8.75 ± 5.72). The means and SD of the HER2 copy number per cell in these groups are shown in Figure 4.

Then, we used SNK to calculate the differences among these groups (Figure 4). There was no significant difference between “incomplete, moderate, ≤ 50%” and “incomplete, weak” (P = 0.956), and there was also no difference between “incomplete, moderate, > 50%” and “complete, ≤ 85%” (P = 0.060). The four groups above could be observed as two separate categories, and two groups in one category showed no differences in the HER2 copy number per cell. Thus, these six groups could be divided into four categories. For HER2 copy number per cell, there were significant differences between every two categories (P < 0.05, Figure 4).

After ASCO/CAP 2013 guidelines were published, several studies had reported amplification rates of IHC-2+ cases ranging from 15.1% to 30.6% based on this revised guideline [18-21]. However, these studies were single-center and did not focus on IHC-2+ cases. Thus, the new cut-off value of HER2-IHC and FISH test in ASCO/CAP 2013 guidelines demonstrates a need for more large-scale and multi-center studies focusing on the HER2 IHC-2+ proportion in breast cancers and FISH-amplification rate in HER2 IHC-2+ breast cancers. Herein, we conducted a multicenter, large-scale study on HER2 IHC-2+ consecutive surgical specimens. Institutions participating in this study were distributed in China, and each facility was a region representative. Overall, the HER2 amplification rate was 17.8%, ranging from 9.6% to 37.0%. Ten of the twelve (83.3%) institutions had amplification rates ranging from 10% to 30%.

The authors wish to thank the research coordinators and cooperating pathologists of the twelve institutions for data collection.

19. Onguru O, Zhang PJ. The relation between percentage of immunostained cells and amplification status in breast cancers with equivocal result for Her2 immunohistochemistry. Pathol Res Pract. 2016;212:381-4