Colorectal adenocarcinoma (CRC) is the second leading cause of death due to cancer in the United States. According to expected number of new cancer cases and deaths in the United States, around 135,000 new cases of colorectal adenocarcinoma and 50,200 estimated deaths occur in 2017 [1]. Surgery is the foundation stone of therapy for CRC, and around 80 percent of patients have tumors that, at diagnosis, can be resected with curative intention, and chemotherapy is used most commonly in the adjuvant setting [2, 3]. The five-year overall survival for patients with localized, regional, and metastatic colon or rectal cancer is 91%, 72%, and 13% [1]. Thus, it is of great significance to improve the survival rate of patients with metastatic colorectal cancer.

As for CRC patients of any T stage, any N stage, and resectable synchronous metastases, synchronous resection or local therapy for metastases and resection of primary lesion are preferred according to National Comprehensive Cancer Network (NCCN) Guidelines Version1.2017 [4, 5]. When it comes to excision of lymph nodes, the International Union Against Cancer and the American Joint Committee on Cancer (AJCC) have recommended evaluation of at least 12 lymph nodes to confirm node-negative colon or rectal cancer [6]. Le Voyer et al. illustrated that an increase in the number of lymph nodes examined was significantly associated with improved survival for patients of colon cancer [7]. In addition, a more recent analysis of patients with stage I or stage II rectal cancer from SEER database revealed that survival improved with greater numbers of lymph nodes dissection [6]. However, two studies above were restricted to TNM from stage I to stage III. As a matter of fact, approximately 60 percentage of colorectal cancer patients would finally develop metastases [8-10], and the overall survival of mCRC was poor. The poor outcomes may be induced to some extent by the wrong choice of treatment including operation methods and the optimal sequencing of adjuvant chemotherapy, radiation therapy, which was on the debate and contradictory [3, 11]. Whether surgery should be performed to the primary CRC and lymph nodes is one of questions which should be answered. In previous study, we conducted large-population based retrospective study to analyze whether primary rectal cancer dissection improved survival of patients with metastatic rectal cancer and found primary rectal cancer dissection did contribute to better survival [12]. With respect to lymph node dissection, the present studies even lacked consensus on whether lymphadenectomy improve survival of resectable mCRC. A retrospective cohort study just showed that there was no survival benefit from the use of routine lymph node dissection of liver metastasis for mCRC [13]. While Bradatsch et al. revealed that lymph node dissection of metastases could provide a prognostic tool to better further treatment [14]. All of them paid attention to lymph node dissection of distal metastases. However, whether lymphadenectomy is needed for primary mCRC has not yet been clearly illuminated. In this study, we conducted a study using Surveillance, Epidemiology and End Results Program (SEER) database involved a large population with resectable mCRC from 2004 to 2013 to assess the prognostic value of lymph node dissection.

The main variable interested us was lymph node dissection. According to the status of whether lymphadenectomy was performed among patients with primary mCRC dissection, patients were divided into two groups: lymph node dissection group and non-lymph node dissection group. There were mainly three kinds of race classified in the study, namely the white race, the black and other race (containing American Indian, Asian and Pacific Islander). Age was divided into two parts: below 65 years old and at least 65 years old. Histology was classified as adenocarcinoma, mucinous adenocarcinoma and signet ring cell carcinoma. As for differentiation grades, well or moderately differentiated cancers were separated from poorly differentiated or undifferentiated carcinomas. T stage was categorized as T1, T2, T3 and T4 according to the AJCC Cancer Staging Manual (the 6th edition), and lymph node (N) stage was divided as N1, N2, N3 and N4 as well. Whether to receive adjuvant therapy such as chemotherapy or radiation was also considered in the study. Chemotherapy information for mCRC was classified as yes or no/unknown. Also consistent with chemotherapy information, radiation was reclassified as yes or no. Due to the difference of the anatomic characteristic, we classified tumor location as proximal colon, distal colon and rectal cancer. 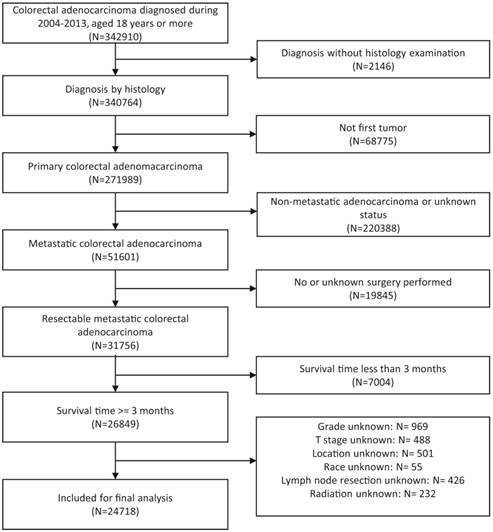 In our study, OS and CSS were mainly considered for our primary outcomes. CSS was defined as death caused by mCRC. Visualization and calculation of survival rates were demonstrated using Kaplan-Meier analysis and log-rank test. Univariate and multivariate Cox regression analysis were conducted to analyze affecting factors for OS and CSS of patients with primary mCRC resection. All data analyses were carried out with the Stata13.0 software and R software 3.3.3. P-value less than 0.05 was considered statistically significant. The results were shown with hazard ratios (HR) with 95% confidence intervals (CIs)

Characteristics of patients with mCRC

Characteristics of patients with metastatic colorectal adenocarcinoma dissected of primary tumor included in this study. 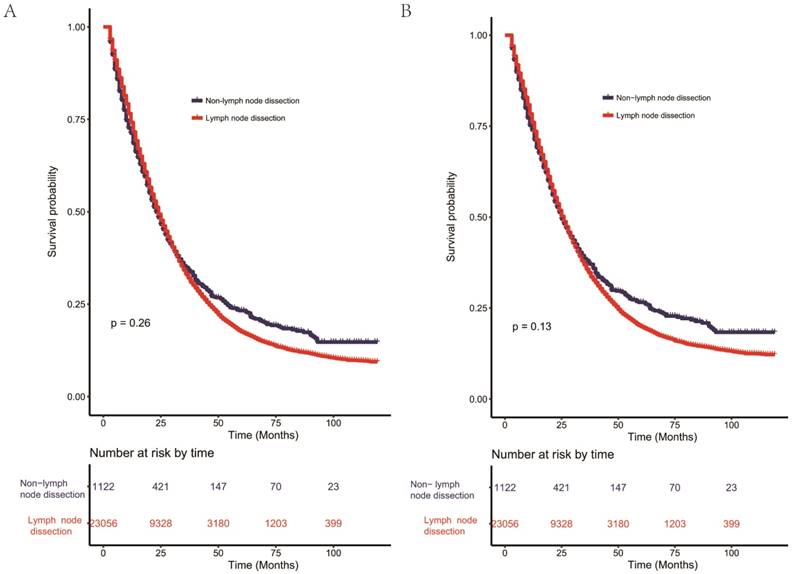 The treatment of patients with resectable stage IV CRC should be individualized and comprehensively multidisciplinary. When mCRC is regarded as resectable, resection of primary lesion should be performed following the principle of surgery [3]. According to NCCN Guidelines of colon and rectal cancer Version1.2017, at least 12 lymph nodes needed to be examined and clinically suspicious nodes should be removed if possible [7]. But, there was still an absence of precise guidance on whether lymph node dissection was needed on the matter of resectable mCRC. This study was the first study based on SEER database to assess the prognostic effect of lymph node dissection on survival of patients with mCRC.

So far as we knew, there were some studies carried out to identify the prognostic effect of lymph node dissection for stage I to III but not for stage IV. A cohort study from The United Kingdom revealed that lymph node retrieval had no significant effect on OS for Dukes stages A to C of colon cancer [15]. Kobayashi et al. found it unnecessary for patients with well-differentiated adenocarcinoma to remove regional lymph node after endoscopic resection in T1 colorectal cancer [16]. A retrospective study in 2017 indicated that patients who had more lymph node dissected seemed to promote survival, not relying on stage [17]. As opinions varied, no unanimous conclusion can be drawn. To date, there has been no direct evidence of relationship between lymph node dissection and survival of patients with resectable mCRC. Thus, our study was unique that provided a population-based research evidence of the role of lymph node excision in survival of patients with mCRC.

For T1 stage of mCRC, the tumor burden of cancer can be relieved to some extent by neoadjuvant chemotherapy, resection of the primary tumor, dissection of lymph node and excision of metastases. When it comes to tumor' penetration to the surface of the visceral peritoneum (T4a) or tumor's direct invasion or adhesion to other organs (T4b), excision of lymph node may not be suggested. One possible reason was that patients were too weak to receive tumor radical surgery with regional lymph node dissection.

As we all knew, published literature had defined colorectal carcinoma into three segments of the gut: proximal colon, distal colon and rectum. Proximal CRC is located within the proximal two-thirds of transverse colon, ascending colon and caecum, derived from the embryologic midgut. While distal colorectal carcinoma is seated in the colon derived from the embryologic hindgut, including distal third of the transverse colon, splenic flexure, descending colon, sigmoid colon and rectum [18]. Differences were noted in clinical characteristics, epidemiology, molecular feature, surgical treatment and clinical outcome due to different location of CRC [18, 19]. According to a retrospective, population-based study, proximal colon carcinoma presented at more advanced stage than distal colon and rectal cancer [19, 20]. And there was a higher percent of proximal colon carcinoma dissected with node-positive disease than distal colorectal cancer [20]. In general, previous studies only mentioned that proximal colon cancer had more positive node invasion and worse outcome, but there was no evidence on whether lymph node should be removed. Our study gave direct suggestion to surgeon that lymph node excision could be performed for distal colorectal cancer of metastatic patients but may not for proximal colon cancer patients.

Likewise, lymphadenectomy would not be advised for patients with poorly or undifferentiated cancer disease. Patients with poorly or undifferentiated cancer usually had more progressive diseases and more positive nodes involved [21], so that they are unable to withstand extra lymph excision. Besides, according to survival analysis of N stages in lymph node dissection group and non-dissection group, lower lymph node involvement (N1 and N2) were associated with improved survival when receiving lymphadenectomy for patients with mCRC. While for patients in N3 and N4 stage who could not tolerate operation, adjuvant therapy might be the better.

We should acknowledge some limitations in this study. Firstly, any retrospective study succumbs to inherent bias. The role of colorectal carcinoma excision and lymphadenectomy in patients with mCRC cannot be completely illuminated without a prospective and randomized clinical trial. Secondly, the detailed information on chemotherapy such as neoadjuvant chemotherapy, chemotherapy regimens, which were also related to the survival after lymph node dissection, was not available in the SEER database. Also, response to chemotherapy was associated with genetic status such as KRAS, NRAS, BRFA, and MSI, which was not available in SEER database. There had been studies regarding association of poor survival of right colon cancer and those studies revealed poor response to chemotherapy in proximal colorectal cancer was caused by different genetic status between locations of tumor [18, 22]. Likewise, lacking of information on metastatic extent, metastatic disease burden and complication rates of surgery led to misjudging the value of lymphadenectomy. The above mentioned factors should be considered in next potential analysis on whether lymphadenectomy improved surivial of patietns with resectable mCRC especially mCRC of T4, poor or undifferentiation, N3/N4 stage or proximal colon. Thirdly, quite number of patients with survival time less than three months were excluded in this analysis, which could also cause bias in analysis. However, death during three months were mostly attributed to complication of surgery and patient's condition and could not reveal clinical significance of lymphadenectomy to resectable mCRC. Fourthly, the information of simultaneous or metachronous metastases, which was a risk factor for poor survival of mCRC, was not available for cases included in this study. Finally, all the findings and conclusions were derived from the pre-existing database and we failed to validate our finding in our own institute, which caused relatively low reliability of our conclusions without external validation. Therefore, the results should be explained with caution and further study should be performed to validate our findings and conclusions.

In general, our findings revealed that a significant improvement in survival resulted from lymph node dissection and metastatic colorectal adenocarcinoma resection of patients with T1 stage, well or moderately differentiated, N1and N2 stage, and distal or rectal cancer. However, additional lymph node dissection may not be necessary for patients with primary mCRC dissection of T4, poor or undifferentiation, N3 and N4 stage and proximal colon. Further research ought to be conducted to confirm the findings above.

Thanks for all the datasets provided by the SEER Program and we obey the provisions of SEER. This study was funded by the project of Wenzhou Municipal Science and Technology Bureau (Grant number Y20170180).