Myeloid-derived suppressor cells (MDSCs) are precursors of macrophages, dendritic cells and granulocytes, and they exert immunosuppressive functions. Many studies have shown that MDSCs can suppress immune responses in tumors and other diseases. In humans, MDSCs generally coexpress the genes CD11b and CD33 and lack the MHCII protein HLA-DR; thus, these cells are currently defined as CD33+CD11b+HLA-DR-[1-3]. Recent comprehensive reviews have shown that MDSCs play important roles in tumor immune escape, tumor development and progression. These cells can play a role in negatively regulating immunity by secreting functional molecules such as arginase-1 (ARG-1), reactive oxygen species (ROS), and inducible nitric oxide synthase (iNOS)[4]. It is widely known that high expression of ARG-1 by MDSCs inhibits T cell activation, which affects cell immune responses. Recent reviews have established a direct role for ARG-1 in the inhibition of T cell function[5, 6].

It has become increasingly clear that long non-coding (lnc) RNAs play crucial roles in malignant tumorigenesis through a diverse range of mechanisms[7, 8]. LncRNA metastasis-associated lung adenocarcinoma transcript 1 (MALAT1), also known as nuclear enrichment autosomal transcript 2 (NEAT2), is widely expressed in mammals[9, 10]. Abnormal expression of MALAT1 has been observed in tumor tissues and is associated with many important biological processes, including proliferation, apoptosis, invasion and metastasis of tumor cells[11-14]. To understand this tumor related molecule, our research focused on how MALAT1 is expressed in peripheral blood mononuclear cells (PBMCs) from lung cancer patients and how MALAT1 impacts MDSCs.

In this study, we detected the proportion of MDSCs in lung cancer patients, the level of ARG-1 in MDSCs, and the percentage of CD8+CTL cells, and we later analyzed the relationship of MALAT1 with MDSCs in PBMCs and further explored the regulatory function of MALAT1 on MDSCs induction in vitro. Our findings provide an experimental basis and new insights to elucidate the role of MALAT1 and MDSCs in the immune function of patients with lung cancer.

For each subject, 2 ml peripheral blood treated with EDTA-K2 anticoagulant was centrifuged at 450×g for 5 min at room temperature, and the upper plasma was later collected. Blood cells were diluted with 2 ml PBS buffer, added slowly to the liquid surface of 2 ml Ficoll-Hypaque separation solution, and centrifuged at 450×g at room temperature for 20 min. Finally, the PBMC component was removed carefully and washed with PBS buffer.

Resuspended PBMCs (1×106) were cultured in 1 ml 10% fetal bovine serum RPMI 1640 medium in the presence of 50 ng/ml PMA (Sigma-Aldrich, California, USA) and 1 μg/ml of ionomycin (Sigma-Aldrich). After 1 hour, 1 μg/ml brefeldin-A (eBioscience, San Diego, USA) was added to the culture for 4 hours at 37℃ and 5% CO2. Stimulated PBMCs were stained with PE-Cy5-conjugated anti-CD3 mAb and FITC-conjugated anti-CD8 mAb (eBioscience), then fixed, permeabilized and stained with anti-IFN-γ mAb (eBioscience) with an Intracellular Staining Kit (Invitrogen, Carlsbad, CA) according to manufacturer's instructions. Th1 were defined as CD3+CD8-IFN-γ+, and CTL were defined as CD3+ CD8+ IFN-γ+.

Small interfering RNA (Ribobio, Guangzhou, China) was designed against the sequence of MALAT1, and a nonspecific scrambled siRNA was used as a negative control. Following the manufacturer's protocol, 1×106 PBMCs were transfected with 50 nmol/L MALAT1 siRNA or control for 24 hours, and 10 nmol/ml IL-1β and 10 nmol/ml GM-CSF were added to establish MDSC culture. Cells were cultured at 37℃ for 6 days with cytokine replacement every 2-3 days. Since certain markers are downregulated after several days of culture, recent reviews have quantified and described MDSCs using the myeloid marker CD33+[15-17]. Cultured cells were collected and analyzed by flow cytometry to determine the proportion of CD33+MDSCs.

Data were analyzed with GraphPad Prism (5.0) software. Student's unpaired t test was applied for comparisons. Correlation between variables was quantified by Pearson's correlation coefficients. All bars in graphs are expressed as the mean ± SD. Differences were considered to be statistically significant at p<0.05. 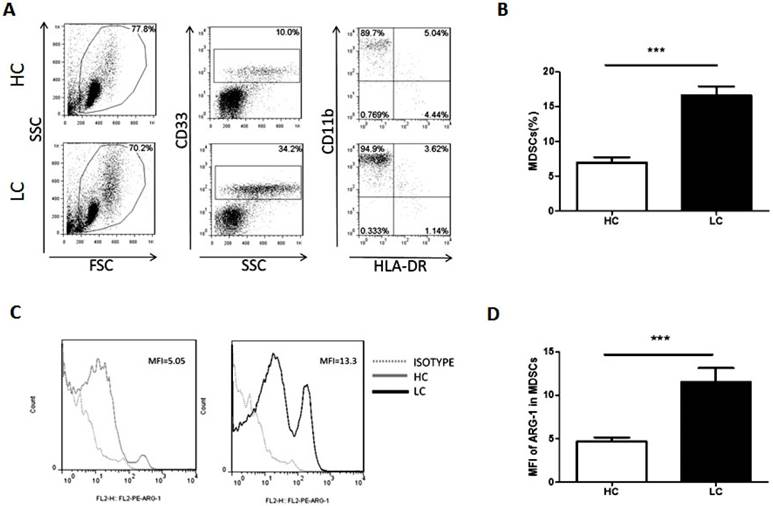 Proportion of MDSCs is increased in lung cancer patients

The proportion of MDSCs in PBMCs and the levels of ARG-1 in MDSCs were measured and analyzed by flow cytometry. Compared with healthy volunteers, patients with lung cancer had a significantly increased proportion of MDSCs (Fig. 1A and B). Moreover, the mean fluorescence intensity of ARG-1 in MDSCs was also significantly increased in the lung cancer group (Fig. 1C and D). These results further confirm that MDSCs and the functional factor ARG-1 are increased in lung cancer patients.

Association between MDSCs and CTL in patients with lung cancer

Association between MALAT1 and MDSCs in patients with lung cancer 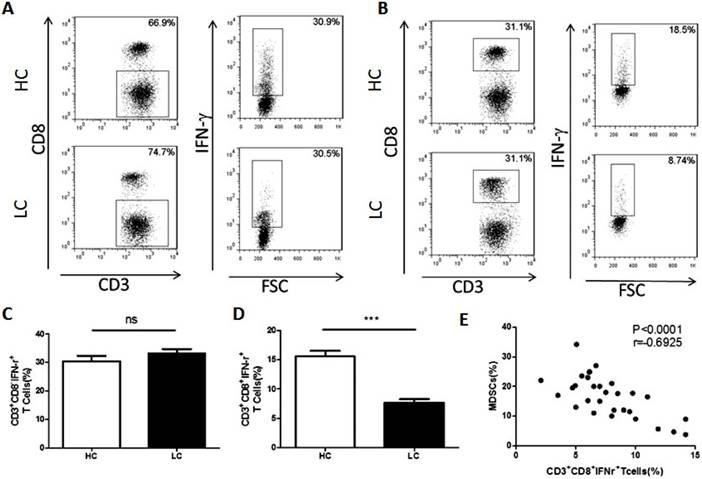 Knockdown of MALAT1 increased the proportion of MDSCs in vitro

To confirm a direct effect of MALAT1 on MDSCs, a MDSC-inducing culture system was established. PBMCs were transfected with MALAT1 siRNA, which reduced MALAT1 expression (Fig. 4A). Moreover, the MALAT1 siRNA treatment significantly increased the proportion of MDSCs in the PBMC cell culture system (Fig. 4B and C). These data indicate that MALAT1 negatively regulates MDSCs in vitro.

MDSCs play important roles in tumor immune escape, tumor development, and tumor progression. Many studies have reported that MDSCs can exhibit immunosuppressive effects on T cells through a variety of mechanisms, such as secretion of ARG-1, ROS, and iNOS[18]. ARG-1 breaks down arginine, which results in the inhibition of T cell activation. Nagaraj et al. reported that MDSCs had elevated levels of cyclooxygenase (COX-2) and prostaglandin E2 (PGE2), which repressed the quantity and function of CD8+T cells[19]. Some studies found markedly increased numbers of MDSCs and high levels of arginase in tumor tissues from lung cancer, and miR-9 regulated MDSCs differentiation by targeting the runt-related transcription factor 1[20]. The above research suggests that there are many ways to inhibit MDSCs. Zou and colleagues confirmed that MDSCs play multiple roles within the tumor microenvironment, such as inhibiting effector cells while also activating tumor cells to promote tumor development[21]. Several studies have shown that the quantity of MDSCs in tumor patients is significantly higher than in healthy people and is closely correlated with disease progression. Our results show that the proportion of MDSCs in PBMCs from lung cancer patients was significantly higher than from healthy controls. Therefore, it can be concluded that MDSCs exhibit major immunosuppressive function within the tumor microenvironment.

Knockdown of MALAT1 expression increases the proportion of MDSCs in vitro. A. The level of MALAT1 in PBMCs from healthy volunteers was determined by qRT-PCR, * p<0.05. B. Representative flow cytometry plots of MDSCs after MALAT1 siRNA or negative control transfection. C. Comparison of the proportion of CD33+MDSCs in PBMCs after MALAT1 siRNA and negative control transfection, * p<0.05. 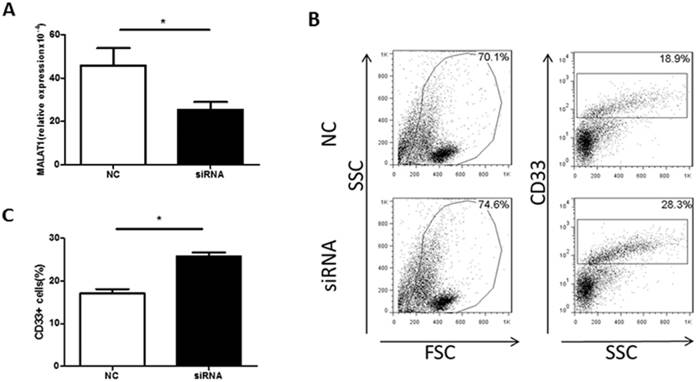 It is well-known that MDSCs are divided into two groups: granulocyte MDSCs (G-MDSCs) and mononuclear MDSCs (M-MDSCs). While G-MDSCs produce high levels of ROS and low levels of NO, M-MDSCs conversely produce low ROS and high NO. Both G-MDSCs and M-MDSCs secrete ARG-1[22]. Our experiments analyzed the average fluorescence intensity of ARG-1 in MDSCs by flow cytometry. We observed that ARG-1 levels in patients with lung cancer were significantly higher than those of healthy controls. Recent data suggest that there is a close association between the availability of arginine and the regulation of T-cell proliferation[2, 23]. Moreover, COX-2 inhibitors downregulate the expression of ARG-1 by MDSCs, enhancing antitumor T-cell responses and increasing the therapeutic efficacy of immunotherapy[23-25]. Consistent with previous reviews, our results indicate that in lung cancer patients, elevated expression of ARG-1 in MDSCs increases immunological inhibition of T cells.

CD4+T cells and CD8+T cells play important roles in the body's response to tumors. CD4+T cells assist CD8+T cells, NK cells or macrophages to kill tumors by secreting Th1 cytokines. CD8+T cells can directly kill tumor cells by secreting perforin and granular enzymes. Our study showed that there was no obvious alteration of Th1 cells in PBMCs isolated from lung cancer patients compared to healthy controls, but CTL cells in cancer patients were significantly less abundant than in the controls. These results suggest that CTL cells may play a major role in adaptive immune responses to lung cancer. In addition, we observed a negative correlation between the proportions of CTLs and MDSCs in lung cancer. Therefore, we speculate that MDSCs primarily promote tumor development by inhibiting CTL production, thereby exerting immunosuppressive functions in the development of lung cancer.

Recent studies have shown that lncRNA MALAT1 is closely related to lung cancer, cervical cancer, colorectal cancer and liver cancer. Garen and Song demonstrated that overexpression of MALAT1 reduces the function of the tumor suppressor PSF[26]. Schmidt et al. also showed that MALAT1 is abnormally overexpressed in non-small cell lung cancer (NSCLC) tumor cells or tumor tissues[27]. However, several reports have shown low expression of MALAT1 in the peripheral blood of lung cancer patients[28], which is in contrast to the high expression observed in tumor tissues, and the mechanism behind this discrepancy is unclear. Our results showed that the relative expression of MALAT1 in PBMCs of lung cancer patients was significantly lower than that of healthy controls. In addition, two previous experimental studies have demonstrated a negative correlation between the abundance of MDSCs and CTLs in PBMCs from lung cancer patients. As such, we wondered whether MALAT1was also associated with MDSCs and CTLs. Our results showed a moderately negative correlation between the level of MALAT1 and the proportion of MDSCs in PBMCs from patients with lung cancer but with no direct correlation with CTLs. We thus speculated that MALAT1 may have a direct role in regulating the differentiation of MDSCs. We designed a MALAT1 siRNA to transfect PBMCs and established a MDSC-inducing culture system. The proportion of MDSCs was significantly increased after PBMCs were transfected with MALAT1 siRNA. These results show that knockdown of MALAT1 increases the quantity of MDSCs by regulating their differentiation.

Our data suggest that MALAT1 plays a direct role in regulating MDSCs expansion, which provides a new understanding of lung cancer development and offers potential targets for auxiliary diagnosis and treatment in lung cancer.

The study was approved by the respective Ethics Committee of the Affiliated People's Hospital of Jiangsu University. Written informed consent was obtained from all the subjects in accordance with the Declaration of Helsinki.