The emergence of long non-coding RNAs in hepatocellular carcinoma: an update

Hepatocellular carcinoma (HCC) accounting for roughly 90% of all primary liver neoplasms is the sixth most frequent neoplasm and the second prominent reason of tumor fatality worldwide. As regulators of diverse biological processes, long non-coding RNAs (lncRNAs) are involved in onset and development of neoplasms. With the continuous booming of well-featured lncRNAs in HCC from 2016 to now, we reviewed the newly-presented comprehension about the relationship between lncRNAs and HCC in this study. To be specific, we summarized the overview function and study tools of lncRNAs, elaborated the roles of lncRNAs in HCC, and sketched the molecule mechanisms of lncRNAs in HCC. In addition, the application of lncRNAs serving as biomarkers in early diagnosis and outcome prediction of HCC patients was highlighted.

Hepatocellular carcinoma (HCC) accounts for roughly 90% of all primary liver neoplasms, and is the sixth most frequent neoplasm and the second prominent reason of tumor fatality worldwide [1]. The highest morbidity of HCC has been found in China and the Asia-Pacific area, which accounts for >50% of HCC cases in the world [2]. Meanwhile, liver cancer is fatal in both developed and developing countries, with the 5-year overall survival rate generally lower than 20% [3]. HCC is the sole solid neoplasm that could be cured by liver transplant which can simultaneously heal the neoplasm and latent cirrhosis, and which is not influenced by the extent of liver function impairment [4]. However, the extreme shortage of liver donors results in procrastination before transplantation, and increasing the risk of tumor progression, and transplantation failure during this period [5]. These suggested that HCC is a devastating disease with disappointing outcomes and limited therapeutic options. Similar to other cancers, HCC is characterized by the gradual accumulation of genetic and epigenetic changes [6-8]. Among these alterations, long non-coding RNAs (lncRNAs) play crucial roles in the initiation and progression of HCC.

LncRNAs are transcripts with more than 200 bp in length, and have incrementally been recognized as the emerging star in neoplasm study as their essential function in tumor biology [9-11]. These transcripts are lack of the protein-coding potential in general and are particularly ubiquitous in almost whole livings [9]. LncRNAs have emerged as regulators in diverse biological processes [12-14] containing cellular proliferation, differentiation, motility, invasiveness, survival and so on [15-17]. Mounting evidences have demonstrated that lncRNAs are involved in tumor onset and development [18, 19], and their expression is frequently deregulated in cancers [20-27]. LncRNAs are strikingly cell type-specificity and cancer type-specificity in expression which are relatively stable [18, 28]. Therefore, lncRNAs stand a chance to serve as a kind of desired indicators with underlying utilizations in neoplasm divination, early-discovery, classification and treatment.

With the continuous booming of well-featured lncRNAs in HCC from 2016 to now, a great quantity of newly-presented researches is coming into being on the relationship between lncRNAs and HCC. Here, we reviewed the present comprehension of lncRNAs in HCC. To be specific, we summarized the overview function and study tools of lncRNAs, elaborated the roles of lncRNAs in HCC, and sketched the molecule mechanisms of lncRNAs in HCC. Meanwhile, the utilization of lncRNAs as markers in HCC early-diagnosis and outcome prediction was also highlighted.

Tools for the research of lncRNAs

A mounting number of databases about lncRNAs are developed to assist in the research of lncRNAs that include the functions of lncRNAs under the physiological state and pathological conditions. Over twenty databases touching upon the biological properties of lncRNAs are outlined in Table 1. These databases will dramatically facilitate a better understanding of lncRNAs which are essential members of epigenetic regulation, and their interaction with other RNAs.

Dysregulation and roles of lncRNAs in HCC

HCC is a complicated disease referred to multiple factors. A growing body of evidence suggested that lncRNAs involved in the occurrence and development of diverse neoplasm containing HCC. Importantly, some could affect the features of neoplasm, including proliferation, apoptosis, motility, invasiveness and angiogenesis. As an example, HOTAIR expression levels increased in both HCC tumor tissues and HepG2 cells, which promoted HCC progression [29] and were bound up with earlier relapse [30, 31]. Those showed the importance of HOTAIR in the evolvement and the relapse of HCC. Furthermore, lncRNAs could be involved in tumor progression and had potential to serve as an attractive target for precision therapy in HCC.

It is well known that invasiveness is an origin in worse disease prognosis and higher recurrence of neoplasm patients [32], which was partly correlated with certain behaviors of cancerous cells. Studies have showed that lncRNAs were related to vital growth-boosting properties and their deregulation dedicated to the survival of cancerous cells. LINC00052 [33], ZEB1-AS1 [34] and LINC01225 [35] was showed to accelerate cellular motility and invasiveness. In short, these lncRNAs could function as oncogenes via facilitating invasion and metastasis of HCC cells. Inversely, it was indicated that CPS1-IT1 [36], lncRNA XIST [37] and lncRNA FTX [38] were down-regulated in HCC samples and inhibited the relapse and metastasis of HCC cells. These lncRNAs act as tumor suppressor genes via restraining invasion and metastasis in HCC.

A flood of literatures have mirrored that lncRNAs participated in the development of HCC via modulating cell proliferation and apoptosis. On the one aspect, some lncRNAs could accelerate cell proliferation while inhibit cell apoptosis in HCC. It was demonstrated that the expression of XIST [39], lncRNA HOST2 [40], HOXA-AS2 [41], CCHE1 [42] and AFAP1-AS1 [43] was significantly elevated in HCC tumor tissues and/or cell lines, which promoted cell proliferation while protected cells from apoptosis in HCC. Conversely, lncRNA AK058003 [44], lincRNA-p21 [45] and lncRNA XIST [37] were revealed to decrease in HCC tumors, and act as a tumor suppressor, suppressing HCC cellular multiplication and clonality while accelerating cellular apoptosis. These results suggested that lncRNAs played important roles in proliferation and apoptosis of HCC and may serve as latent therapeutic targets of HCC.

LncRNAs have also been reported to function in chemo-sensitivity or radio-resistance through arrest of cell cycle, suppression of apoptosis as well as strengthening of DNA injury repair [46, 47]. For instance, lncRNA TUC338 [48] and MALAT1 [49] was involved in HCC evolution and drug-resistance (such as sorafenib). These suggested that lncRNAs have the potential to serve as new targets for exploiting novel strategies of chemotherapy and radiotherapy in HCC patients.

Molecular mechanisms of lncRNAs in HCC

LncRNA HNF1A-AS1 repressed NKD1 and p21 expression via interacting with EZH2, and then promoted HCC cell proliferation [57]. LncRNA NEAT1 modulated hnRNP-A2 level to facilitate cellular multiplication and invasiveness in HCC cell lines [58]. LncRNA TUC338 targeted RASAL1 to be involved in sorafenib-sensitized HCC cells [48]. LncRNA BANCR elevated the protein level of VIM while lowered the protein content of E-cad to cripple cellular malignant degree [59]. The lncRNA EGFR-AS1, a target of GHR, up-regulated the expression of EGFR in HCC [60]. To summarize, lncRNAs-proteins interactions functioned as a vital mechanism of lncRNAs in HCC.

LncRNAs functioned vitally in a variety of biology processes. Frequently, the occurrence and development of neoplasm frequently was attributed to the interaction effects of some lncRNAs. LncRNA-lncRNA synergistic networks were beneficial to explore clinically related lncRNAs in neoplasm [70]. Reports suggested that LncRNA HULC cooperated with MALAT1 to promote CSCs proliferation in HCC [71]. And the overexpression of HULC along with MALAT1 increased the binding of RNA pol II, P300, CREPT to TRF2, which triggered the upregulation, phosphorylation and SUMOylation of TRF2 [71]. Indeed, lncRNAs could interact with other lncRNAs.

Autophagy is a cellular degradation pathway that is essential to maintain cell physiology progress, and its disruption leads to multiple diseases in humans [72]. Recently, macro-autophagy/autophagy has emerged as a promising therapeutic target in various types of solid tumor treatment [73]. LncRNAs exerted crucial roles in the regulation of autophagy lately, which made them act as potential biomarkers of disease phenotypes [74]. LncRNA HULC could induce a protective autophagy [75]. LncRNA HNF1A-AS1 served as a autophagic accelerator in HCC [76]. And the lncRNA HOTAIR activated autophagy [30]. These studies indicated that the lncRNAs-autophagy networks are likely to supply additional insights into treatment interventions and markers evaluation in human diseases, especially in cancers.

As we all know, signaling pathways functioned considerably in the development of HCC and presented some therapeutic strategies based on in vivo and in vitro findings. LncRNA T-UCR severed as a potential growth driver gene modulated by the Wnt/β-catenin signaling in hepatobiliary carcinogenesis [77, 164]. LncRNA MEG3 could activate ER stress and p53 signaling related to NF-κB pathway, which followed by suppressing cell multiplication and promoting apoptosis [78]. Lnc-DILC was downregulated in liver cancer stem cells and mediated intrahepatic inflammation via governing the cross-linking of TNF-α - NF-κB pathway with IL-6 - STAT3 pathway [79].

Transcription activity and post-transcription mechanisms involved in lncRNAs could modulate ribonucleotide reductase followed by altering the stability of message RNAs [80]. In turn, mRNA steady state levels could directly influence their expression [80]. The lncRNA MALAT1 accelerated arsenite-induced glycolysis, which was mediated via HIF-1α mRNA stabilization in human liver L-02 cell lines [81]. LncRNA AK058003 could reduce the expression of mRNA stabilizing protein HuR and act as a precursor of miR-15a to suppress γ-synuclein-mediated cell proliferation and the metastasis of HCC [44]. In addition, lncRNA HULC triggered autophagy via stabilizing Sirt1 and attenuated the chemosensitivity of HCC cells [75]. These studies suggested that some lncRNAs participating biological processes may be mediated by selective stabilization of mRNAs.

LncRNAs for diagnosis of HCC

A growing amount of evidence supports that benefiting from their attractive characteristics, lncRNAs are potential indicators for human diseases including HCC. The majority of lncRNAs displayed the trait of strict tissue-specific and neoplasm-specific expression. Frequently, distinct upregulation or downregulation of lncRNA was found in neoplasm tissues in comparison with normal samples. Meanwhile, a few lncRNAs were declared to be existed in urine, blood and other body fluids, which could be easily acquired through the non-invasive way as much as possible. What's more, utilizing lncRNAs as indicators of neoplasm states was superior to protein-coding RNAs, due to the more representative expression of lncRNAs [82]. Compared with current varying greatly biomarkers in protein coding genes, lncRNAs are likely to be advantageous indicators on the strength of their specificity and easy acquirement.

The pooled sensitivity and specificity of HCC patients predicted by lncRNAs were showed as Table 2. These lncRNAs are likely to act as valuable indicators for neoplasm diagnosis and have potential application value for clinic diagnosis of HCC patients.

LncRNAs as prognostic biomarkers for HCC

Accumulating reports declared that lncRNAs have potential to serve as prognostic predictors in neoplasms containing HCC patients. A variety of lncRNAs were demonstrated to exhibit abnormal expression in HCC, which were significantly correlated with the survival time and were independent outcome predictors in HCC patients (Table 3). Therefore, lncRNAs might be acted as potential and useful prognostic indicators in HCC.

Yet, the precise biological function and molecule mechanisms of lncRNAs in HCC remained uncharacterized. Thus, further exploration and validation researches are required for illuminating the intricate mechanisms (especially in epigenetic and transcriptional modulation of lncRNAs) as well as the clinical utilizations of lncRNAs in HCC.

Dysregulation and functional roles of lncRNAs in hepatocellular carcinoma. 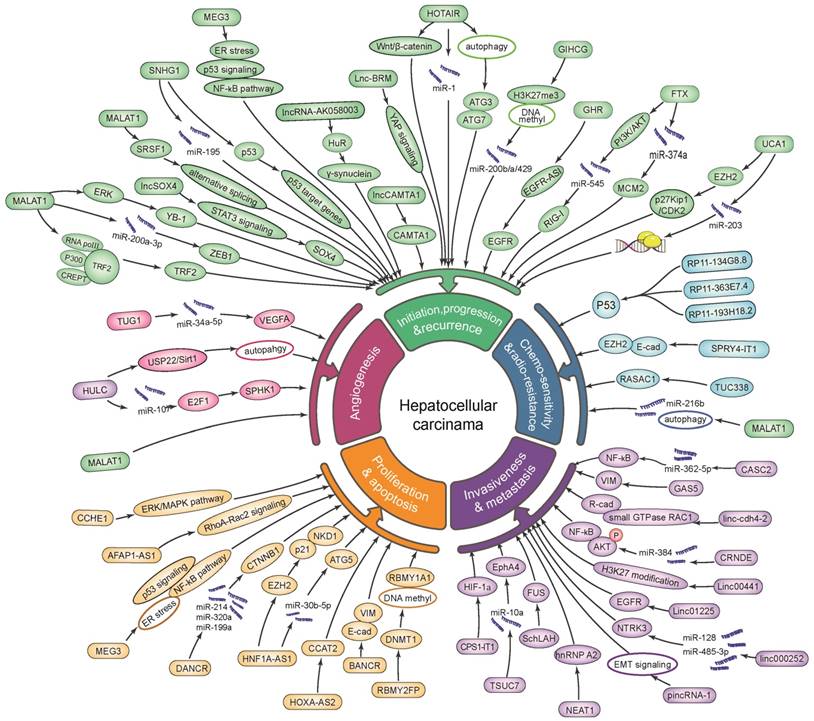 Application as diagnostic index of lncRNA in hepatocellular carcinoma patients