Colorectal cancer is the 5th most common cancer in morbidity and mortality in China according to Globocan 2012 [1, 2]; while approximately 40% of the patients would be diagnosed as rectal cancer. Among them 49.9% have been diagnosed as Duck B stage, 33.9% as Duck C [3]. Meta analysis of CONCORD-2 has been shown that the 5-year survival from colon and rectal cancers has increased steadily to 60% and higher in 22 developed countries especially for those diagnosed during 2005-09 [4].

Neoadjuvant chemoradiotherapy (neo-CRT) in combination with total mesorectal excision (TME) followed by adjuvant chemotherapy has been considered as the standard of care for patients with locally advanced rectal cancer. Clinical researches have been shown that the application of neo-CRT can shrink tumor, reduce local tumor recurrence, increase sphincter-perservation and further improve the prognosis and quality of life while not increase surgical complications and sequelae in this cohort of patients[5]; hence neo-CRT have been widely applied in the management of locally advanced rectal cancer.

It has been reported in the literature that 18.1 to 30.2 percent of patients with locally advanced rectal cancer may achieve pathologic complete response (pCR) after neo-CRT which leads to a better clinical prognosis [6-9]. Patients with locally advanced rectal cancer have been shown to present different treatment response to neo-CRT ranging from pCR to resistance to neo-CRT; whereas pathological TNM stage has been reported to be of prognostic significance in treatment outcomes after neo-CRT when compared to clinical TNM stage. Bujko et al. [10] have reported that prognostic effect of adjuvant chemotherapy in patients with ypT0-4 N0 disease after Neo-CRT and TME is not convincing, suggesting that adjuvant chemotherapy should be given individually according to pathological TNM stage. We have reported that the pCR rate was achieved in 24.8% of 210 patients who were demonstrated with better prognosis when compared with those with advanced pathologic T and N stage treated with neo-CRT and TME [6].

The purpose of the study was to explore clinical characteristics which could be applies to predict treatment response especially pCR to neo-CRT in patients with locally advanced rectal cancer who were treated with neo-CRT and TME.

Preoperative radiotherapy (RT) was performed with three-dimensional conformal radiation therapy (3D-CRT) in 240 patients (80.8%) and intensity modulated radiation therapy (IMRT) in 57 patients (19.2%) with 6-8 MV X-ray. The target volume definition was followed by the recommendations of International Commission of Radiation Units report 50. The delineation of clinical target volume (CTV) included primary rectal cancer, both ends of the affected rectum, the surrounding tissues of the affected rectum, the mesorectal area, the presacral lymph nodes, the obtrurator lymph nodes, and the iliac lymph nodes. For patients with stage T4 rectal carcinoma with bladder or prostate involvement, the delineation of CTV also included external iliac lymph nodes.

The planned target volume (PTV) was designated as 5-10 mm margin from the CTV. The dose prescription was as follows: 100% of the prescription dose covered at least 95% volume of the PTV; 95% of the prescription dose covered 100% volume of the PTV. The reference point was set as the intersection of the central axes of the three or four beams for 3D-CRT or five beams for IMRT. The median radiation dose to PTV was 46.0 Gy (ranging from 30.0 to 50.0 Gy), 2 Gy per fraction, 5 fractions per week. The dose to the OARs was aimed to be as low as possible and must at least comply with the following constraints: bladder of 50 Gy in <50 % volume; Dmean of small bowel < 46 Gy, small bowel of 50 Gy in <5 % volume.

Treatment response including tumor regression response to neo-CRT was investigated according to the clinical characteristics including age, gender, tumor distance from anus, serum CEA, hemoglobin levels before treatment and clinical TN stage were used to investigate association with pCR after neo-CRT.

All statistical analyses were performed using SPSS v17.0 software. The receiver-operating characteristic curve (the ROC curve) was applied to obtain a boundary value of pre-serum CEA to determine the correlation to pCR. Chi-square test was utilized to analyze clinical factors associated with pCR. Logistic regression was applied to analyze clinical factors associated with pCR. Uni- and multi-variate analyses of the prognostic factors were performed using Cox proportional hazard models. p value of <0.05 was considered to be of statistical significance.

The total mesorectal excision was performed at 45 days (range: 20-142 days) after completion of neo-CRT. All patients were operated on R0 resection with Dixon procedure in 159 patients (53.5%), Miles procedure in 129 patients (43.4%) and Hartmann procedure in 9 patients (3.0%). The detailed surgical procedures are also shown in Table 1.

Evaluation of treatment response to neo-CRT

Correlation of the baseline CEA level with pCR after neo-CRT

The cut-off of pre-treatment CEA level to predict pCR was 5.33 ng/ml using ROC curve calculation. Area under the ROC curve was 0.675 (0.608 to 0.742), prompted use pre-treatment CEA to predict the pCR has certain accuracy. As shown in Fig. 1, the probability to achieve pCR after neo-CRT for patients with baseline level of CEA <5.33 ng/ml or ≥5.33 ng/ml was 36.5% and 13.8%, respectively, in which the difference is statistically significant.

The correlation between pathologic complete response (pCR) and pre-CEA level determined by the ROC curve. 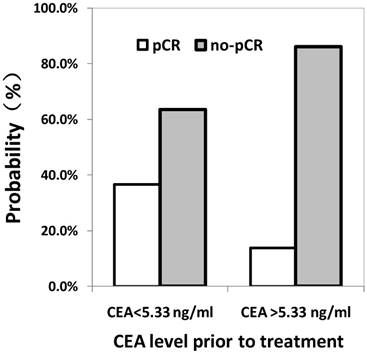 Uni- and multi-variate logistic analyses of clinical predictors for pCR

The relationship between the pathologic complete response (pCR) and the clinical T stage. 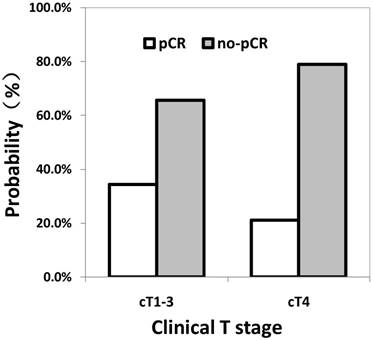 The present study has been shown that 26.6% of the patients with locally advanced rectal cancer have achieved pathologic complete response when they were treated with neo-CRT followed by TME. Pre-treatment serum CEA level and clinical T stage were strongly associated with pCR for this cohort of patients treated with neo-CRT followed by TME which could be used as clinical predictors for pCR.

Given that the postoperative pathological stage after neoadjuvant chemoradiotherapy was an important predictor for prognosis, postoperative adjuvant therapeutics would be recommended according to the response of rectal cancer to neo-CRT. We and other researchers [13-15] have demonstrated that pathological TN stage was strongly associated with treatment outcome for those who were treated with neoadjuvant chemoradiotherapy followed by total mesorectal excision, especially for those with pCR after neo-CRT could achieve a better prognosis. For example, a wait-and-see strategy could be applied in patients with stage ypT0N0 rectal cancer [16]; intensified adjuvant chemotherapy could be applied in patients with stage ypT3-4/N+ colorectal cancer. Whereas the ability to monitor pCR patients after neo-CRT before radical surgery would significantly impact subsequent management. Patients who would achieve pCR after neo-CRT may be recommended to have local excision or wait-and-see treatment strategy to avoid radical surgery-related sequelae and complications.

Rodel et al [22] have reported that 4 out of 16 patient (25%) with clinical T2 rectal cancer achieved pCR after neo-CRT, while 27 out of 268 patients (10.1%) with clinical T3 disease achieved pCR and none of 27 patients with T4 disease achieved pCR. The authors have postulated that the tumor volume was related to its sensitivity to radiation and chemotherapy, and that there might exist a certain correlation between tumor volume and clinical stage. The present study has shown that patients with clinical T1-3 rectal cancer would have higher probability to achieve pCR after neo-CRT than those with T4 disease (34.4% vs 21.1%). We may hypothesize that higher T staging prior treatment meant heavier tumor burden, while the higher radiation dose or more intense chemotherapy may be needed to achieve a better curative effect.

Due to relative small sample size, we combined T1, T2 and T3 altogether to investigate the relationship between T stage and pCR to neo-CRT. Uni- and multi-variate analyses have demonstrated that clinical T stage and pre-treatment CEA leve ≤5.33 ng/ml were significantly related to pCR after neo-CRT for patients with locally advanced rectal cancer. It is important to design a prospective clinical trial to further study whether clinical T stage and pre-treatment CEA level are correlated with pCR to neo-CRT in patients with locally advanced rectal cancer.

In conclusion, our research has demonstrated that clinical stage and pre-treatment CEA level before treatment are independent predictive factors for patients with locally advanced rectal cancer to achieve pathologic complete response after neo-CRT followed by total mesorectal excision. The role of pre-treatment serum CEA level and clinical T stage to predict pathologic complete response to neo-CRT is needed for further evaluation.

This work was partly funded by National Natural Science Foundation of China (No. 81673088).